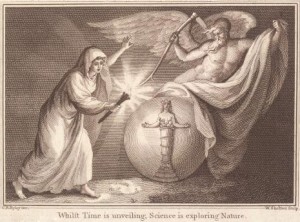 In the early 19th century, Mary Somerville was a celebrity scientist. One of her works was the best-selling science book of the time, until overtaken by Darwin’s On the Origin of Species. She published on astronomy, biology, atomic theory, and physical geography, at a time when scientific publications by women were rare. She tutored the computing pioneer Ada Lovelace, and introduced Lovelace to Charles Babbage.

Somerville’s name lives on, not least in the Oxford college named in her honour, yet not many people today know of her achievements. One reason is that it is hard to find her works. Her publications have been digitised, but the digitisation process only created images – rather than text, which is easy to find, search within and quote.

On 12 October, a group brought together by University of Oxford IT Services and the Bodleian Libraries started to change that. Working together on Wikisource, a sister-project of Wikipedia, we published a definitive transcription of a Mary Somerville paper from 1826. Being totally open access, the paper incidentally now meets modern funders’ requirements for scientific research outputs.

We also began that day a transcription of Somerville’s Preliminary Dissertation on the Mechanisms of the Heavens; a book described by the astronomer John Herschel as ‘by far the best condensed view of the Newtonian philosophy which has yet appeared’. The transcription was finished this month, and it and other texts are available through Somerville’s Wikisource profile.

This event was just one of a larger programme celebrating the bicentenary of Ada Lovelace. They involved Oxford staff, interested public and experienced Wikipedians, a couple of whom participated remotely. We were lucky to have two excellent guest speakers in Prof Ursula Martin and Prof Sylvia McLain. Each event improved a different aspect of open knowledge about women’s achievements in science and related fields.

In the edit-a-thon and improve-a-thon, we created 8 Wikipedia articles about notable women scientists — some living, some historic — and improved a further 16 existing articles. Creating an article from scratch can be a time-consuming process, but fixing clumsy wording or adding a cited fact is relatively quick.

Wikipedia’s new visual editor works like a word processor, so new users can write or improve articles without having to learn wiki code. We found that this makes Wikipedia editing much quicker to learn, quicker to do, and hence more enjoyable.

Our goal was not just to write biographies but to improve the web of knowledge to fairly represent women’s achievements. Amongst the non-biography articles we improved were those on Mary Somerville’s bestseller On the Connexion of the Physical Sciences and on the Finkbeiner test — important reading for anyone who writes about women scientists!

The 4th workshop was an image-a-thon, looking at Wikipedia’s sister project, Wikimedia Commons, and at some images of women scientists not yet used in Wikipedia. We also uploaded images from copyright-free sources, improving a total of 20 Wikipedia articles.

A call for material for the image-a-thon drew responses from private collections and cultural institutions. Among the contributions from The John Johnson Collection of Printed Ephemera is the accompanying illustration from a museum ticket, which now illustrates the Women in science article.

The records of what we did, including the articles edited, images uploaded and feedback are all openly available. More importantly, the process is ongoing. There are more articles that need expanding, re-wording, illustrating, or creating and anyone can join in: see the project pages for more details.

We will keep in touch with the participants and hope they continue as Wikipedians. The feedback from participants includes, ‘I found the session really useful and fun’ and ‘found it a very rewarding and useful experience and would like to continue contributing’ among similar comments, indicating that for some, we have started a habit.

One thought on “Somerville, science and wikipedia”