These disks are double sided, but with each side remaining independent. This means that single-sided disk drives can still read both sides by flipping the disk. Because the two sides are independent of each other they are labelled either ‘A’ and ‘B’, or ‘1’ and ‘2’ to help distinguish between them. Each side also had a dedicated write-protect hole, which may be implemented differently from manufacturer to manufacturer. 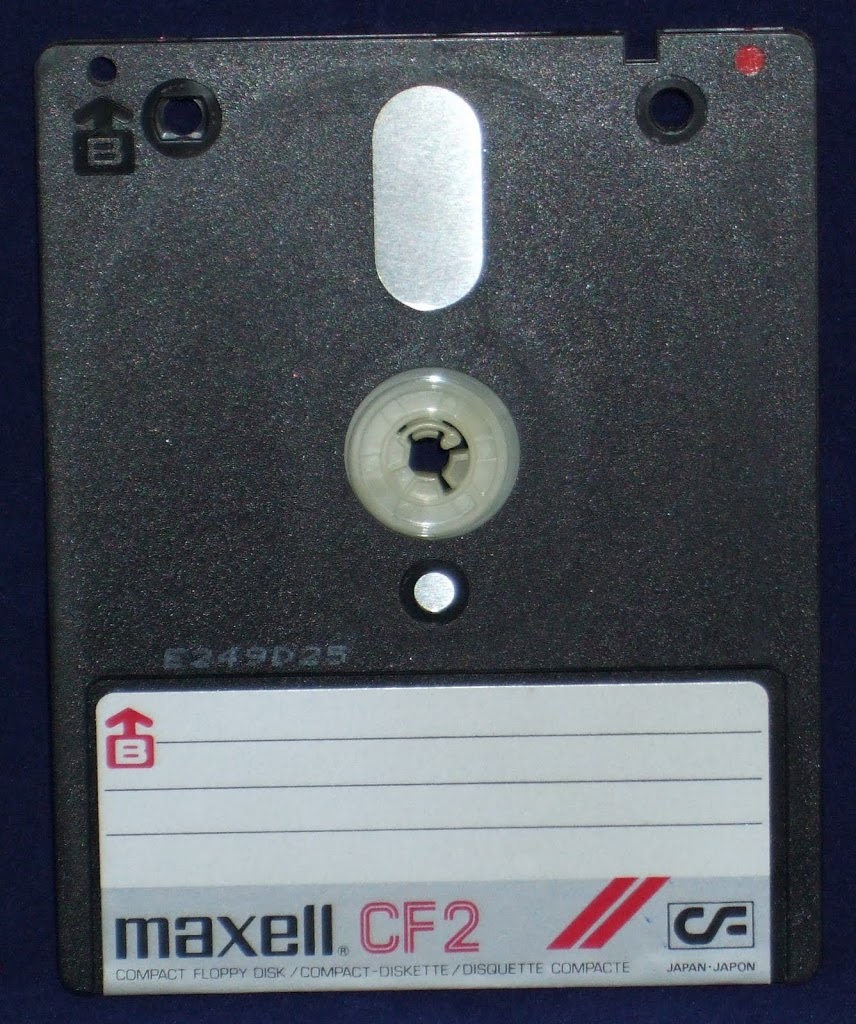 3” disks are commonly labelled either CF2 (single density) or CF2DD (double density). However, if a disk has no label the density can be determined using the CP/M programme called ‘Disckit’

The CP/M operating system was used by Amstrad and other computers with 3 inch disk drives, hence 3 inch disks most commonly contain the CP/M file system.

3” disk drives were most common on Amstrad computers. The first model, the PCW 8256 had one single sided drive. The later model, PCW 8512, had two drives placed one on top of the other to the right of the monitor screen. The upper drive remained single sided, whereas the lower was double sided and double density. The ZX Spectrum +3 also used the same SS drive as the Amstrad 8256.

5.25” disks are physically very similar to 8 inch disks, just at a reduced scale. 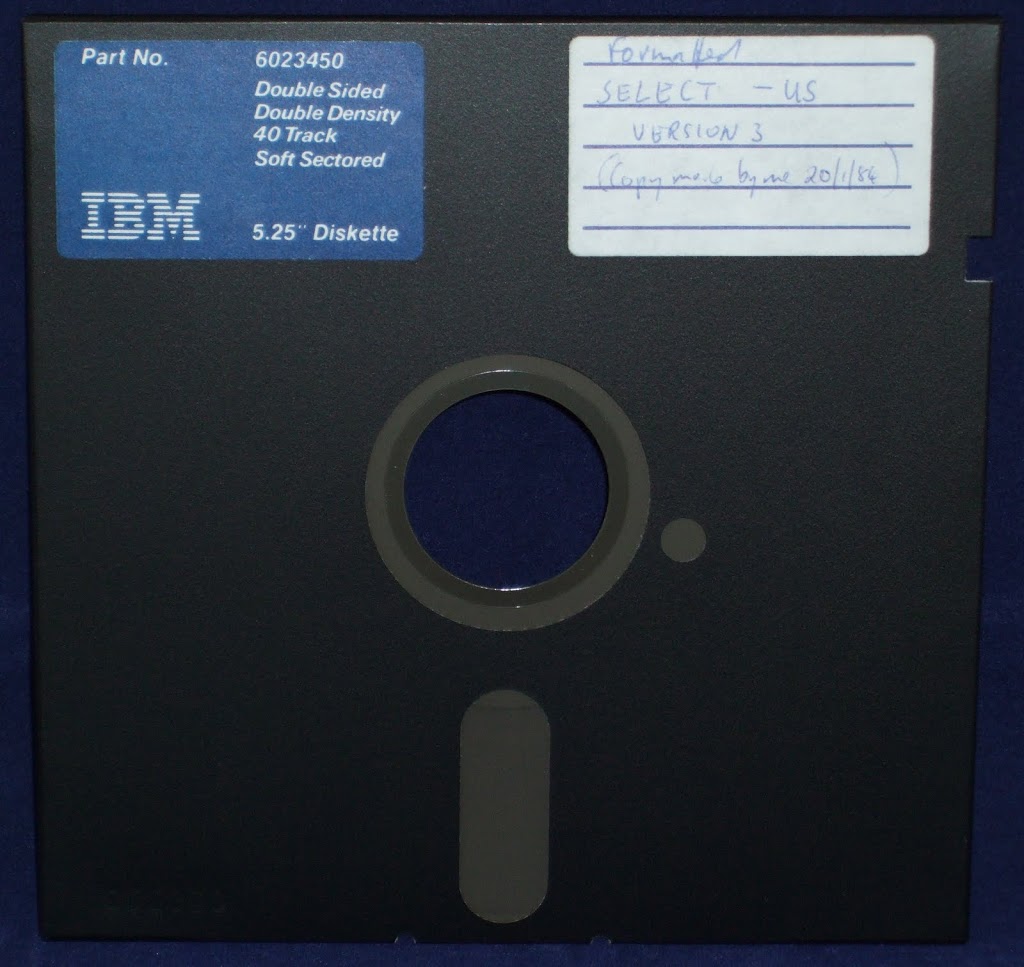 The only way to visually distinguish between SS and DS 5.25” disks is by reading the labels, if there are any. However, users realised they could extend the capacity of a single sided disk by cutting a second write-enabled slot and index hole into the plastic cover. By flipping the disk over and inserting the disk this way a user could use the other side of the disk. These were known as ‘flippy disks’ and any disk adapted in this way can be identified as a manufactured single sided disk customised to become double sided. Users can also customise disks to make them read-only by covering the write-enabled slot (on the top right side in the image) with tape such as masking tape.

Reading the label is also the only way to visually distinguish between HD and DD disks. If nothing is written on the disk, the possible disk types can be narrowed down if the creation date is known. This is not always a very accurate method, but if a disk pre-dates the introduction of a format this can help identify it. For example, HD disks were not available until 1984, therefore a disk from 1980 cannot be HD.

The other option is to identify the density based on the disk capacity. This is easily achieved with Windows operating systems. Connect the 5.25” floppy disk drive to a computer running Windows and insert the floppy disk. Open the file manager, right click on the floppy drive icon and select properties. A new window will open which states the disk capacity as well as the amount so far used by the disk.

There are various possible file formats that are compatible with 5.25” floppy disks, though compatibility depends on the low level format of a disk and the computer drive it is intended for.

CP/M: Found on some 5.25” disks intended for use with CP/M operating system. As MS-DOS gained popularity it supplanted CP/M, which then rapidly declined from 1981.

File Allocation Table 12 (FAT12): FAT was, until 2000, the file system of choice for MS-DOS and Microsoft Windows. FAT12, the first FAT version introduced in 1977, was designed specifically for floppy disks and replaced CP/M as the most common file system found on floppy disks, particularly FM and MFM encoded ones.

Disc Filing System (DFS): Designed in 1982 by Acorn Computers Inc. for their 5.25” floppy disk drives. This uses FM encoding, therefore only produces single density disks. A double density disk can be formatted to use DFS, but this would render it single density.

Early 5.25” drives could only read one side, regardless of what type of disk was inserted and double sided drives were not available until 1978.

Disk II was the first floppy disk drive to be used by Apple for their Apple II microcomputers. This drive was single sided, but supported flippy disks. In 1984 the Apple IIc was the first to include a built in floppy drive, the Disk IIc.

Computers running PC-DOS and MS-DOS were slower to incorporate 5.25” disk drives, the first not being included until 1981 and that was only a single sided drive. Double sided floppy disk drives were included from 1982 onwards with the release of version 1.1 of MS-DOS.

The first 3.5” disks were SS, but DS disks quickly became the standard after being introduced. Aside from it being stated on the label there is no visual way to determine which a disk is.

Some disks state the density on the disks themselves, either writing the words or using acronyms. If nothing is written there can still be clues to help distinguish the disk type. For instance, after the introduction of HD it became possible to format DD disks to HD by cutting or punching a hole in the bottom right hand corner. Special square hole-punchers were available for this purpose and disks would include a square indent where the hole should be, as can be seen in the image below: 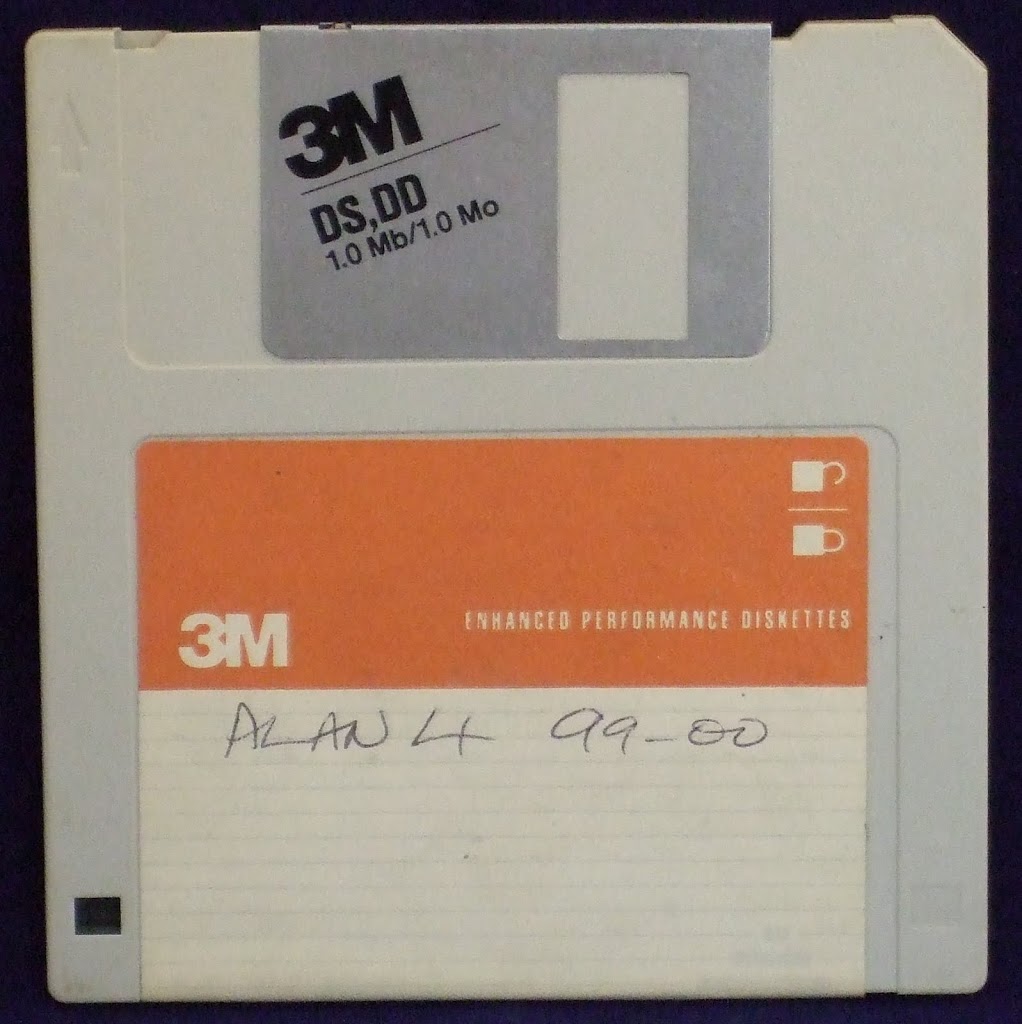 Macintosh File System (MFS): Created by Apple Inc. and introduced along with their Macintosh 128K computer in 1984. It can be used with Apple’s 400K 3.5” disks, but cannot support the 800K disks. From the Mac OS 8.1 onwards (1998) Apple computers were no longer able to use MFS.

Hierarchical File System (HFS): Developed by Apple in 1985 as a revised version of MFS. An an improved version, HFS+ was introduced in 1988. Like MFS, HFS is only compatible with Macintosh operating systems.

DFS: Early Acorn 3.5” disks were formatted to use DFS, but this was later replaced with Advanced DFS.

Extended File System (ext): ext was created in 1992 specifically for Linux systems and was replaced by ext2 in 1993.

To find out which file system is in use on a 3.5” floppy disk using Windows XP insert the disk in the floppy drive and open ‘My Computer’. From here right click on the floppy drive icon and select ‘Preferences’. This will open a screen displaying disk data including the file system.

Apple’s range of Macintosh computers were separate from the Apple range and had their own disk drives. The first Macintosh computer, Macintosh128K introduced in 1984, uses a 400K Macintosh External Disk Drive which is single sided. Subsequent computers use the double sided 800KB External Disk Drive. In 1985 Apple released the Apple UniDisk 3.5 drive for the Apple II. This increased capacity to 800K, but was never very popular with Apple II users as most software was still released on 5.25” disks to accommodate older Apple II machines. Despite being very similar to the Macintosh drives the two are incompatible. However, in 1986 Apple introduced the Apple 3.5” Drive, a cross-platform floppy disk drive that is compatible with both Macintosh and Apple computers. This was part of an overall strategy to unify Macintosh and Apple manufacturing.

Despite using both GCR and MFM encoding methods, the first Commodore to read 3.5” disks was the Commodore 1581, which read only MFM encoded disks.

The first IBM model to include a 3.5” drive as standard was the IBM PS/2 in 1987, though 3.5” drives could be found on later versions of the IBM AT. Initial IBM PS/2 drives only supported double density disks, but later models included support for high density disks. MS-DOS 3.2, introduced in 1986, was the first operating system to natively support 3.5” disk drives, up to double density capacity. HD support was included in MS-DOS 3.3 (1987) and ED compatibility came with MS-DOS 5 in 1991.