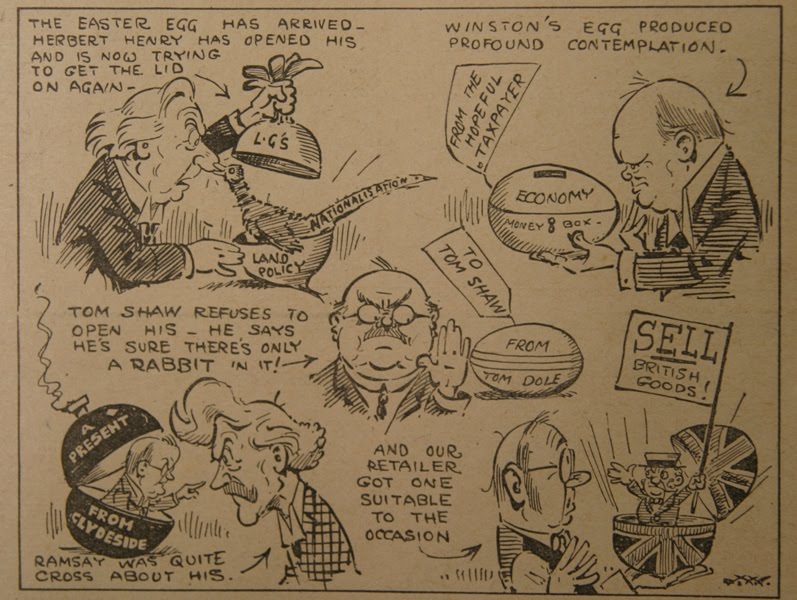 Happy Easter from the Conservative Party Archive! We recently uncovered this cartoon in our archives and thought it would make a timely post, given its assortment of political Easter eggs.

A bit of background for our readers…The cartoon was published in the Conservative Party monthly magazine The Man on the Street in April 1926. At that point, the nation was one month away from the General Strike and full of worries about Socialism, trade, and – as always – the economy.

The cartoon portrays various politicians confronting their own political issues. In the top left corner, Lord Asquith struggles to put a lid on David Lloyd George’s land policy, which advocated increased nationalisation. Opposite Asquith, Winston Churchill, then Chancellor of the Exchequer, wrestles ongoing budget problems. With the 1926 budget, Churchill introduced a betting tax, while his previous budget restored the Gold Standard.

In the middle of the cartoon sits Tom Shaw. In 1924, Shaw’s House of Commons colleagues pressed him for answers regarding provisions for unemployment; Shaw commented, “Does anybody think that we can produce schemes like rabbits out of our hat?” (see Hansard for 10 March 1924). The remark became a favourite of political cartoonists (and MPs), and he was rarely pictured in The Man in the Street without a rabbit or two.