The election on 6th May saw the arrival of an historic Conservative-Liberal Democrat coalition government in office. But how unprecedented was this? Are the Conservatives and Liberal Democrats as unlikely bedfellows as most critics appear to suggest? Files in the Conservative Party Archive show that the Conservatives and the Liberals were certainly no strangers to collaboration in the past. Gleanings & Memoranda looks back to the 1950s for which there are numerous documented examples of the two parties working together across the country in an attempt to keep the Labour Party from power.

Labour’s 1945 landslide brought about a profound sea-change in the political landscape, with many Liberals and Conservatives seeing the urgent task being to form an anti-Socialist bloc; indeed, Churchill was its biggest proponent, addressing the National Union Executive on the possibility of electoral reform and even a change in the Party’s name as early as July 1946 [Ramsden – The Age of Churchill and Eden, 1940-1957, p. 198]. The Liberals were particularly weak after 1945, which saw the return of only 23 MPs, 11 of whom were National Liberals – those Liberals who had consistently supported the National Government and wartime coalition against the official Party line – and were effectively still taking the Conservative Whip. Although few in numbers, it was clear to the Conservatives that the Liberals could hold the balance of power after the next election. The Woolton-Teviot Agreement merged the National Liberals with the Conservatives at constituency level in 1947 and Central Office went as far as developing an alternative range of constituency literature, omitting the Party title to avoid alienating fused Liberal/Conservative associations. Churchill also secured Lord Teviot’s endorsement of the policy document Right Road for Britain in June 1949.

But there was also interest in reaching agreement on an electoral pact with the independent Liberals, in order not to split the anti-Labour vote in marginal constituencies. The Party Chairman Lord Woolton, with the support of the National Union Executive, encouraged the local association not to contest Montgomery in favour of Clement Davies, as ‘Liberals would find it much easier to vote for our candidates if we did not oppose the Liberal leader’. The letter to Lord Woolton from a supporter urging such a pact, and its reply, is typical of the many letters received by Central Office in the immediate aftermath of the Labour victory. 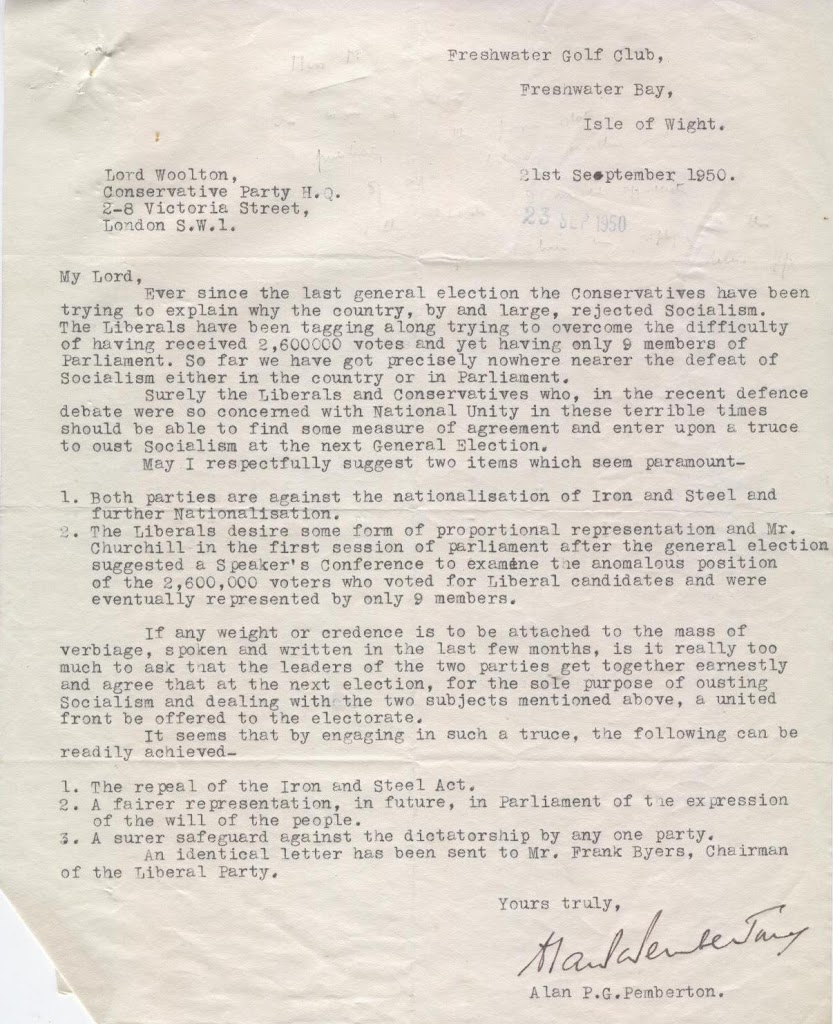 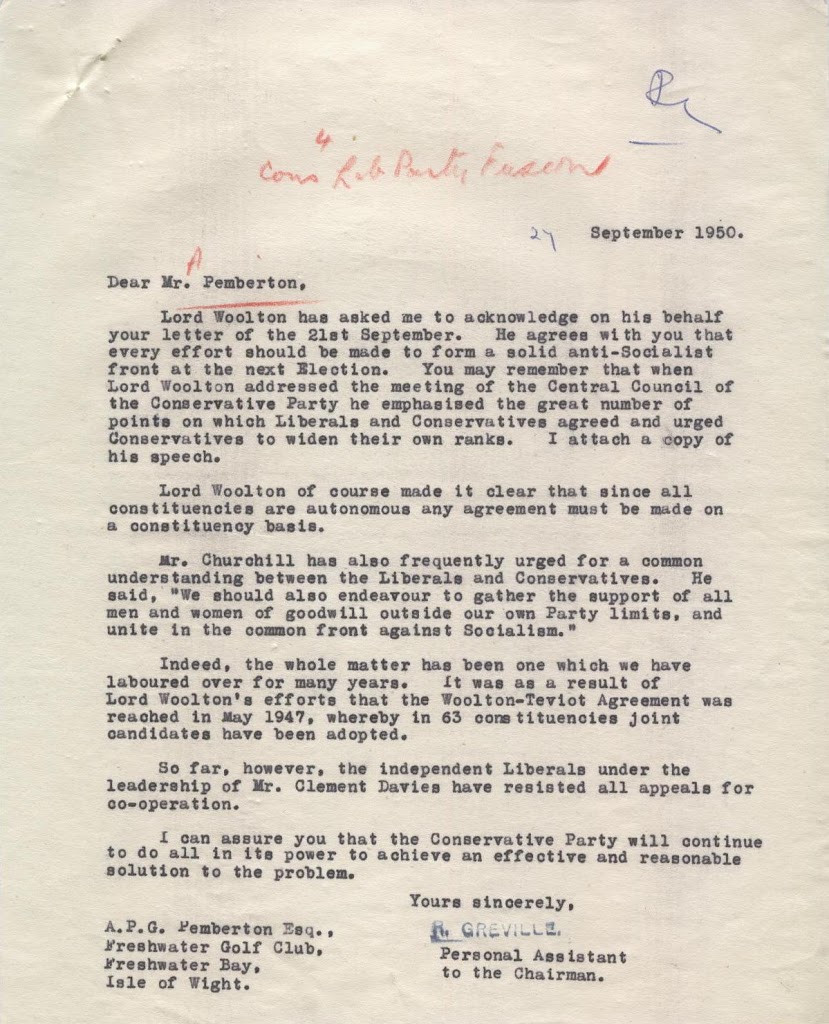 Even the Daily Telegraph was urging a deal:

The National Union’s Executive Committee instructed its Area Chairmen to prepare detailed reports on the potential of collaboration with the Liberals, and these were discussed with Churchill during the Party Conference in Blackpool in October 1950. Although they were generally in favour of the work being done at constituency level to bring the Conservatives and Liberals closer, apart from Wales and the Eastern Area it was felt that there would be no advantage to any formal collaboration. In the latter Area, “Negotiations could proceed, but strictly private support at a higher level within our Party might be of great value in facilitating satisfactory conclusions. A national approach and any form of publicity are strongly deprecated.” The view of the West Midlands Area was that, “Were it possible to fuse completely the Conservative and Liberal Parties under a new name, it would obviously be most desirable. But at this moment is not practical politics…. To resuscitate the Liberal Party and put it in a position to hold the balance of power in the House of Commons would surely be the most irresponsible folly and disastrous to every long-term interest of the Conservative Party.” [CCO 4/5/82].

The Conservative leadership did not feel that the number of Liberal MPs justified the number of constituencies in which they were expected to stand down, and negotiations barely got off the ground. While grass-roots members from both parties urged their leaders to see the bigger picture, it was impossible for senior figures on either side to get beyond mutual distrust, as illustrated by the strongly-worded memorandum from Sir Stephen Pierssene, General Director at CCO dated 16th January, 1950: “I have no faith in the power or intention of the Liberals to keep any such bargain. Their sole motive is self-preservation…” 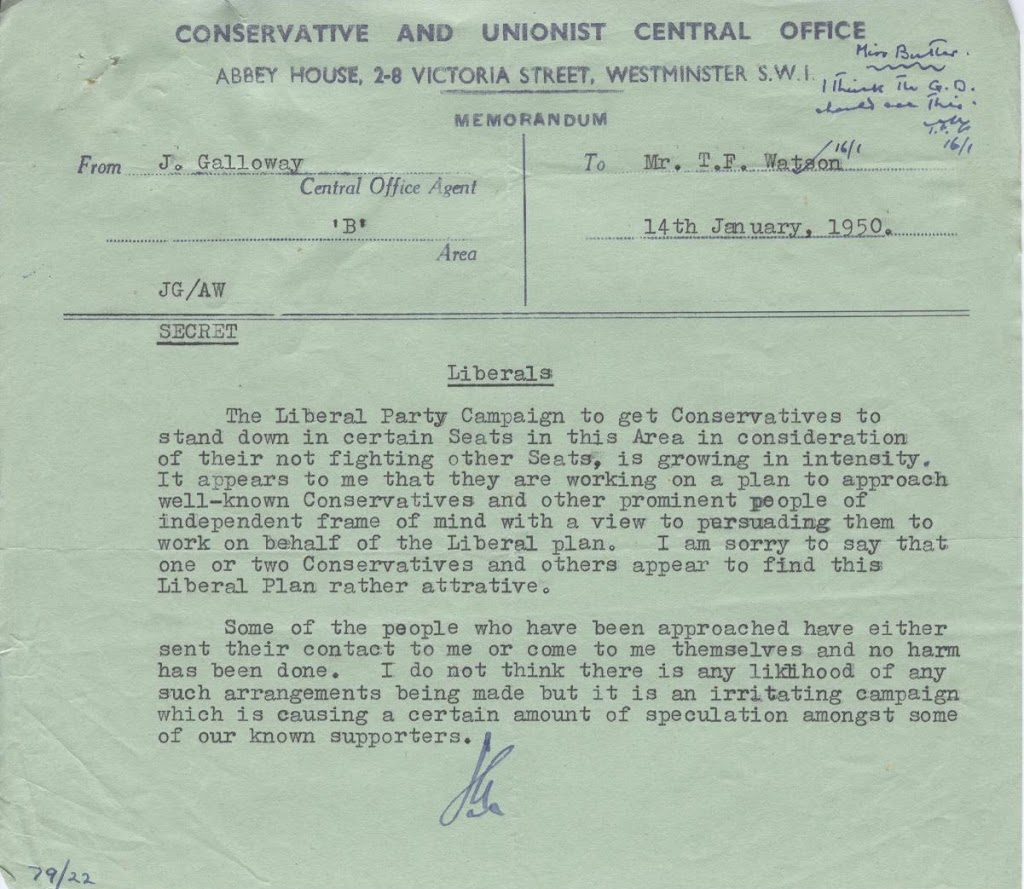 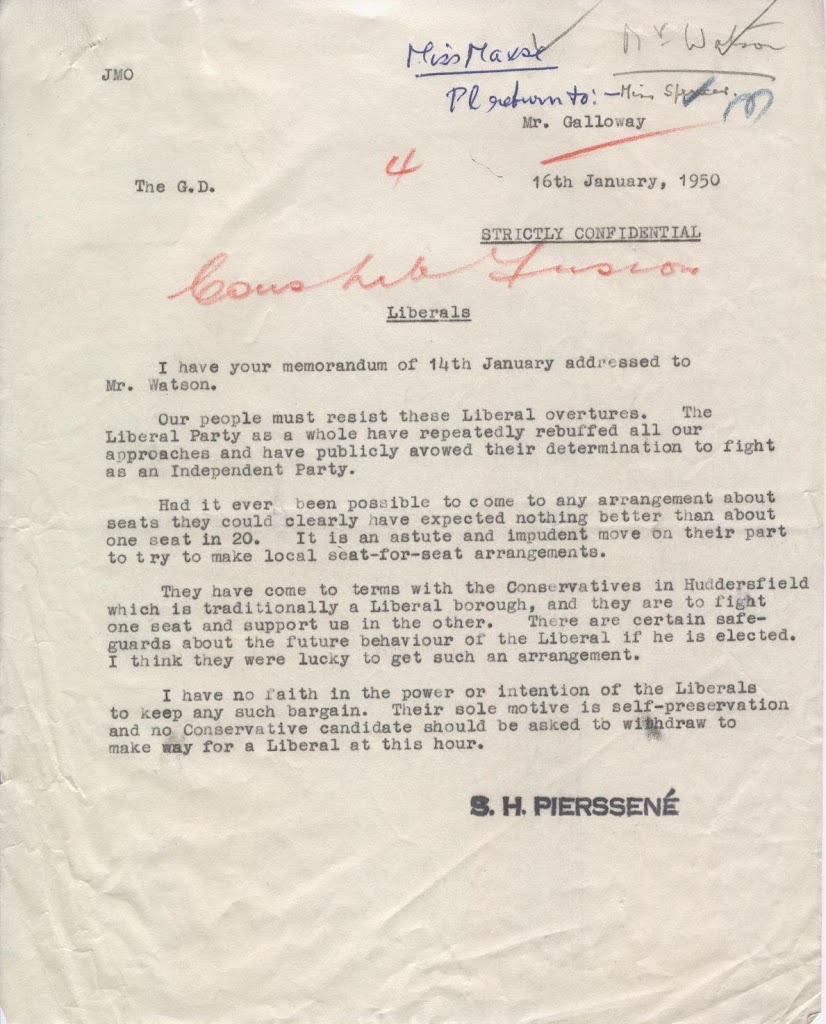 The Liberal leadership was proving equally hostile to a national deal. As The Observer reported on 29th January 1950, Sir Andrew McFadyean was particularly vitriolic in his attack on the Conservatives in his speech to the special Liberal Assembly, adding that, “It would be difficult to find a Liberal leader who would talk to them [the Conservatives] or who could carry the party with him if he came to terms.”

Bitterness caused by the Conservative relationship with the National Liberals – or “Conservative Decoy Party” as Lord Samuel, Liberal leader in the House of Lords disparagingly referred to them – spilled over just a month before the 1950 election with an exchange of letters in press between the Liberal leader Clement Davies and Churchill. Davies requested that the Conservatives desist from using the term “Liberal” in relation to joint Conservative-National Liberal candidates and also took legal advice in attempt to stop them: 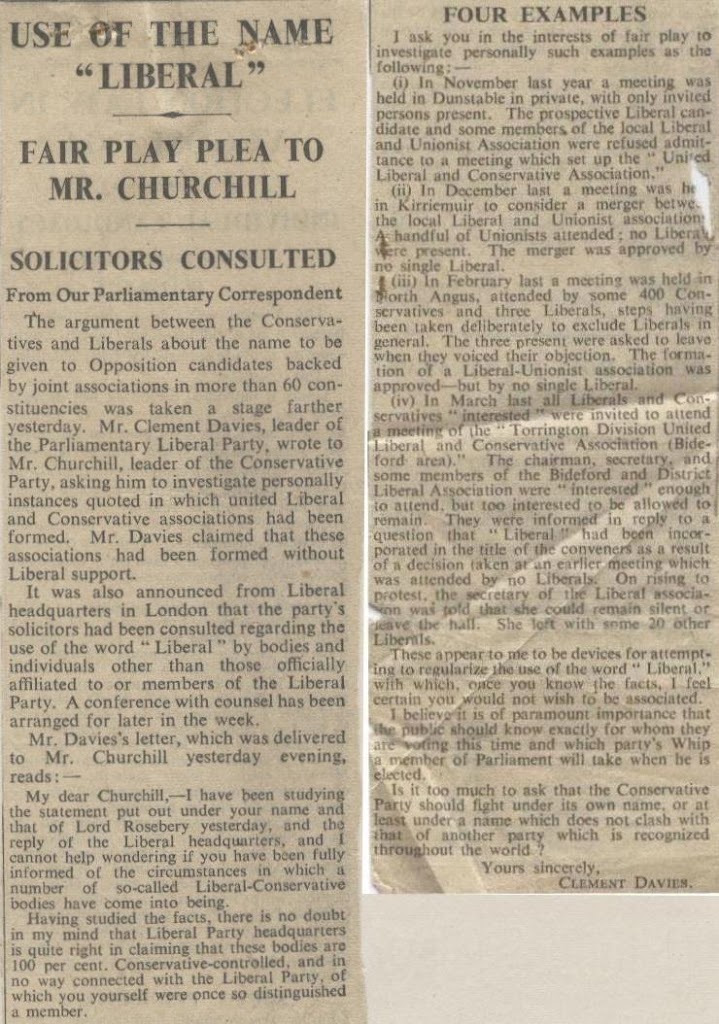 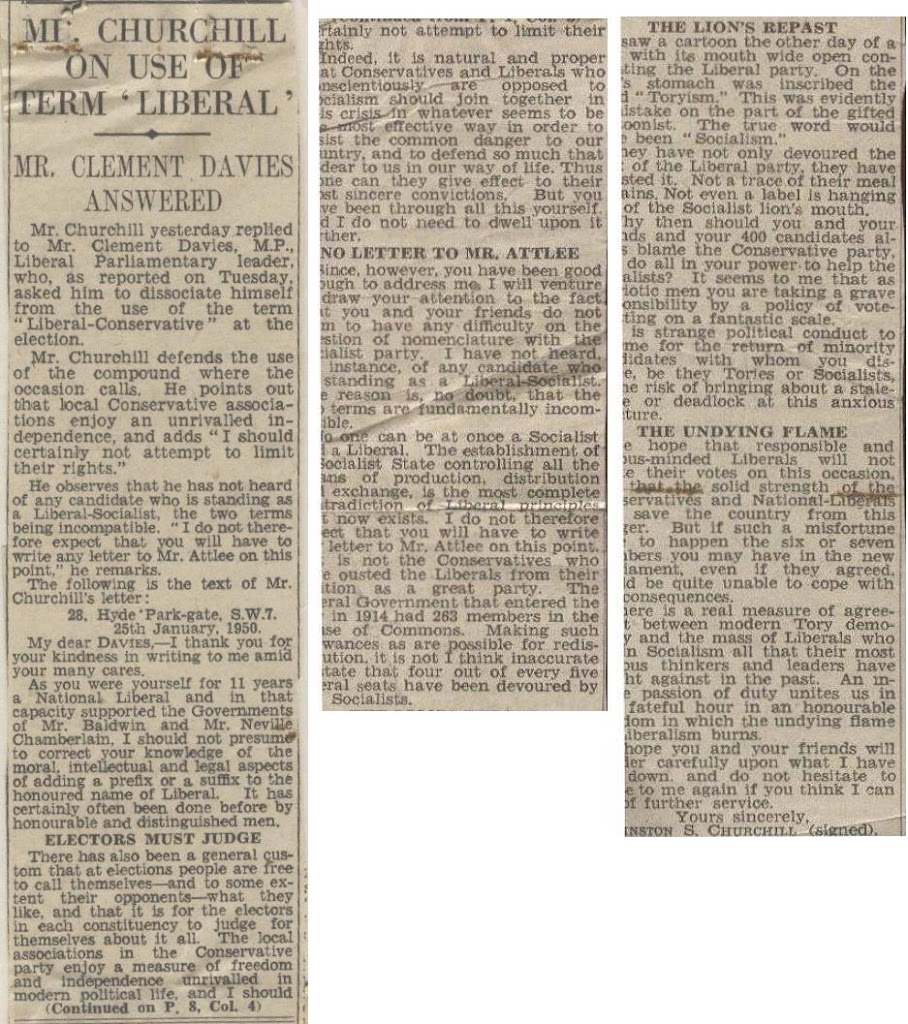 The chance of reaching a national agreement with the Liberals virtually disappeared after the 1950 election failed to break Labour’s majority by 5 seats. The reduction in Liberal seats from 12 to 9 resulted in their increased intransigence at fear of being swallowed up completely. The 1951 election resulted in a hung Parliament and saw the Conservatives regain power, but only with the help of the National Liberals, and Churchill continued to court the Liberals. He offered Clement Davies a Cabinet post, but this was turned down on the grounds that it would have destroyed the Party. On 3rd February 1953 he even agreed to meet a delegation to discuss electoral reform: 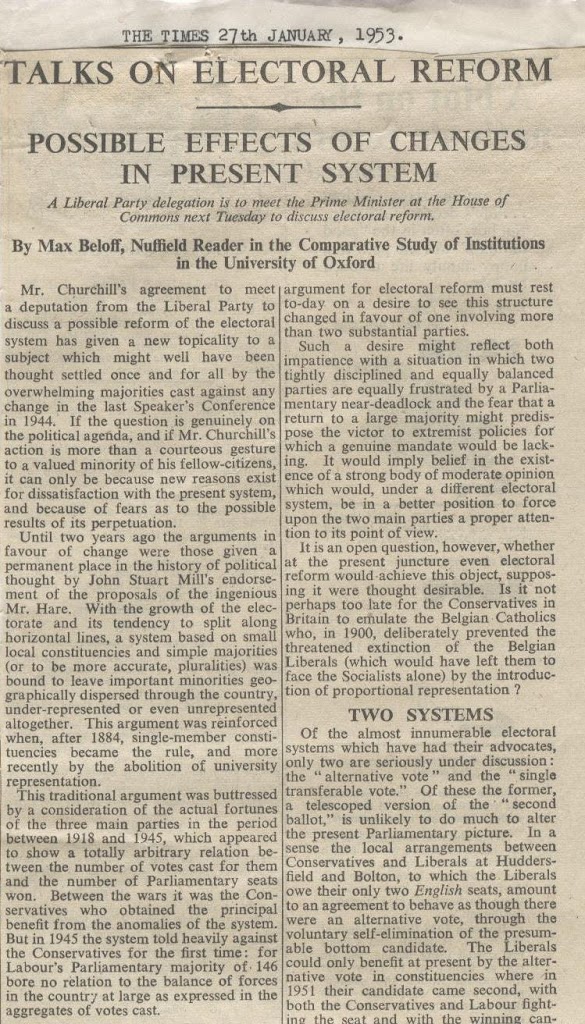 A year later the Conservative Chief Whip, Patrick Buchan-Hepburn informed Churchill of an approach from the Liberal leader Lord Grantchester offering an “understanding” over certain constituencies in return for a Commission of Inquiry into proportional representation. Dismissing the proposal he said, “I was not impressed by this conversation, much of which you will see was rather naïve. I felt that it sprang from a real fear that the Liberals may disappear altogether, and that this plan was designed primarily to keep them in being…” [Memorandum from Buchan-Hepburn to Churchill dated 25th January 1954; CCO 4/5/82].

Meanwhile, local electoral pacts were commonplace as both sides gave tacit approval to tactical voting while refusing to condone any national agreement. By December 1949 there were 47 “fused” constituency associations fielding joint Liberal/Conservative candidates [CCO 4/3/43] and 61 on the eve of the 1950 election [Ramsden – The Age of Churchill and Eden, 1940-1957, p. 200]. But enthusiasm for such arrangements varied greatly; often there was reluctance on both sides to work together, and selecting a candidate acceptable to both was problematic. Support from Central Office was lukewarm at best – as illustrated by Pierssene’s obvious delight at the Liberal repudiation of a joint candidate in Reigate: “I think this should rather be a gift for us….This attitude is consistent with the determined bid for suicide which the Liberals made as a Party in February. I think a few more instances like this would hasten the end.” 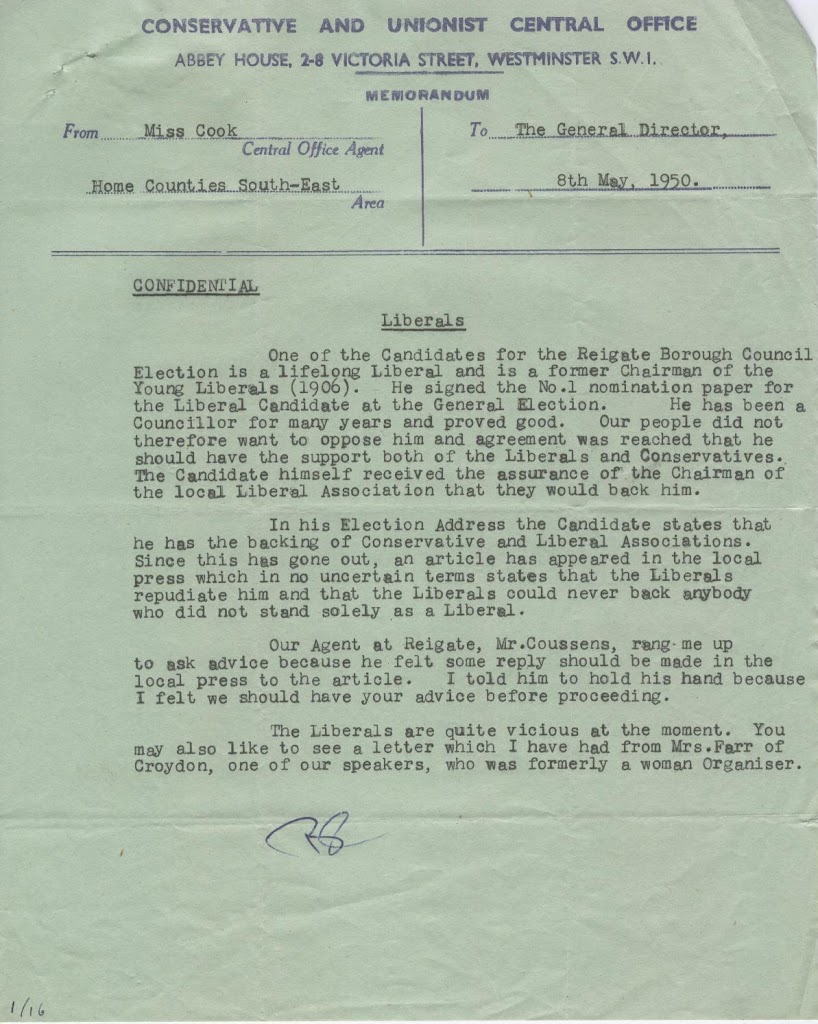 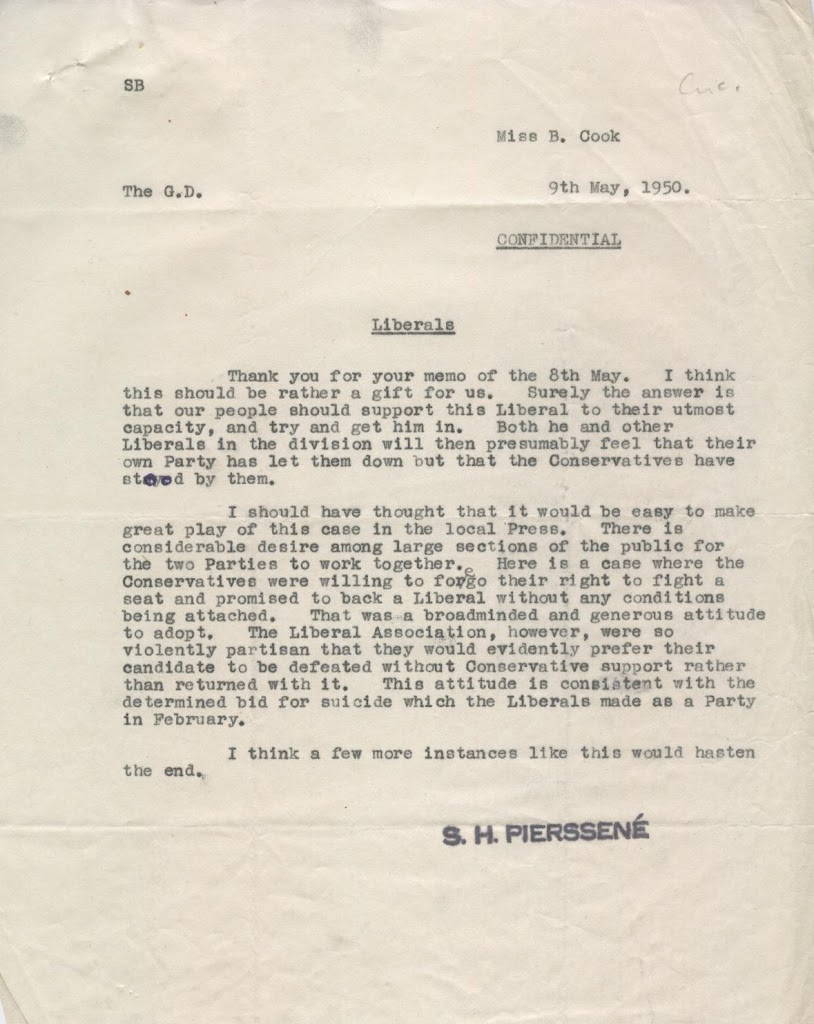 Some progress was made, for example in Wales where discussions took place on an electoral pact covering the Gwynedd constituencies. Approval was given by the Party Chairman, Oliver Poole who, “did not think that any obstacle should be put in the way of the four constituencies if they were really anxious to bring about such an arrangement. It could only be done however, on a local and not a national level’. [CCO4/7/85 – Minutes, 28/03/1957]. However in South Pembrokeshire as so often happened, such collaboration as had existed broke down amidst recriminations, as reported in the South Wales Echo of 15th February 1957:

After 1951, the Liberals held the balance of power. But in 1955, the Conservatives’ majority of 60 immediately removed the need for collaboration. The urgency for creating an anti-Socialist front had in any case petered out somewhat as Labour’s radicalism ran out of steam. The Liberals’ even more catastrophic performance in 1955 when they were reduced to just 6 seats also meant that there was little to be achieved from an agreement with them. Local pacts still persisted in some areas, but there was some concern that collaborating with the Liberals might prevent their seemingly endless downward trajectory and inevitable assimilation into the Conservatives. Pierssene was adamant that any electoral pact, “must remain at a local level” adding that, “Ultimately, the fate of the Liberal Party must be decided by public opinion…voting for Liberal candidates at the next General Election may well…put a Socialist Government in power. If this happens it may well seal the doom of the Liberal Party.” [Letter from Pierssene dated 5th December 1957; CCO 4/7/86]. Following an apparent upsurge in Liberal support, on 20th February 1958, Poole responded to further calls for a deal saying, “…it is impossible to do business with them unless they begin to show some sense of responsibility or willingness to pursue a consistent policy: moreover, it would be a little short of yielding to blackmail to enter into negotiations with them now…It would be unrealistic to believe that the Liberals would be prepared to agree to terms which it would be honourable for us to accept…” [CCO 4/7/86].

The following year Edward Martell (who had left the Liberals in 1956) wrote to Lord Hailsham on 21st July 1959, “We here all remain convinced that Liberal candidates will be the cause of unseating enough Conservative Members in marginal seats to jeopardise the return of a Conservative Government. We also remain convinced that no avoidable risk of such a thing happening should be taken.” [Letter from Martell: CCO 4/8/118]. Martell’s offer to act as go-between to arrange an electoral pact at national level was turned down. The election, when it came in October that year, resulted in a 3rd successive Conservative victory and an increase in the overall majority to 100 seats.