18th June 2010 sees the 75th anniversary of the Anglo-German Naval Agreement of 1935, perhaps not a date to celebrate as it proved to be one of the milestones on the road to appeasement of Nazi Germany leading up to the outbreak of the Second World War. The Conservative-dominated National Government led by Baldwin was keen to demonstrate its support for disarmament after the horrors of the First World War. Although reaching a bilateral naval agreement with Germany was controversial, it viewed it as an important step towards bringing Germany within the constraints of international agreements and limiting her military build-up. Nevertheless, it gave tacit British approval for Hitler to expand Germany’s navy beyond the limits imposed on it by the Treaty of Versailles, and did so unilaterally from its former Wartime allies. The general tone of the Party’s publication Hints for Speakers published for the Party’s army of speakers and doorstep canvassers prior to the 1935 General Election was one of emphasising the Government’s commitment to collective disarmament. The statistics it included make for sober reading, with the knowledge of the conflict soon to come: Compared with 1914 we have reduced our Capital Ships from 69 to 15; we have reduced our Cruisers from 108 to 50; we have reduced our Destroyers and Torpedo Boats from 322 to 118, and we have reduced our Submarines from 74 to 48. When the Agreement with Germany was announced, it was couched in disarmament terms rather than acknowledging that a concession to the German military build-up had been made: Recently the British Government concluded an agreement with the German Government under which German Naval tonnage is to be limited to 35 per cent of British tonnage….If this agreement had not been entered into Germany might have proceeded to build up to 100 per cent of our Naval strength…. A notable exception to the 35% ratio rule was made however in the matter of submarines. Contrary to Articles 181 and 191 of the Treaty of Versailles which forbid the construction or acquisition of submarines by Germany, the foreign secretary, Sir Samuel Hoare announced that, Germany’s submarine tonnage shall not exceed 45 per cent of the total of that possessed by the members of the British Commonwealth of Nations. The German Government reserve the right, in the event of a situation arising which in their opinion make it necessary for Germany to avail herself of her right to a percentage of submarine tonnage exceeding the 45 per cent abovementioned, to give notice to this effect to His Majesty’s Government…In the course of debates on the Agreement in the House of Commons in May 1935 it emerged that Germany already had 12 new submarines under construction, due for completion within 6 months. 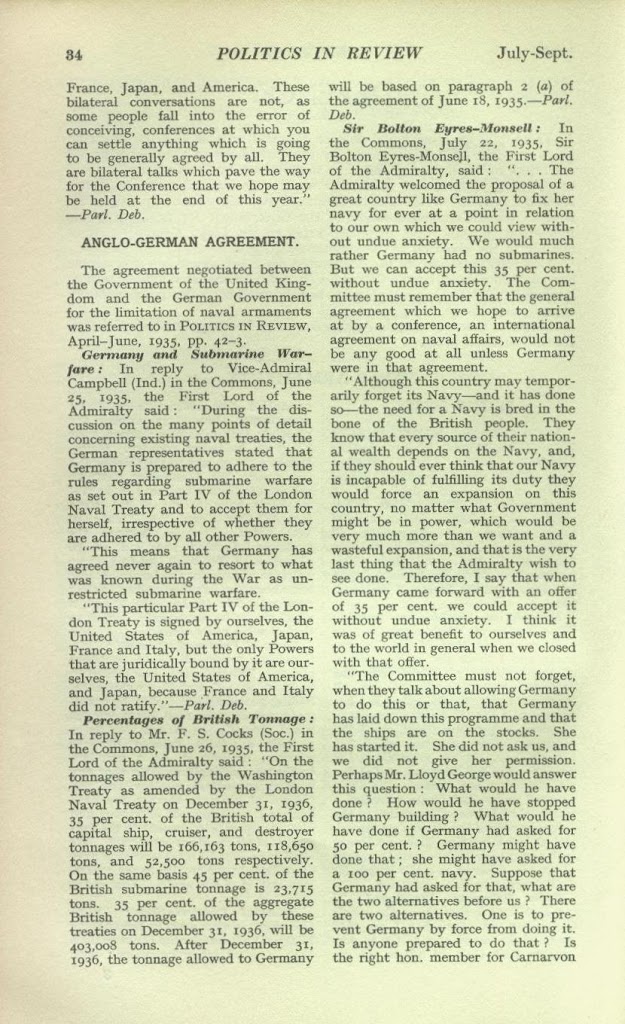 However, to lay all the blame for the appeasement fiasco at the Conservatives’ door would be wrong, as this was clearly the prevailing concern of the times. When, in response to Hitler’s claim to have achieved parity with Great Britain in the air in April 1935, the Prime Minister announced the expansion of the RAF, Attlee’s response was that, Our [the Labour Party’s] policy is not one of seeking security through rearmament but through disarmament. Our aim is the reduction of armaments and then the complete abolition of all national armaments, and the creation of an international police force under the League.