Although he didn’t take the role of General Secretary until 11 March 1985, Gorbachev was already a high-ranking member of the Communist Party of the Soviet Union by the late 1970s.

Gorbachev’s role in the Party allowed him to travel regularly, and he had already visited Canada and a number of Western European nations, but his trip to the United Kingdom marked the first visit by such a high-ranking Soviet official in almost three decades.

The visit to the UK lasted eight days, but its highlight was a five-hour meeting with Margaret Thatcher in her country residence, Chequers. The meeting was hailed as an important stepping stone in the thawing relationship between the Soviets and the UK – and the west as a whole. 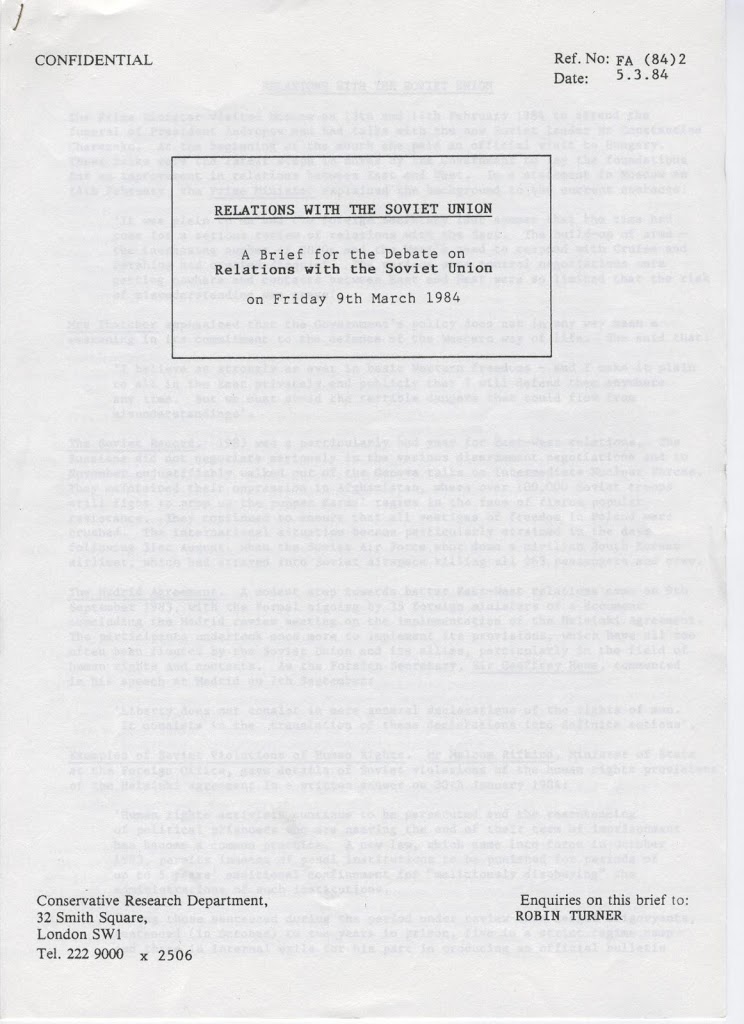 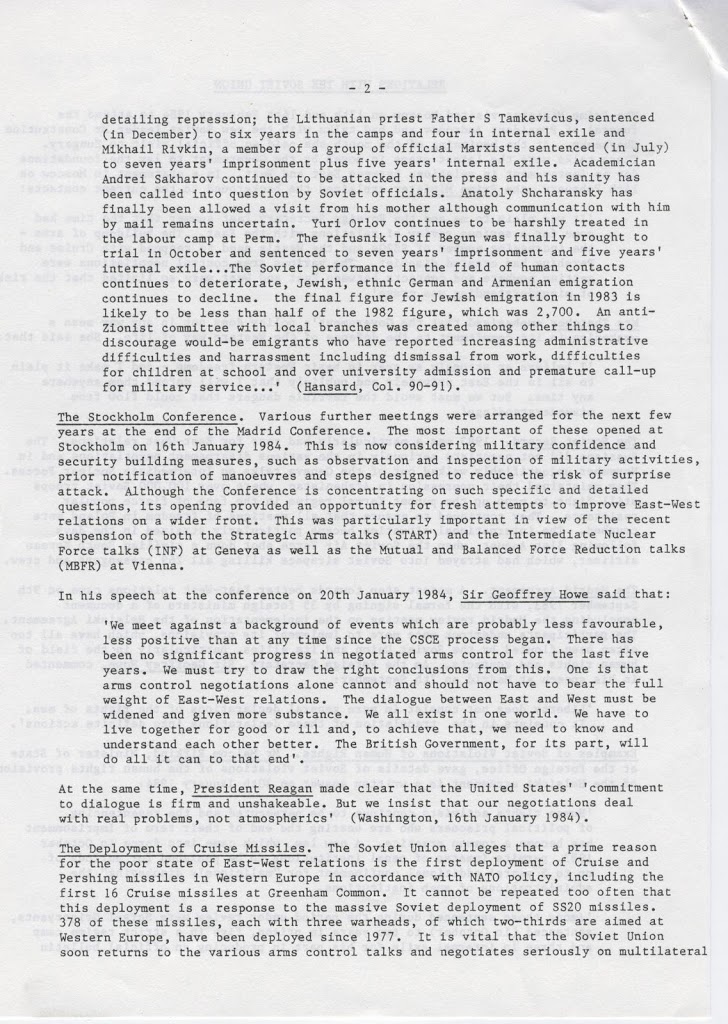 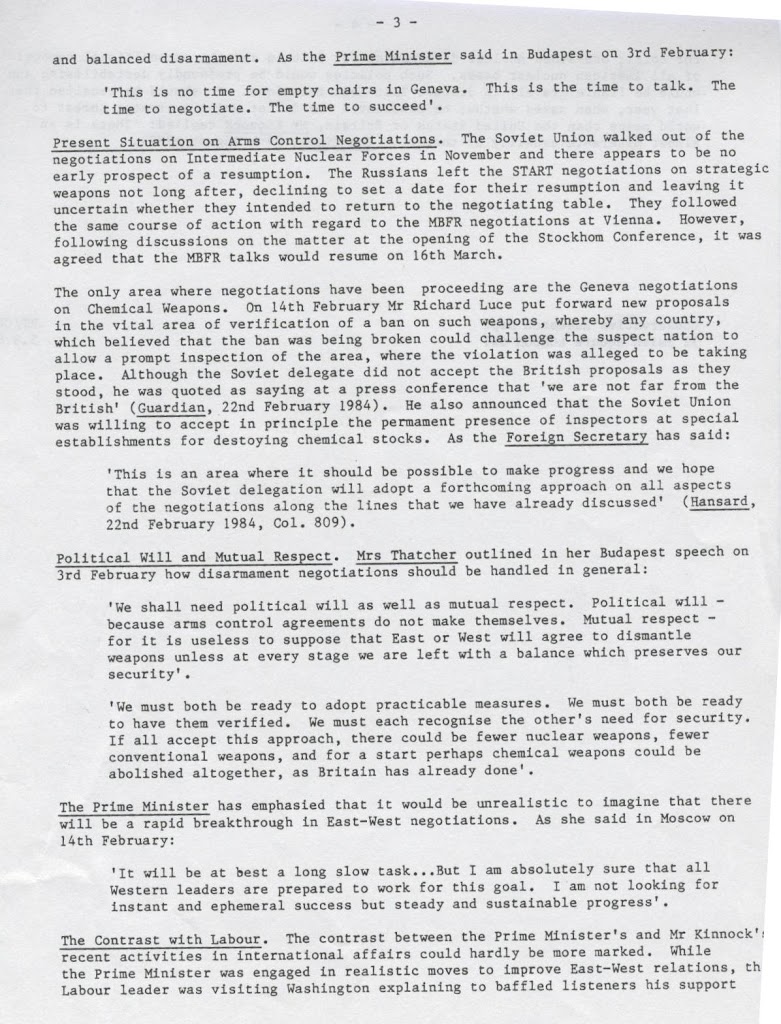 Confidential Party briefing paper dated March 1984 outlining the UK’s stance on relations with the USSR, suggesting that although the UK was open to dialogue, its patience was limited [CRD 95]

The discussion focused on subjects like arms control and communication channels, and although the leaders are said to have disagreed on certain issues, the visit marked a softening between the two national figures. Thatcher seemed to warm to Gorbachev’s concepts of perestroika (restructuring) and glasnost (openness). The Prime Minister, famous for her ‘iron’ stance towards the Soviets, commented in an interview with the BBC, ‘I like Mr. Gorbachev. We can do business together.’ She continued:

‘We both believe in our own political systems. He firmly believes in his; I firmly believe in mine. We are never going to change one another. So that is not in doubt, but we have two great interests in common: that we should both do everything we can to see that war never starts again, and therefore we go into the disarmament talks determined to make them succeed. And secondly, I think we both believe that they are the more likely to succeed if we can build up confidence in one another and trust in one another about each other’s approach, and therefore, we believe in cooperating on trade matters, on cultural matters, on quite a lot of contacts between politicians from the two sides of the divide.’

While Gorbachev was in office, he and Thatcher, often in conjunction with Reagan, worked cautiously but consistently towards a thaw in East-West relations. Gorbachev remained in power until 1991, and his efforts at opening the USSR to reform and the outside world earned him a Nobel Peace Prize in 1990. 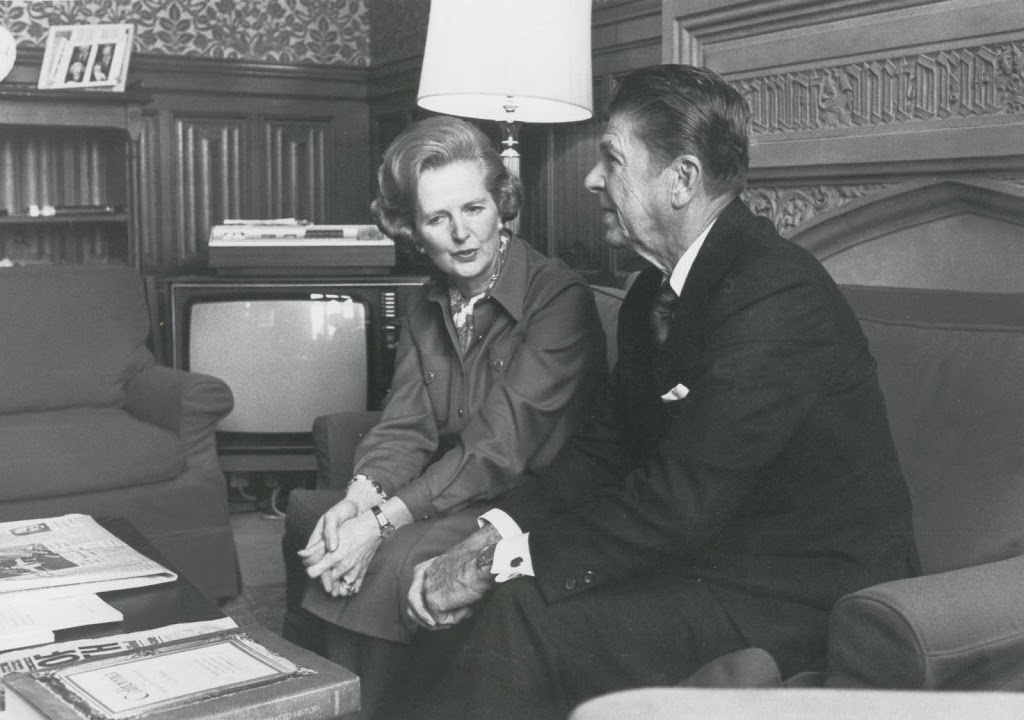 Thatcher and Reagan in discussion