This post is part of a three-part series that will provide brief insights into the changes in the party after the enfranchisement of women. This post, which takes an introductory look at the women’s organisations through the Handbook for Women Organisers and Workers, will be followed by an exploration of the ways in which women changed and used the Party’s organisational structure. A final post will provide some guidance on Archive material for further research.

While sorting files returned by one of our readers, we came across a 1928 Handbook for Women Organisers and Workers, published by the Women’s Unionist Organisation under the authority of the Conservative and Unionist Central Office. The Party produced quite a few of these sorts of guides, and they provide fascinating insights into the ways by which various facets of the Party worked. 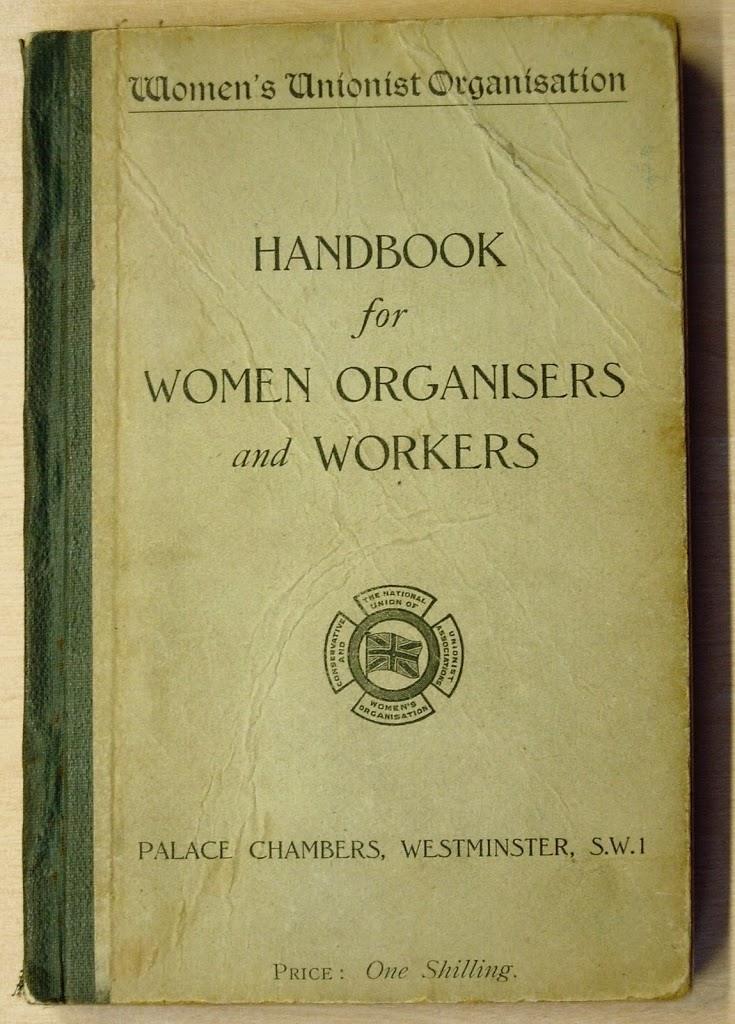 By 1928, all women over the age of 21 could vote, and the Party was keen to attract what it saw as an enthusiastic but untapped segment of the electorate – as well as to show it was including women in its politics (see our post in two week’s time for more on the history of women in the Party). It was still the 1920s, however, and women often joined separate groups: 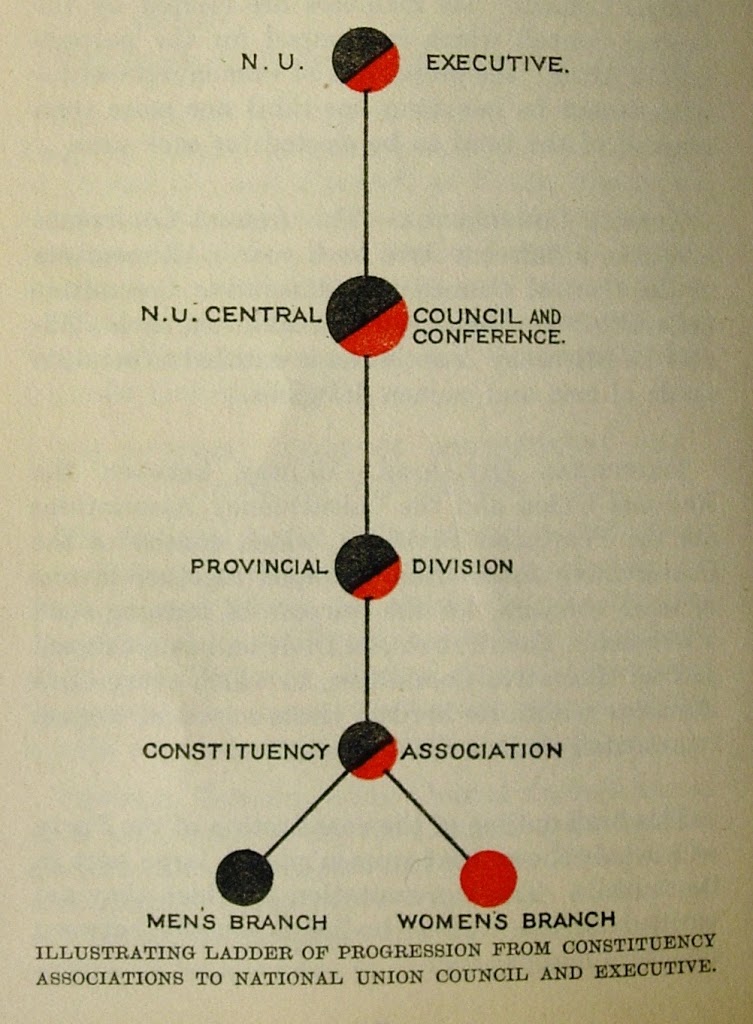 The Women’s Unionist Organisation formed in 1918/1919 (it became the Women’s National Advisory Committee in 1928); the Handbook states on its first page:

It is essential that the Conservative and Unionist Party should adopt every possible means to interest the women of the country in public affairs, and to ensure their close co-operation with men in political work. (PUB 190/5)

The Handbook also points out that women were often able to meet at different hours, preferred different issues (especially education), and were extraordinarily successful fundraisers.

The earlier 1925 edition of the Handbook (PUB 203) is slightly more anxious that women be educated in the political sphere. Suffrage was still an issue, and the book states that although ‘Increasing numbers of women are anxious to improve their political education … many women electors do not yet realise the importance of the vote and the responsibility it imposes.’ It goes on: ‘Experience has proved that amalgamated associations of men and women do not enable either section of the electorate to develop its full efficiency in constituency work.’

The Conservative (or Conservative and Unionist Party) was fairly well organised, and it supplied a great deal of literature for both men and women on running constituency organisations, elections and other events. The Handbook covers everything from keeping track of finances and canvassing to sample agendas and branch rules. It also includes advice on a number of miscellaneous projects, including Empire Day (women’s organisations were expected to organise something in celebration) and, most importantly for any good British organisation, tea. On page 83, the Handbook reads:

Tea is an established feature at almost all ordinary branch meetings, and most branches have a regular Tea Committee … Tea should not be given free … It should not be served during the address; and care should be taken not to interrupt the speaker or entertainer by the clashing of tea cups. 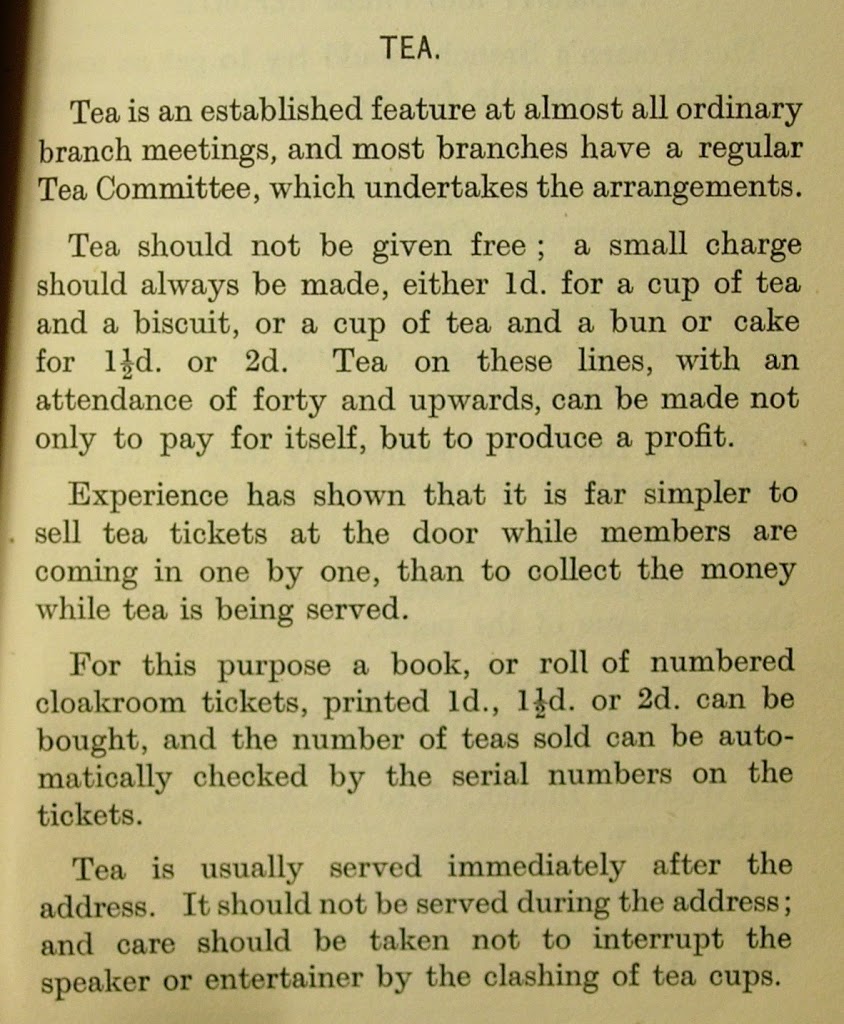 The importance of tea is not something to be laughed at, however, as many attribute the enormous success of the WUO to the social opportunities it provided. From tea to outings to educational opportunities, social occasions were an enjoyable way to meet candidates and proved successful fundraising and Party-building opportunities.