With the result of yesterday’s AV referendum eagerly awaited, the Conservative Party Archive takes the opportunity to look back to 1918 when the switch to AV seemed inevitable, even passing the House of Commons by a small majority, only to be blocked by the House of Lords.

Although the Representation of the People Bill of that year contained clauses which finally gave the vote to women for the first time, what proved most controversial in its passage through Parliament and nearly caused a constitutional crisis was its proposal to replace ‘first-past-the-post’ with elections by the Alternative Vote and Proportional Representation (Single Transferable Vote) methods.

Surprisingly this radical change to the voting system had already been recommended by both the Royal Commission on Electoral Systems in 1910 and the (cross-Party) Speaker’s Conference early in 1917. The Bill subsequently presented before Parliament included AV as the method for election in single-member constituencies and PR in seats returning more than two members. Reminiscent of today, the then Conservative-Liberal coalition decided to allow a free vote in the Commons on the Speaker’s Conference recommendations (although in the special circumstances of the First World War, 160 MPs were absent on active military service). But in marked contrast to 2011 and perhaps reflecting more the apathy of today, the Prime Minister Lloyd George declared no interest in the result:

I express no personal opinion upon it. I have not got any. I never made up my mind, and I really have no time to make up my mind upon it. Unless I am really forced to do so, I do not propose even to study it during the War.

Difficulties arose, and a constitutional crisis only narrowly averted, as Conservatives in the House of Commons repeatedly amended the Bill to replace its PR components with AV, only for the Lords to re-instate PR. An angry resolution was passed at a Special Conference of the National Unionist Association of Conservative & Liberal Unionist Organizations convened on 30th November, 1917, and cabled to Lloyd George, then in Paris:

…that before the Representation of the People Bill comes into operation, it is essential that the Government should give effect to the preamble of the Parliament Act by establishing a reformed second chamber possessed of adequate powers immediately….

The amendments and counter-amendments between the two Houses continued right up until the last day of the Parliamentary Session on 6th February 1918, amidst fears that the Bill might be lost completely:

The Chamber was crowded from end to end. There have not been so many members in attendance on the last day of a Session for many years. Some had even come from the front in response to urgent “whips”, including Sir John Simon, who, to gain time, had made the journey across the Channel in an aeroplane.

In order to save the Bill, the Commons was forced to capitulate and agreed to the complete removal of the AV provisions while agreeing to allow discussion of an experimental scheme whereby 100 MPs might be elected by PR. Amid angry recrimination of the Lords, Bonar Law made the Government’s position clear during the Commons debate:

I do not believe that the country cares twopence one way or the other about either proportional representation or even the alternative vote, but I do say that the country does care about the passing of this Bill. I do say that, whatever might have been the effect at the beginning, if the Bill fails to go through now it will produce a feeling in the country which I am afraid to contemplate…..It cannot go backwards and forwards between the two Houses indefinitely, without the Bill being destroyed. There is only one way, in my opinion, in which the knot can be cut. That is by the Government taking the responsibility of saying, “If we cannot save it in any other way we will use the whole machinery of the Government to bring this conflict to an end.” Sooner or later we must do that. Otherwise the Bill is endangered. Well, we are not going to do it on this Amendment.

Perhaps it was revenge, but the proposed experiment in PR was subsequently quashed in the Commons in May 1918. And so PR (with the exception of its application to the university constituencies) was deleted along with AV from the final wording of the Act which passed into law later that same day, and first-past-the-post has remained firmly in place ever since. 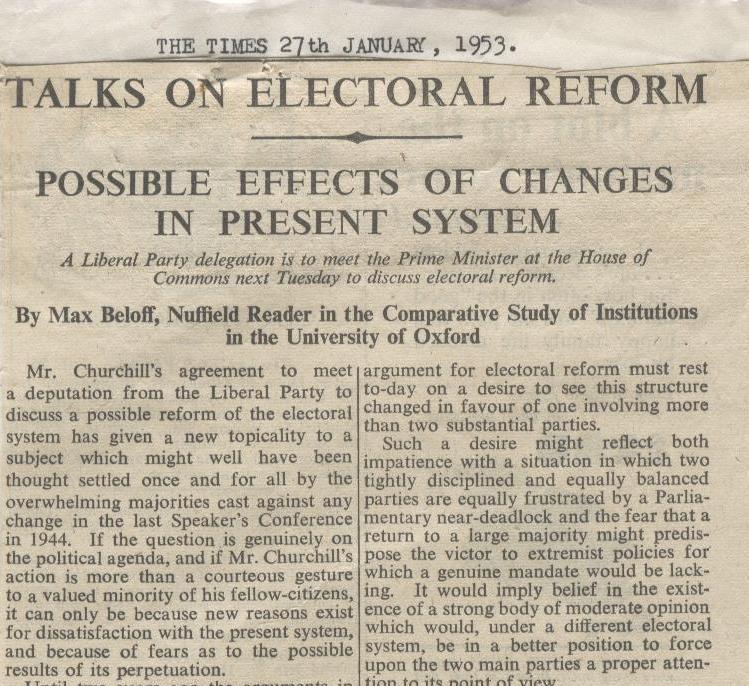 [Churchill held out the carrot of PR in return for Liberal support after his return to power in 1951. But despite some discussion of it in the 1920s it never again received such widespread acceptance as it had done in 1917/18, and was rejected at Speaker’s Conferences in 1944 and 1965-8]