Although the United Kingdom didn’t join the European Economic Community until 1 January 1973, Harold Macmillan’s Conservative government had applied to join the group as early as 10 August 1961.

Ted Heath, then Lord Privy Seal and charged with EEC negotiations, spoke to the assembly at Brussels in August 1961:

“These discussions will affect profoundly the way of life, the political thought and even the character of each one of our peoples… The British Government and the British people have been through a searching debate during the last few years on the subject of their relations with Europe. The result of the debate has been our present application. It was a decision arrived at, not on any narrow or short-term grounds, but as a result of a thorough assessment over a considerable period of the needs of our own country, of Europe, and of the free world as a whole. We recognise it as a great decision, a turning point in our history, and we take it in all seriousness. In saying that we wish to join the EEC, we mean that we desire to become full, whole-hearted and active members of the European Community in its widest sense and to go forward with you in the building of a new Europe.”

(Address given August 1961, requoted in address given 29 January 1963 at the 17th ministerial meeting between the Member States of the European Economic Community (EEC) and the United Kingdom, a draft version of Heath’s 1963 speech forms part of the Edward Heath archive, which was acquired by the Bodleian Library earlier this year and will be available to readers following cataloguing (see story and image of Heath’s notes) 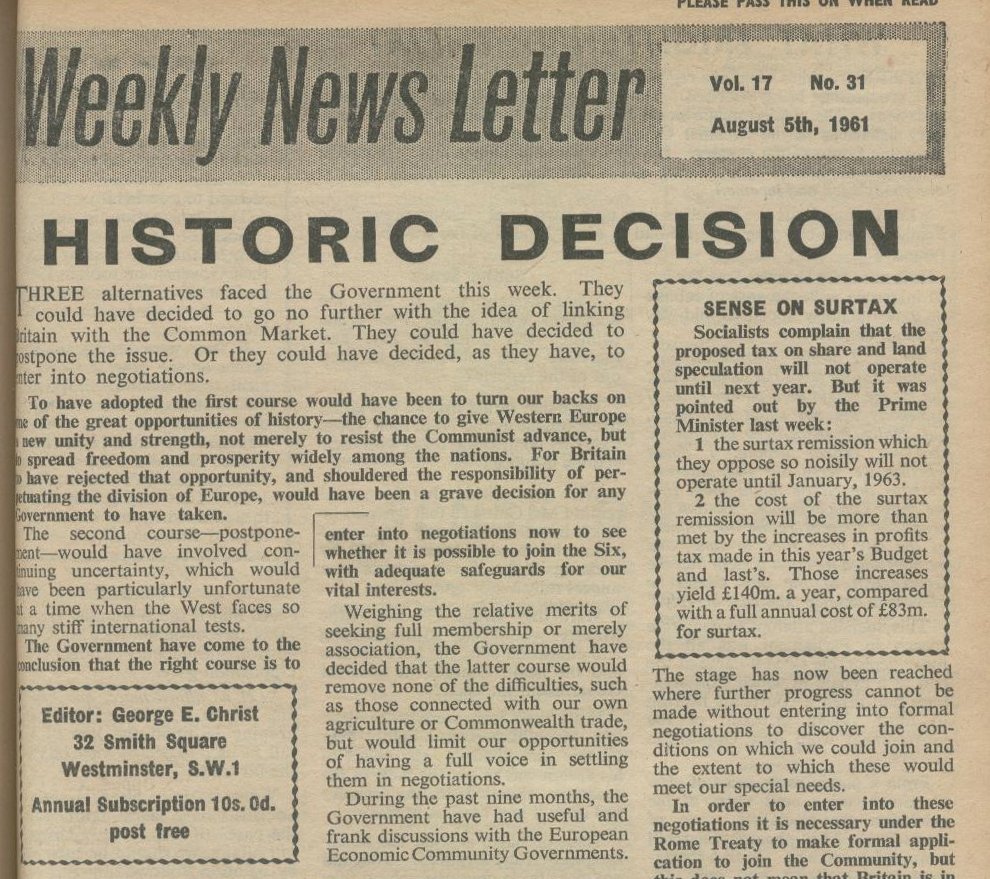 The United Kingdom’s membership in the EEC/EU has sparked much debate and discussion over the years. Its initial application was part of Macmillan’s efforts to develop fresh policies for the Conservative Party; the application “acknowledged that Britain’s standing as an independent great power, and its emphasis on empire, were all but over, which were bitter pills for the right to swallow.” (Seldon and Ball, 1994, p. 51).

However, this first bid was unsuccessful; it was officially and harshly vetoed by French President Charles de Gaulle in 1963 and again following the United Kingdom’s second application in 1967; de Gaulle claimed that Britain displayed a distinct “lack of commitment” and refused very publicly to countenance the union. In a public statement in January 1963, he said:

“She [Britain] did it [asked to join] after having earlier refused to participate in the communities we are now building, as well as after creating a free trade area with six other States, and, finally, after having — I may well say it (the negotiations held at such length on this subject will be recalled) — after having put some pressure on the Six to prevent a real beginning being made in the application of the Common Market. If England asks in turn to enter, but on her own conditions, this poses without doubt to each of the six States, and poses to England, problems of a very great dimension … In short, the nature, the structure, the very situation (conjuncture) that are England’s differ profoundly from those of the continentals.” 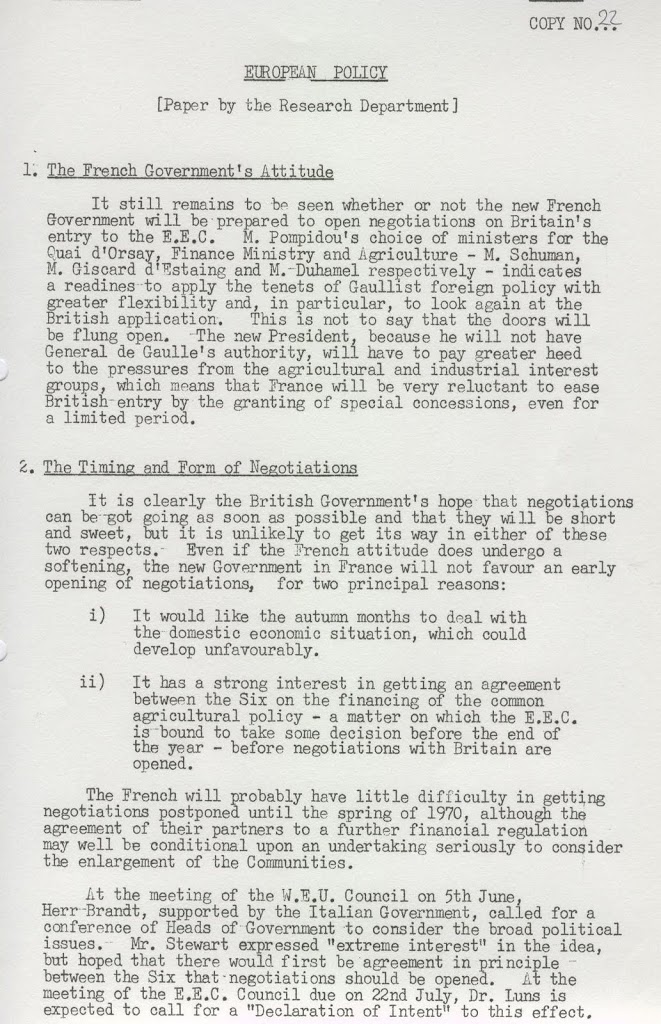 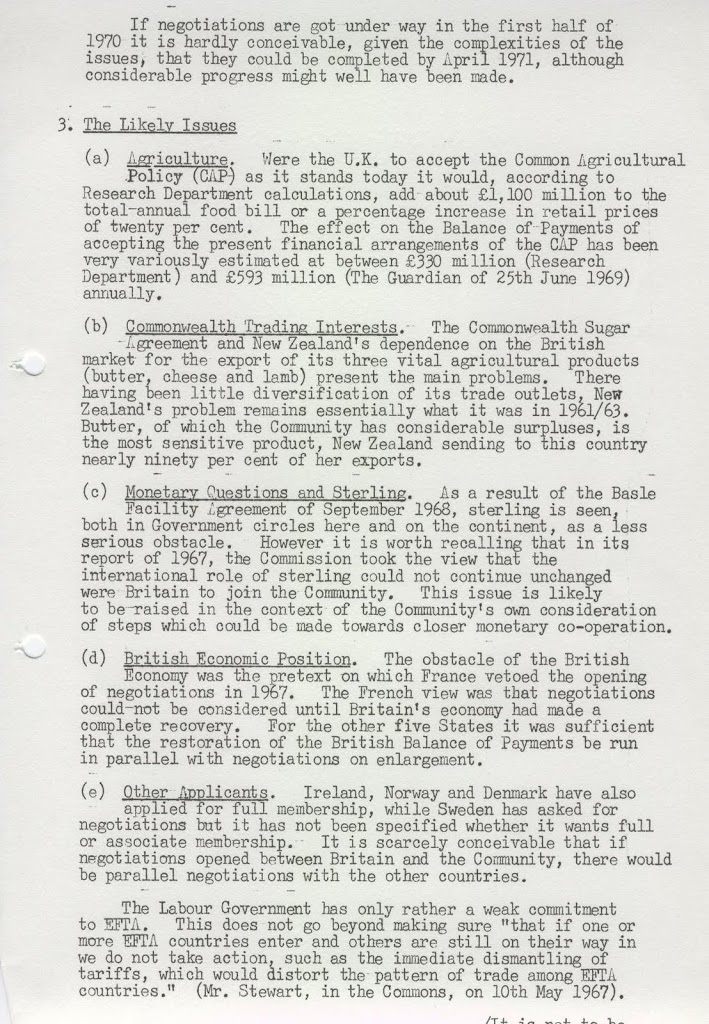 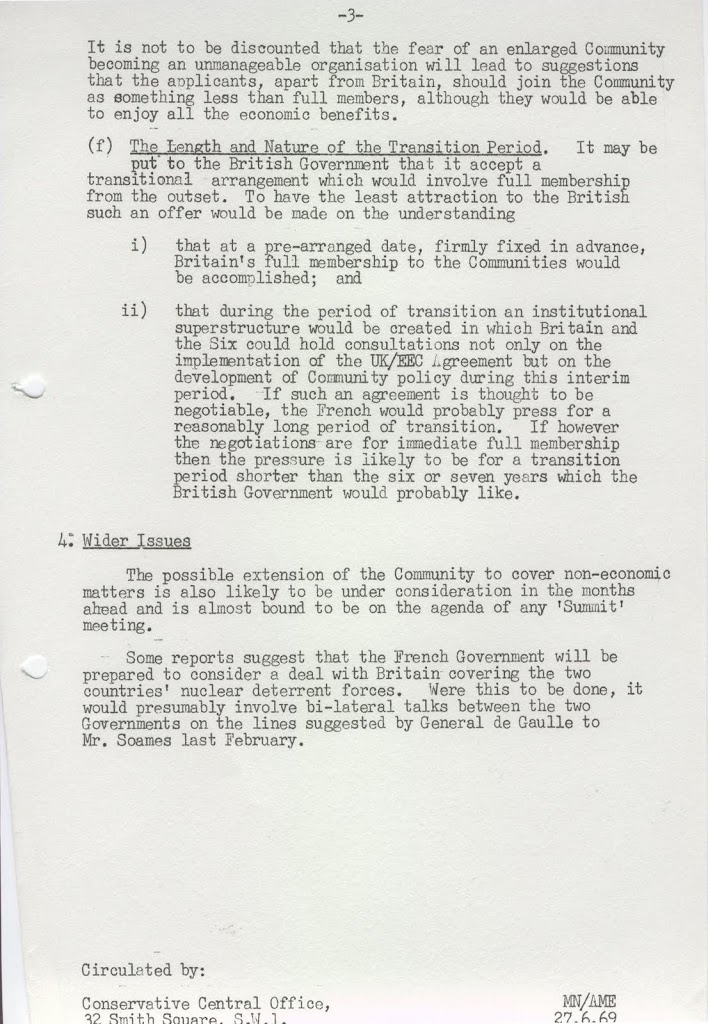 European Policy (a paper by the Conservative Research Department outlining possibilities and policies for another EEC entry attempt; LCC 1/2/17)

It was only after a change of power in France and the further negotiation of the EEC’s agricultural policies that the United Kingdom’s bid was finally successful (along with those of Ireland and Denmark), and the nation was welcome into the EEC on 1 January 1973, under the premiership of Ted Heath.