This week’s press is full of references to the Falklands War, which began 30 years ago on 2 April 1982. The anniversary comes while tensions are once again high over the question of the Falklands’ sovereignty, but the event has been celebrated with solemnity in the UK.

Although many of the Conservative Party Archive’s files on the Falklands remain closed, those that are available help to provide a picture of the UK government’s struggles and decisions during the first days of the conflict.

Politics Today (not pictured) provided background for politicians on current events and legislation, and ‘The Falklands Conflict’ issue (August 1982, PUB 221/40) provides information on the conflict, its resolution and the stance of other UK political parties on it. 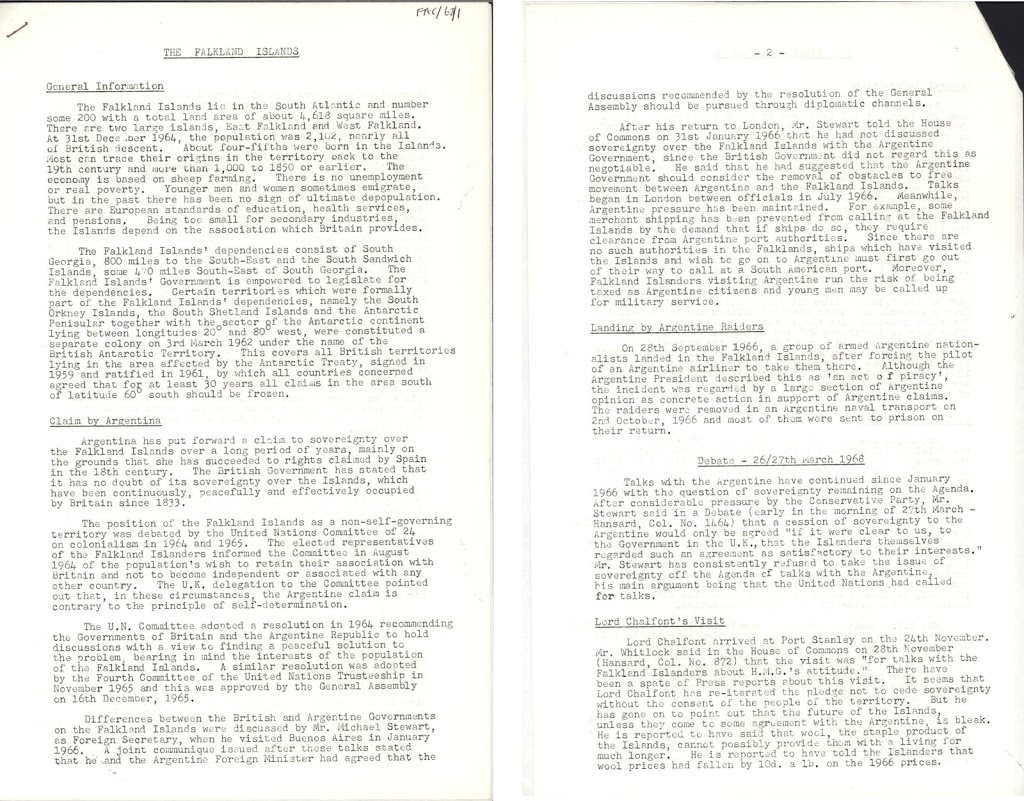 The Conservative Research Department was responsible for providing briefs to MPs and Party members on various issues. This 1967 brief (pictured above) was produced after a group of Argentine nationalists forced an plane to land in the Falklands; the event was described by the Argentine President as ‘an act of piracy’ but raised questions over the place of a debate over sovereignty (CRD/B/14/2). 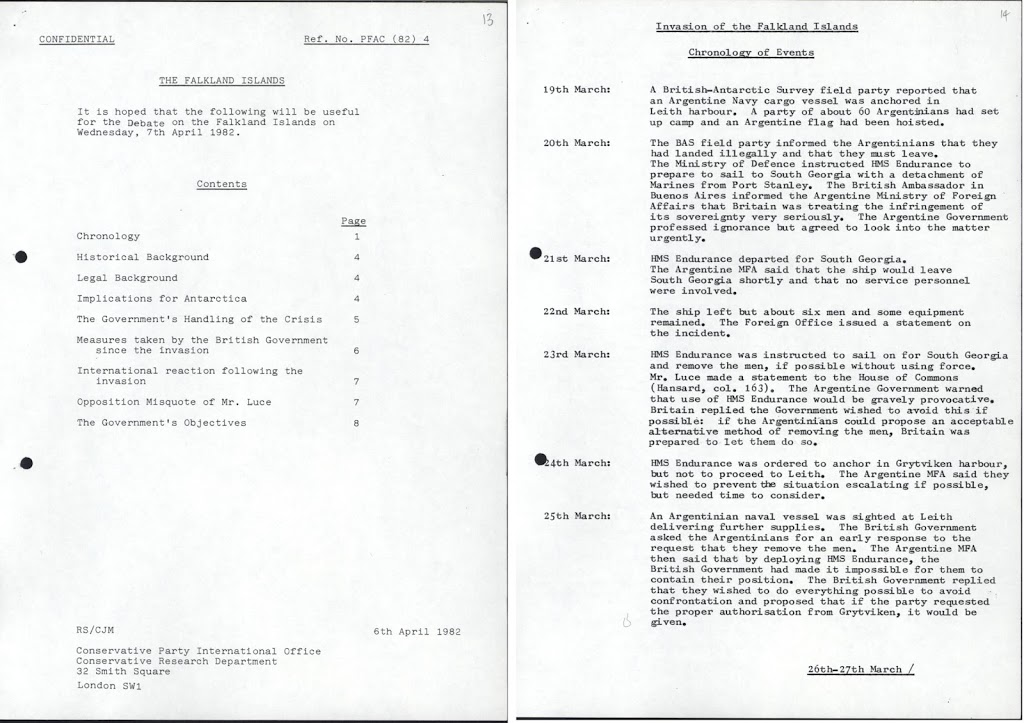 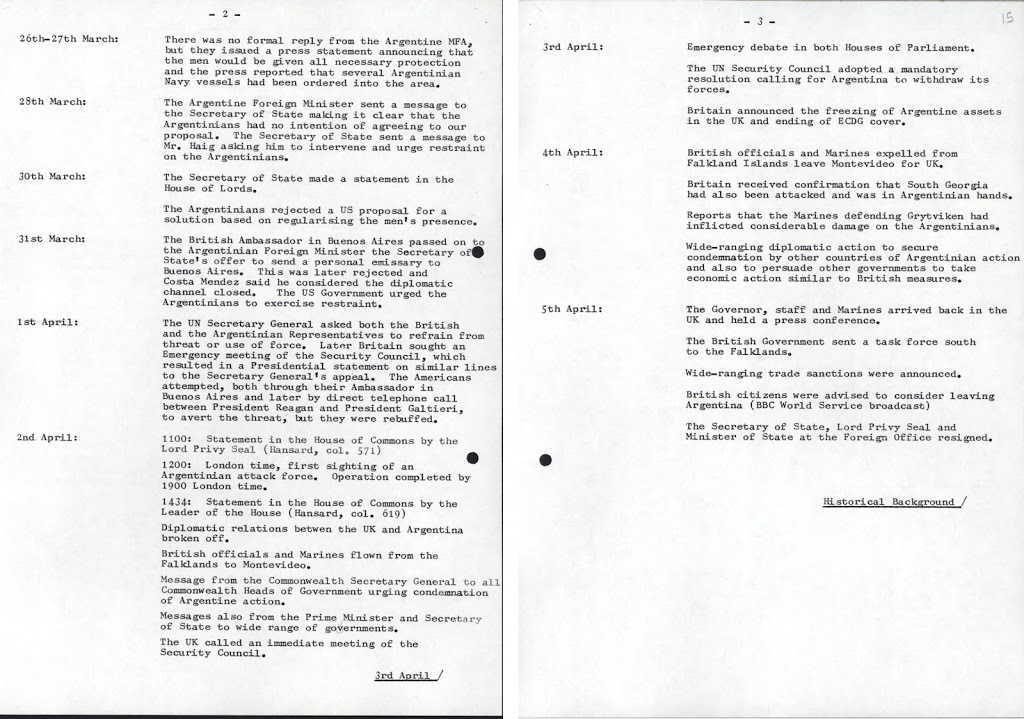 Above, an early CRD/International Office Brief issued shortly after the beginning of the conflict provides background for those MPs going into the Falklands debate in the House of Commons on 7 April 1982. It covers the historical situation, the British response and international reactions. A second brief (not pictured), circulated later that month, provided background on the UN’s stance, international opinion and the sequence of events (CRD/B/14/5). 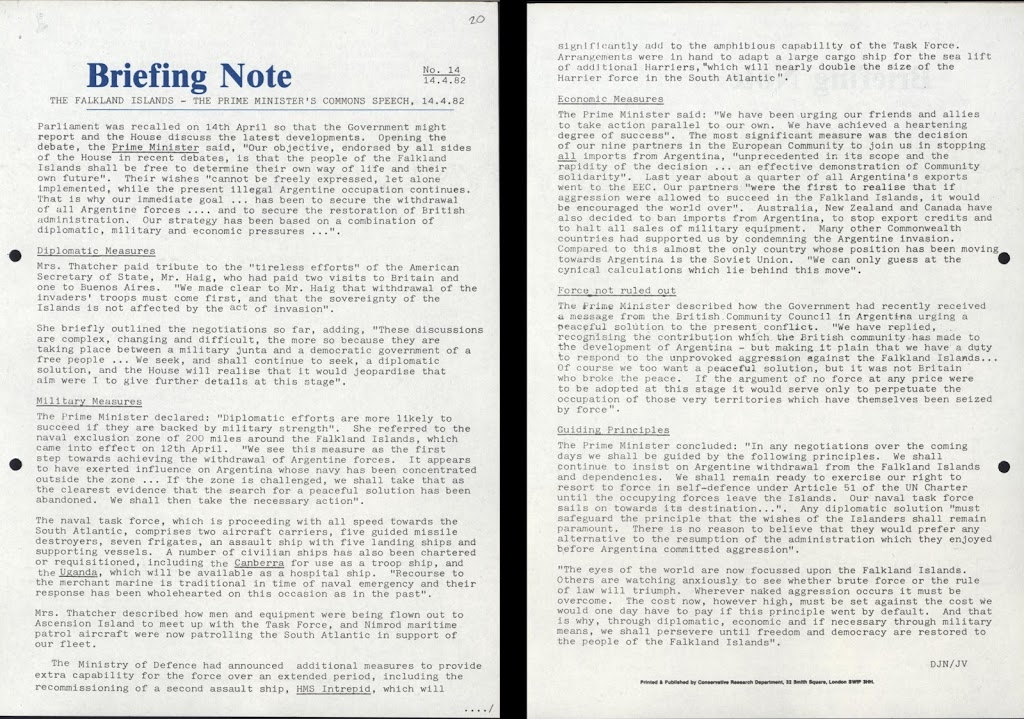 This Briefing Note published by the Party gives highlights of the Prime Minister’s speech to the Commons on 14 April 1982. Mrs. Thatcher opened with the words:

‘Our objective, endorsed by all sides of the House in recent debates, is that the people of the Falkland Islands shall be free to determine their own way of life and their own future.’

She closed by expressing her determination to combat any aggression in the islands:

‘The eyes of the world are now focussed upon the Falkland Islands. Others are watching anxiously to see whether brute force or the rule of law will triumph. Wherever naked aggression occurs it must be overcome. The cost now, however high, must be set against the cost we would one day have to pay if this principle went by default. And that is why, through diplomatic, economic and if necessary through military means, we shall persevere until freedom and democracy are restored to the people of the Falkland Islands.’ 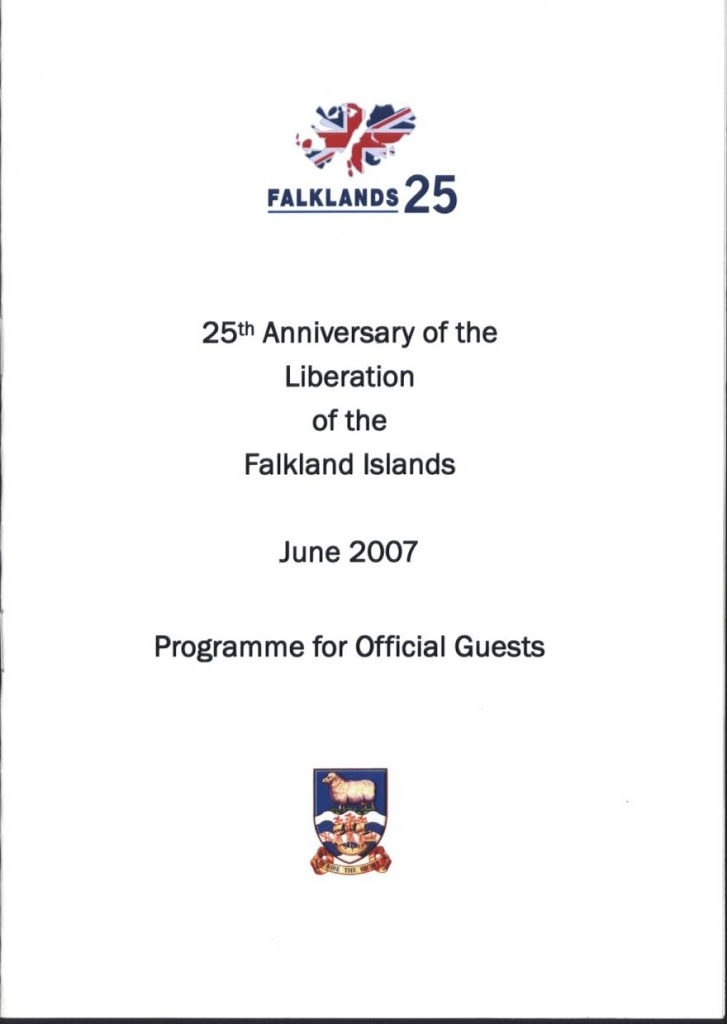 On the 25th anniversary of the Falklands conflict in 2007, former Conservative Party Chairman Cecil Parkinson travelled to the islands; these commemorative items are part of the papers he donated to the CPA.