Although 1962 was not the most significant year in terms of newly independent nations, it played an important role in a decade that marked significant changes to the British overseas presence.

Despite obvious changes around the Empire, there was some reluctance to support widespread independence for colonial nations. Macmillan’s 1960 ‘Wind of Change’ speech had signalled a shift in government attitude, but it was met with resistance at home. The Conservative policy had long been one of delay; the uncertainty of the 1959 General Election, the Suez Crisis and indeed fear of communism led many to believe that, as Sir Roy Welensky, then Prime Minister of the Federation of Rhodesia and Nyasaland, said, it was ‘essential to retain a permanent British foothold in Africa, which had now become the key continent in the East/West struggle’ (Conservative Commonwealth Affairs Committee meeting minutes, 13 July 1961 [CCO 507/1/1]). The 1950s and early 1960s saw the Labour Party portraying themselves as the progressive party when it came to the Empire; the Conservative Commonwealth Council noted, ‘To our own shame is the fatal image created by members of the British left wing, studiously uncorrected by their leaders, that the Labour Party would back the demands of Africans, however extreme, against the rights and position of ‘grasping’ Europeans’ (‘The Revolution in East Africa’ – East Africa Sub-Group, Conservative Commonwealth Council, Apr. 1960 [CCO 4/8/51]). 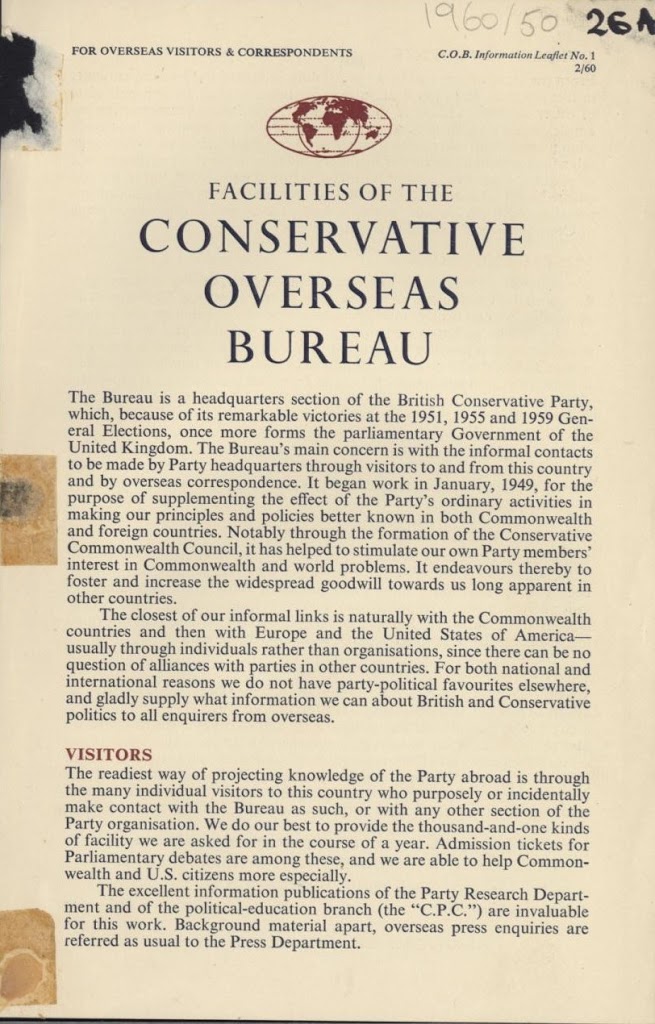 Despite this resistance, many within the Party supported independence – and many others, whatever their feelings, recognised its inevitability. Ian MacLeod, Secretary of State for the Colonies from 1957 to 1961, expressed frustration following the Congo’s 1960 independence from Belgium: ‘Do you know what that means? We are going to be the last in the colonial sphere instead of the first’ (Blundell, M., So Rough a Wind, London 1967, p. 221). 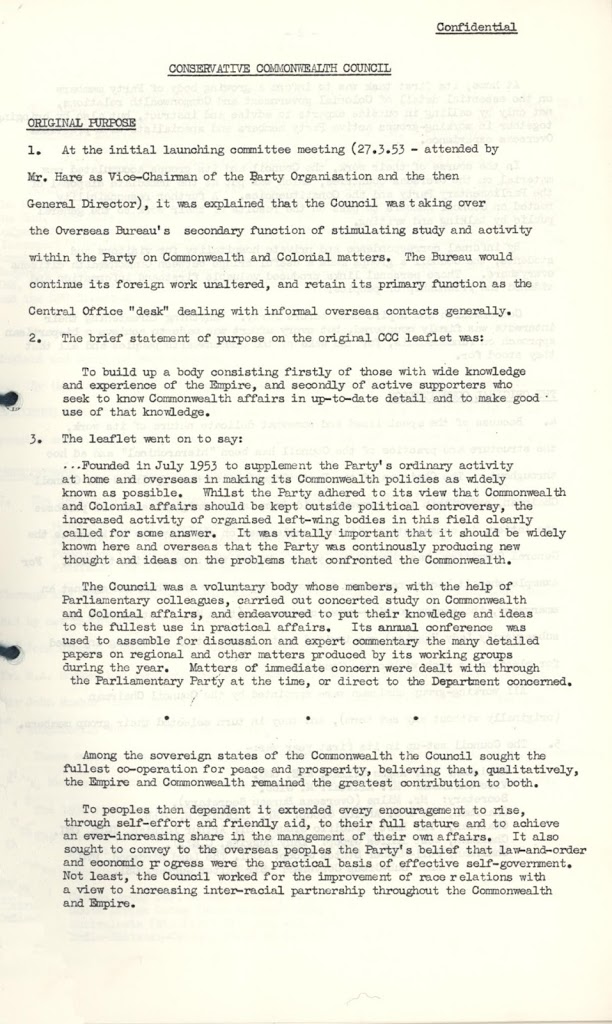 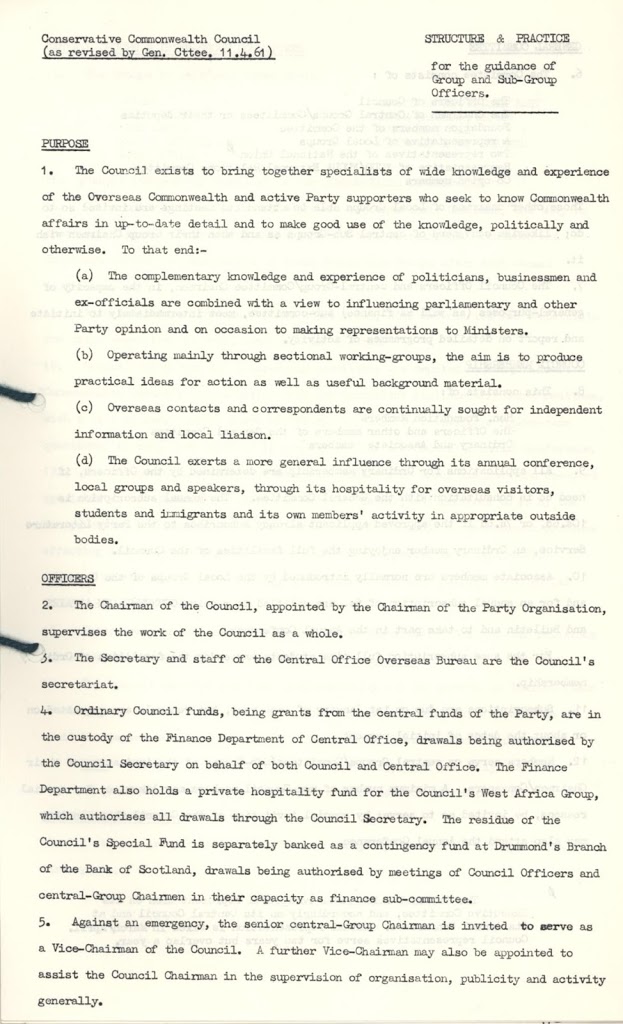 The Conservative Commonwealth Council was founded to take over the Overseas Bureau’s secondary function of promoting activity and study surrounding Commonwealth affairs (CRD 2/34/26).

1962 saw independence for Jamaica, Trinidad and Tobago and Uganda, as well as permission for Nyasaland (now Malawi) to secede from the Central African Federation (it gained independence in 1964). Committee notes and publications, both from within the Party and from the Commonwealth Council, indicated general support for viable independence. The Conservative Commonwealth Council’s March 1960 report on the British Caribbean Territories noted, ‘Thanks to progress already made and consolidated, only the attainment of economic and financial viability can be regarded as standing between the Federation and admission to Commonwealth membership, in addition to grant by the UK of full sovereignty’ (CCO 4/8/51). Jamaica declared independence on 6 June 1962, and Trinidad and Tobago followed on 31 August.

While the fate of the Caribbean colonies depended mostly upon economic and financial progress, Uganda’s required the resolution of political and ethnic conflicts. The Uganda Independence Conference was held in June in London to address issues such as uniting the country’s tribal kingdoms, drafting the constitution and a fiscal policy and, most controversially, governing the ‘Lost Counties’. Although the conference was successful overall, the final issue – a dispute between the Kingdoms of Buganda and Bunyoro over territory – went unresolved. Following House of Commons debate, the Ugandan Independence Bill passed, granting Uganda its independence on 9 October 1962. 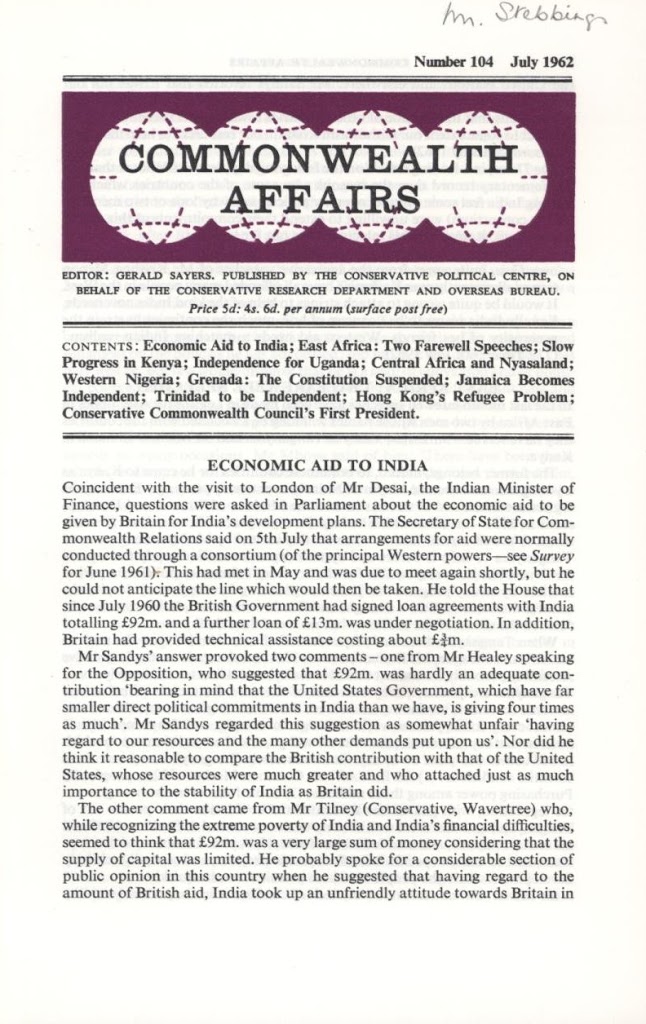 Commonwealth Affairs (July 1962) was published by the CPC on behalf of the Overseas Bureau. The issues of the 1960s often dealt with independence (PUB 136/3).

In addition to the three official independence bills, 1962 saw political conversations focus on the future of Kenya, which was granted independence in December 1963, and of the Central African Federation, which dissolved in 1963. All of the UK’s African colonies – with the exception of Southern Rhodesia – had achieved independence by 1968, and many of those in the Caribbean, South America and the South Pacific followed over the 1970s and 80s. Britain still maintains sovereignty over 14 overseas territories.