As part of the Saving Oxford Medicine blog we will be tracing the distinguished careers of the Bodmers. Currently being catalogued, the archive of Sir Walter includes a significant number of papers relating to his time at Oxford University, both during his earlier career as Professor of Genetics from 1970-79, and later, as Principal of Hertford College from 1996. The archive also comprises the papers of Sir Walter’s wife, the economist and geneticist Lady Julia Gwynaeth Bodmer.

In our previous post we saw a picture taken of Professor Kenneth Franklin and his colleagues outside the old Physiology Laboratory in 1894. Moving forwards to a later generation of Oxford scientists we have a picture taken outside the same building on South Parks Road.

The group picture below shows Oxford’s first Professor of Genetics Sir Walter Bodmer (back row, fourth from right) and his colleagues outside the staff entrance of the Genetics Laboratory, which he headed. Julia Bodmer also worked in the laboratory, also pictured (middle row on steps, far right). The Genetics Laboratory would later become the Walter Bodmer Building, now demolished. 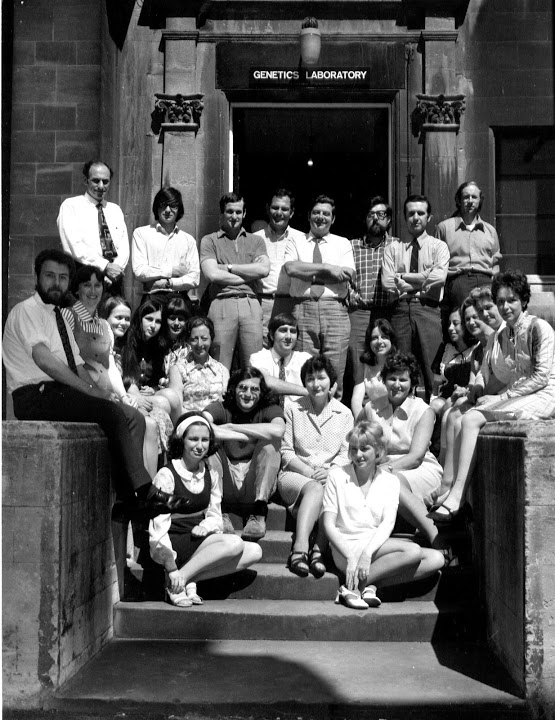 Sir Walter Bodmer (back row, fourth from right) and his colleagues outside the staff entrance of the Genetics Laboratory

In addition to fully representing the development of Sir Walter and Lady Bodmer’s laboratory research into human tissue histocompatibility antigens, the archive also illustrates the development of genetics as an academic discipline at Oxford University. In 1969 the University made the decision to create a chair of genetics after the retirement of geneticist Edmund Brisco Ford, who held a personal chair. Likewise, the distinguished geneticist and Professor of Botany Cyril Darlington was close to retirement. (Follow the links to learn more about the archives of both men, which are available for access at the Bodleian.)

Prior to this period there had been relatively little in the way of genetics available to Oxford students and it was felt that the discipline should be established on a more permanent teaching basis. Upon arrival in Oxford it was left to Bodmer to decide what department genetics would be allied with; zoology, botany or biochemistry. As a molecular biologist increasingly moving towards biochemical work, he chose to bring this newly created sub-department of genetics within the Department of Biochemistry. In his capacity as Professor of Genetics, Bodmer and his colleagues held the responsibility of all genetics teaching at undergraduate level, from medical students to biochemists and biologists. By Sir Walter’s own description, himself and his colleagues “built up a small lively department, with interests in biochemical genetics…and human genetics”.