A large proportion of the files released this year consist of Conservative Central Office’s files on local Conservative associations. With a file on virtually every constituency, spanning the period 1971-1982, a great deal can be gleaned on developments in local Party organisation in the 1970s. The files tell us not only about the selection (and occasional de-selection) process for choosing the Party’s next parliamentary candidate in each constituency, but also include the often very frank and critical assessments by Central Office’s Area Agents on the efficiency or otherwise of the local organisation, not to mention reports of local disputes which they were frequently called upon to resolve.
Hidden in these files are to be found the origins of Lord Patten’s parliamentary career – who as Chris Patten was working in the Conservative Research Department  – that same route to a parliamentary career taken by the current Prime Minister. As the files  on Lambeth [CCO 1/16/1/1] and Bath [CCO 1/16/10/12] constituencies show,  Lord Patten’s future distinguished career as a Conservative Cabinet Minister, Party Chairman and the last Governor of Hong Kong, was by no means certain as he struggled to enter Parliament.  Selected as Conservative Parliamentary Candidate for Lambeth in June 1973, Patten fought and lost the 1974 election. By this time Director of the Conservative Research Department, he faced a gruelling selection process to become Prospective Parliamentary Candidate for Bath in 1977 and finally MP in 1979.
In Kingswood [CCO 1/16/10/6], newly carved out of South Gloucestershire, Bristol North East and Bristol South East constituencies following boundary changes in 1971, Alderman Charles G Irving was adopted as its first  Parliamentary Candidate in June 1972, in which capacity he fought and lost both 1974 general elections, standing down in 1975. Controversially, the former Liberal Parliamentary Candidate for Kingswood, Councillor Jack Aspinall, who had been re-adopted as the Liberal candidate only in August 1974, then resigned from the Liberal Party and joined the Conservative Party in time to put himself forward as Irving’s successor during the ensuing selection process. However, he failed in his attempt, losing out to Stephen Terlezki, a veteran opponent of Jim Callaghan in South Wales during both 1974 elections, who was finally adopted on 14th August 1975. But, in a surprise twist of fate, by November Terkezki had been encouraged to resign triggering another selection process for the Kinswood Association, which Aspinall won, although not without resulting in several membership resignations. Aspinall went on to win Kingswood from Labour at the 1979 general election by 303 votes. 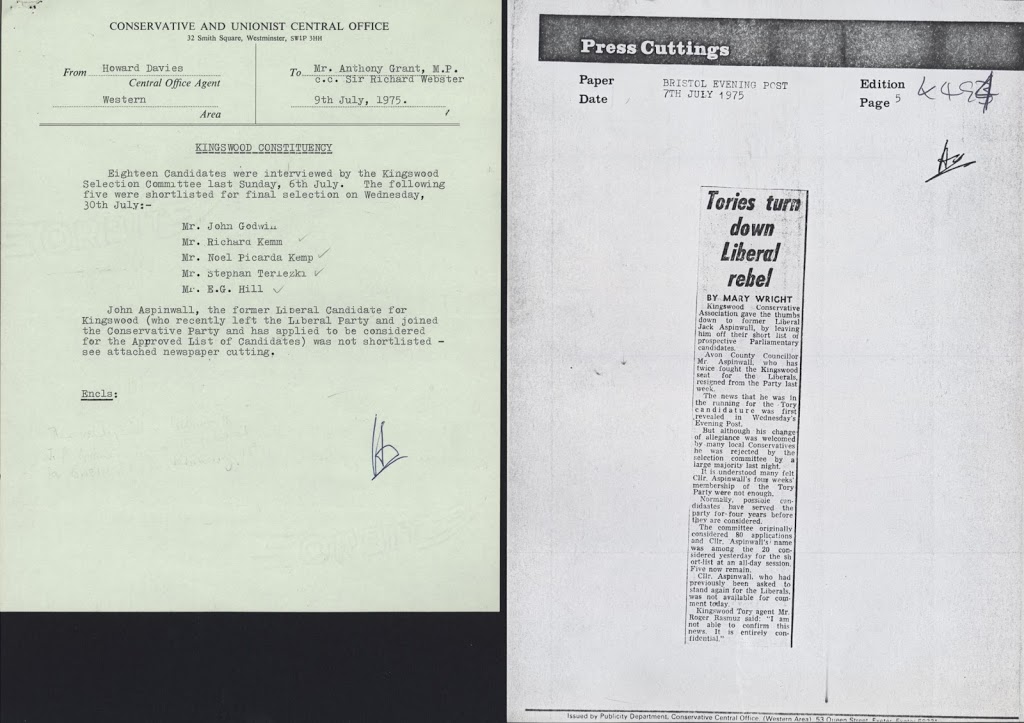 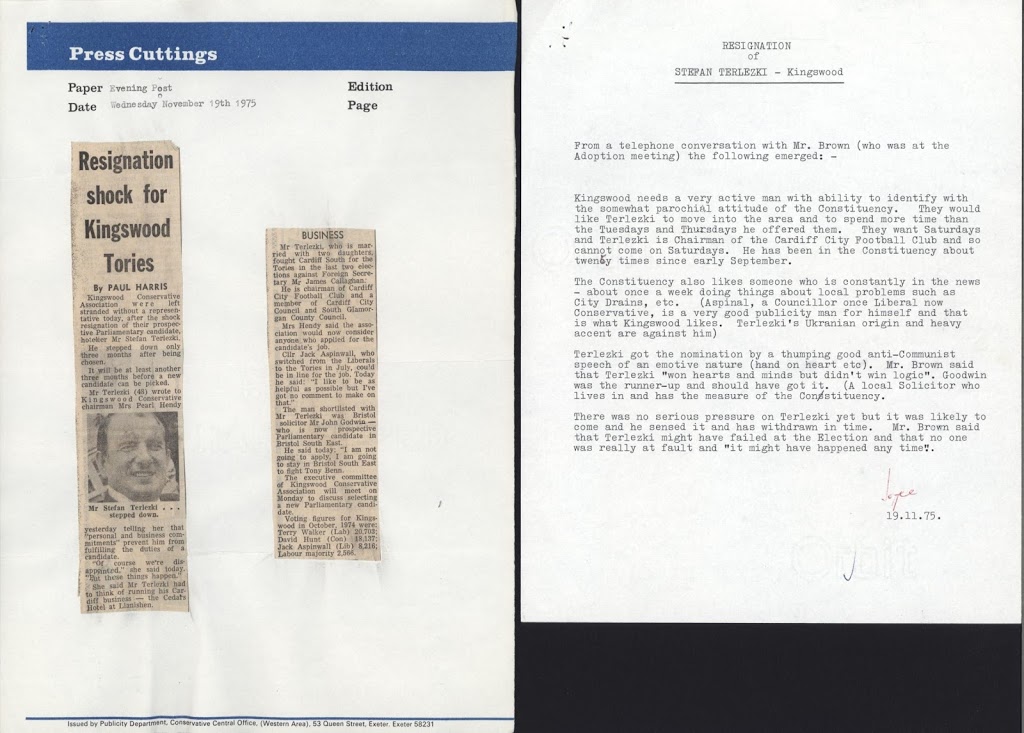 Meanwhile in Eastbourne [CCO 1/16/8/12] there was considerable manoeuvring to replace not only the long-standing constituency chairman, Brigadier EWC Flavell but also the sitting Conservative MP Sir Charles Taylor, who had served the constituency since 1935. Flavell’s removal was achieved at the Association’s AGM in March 1971 which was attended by nearly 200 members and, according to the Eastbourne Gazette, was ‘one of the biggest upsets in Tory circles for more than 20 years’. Closely allied to Sir Charles, the MP himself was under threat, aided by his own indecision over whether to stand at the next election, which saw him de-selected and the anomalous situation of an alternative parliamentary candidate being selected in anticipation of a 1972 general election, while Sir Charles held onto the seat until the election was actually called in February 1974. 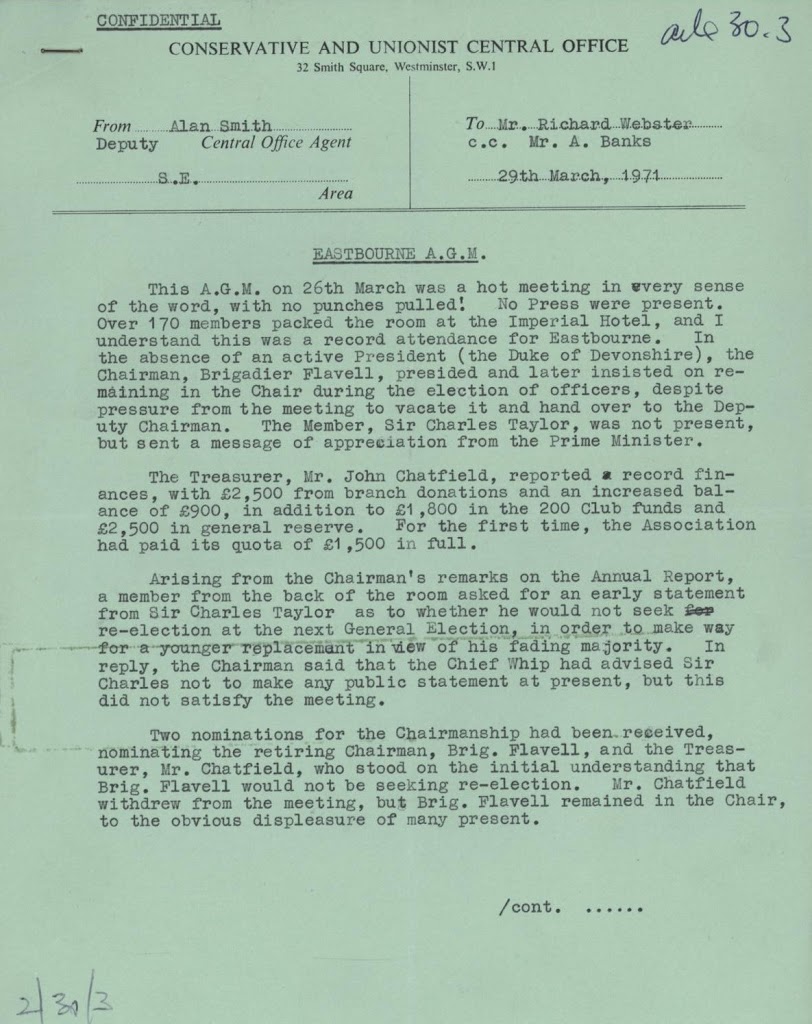 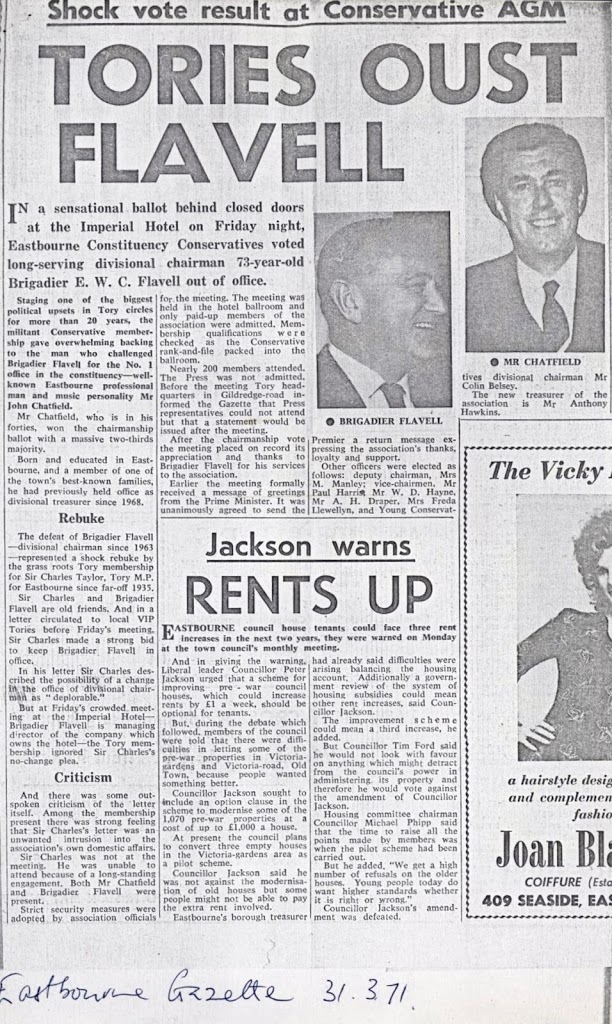 The newly-released files also provide insight into the political issues facing the Conservatives 30 years ago, with the parallels that they have with today. The emergence of a 4thsignificant political party in British politics – in this case the SDP – was still very much a concern for the Conservatives after its by-election successes in 1981 as was demonstrated during the Glasgow Hillhead by-election of 25thMarch 1982 [CRD 4/34/39]. 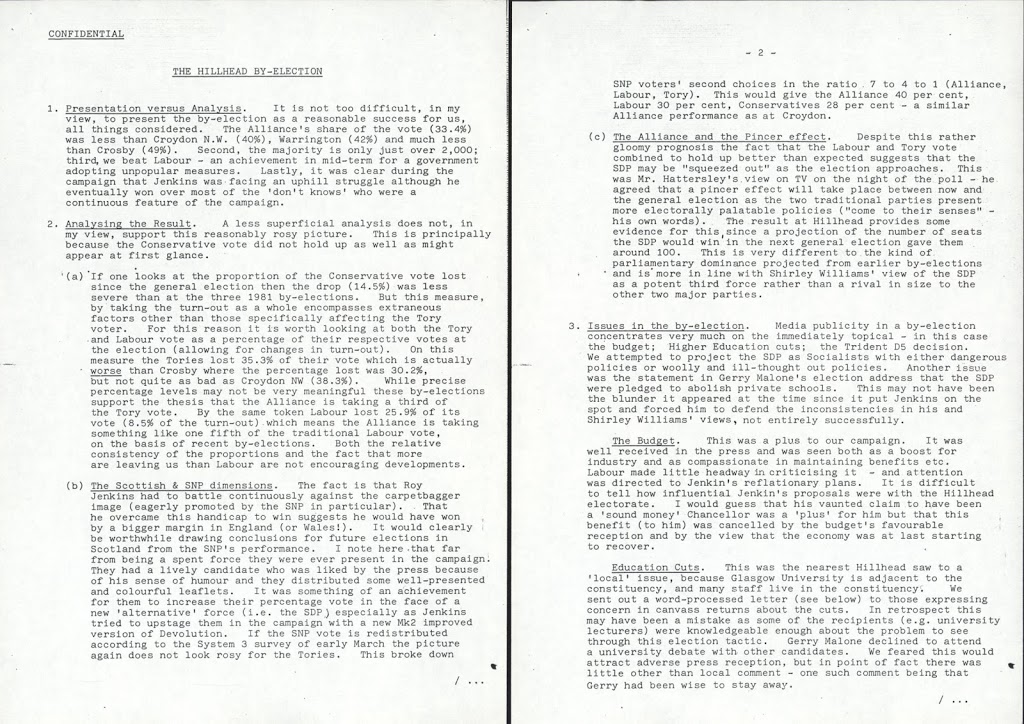 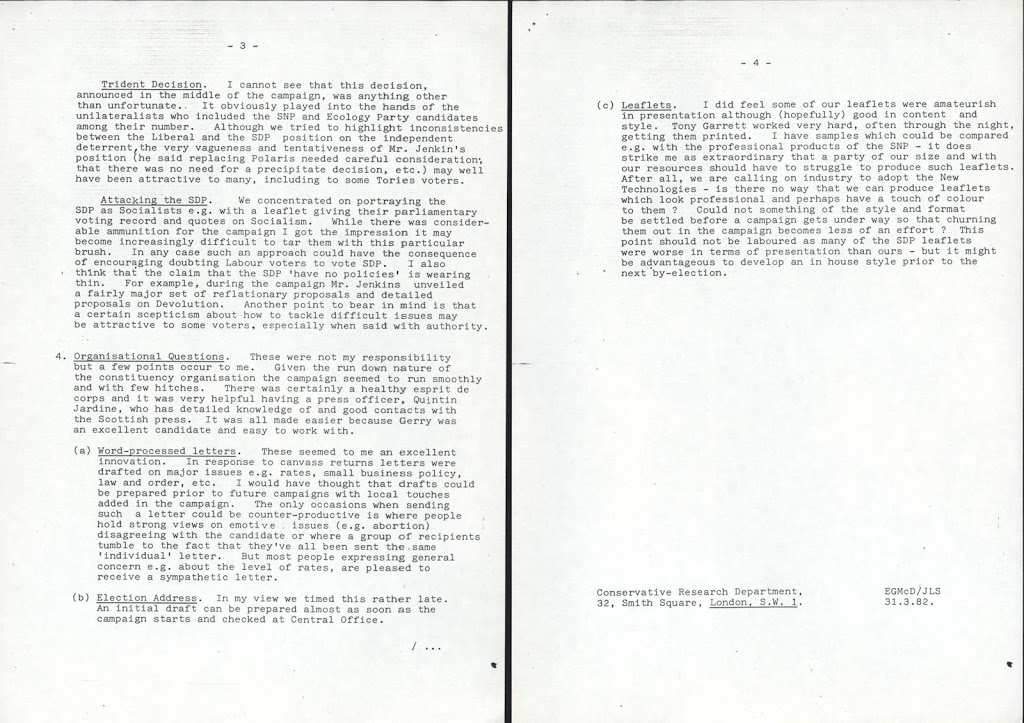 The Conservative Research Department’s ‘SDP Monitoring Group’ [CRD 4/16/8] reported that the initial wave of defections to the SDP had now stopped and its membership was holding steady at 78,000; it was holding together well but tensions over funding and with their Alliance partners over division of seats were being discerned.     Roy Jenkins, the last of the SDP’s original ‘gang of four’ to secure a parliamentary seat, caused mid-term upset for the Conservatives when he contested and won Glasgow Hillhead, which had been held by the Conservatives since 1948. 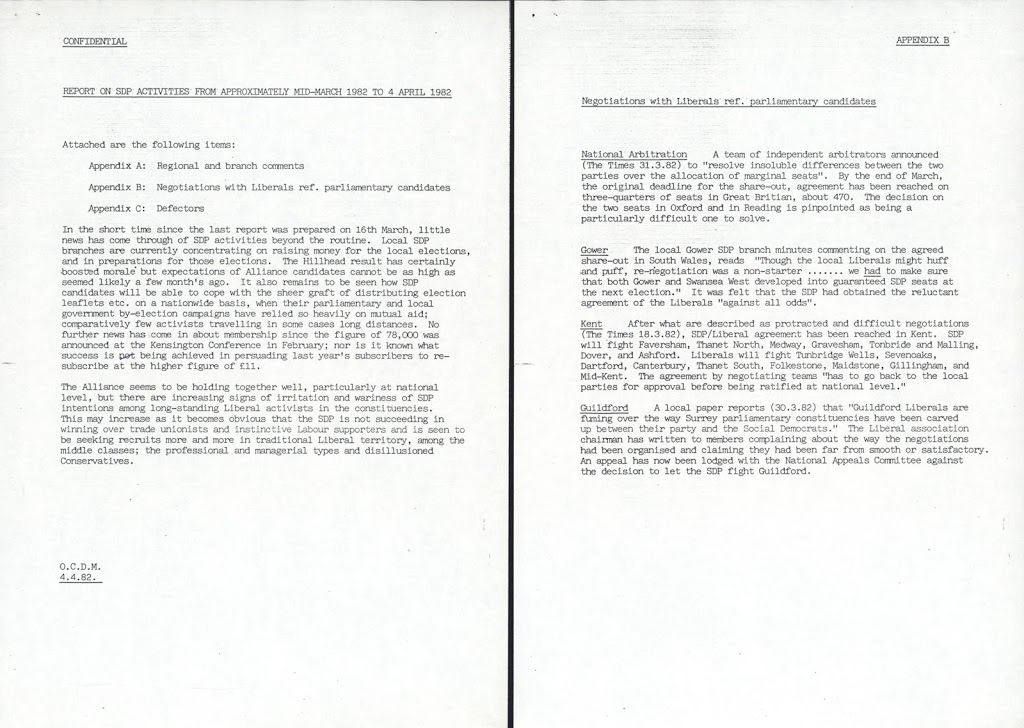 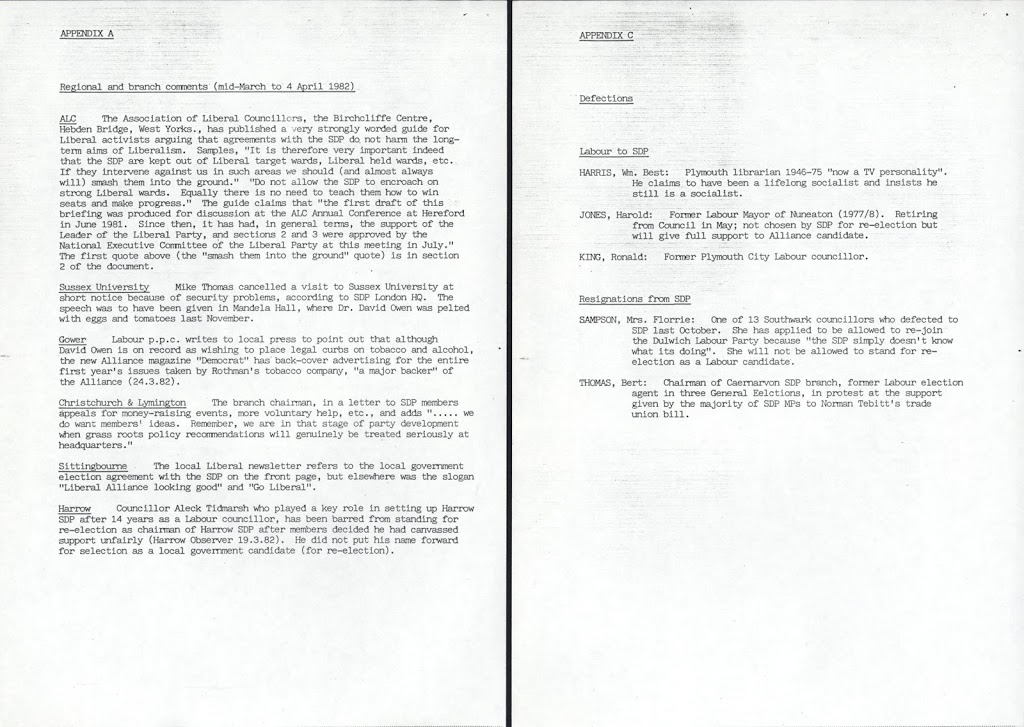 Anticipating the Greenham Common Peace Protests, a Conservative Research Department memorandum to the Party Chairman of 22nd January 1982 warns of the prospect of increasing militancy of disarmament groups during 1982, in particularly CND, European Nuclear Disarmament and the World Disarmament Campaign, in spite of the Soviet crackdown in Poland [CRD 4/18/11]. The first blockade of the base against the decision to deploy cruise missiles took place in May 1982 by 250 women, and by December, 30,000 women linked hands around its perimeter. 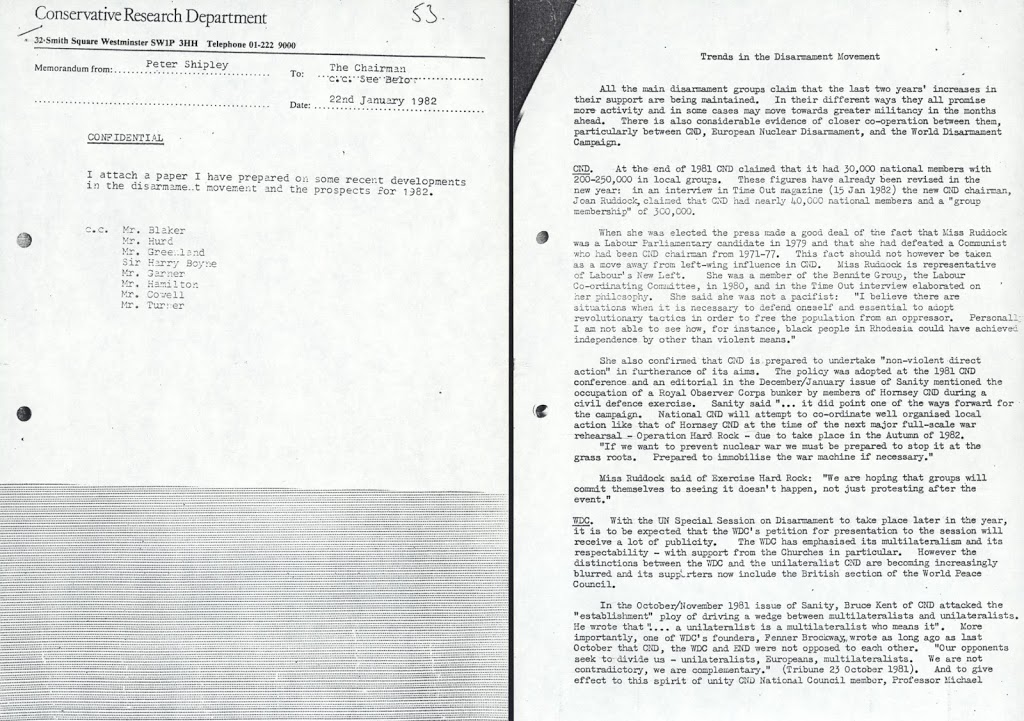 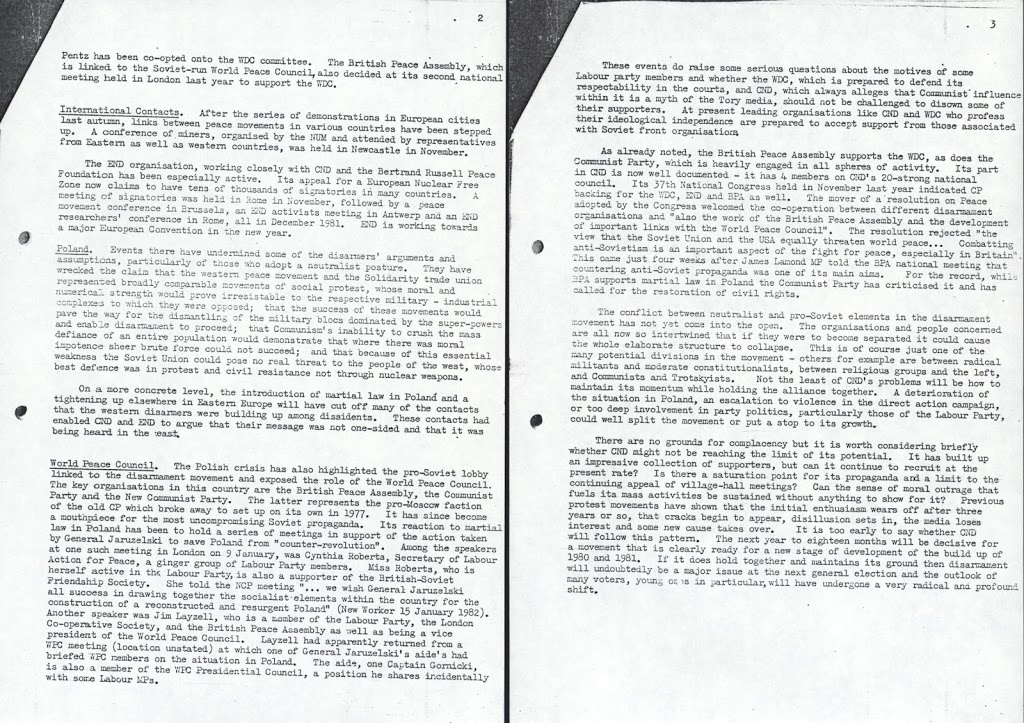 Other files testify to the Conservative Party’s little-known international dimensions. Through its Conservative Overseas Bureau (from 1973, the Conservative Party’s International Office) the Party made contacts with like-minded centre-Right political parties elsewhere in Europe and the world and gave encouragement to the development of parliamentary democracy in countries emerging from totalitarian regimes. Typical of this work, as documented in the country case files now released, is the visits by Conservative Party representatives, along with French and German Christian-Democrats, to Portugal [IDU 29/1], and the reports sent back of the problems facing the Centro Democrático e Social – Partido Popular (CDS). The CDS was founded in 1974 during Portugal’s Carnation Revolution and by 1976 had secured 33,000 candidates and won 42 of the 230 parliamentary seats available:  ‘They are clearly immensely grateful for the help and encouragement which we have given them.’ 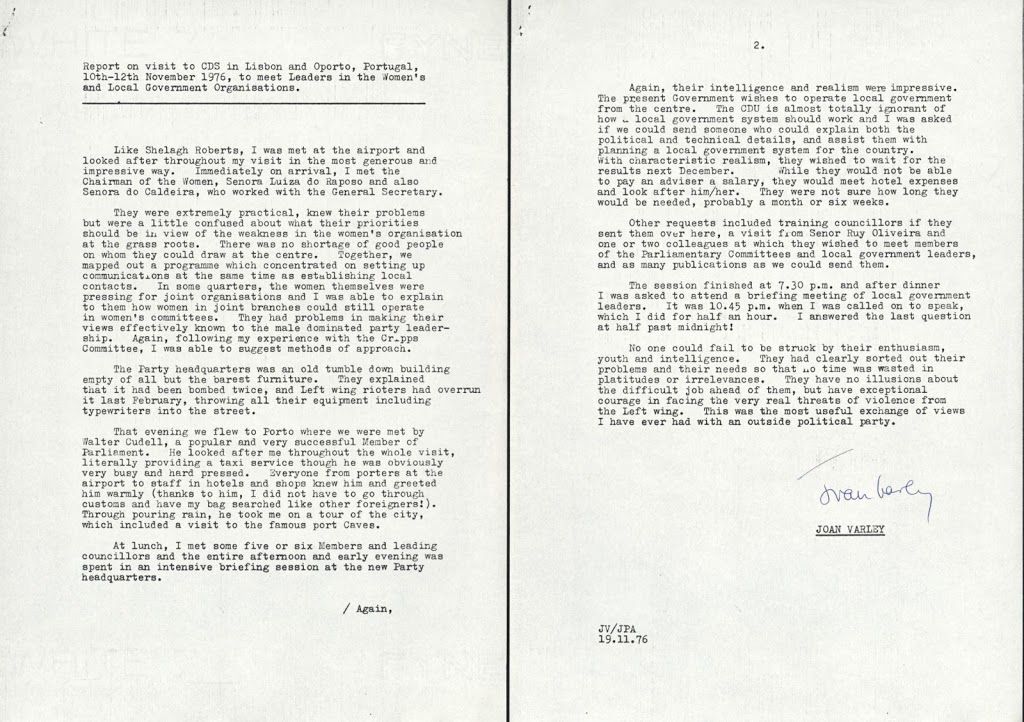 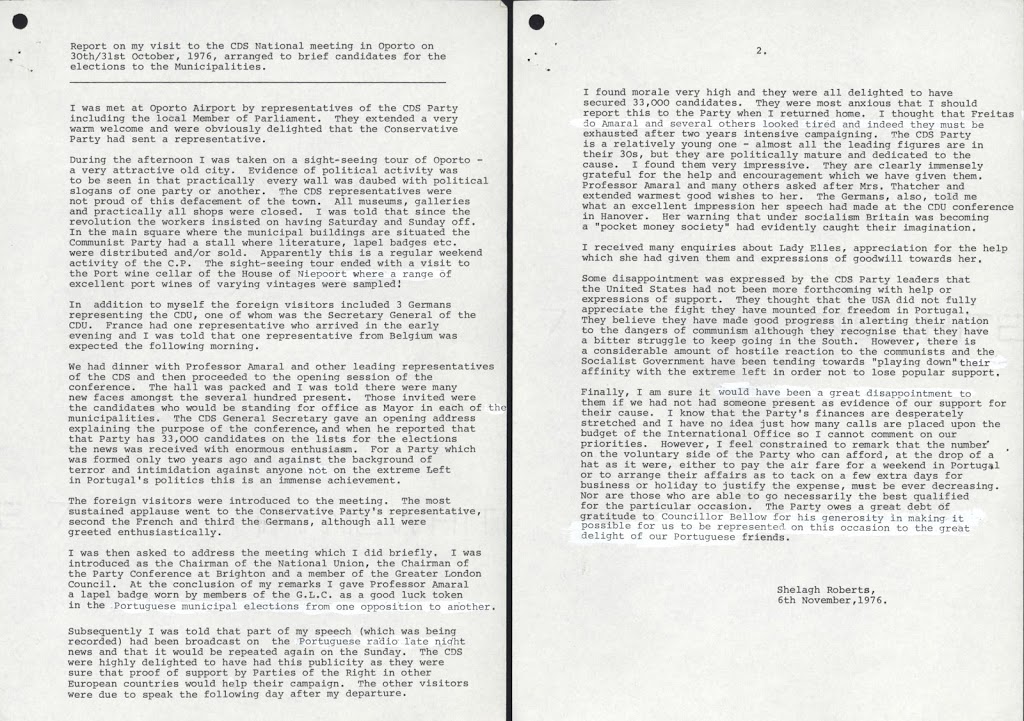 All of these files and many more can be consulted by appointment at the Bodleian Library in Oxford.