Lady Thatcher, who died on Monday, was part of a distinguished line of twenty six British Prime Ministers educated at Oxford University, where she studied Chemistry at Somerville College between 1943-1947 under the supervision of Dorothy Hodgkin, with whom she continued an occasional correspondence well into the 1980s (Hodgkin Papers, and Additional Hodgkin Papers, Bodleian Library).

Her political career is fully captured in documents held within the Conservative Party Archive at the Bodleian, from canvassing in Oxford during the 1945 General Election campaign and her tenure as President of the Oxford University Conservative Association in 1946, through her long struggle for election to Parliament, her holding of a range of junior Ministerial and Opposition posts from 1961 leading to her appointment to Heath’s Shadow Cabinet in 1967, as Education Secretary in the 1970-1974 Conservative Government, Leader of the Conservative Party from 1975, and onward through her tumultuous period as Prime Minister, 1979-1990. 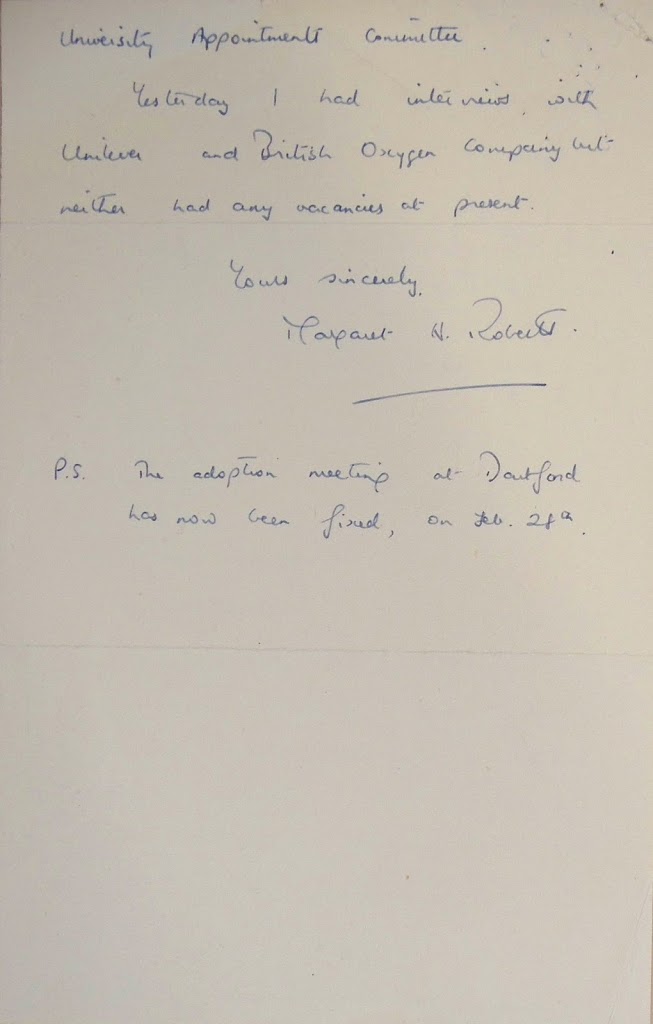 Letter from Margaret Roberts to Conservative Party Vice-Chairman Miss Maxse dated 15/02/1949 which accompanied her application form to become a Prospective Parliamentary Candidate. She mentions the rejections which she had received in response to applications for research posts with Unilever and the British Oxygen Company, as well as the forthcoming adoption meeting by Dartford Conservative Association. 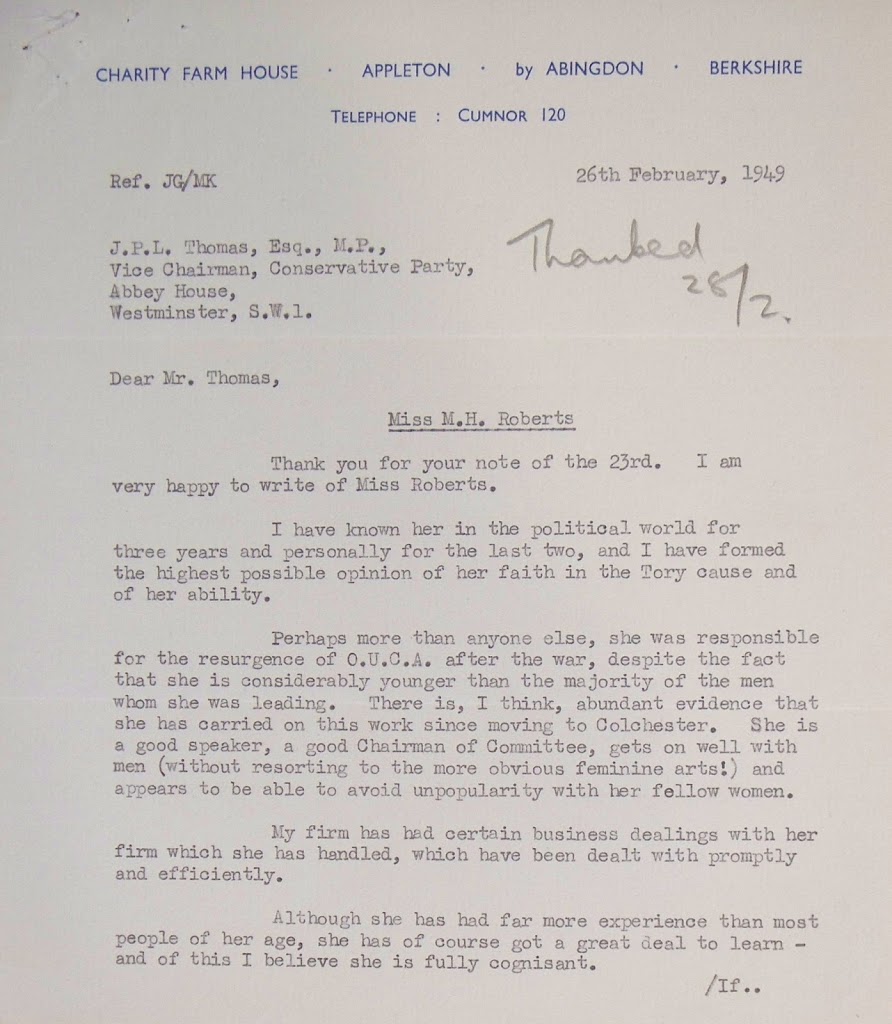 Reference from unknown source [2ndpage of letter missing] to JPL Thomas, Conservative Party Vice-Chairman supporting Margaret Roberts’ application to become a Conservative Parliamentary Candidate, 26/02/1949: ‘She is a good speaker, a good Chairman of Committee, gets on well with men (without resorting to the more obvious feminine arts!) and appears to be able to avoid unpopularity with her fellow women.’ 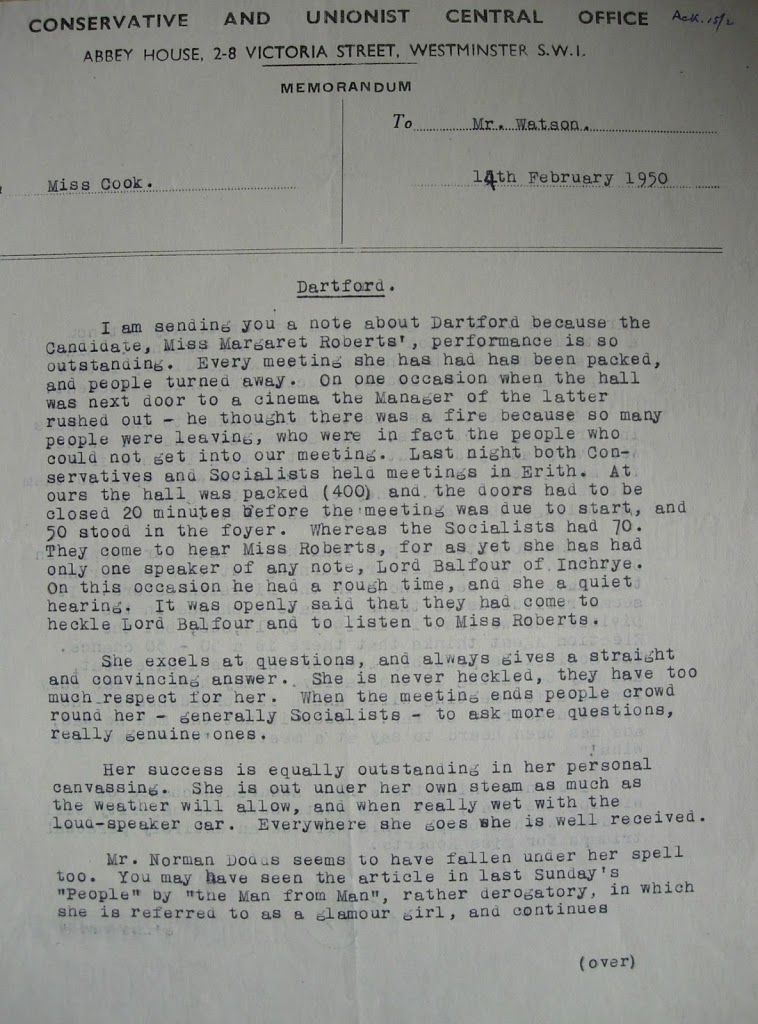 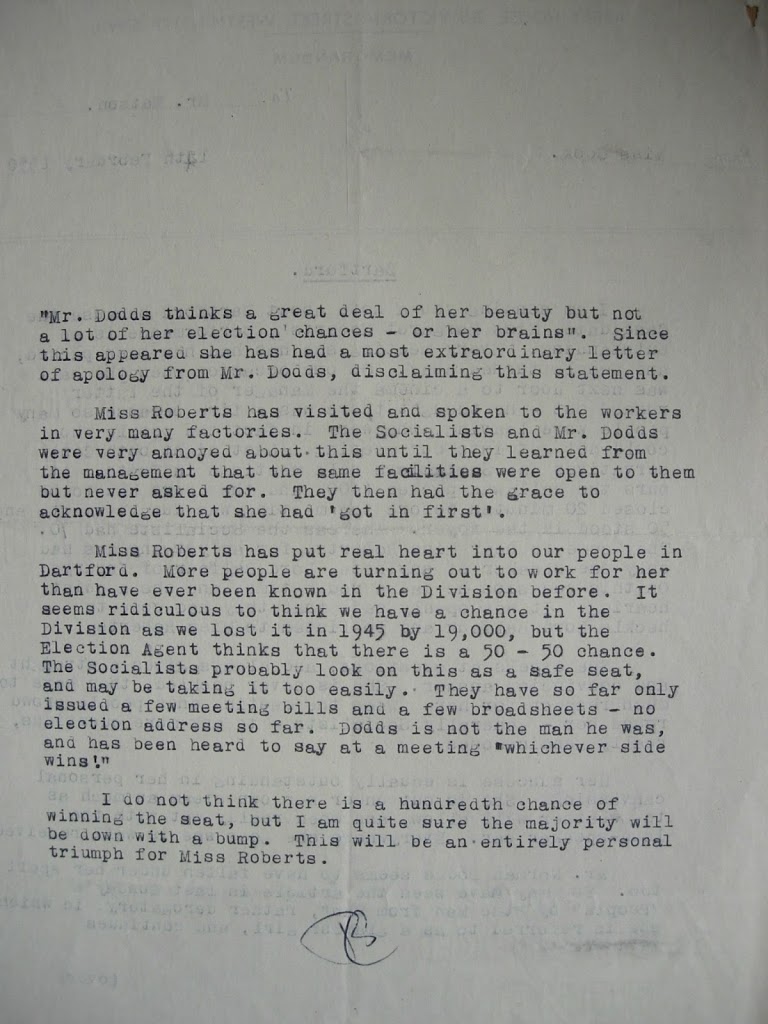 Memorandum from Home Counties South East Area Agent Miss Cook to Mr Watson, Chief Organisation Officer, Conservative Central Office dated 14/02/1950 concerning Margaret Roberts’ outstanding performance in Dartford during the 195 General Election campaign: ‘She excels at questions, and always gives a straight and convincing answer. She is never heckled, they have too much respect for her. When the meeting ends people crowd round her – generally Socialists – to ask more questions, really genuine ones.‘

Margaret Roberts’ election address, Dartford, 1950 General Election. She was the only female candidate at that election, and at that time, the youngest ever Conservative woman to stand. 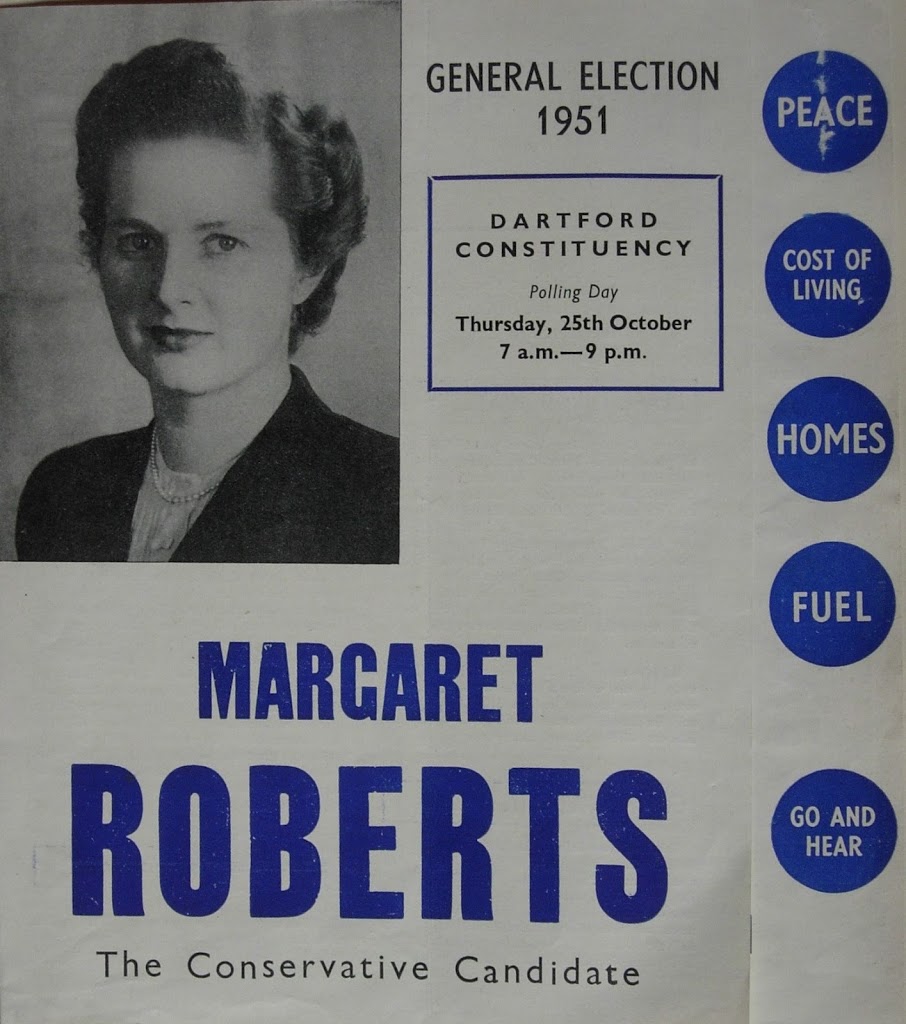 Margaret Roberts’ election address , Dartford, 1951 General Election. Despite her defeat in 1950 she was re-selected as the Conservative candidate. 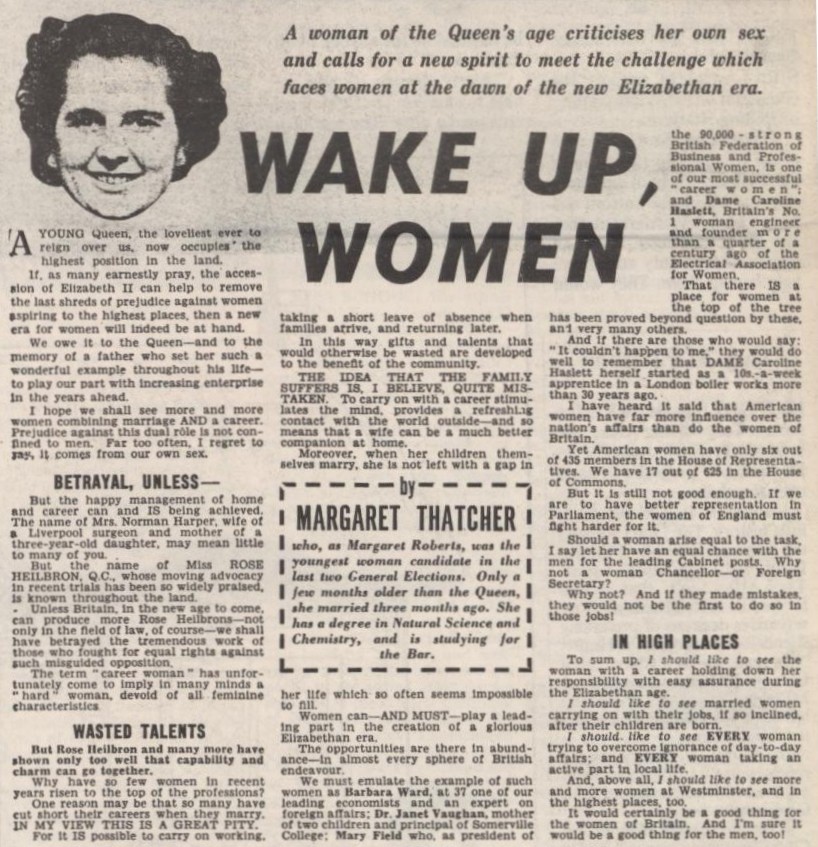 Article by Thatcher, ‘Wake up, Women’, published in the Sunday Graphic, 17/02/1952, advocating more women in the work-force and especially at Westmister 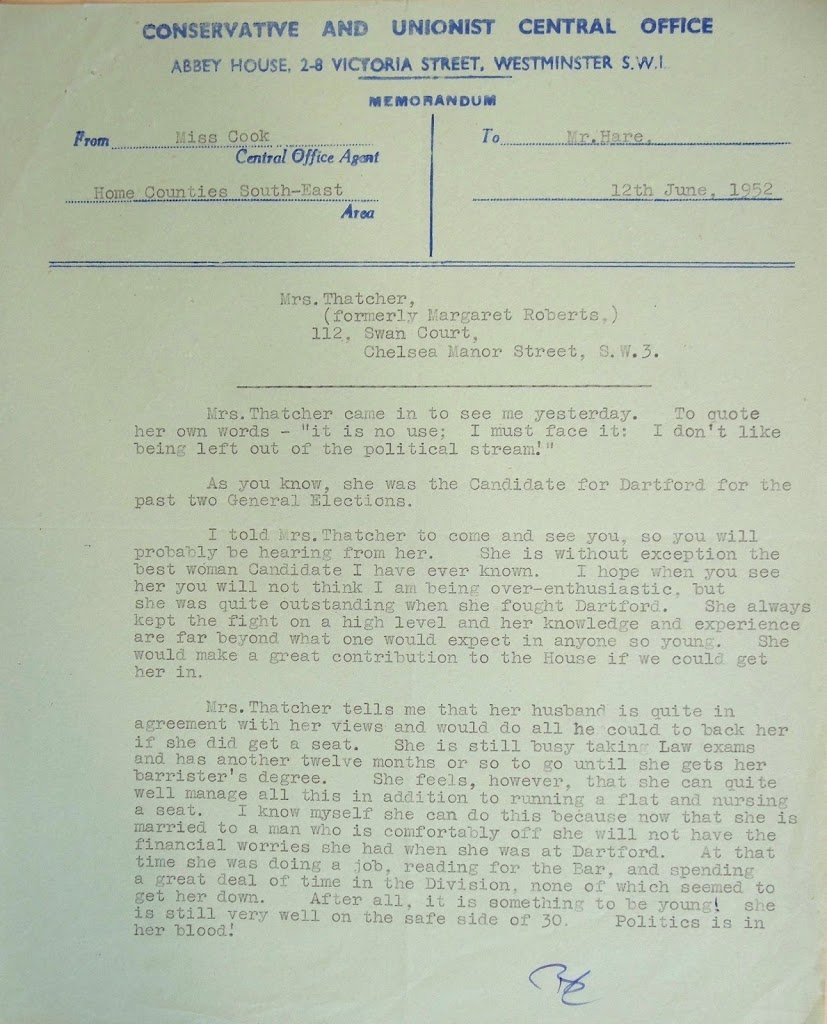 Memo from Area Agent Miss Cook to John Hare, Conservative Party Vice-Chairman, following her interview with Margaret Thatcher on 11/06/1952, concerning Thatcher’s renewed desire to become a parliamentary candidate following her marriage: To quote her own words – “It is no use; I must face it: I don’t like being left out of the political stream”. 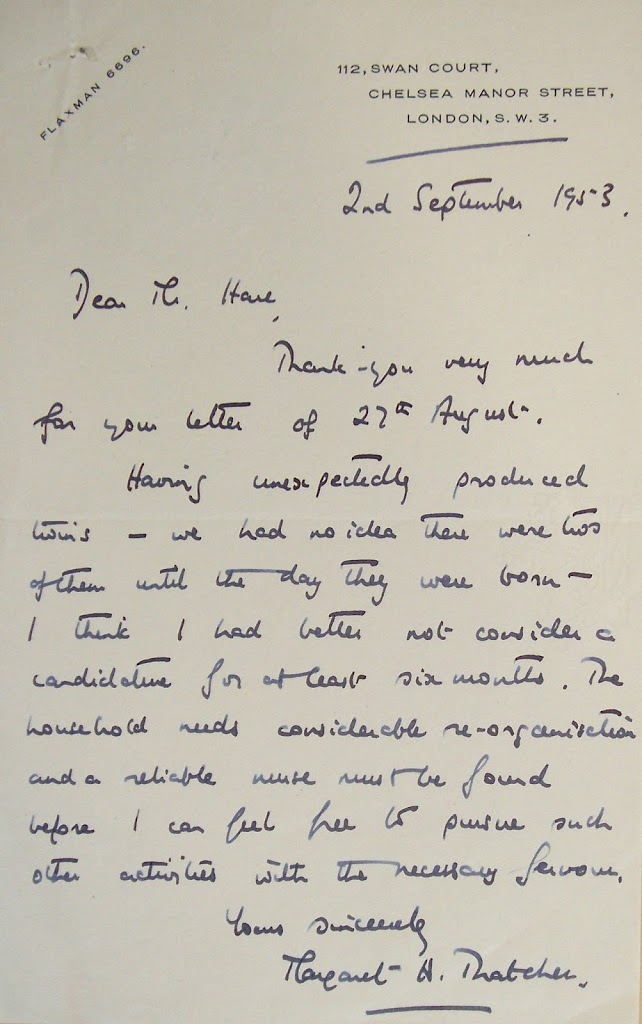 Letter from Thatcher to Hare dated 02/09/1953, temporarily withdrawing from politics following the birth of twins: ‘I had better not consider a candidature for at least six months’ 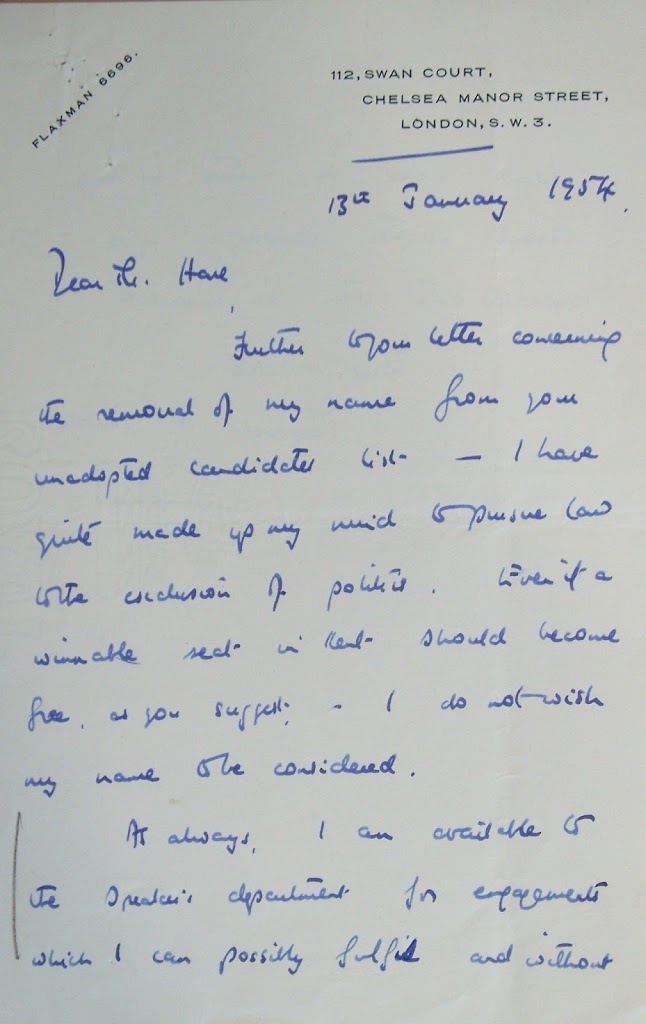 Letter from Thatcher to Hare dated 13/01/1954 withdrawing ‘permanently’ from politics: ‘I have quite made up my mind to pursue Law to the exclusion of politics. Even if a winnable seat in Kentshould become free, as you suggest – I do not wish my name to be considered.’ 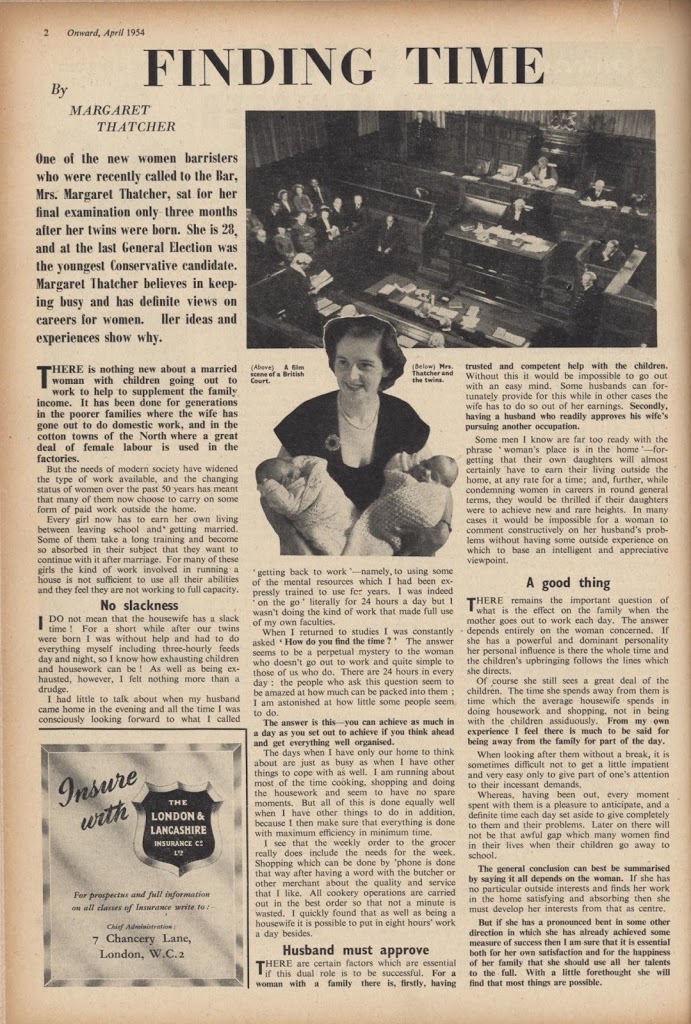 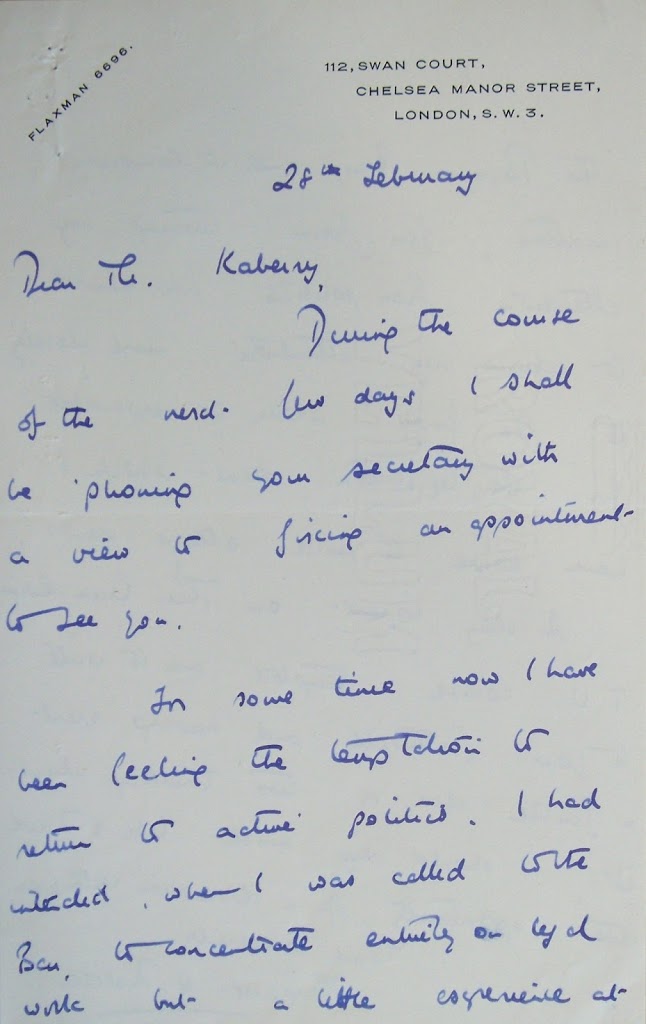 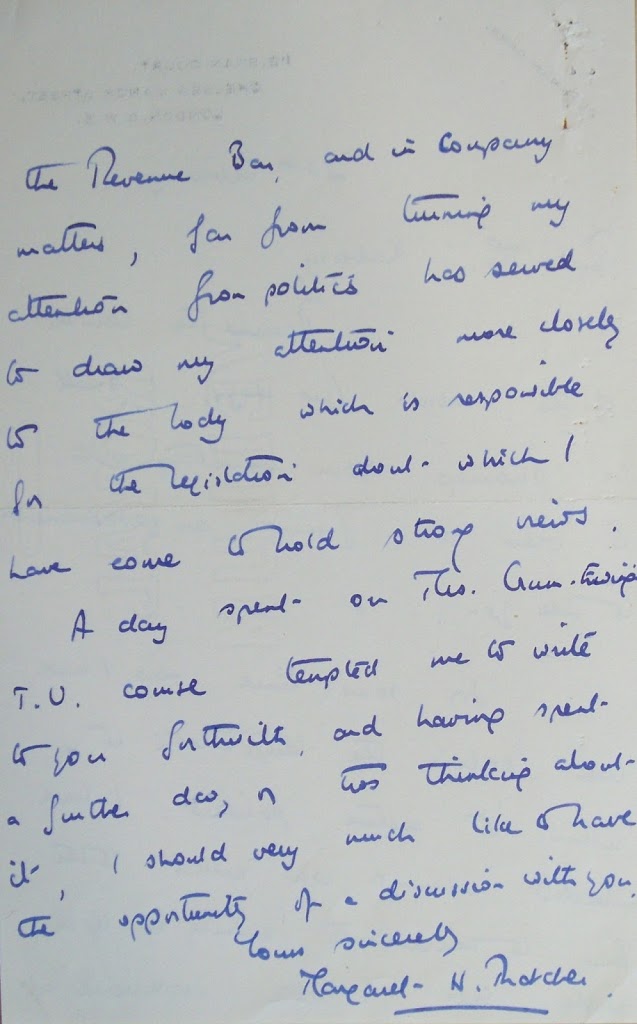 Letter from Thatcher to Donald Kaberry, Conservative Party Vice-Chairman dated 28/02/1956 concerning her desire to return to politics: ‘…a little experience at the Revenue Bar and in Company matters, far from turning my attention from politics has served to draw my attention more closely to the body which is responsible for the legislation about which I have come to hold strong views.’ 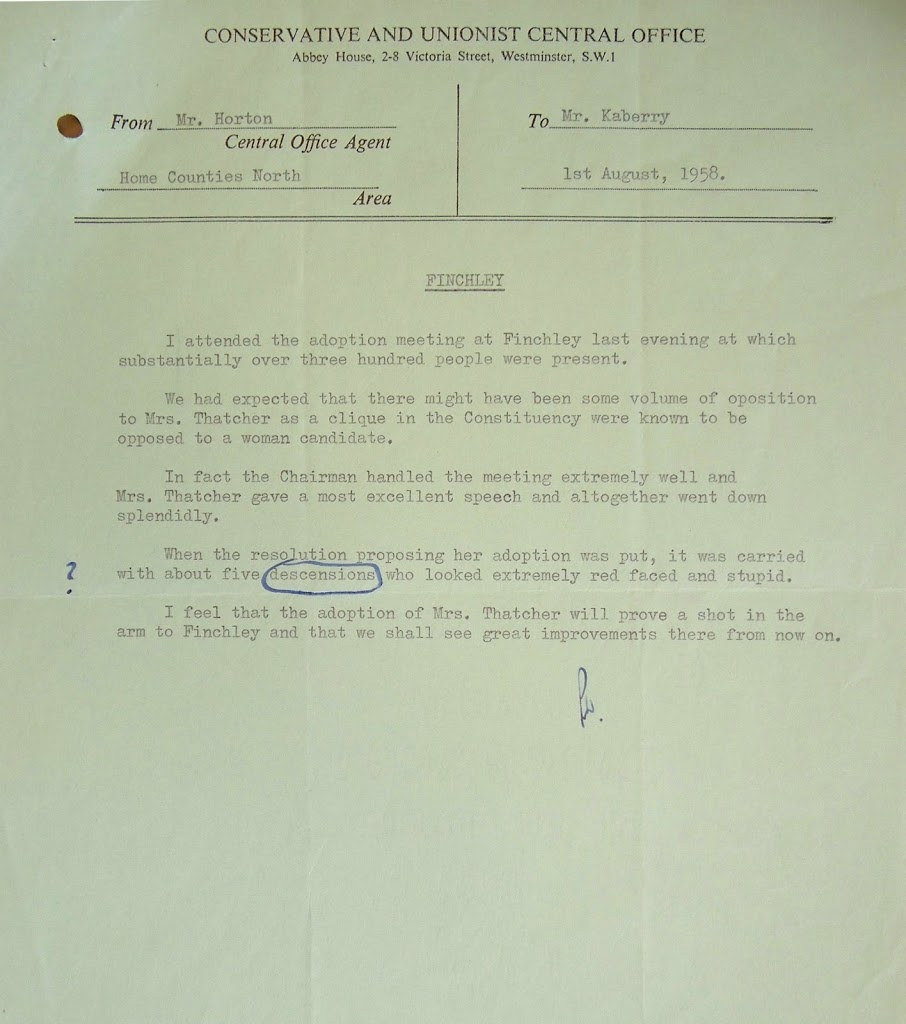 Memorandum, Home Counties North Area Agent PRG Horton to Kaberry dated 01/08/1958 confirming Thatcher’s adoption as parliamentary candidate by Finchley Conservative Association: ‘I feel that the adoption of Mrs Thatcher will prove a shot in the arm to Finchley and that we shall see great improvements there from now on.’ 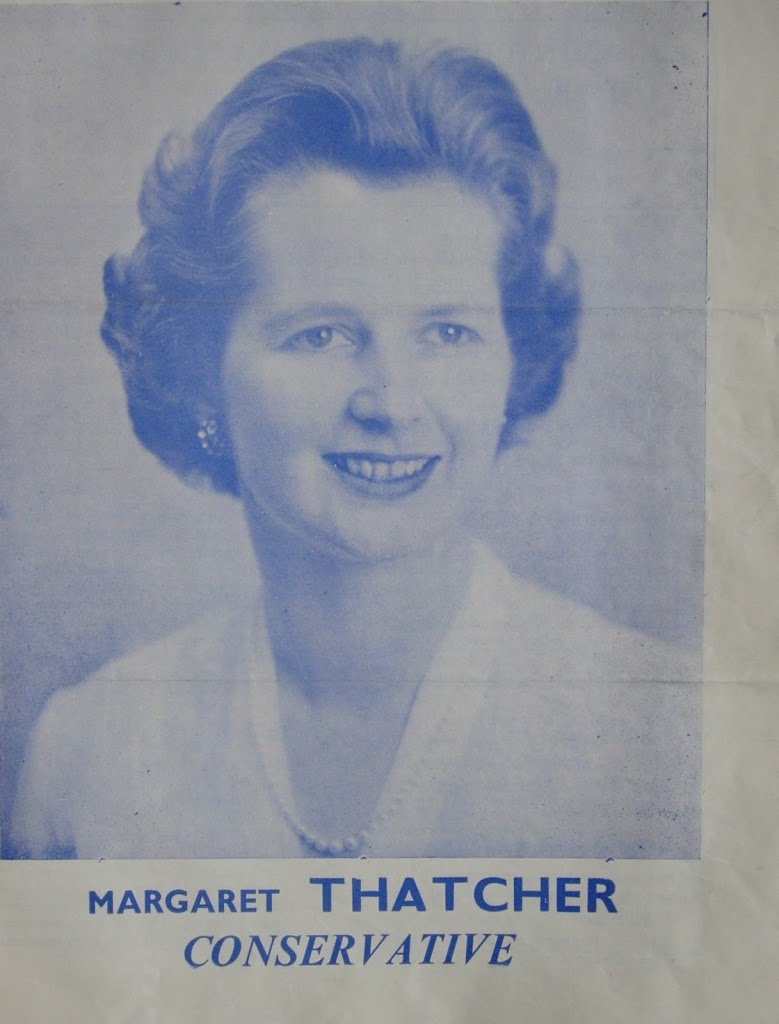 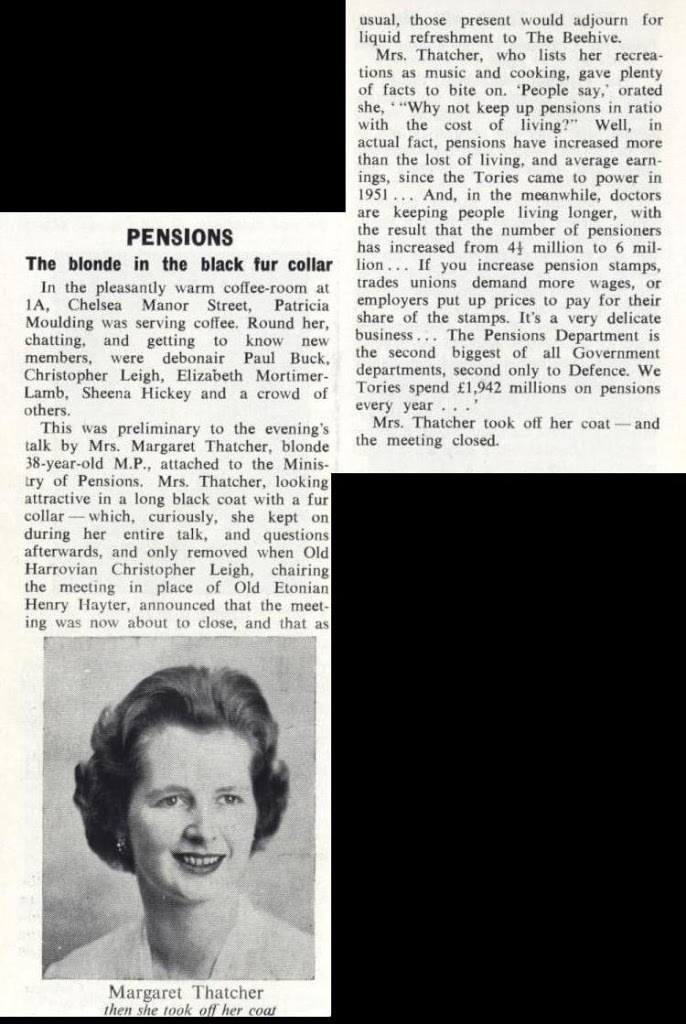 Report of a meeting of the Chelsea Conservative Association on the subject of pensions addressed by Mrs Thatcher – under the title, ‘The blonde in the black fur coat’, featured in Light, the magazine of the Chelsea Conservative Association, (Vol. 1, No. 1), Feb 1964. Mrs Thatcher had been appointed Parliamentary Under Secretary at the Ministry of Pensions and National Insurance by Macmillan in October 1961 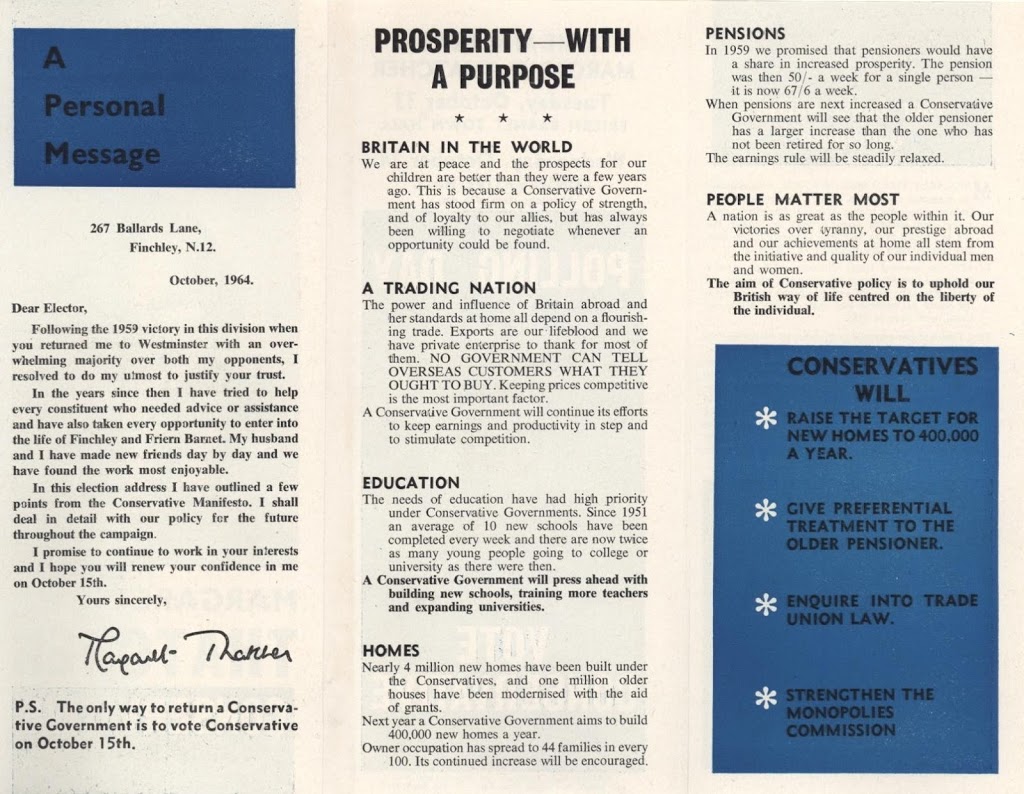 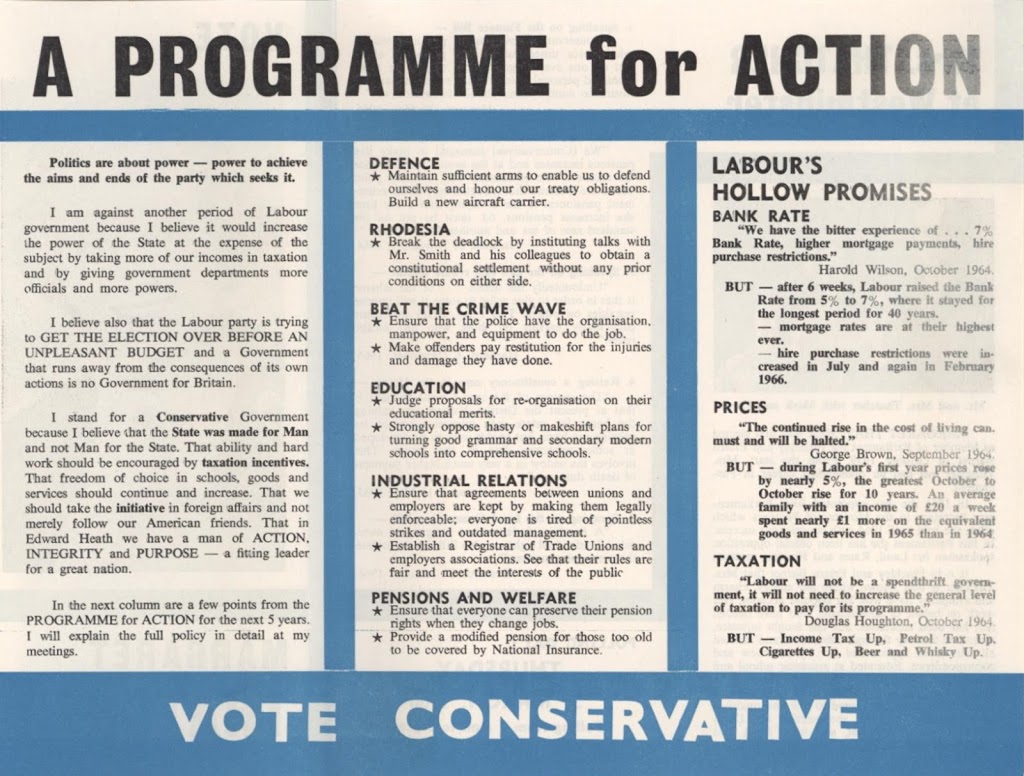 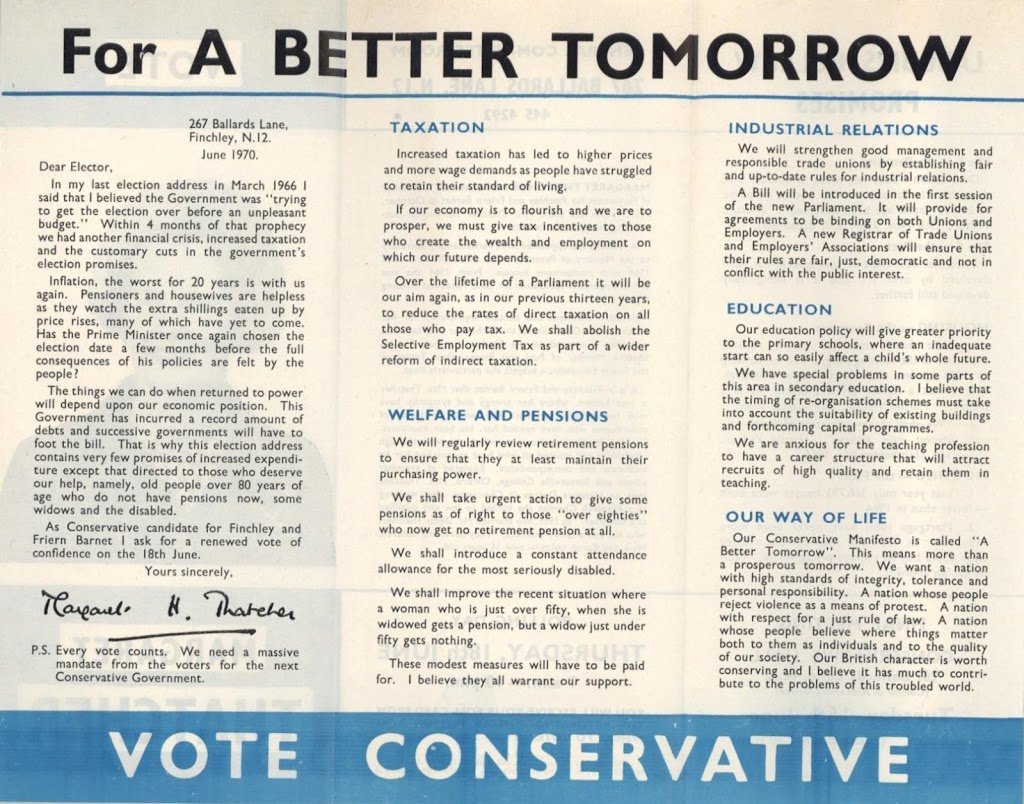 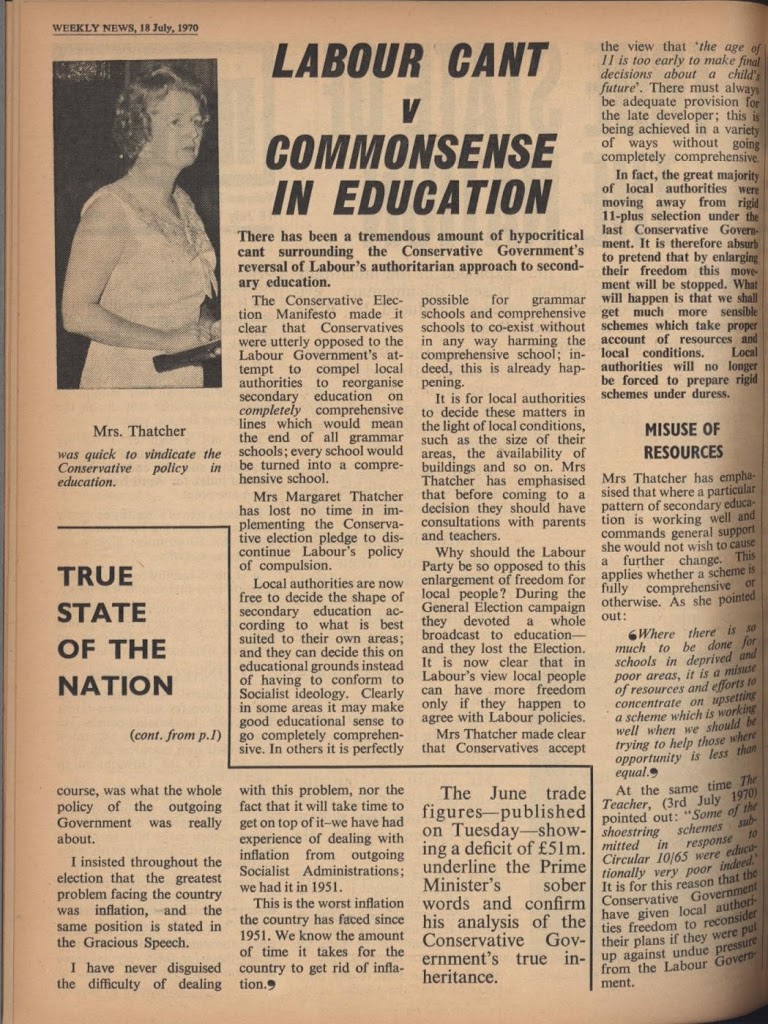 Profile of Margaret Thatcher MP, the new Secretary of State for Education and Science, July 1970 As published in the Party newsletter, Weekly News (11th July 1970; Vol. 26, No. 22) 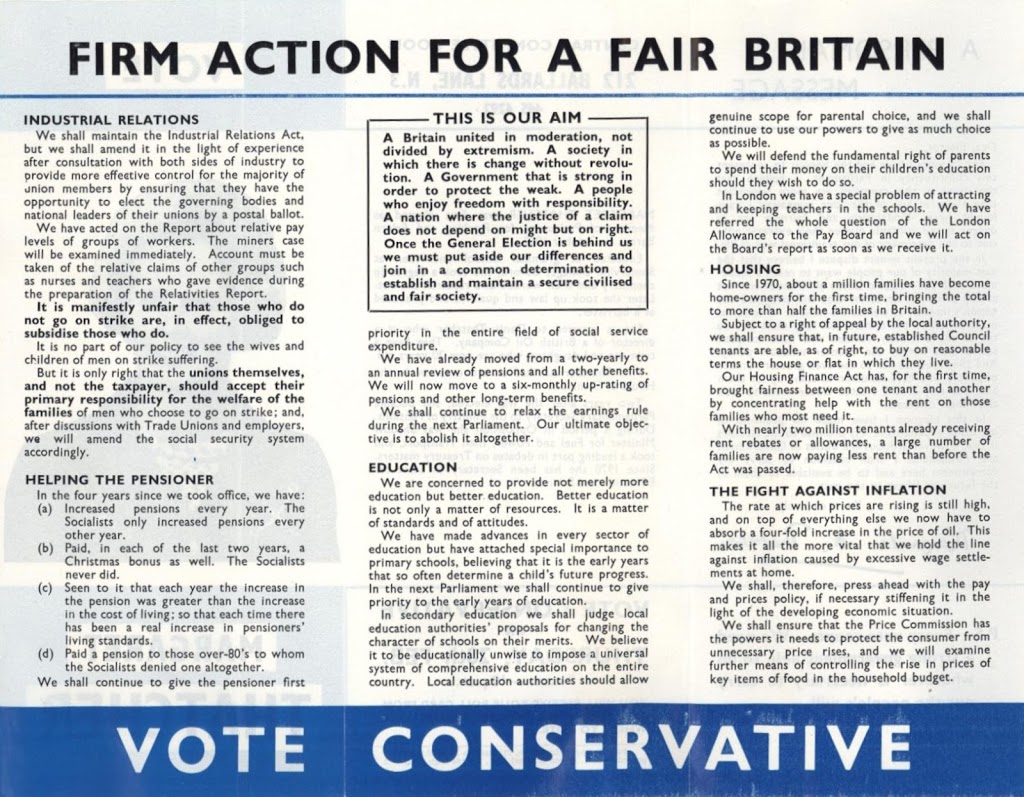 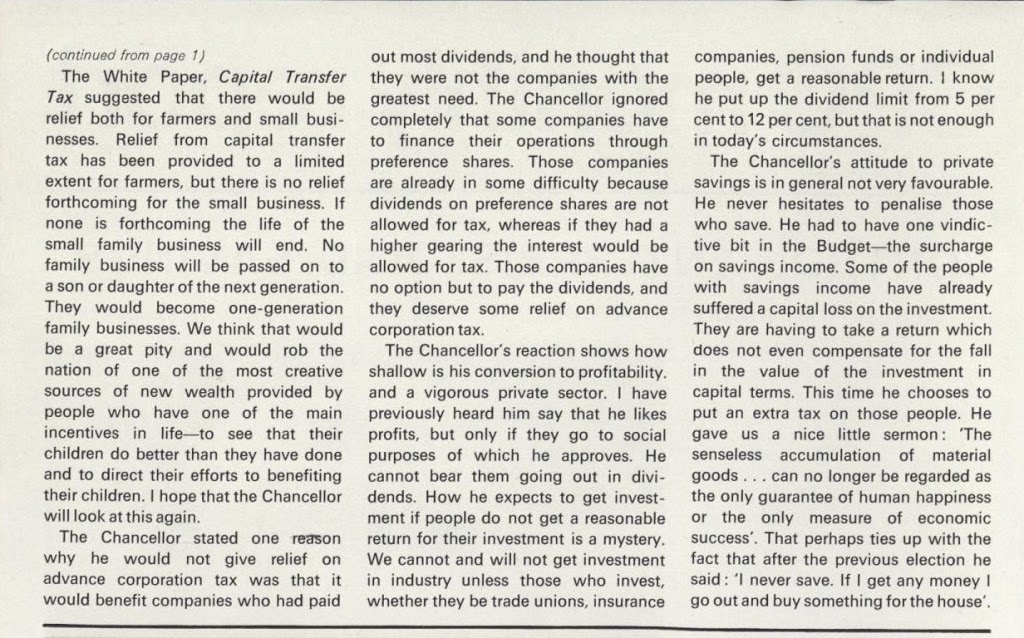 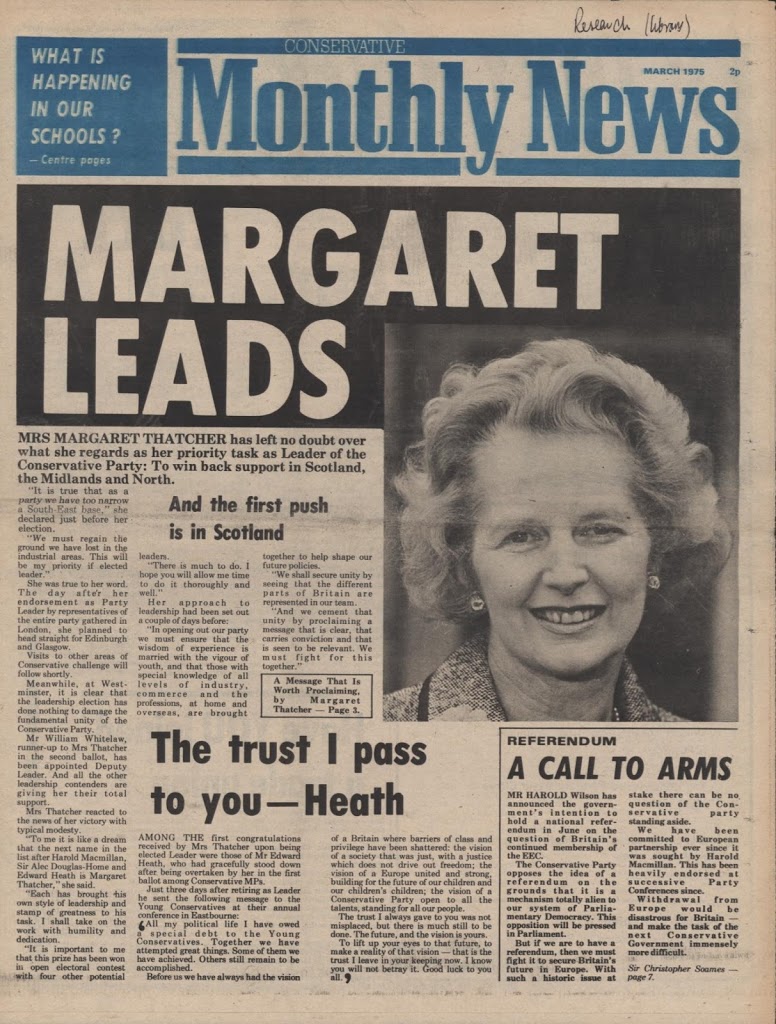 Lead article in Conservative Monthly News covering Thatcher’s replacement of Heath as Leader of the Conservative Party: ‘There is much to do. I hope you will allow me time to do it thoroughly and well.’ 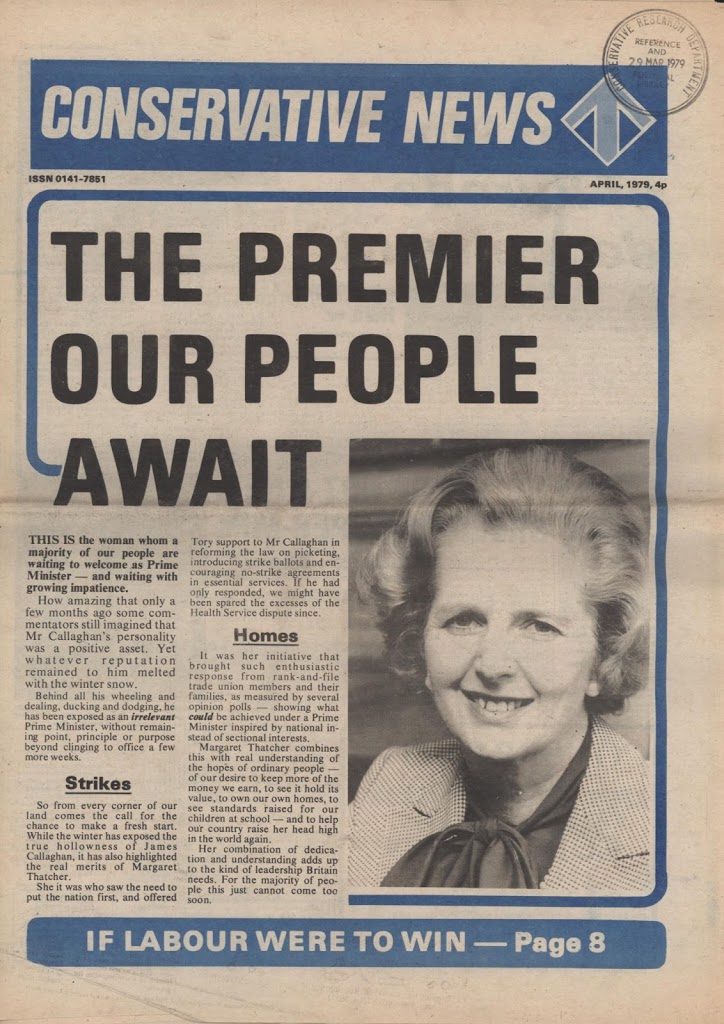 Article in Conservative News on the eve of the 1979 General Election: Margaret Thatcher understands ‘the hopes of ordinary people – of our desire to keep more of the money we earn, to see it hold its value, to own our own homes, to see standards raised for our children at school – and to help our country raise her head high in the world again.’