A recent visitor to the Library with an interest in Lord Nelson and maritime history gave me an excuse to bring out some naval treasures. The Bodleian may not seem the most obvious place to look for Britain’s sea heritage, but there are a number of key collections nonetheless. The foundation as always is the extraordinary manuscript collection of Richard Rawlinson, which contains amongst much else more than thirty volumes of the papers of Samuel Pepys. Though famous for his diary, his role in life was naval administration. He rose to be Chief Secretary to the Admiralty under both Charles II and James II. 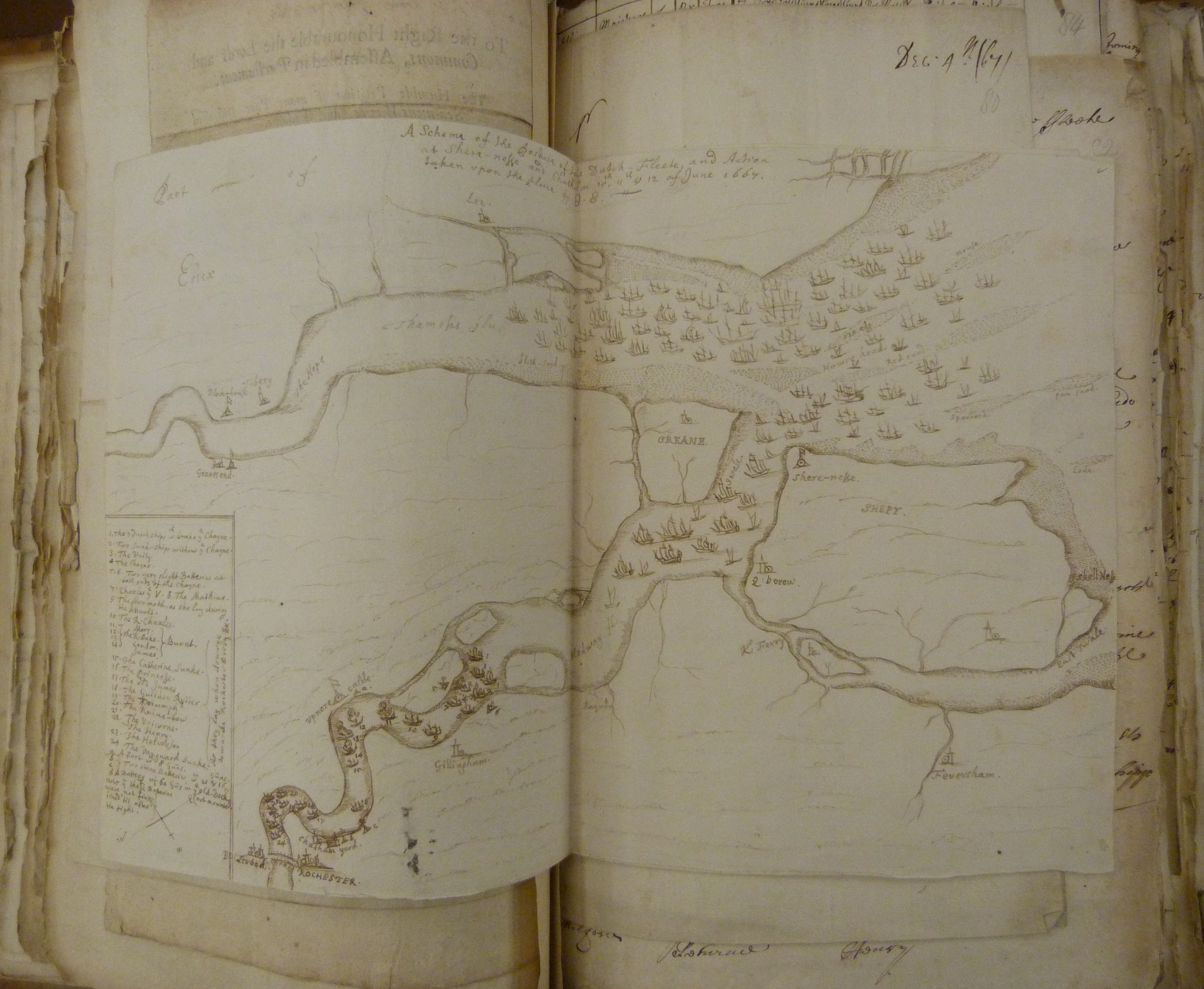 The above sketch of the infamous Dutch Raid on the Medway of June 1667, drawn by another famous 17th-century diarist John Evelyn, was sent to Pepys in January 1668. It is enclosed with a letter in which Evelyn apologises for taking so long over sending the sketch, his excuse being that he had been afflicted with a ‘griping of the gutts.’ He says that the sketch was a representation of the raid as he saw it from the ‘hill above Gillingham.’ He had taken the layout of the river from ‘an old paper lying by me, and not from any printed mapp.’

A key to the sketch explains the positions of the English ships and notes the burning of four ships in the Medway near Chatham Dockyard. The Royal Charles (10) was the flagship of the fleet, and the Dutch towed it away as a prize. It had been the Naseby, but was renamed when it brought the king back to England at the Restoration in 1660. Pepys himself was on board that day. Her stern remains in the Netherlands to this day, kept in the Rijksmuseum. 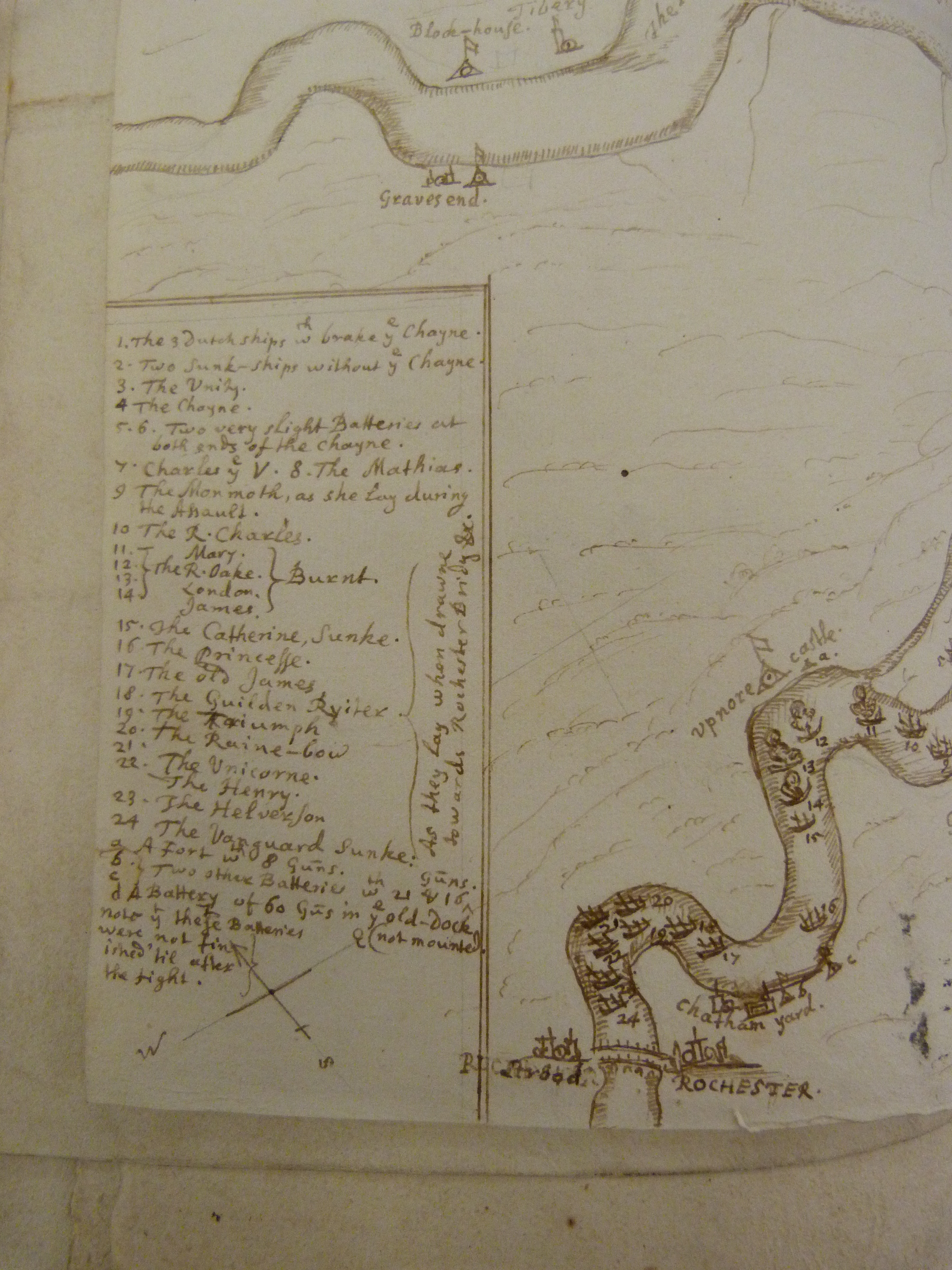 Key to Evelyn’s sketch of the Raid on the Medway, June 1667

More about the Library’s 17th-century collections, or at least those acquired before 1922, can be found in an old but still useful guidebook, A student’s guide to the manuscripts relating to English history in the seventeenth century in the Bodleian Library (1922) by Godfrey Davis, now available online at the Internet Archive.

The Bodleian continued to acquire naval and maritime papers, mainly through its modern political collections where the navy and shipping have often featured in policy, but also through accessions of family papers where there are sometimes naval connections even when the main subject is a literary or political figure. A search for the words ‘navy’ or ‘naval’ using the online search page for manuscripts returns hits on 92 collections. Among these are the papers of Pepys’s patron the Earl of Sandwich in the Carte collection (see the Carte Calendar); secret service papers of Sir Evan Nepean who was Secretary to the Admiralty from 1795 to 1804, catalogued among single items of historical papers; papers of the naval surgeon John Harness (?1755-1818) who became embroiled in a bitter dispute about lemons; papers of the Mary Somerville, which include correspondence of her father Admiral William George Fairfax (1739-1813); and papers of William Waldegrave Palmer, 2nd Earl of Selborne, First Lord of the Admiralty 1900-1905.

Of course, Bodley was a son of an Exeter merchant, and his marriage to Ann Ball, widow of a Totnes merchant, is supposed to have given him access to her money derived from the pilchard trade. So the Library could be said to be built on England’s seafaring endeavours.