In July 1914 there was no certainty that Britain would become entangled in the ‘Austro-Servian War’ which emerged from the assassination of Archduke Franz Ferdinand on 28 June. The Liberal government in London was deeply divided over Britain’s possible role in a European conflict. A major new source for the deliberations that took place in H.H. Asquith’s Cabinet in the Summer of 1914 is Lewis Harcourt’s political journal. Harcourt, who was Colonial Secretary, sat next to Asquith at the Cabinet table. He maintained a record of proceedings despite being warned more than once by his colleagues not to do so. No official Cabinet diary was kept until David Lloyd George began the practice in December 1916. 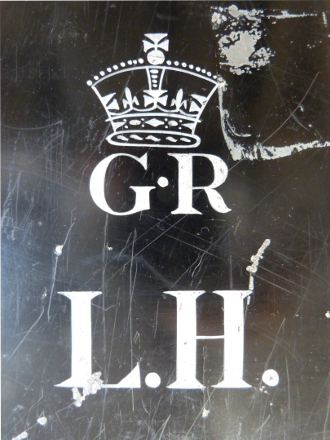 Monogram on Lewis Harcourt’s ministerial trunk in which his political journal was housed before it was acquired by the Bodleian Library.

To mark the centenary of British intervention in the First World War on 4 August 1914, we shall be posting entries from Harcourt’s journal on the Oxford World War I Centenary blog from 26 July to 4 August. The journal traces the slide into war, and captures the changing opinions of individuals and groupings of ministers both for and against intervention.

Harcourt’s journal features in the Bodleian Libraries exhibition The Great War: Personal Stories from Downing Street to the Trenches.