The current Bodleian exhibition, Marks of Genius, asks us to consider the meaning and context of the concept of genius. In this 200th anniversary year of the battle of Waterloo, it seems appropriate to kill two birds with one blog, and consider a contemporary attitude to Napoleon whom many, even his opponents, regarded as a genius. 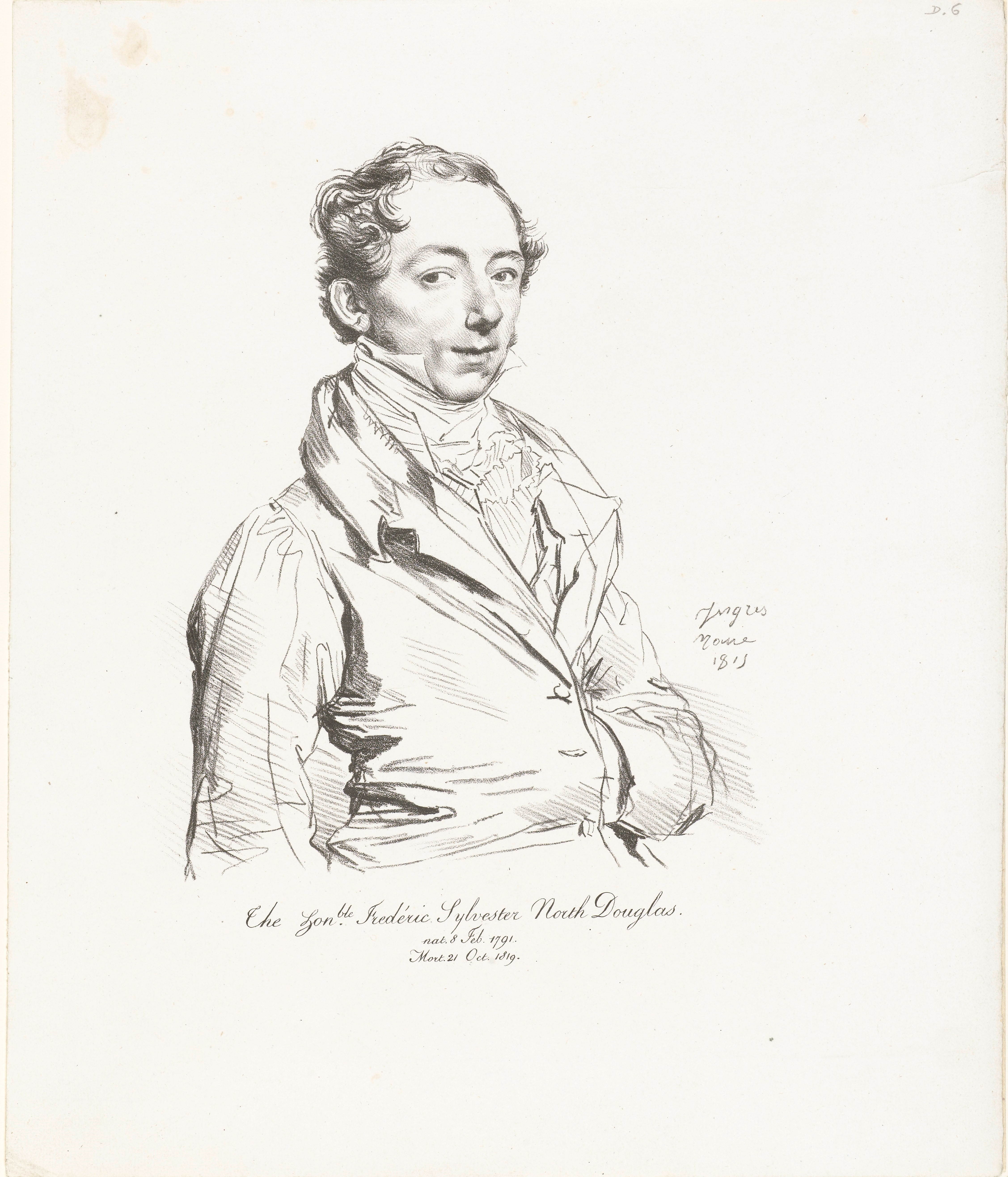 Frederick Sylvester North Douglas (1791-1819), MP for Banbury, classical scholar and admirer of Byron, was on the Grand Tour from 1814 to 1816. This necessary part of the education of a gentleman had been denied to Britons during the almost continuous wars with France from 1793 to 1814. But now, with Napoleon defeated and exiled to the tiny island of Elba, the once invincible Emperor himself had become part of the tour. There are at least three accounts of visits to him on Elba in the manuscript collections of the Bodleian Libraries. 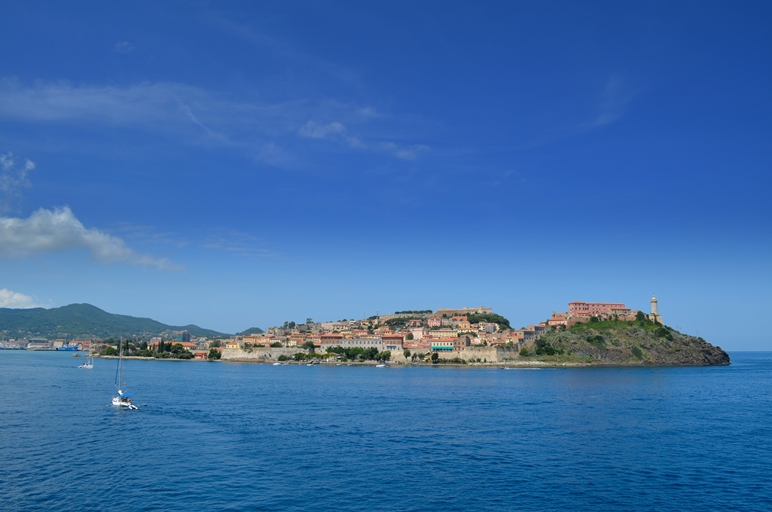 In November 1814 Frederick Douglas was in the north of Italy, and resolved to arrange a visit to Bonaparte to see for himself what the conqueror of much of Europe was really like. He booked himself a passage with Captain Adye on HMS Partridge, a small warship which plied between Elba and the mainland and patrolled the Elba station. Douglas wrote in his journal [MS. Eng. misc. c. 815] on Monday 14 November:

When we awoke after a very quiet night we found ourselves entering Porto Ferraio one of the safest as well as most beautiful in the Mediterranean.… The town itself tho very steep is prettily situated in an amphitheatre upon the port. … The house in which Napoleon has fixed his residence is in the upper part of the town with a fine view of the sea & of every vessel that goes out or in. It is in itself a very simple & I should suppose a small house with nothing to mark the imperial residence.

The British agent informed Douglas that the best way to meet Napoleon was to stand at the Porta di Terra, and sure enough, after they had waited some time, Napoleon ‘appeared in a barouche drawn by four indifferent grey horses & two green postillions.’ Douglas believed he might be able to spot a genius from his outward appearance:

All was extremely simple if not shabby but he was followed by four or five officers & two Polish lancers upon wretched post hacks who were joined by two miserable looking Mamalukes one a black & the other a French man. He was sitting with his hat on but accompanied by an aide de camp who remained all the time uncovered. When Buonaparte saw us he moved his hat & made a bow which Captain Adye thought formal. Buonaparte is not so fat as I expected. He is short & full in the face with a remarkably healthy look. At the same time we saw him he was sulky but his eye was full & clear & there was look [sic] of great sense & intelligence more than of remarkable genius in his countenance. I might I think pass him in the street without looking round. None of the persons I have heard considered as like him are like him at all, Alfred Harris, Lord Wellesley etc, & none of the prints. But the best is that which has the inscription, Adieu Malmaison, particularly in manner. His complexion is brown, but he looks younger than his age. However growing fat must have altered him extremely.

Alfred Harris would appear to be Revd the hon. [Thomas] Alfred Harris (son of James Harris 1st earl of Malmesbury) who, like Douglas, was an alumnus of Christ Church, Oxford. 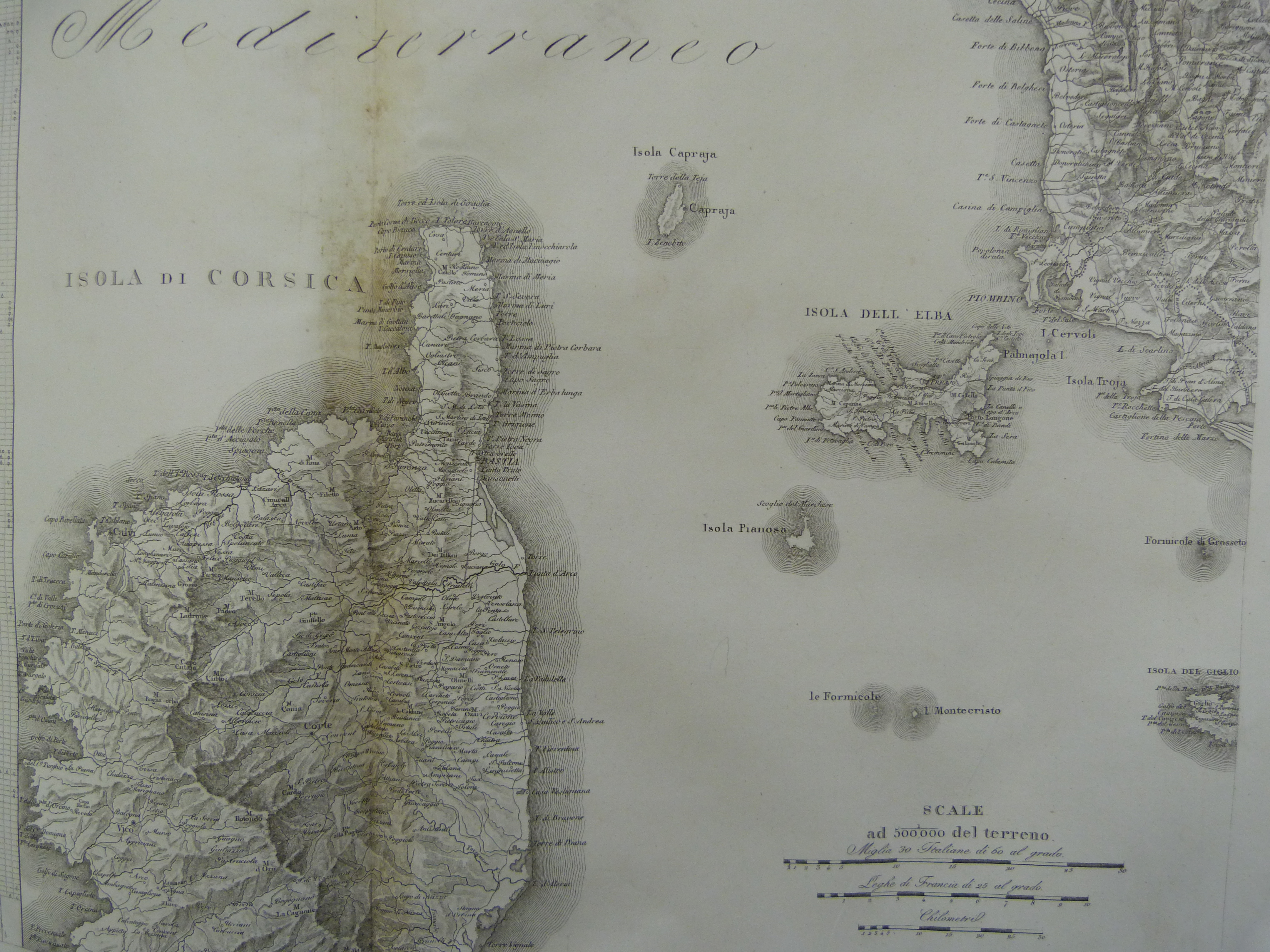 Corsica and Elba, from the Carta Amministrativa del Regno D’Italia (1806). The Kingdom of Italy was created by Napoleon in 1805, with himself as its first king.

Later, Douglas commented on Napoleon’s villa, and was filled with

surprize admiration & compassion to see the simplicity of his tastes … . His retirement & his amusements are certainly those of a great man & an hero.

There followed an incident with an officious member of Napoleon’s staff who wished to clear the crowds away from Napoleon’s residence and threatened to use the Polish lancers to do it. Douglas’s military companions took offence, and acting as interpreter Douglas was asked to find out the officer’s name which he eventually gave reluctantly and rudely as ‘Roule’. This must be the Major Roule who had a reputation for officiousness and is mentioned in The journal of Sir Neil Campbell, published as Napoleon at Fontainebleau and Elba (London, 1869).

On the next day an opportunity to visit Napoleon was missed, but

we again saw Buonaparte who was going out in his carriage & who bowed to us with much more civility & with a smile which had something very gracious & attractive in it. His countenance continues to give me what is the idea I had formed of his character, more that of great sense than of genius, of calculation than of greatness. I see no marks of want of amiability in his features but much the look & manner of a gentleman.

At last, on Wednesday 16 November Douglas was granted an interview with the great man. He immediately wrote up what he could remember of his conversation in a breathless stream of unpunctuated text, interrupting his usual journal ‘in order to put down Buonaparte’s conversation fresh as it came to my recollection’. 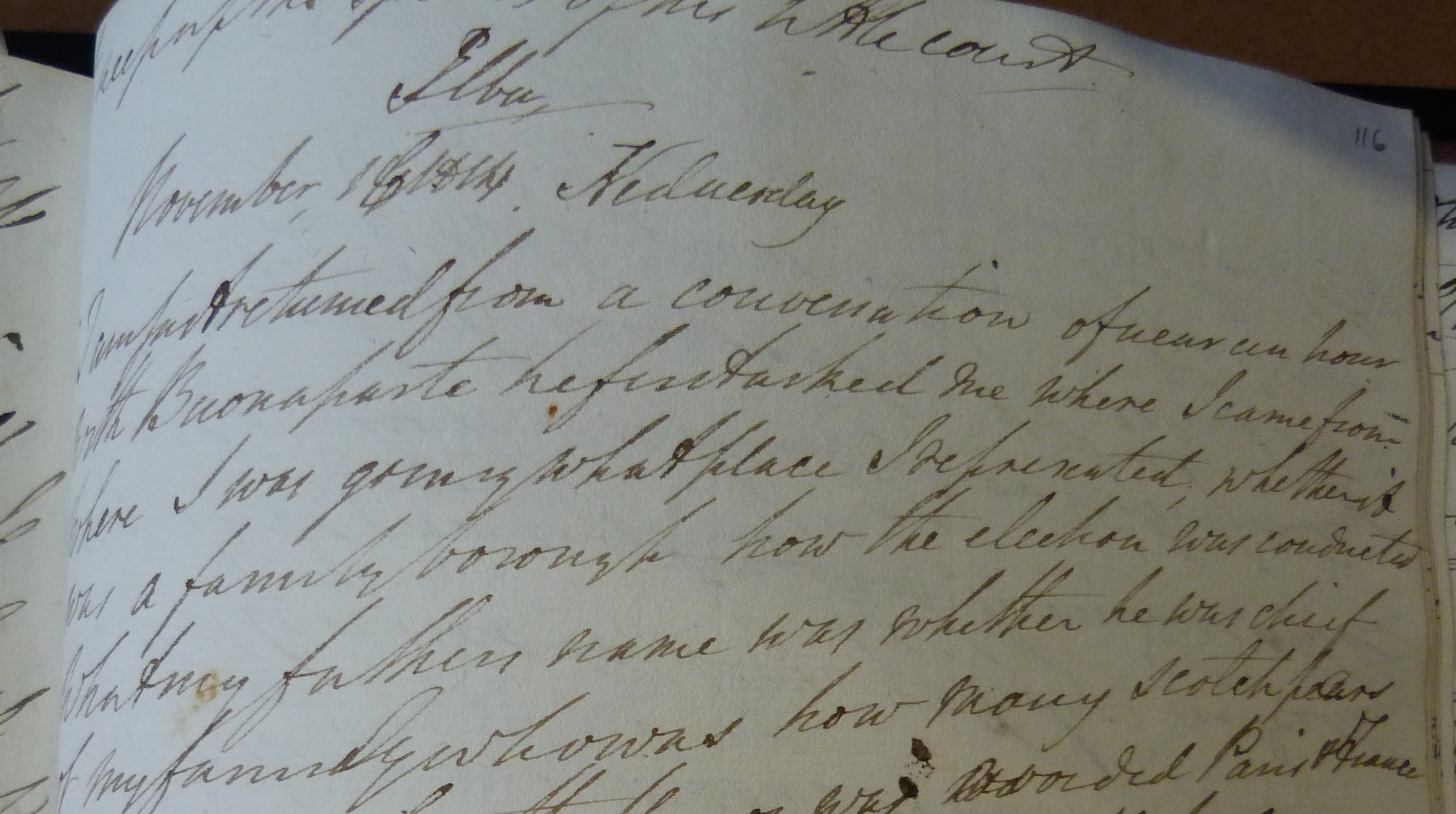 I am just returned from a conversation of near an hour with Buonaparte. He first asked me where I came from, where I was going, what place I represented, whether it was a family borough, how the election was conducted, what my father’s name was, whether he was chief of my family, who was, how many Scotch peers there were … . He talked of Milan, asked whether the Milanese were not tired of the Austrians … . Asked who were the principal people in the Ministry & opposition, but seemed to know very little about them. Asked what had become of Lord Sidmouth, whether Grey & Holland were not the head of the Opposition & Burdett. Asked a great deal about our seigniorial rights & did not know they had been all abolished. Wished to know when territorial slavery was abolished & seemed surprized to find it so early. Talked about the Puritans whom he seemed to confound with the Presbyterians. His voice is disagreable & his manner of speaking thick & unintelligible. His manner was however agreable & his look expressed the utmost kindness & civility. He asked the name of our chief families in Scotland & England, wanted to know whether there were not some boroughs in which there was no election – how many nobles, by which he meant landholders, in the house of Commons, how many connexions of the house of peers, talked much about Ireland, & said they had very absurd tenets as Catholics, seemed to wish to change the subject when I had changed it to his wife. Talked much about our way of marrying. Tried to find out [if] we were discontented in Scotland, asked about the dress, knew the 42nd & 94th. … He asked a great deal about Oxford, Cambridge & Edinburgh but seemed perfectly ignorant of everything about either [sic].

Douglas was the son of the Scottish peer and politician, Sylvester Douglas, baron Glenbervie (1743-1823),  which explains the Scottish interest. The 42nd and 94th were Scottish regiments. The former, the famous ‘Black Watch’, had fought throughout the Peninsular War, and faced Napoleon again only seven months after this interview. In February 1815 Napoleon made his escape from Elba and began the ‘Hundred Days’ that culminated at Waterloo on 18 June.

Douglas was only twenty-three years of age in 1814, but Napoleon thought he was much older:

He said I was not forty yet? He said vous buvez beaucoup [do you drink a lot]? I answered, thinking he meant the Scotch, oui mais pas qu’ autre fois. Le taxe sur le vin l’empeche mais ici vous pouvez boire sans taxe [yes, but not as much as in former times. The tax on wine prevents it, but here you can drink without tax]; when I found he meant me.

An interesting perspective on the interview with Napoleon is provided in a letter from Lady Mackintosh to John Whishaw, 22 December 1814, published in The “Pope” of Holland House: Selections from the correspondence of John Whishaw and his friends 1813-1840 (London, 1906).