Mabel FitzGerald today is best known for her work on the physiology of breathing, specifically for her ‘Observations on the changes in the breathing and the blood at various high altitudes’, published in 1913 and 1914. But her research interests were much broader: she researched and published on bacteriology, including ‘The induction of sporulation in the bacilli belonging to the Aerogenes capsulatus group’ (1911), and combined anatomy and physiology in her work on ‘Origin of the Hydrochloric Acid in the Gastric Tubules’ (1910). Previously, she had worked with Gustav Mann in Oxford on histology, contributing to his publication on tissue response at vaccination sites (1899), and collaborated with Georges Dreyer at the Copenhagen State Serum Institute on finding methods to differentiate between B. typhosus and B. coli in bacteria cultures (1902). 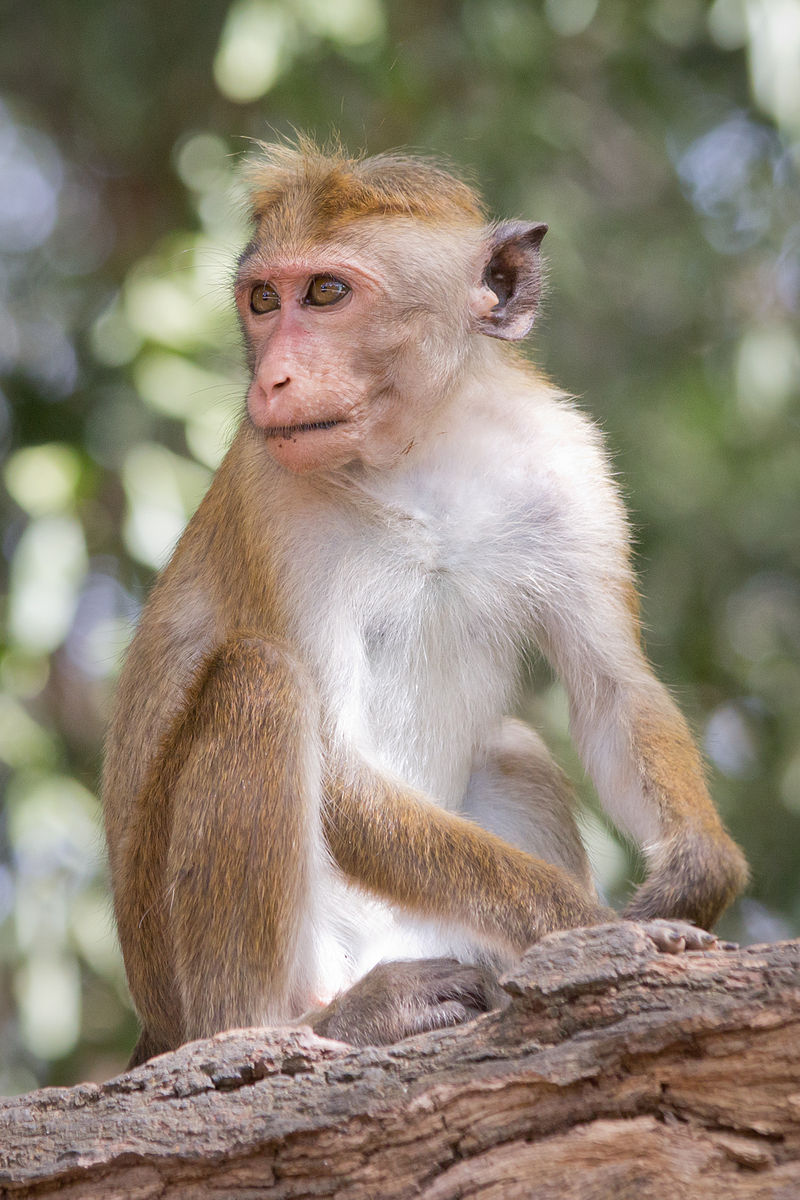 Her own first big research project, however, took her into the world of what today would be called neurophysiology. From 1899, FitzGerald investigated the interrelationship of the grey matter (cell bodies) and white matter (nerve fibres) in the spinal cord of the Macaque monkey. She made hundreds of detailed to-scale drawings of cross-sections of the monkey spinal cord as seen under the microscope, and meticulously measured and compared the size and distribution of grey and white matter areas.

Gustav Mann, under whom FitzGerald was working at the Oxford Physiology Department, later wrote in testimonial for her: “I was so much struck by her great thoroughness  that I proposed to her the difficult task of investigating the inter-relationship of the grey and the white matter of the spinal cord of the monkey. In this research she has been engaged for five years. She spent the first three years with work having reference to the minute structure of the grey matter and made a large series of accurate microscopical drawings. The last two years she has devoted to the special investigation of the relative and absolute increase and decrease of the different tracts and of the grey matter.”

The results of FitzGerald’s research were communicated to the Royal Society by FitzGerald’s mentor – and Professor of Physiology – Francis Gotch (women were not admitted to the society at that time), but later published under her own name as ‘An Investigation into the Structure of the Lumbo-sacral-coccygeal Cord of the Macaque Monkey (Macacus sinicus)’ (1906).

The original drawings, along with extensive notes and drafts for the publication, survive as part of the FitzGerald’s archive. The material not only documents the results of FitzGerald’s work but provides an insight into very early 20th-century research methods and lab processes. 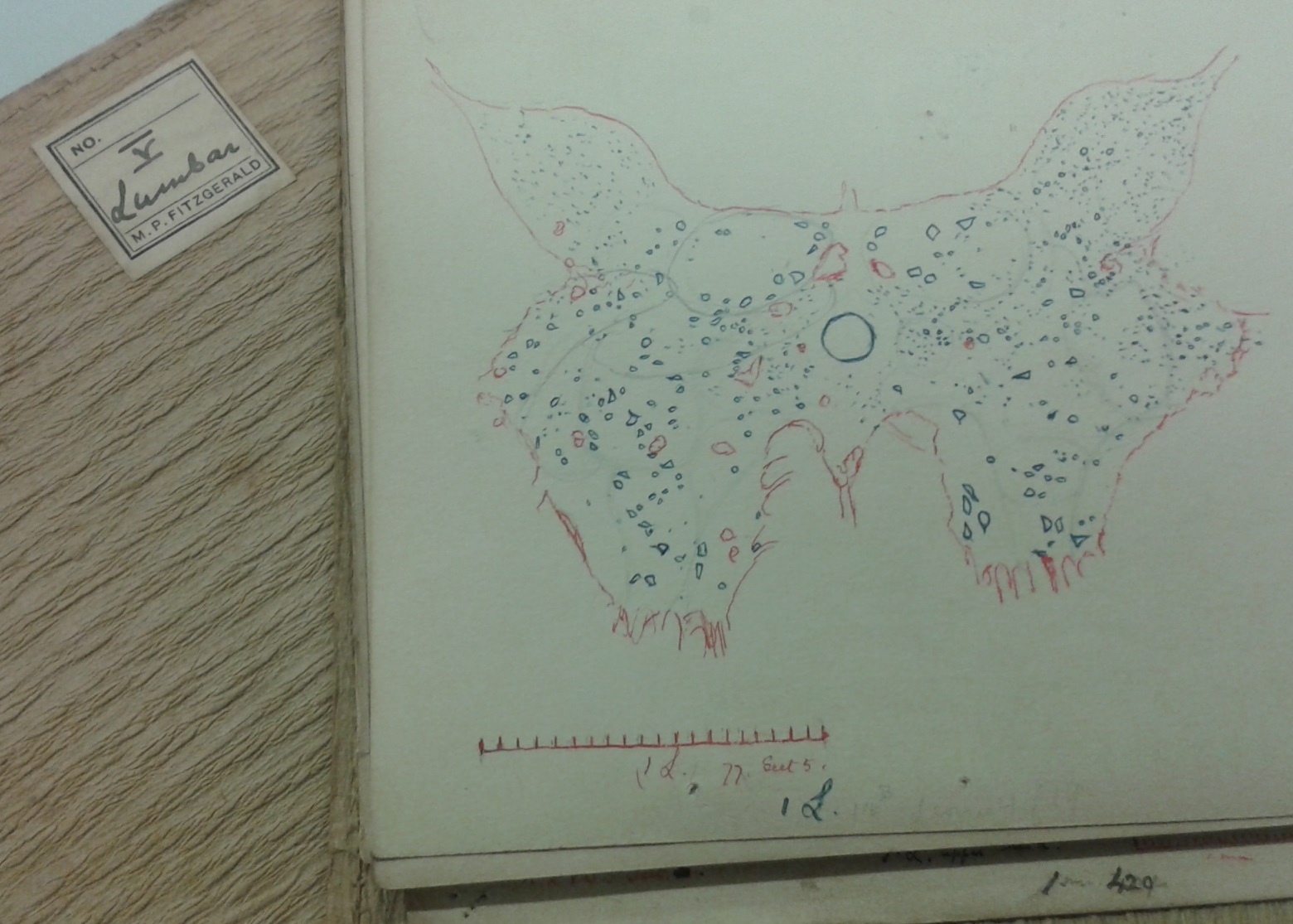 Cross-section of the Macaque monkey spinal cord in notebook, as drawn by Mabel FitzGerald

These papers, after decades of use, are now in a bit of a mess, and some of the boxes in the archive, labelled ‘Miscellaneous’ or ‘unidentified notes’, have never been sorted since they left Mabel FitzGerald’s house in the 1970s.

For an archivist, more likely to be trained in history than histology, such ‘messy’ but highly specialist papers pose quite a challenge: how to correctly sort, and meaningfully describe in a catalogue, material one has little subject knowledge about? 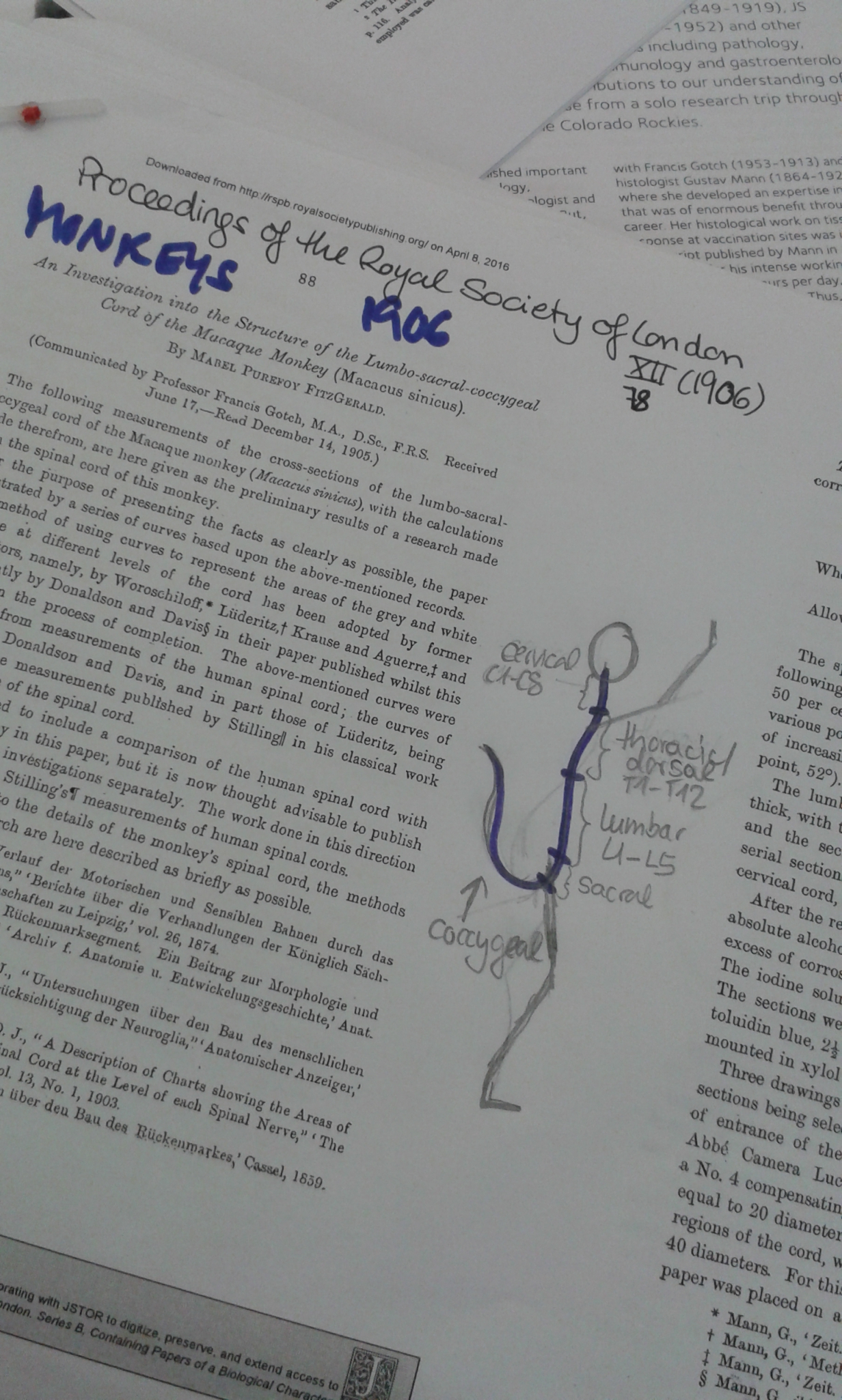 Monkey anatomy for beginners/archivists. Notes and drawing in archivist’s hand (in case you wondered – ‘coccygeal’ is the tail bit!).

In case of the monkey papers, the first step was comparing the unsorted notes with the content and structure of the published article, mostly to identify which of the miscellaneous material might be related to Macaque spinal cord research at all. Luckily, there are some quite distinctive technical terms in this field – for example ‘lumbo-sacral-coccygeal’ is very unlikely to appear in papers relating any of FitzGerald’s other research projects.  Reading the article also helped to pick up more clues of what to look for in the drafts and notes.

And whilst archivists tend to be ungifted when it comes to drawing matchstick monkeys, they know that context within, and of, a collection is everything – and that the meaning of a piece can often be deduced from related material.  Think of a jigsaw puzzle. Which papers belong together (same date, similar wording, same type of paper or writing material…) and how could this all fit together (numbered pages, sentences continued, numbers translated into graphs…)?

These kind of professional skills and talents, along with easily available information resources (Google and Wikipedia are good starting points) and a good measure of persistence, get us quite far in the sorting and cataloguing process. But sometimes, and certainly this is the case for some of the more ‘obscure’ notes and monkey research data, it just needs an expert to correctly identify and interpret content and structure. 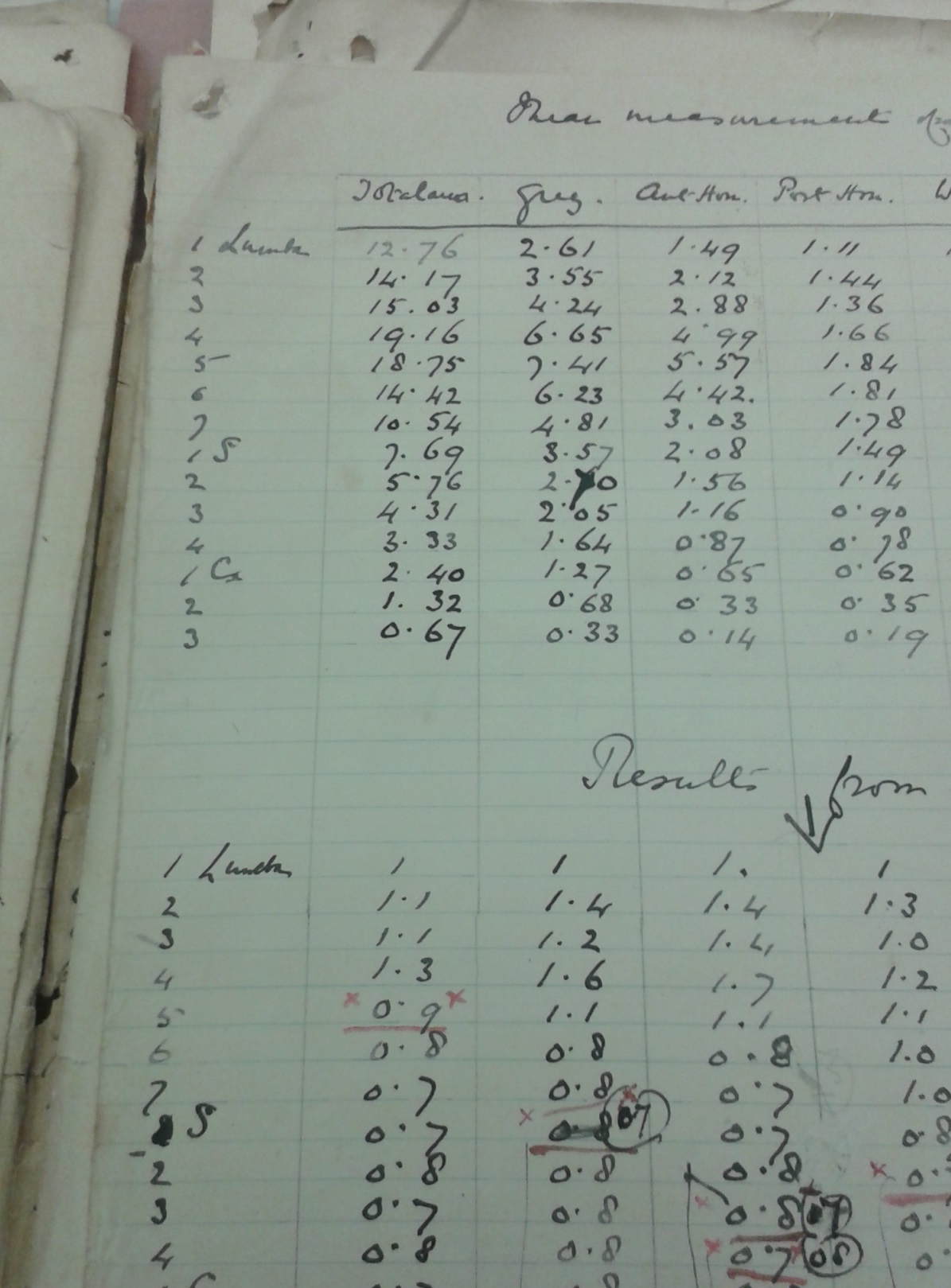 Fortunately, working at the Bodleian Library and within the University of Oxford means that for literally any subject – including the Macaque monkey lumbo-sacral-coccygeal cord – chances are good that there is not only some specialist but a world-wide leading expert less than 15 minutes away.

In this case, a contact within the Oxford University Department of Physiology, Anatomy and Genetics led to professor emeritus Ray Guillery, who during his long and distinguished career as a physiologist and neuroanatomist, had worked on the monkey spinal cord. After a first visit to the Weston Library archives processing room he kindly agreed to help us  identify and sort Mabel FitzGerald’s drawings, drafts and notes, so these can then be accurately catalogued.

Which leads us to: Ringworm, yet another research interest of Mabel FitzGerald’s.
When investigating ‘Three cases of the ringworm of the calf transmitted to man’ in 1906, FitzGerald not only made notes on the clinical condition and treatment of the patients at the Oxford Radcliffe Infirmary, but took photographs of the tinea corporis cultures obtained from the patients’  skin swabs. Many of these are unidentified, or need to be linked to notes and patient data.

So, if YOU are an expert on fungal infections of the skin, and interested in helping us for a day or so at the Weston Library: please do get in touch! 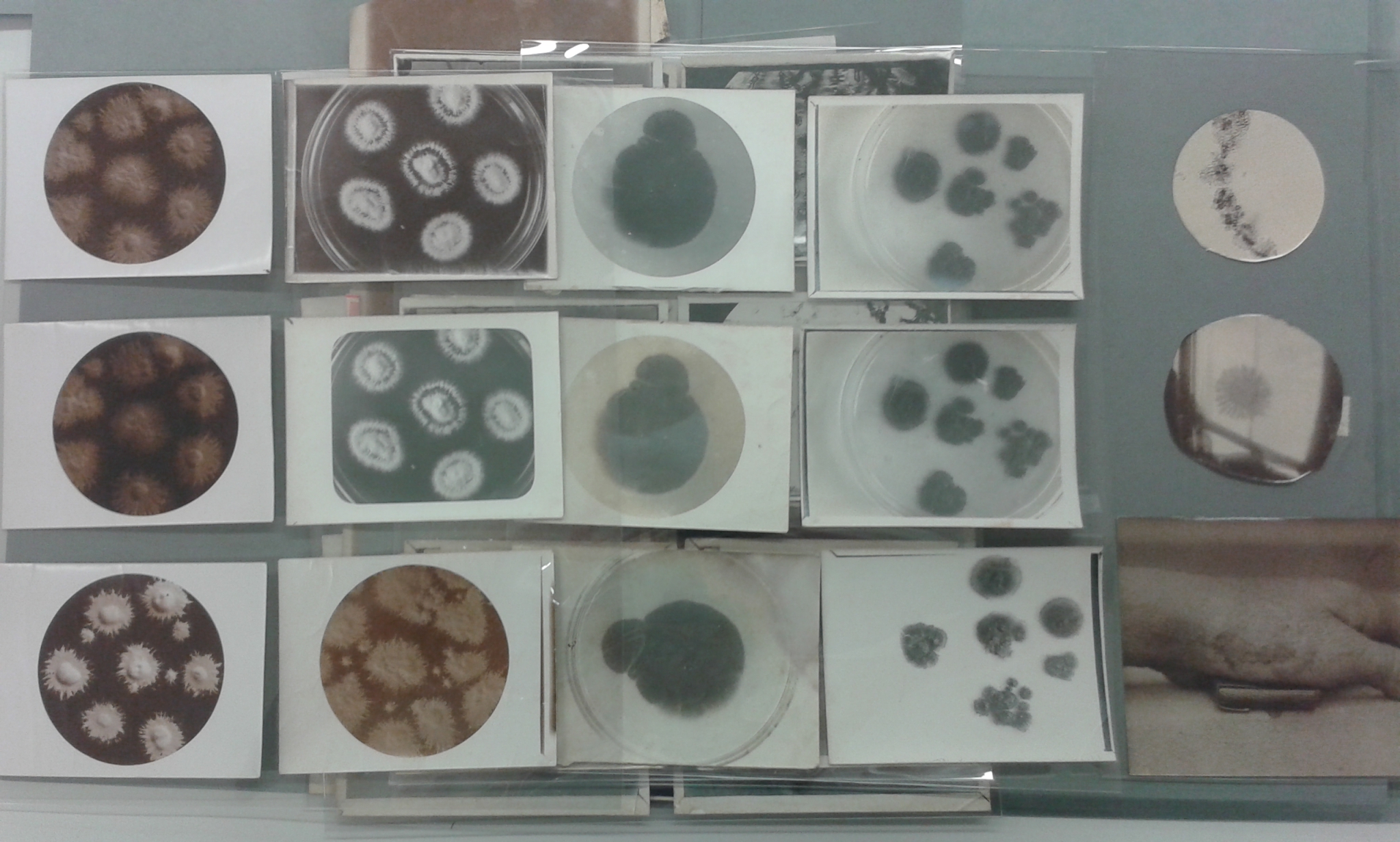