Mabel FitzGerald is best remembered for her scientific work, particularly that related to the effects on human physiology of living at altitude. The collection of her papers currently being processed by the Bodleian certainly reflects her scientific leanings including as it does examples of her research notes and correspondence with the great and the good with whom she worked closely in the scientific arena. However, we are also lucky enough also to have interesting correspondence with other notable individuals of the time, including from the author Victoria Cross, and her uncle, Heneage Griffin.

Little is known about the private life of Victoria Cross (1868-1952). Even her name is rather a mystery with references to her variously as Vivien or Vivian Cory Griffin, V. C. Griffin and Victoria Crosse, with the pseudonym Victoria Cross being adopted for her published works. Born Annie Sophie Cory in India to Colonel Arthur Cory and Fanny Elizabeth Griffin she was one of three daughters all of whom had literary proclivities with ‘Violet’ Adela Florence Nicholas, née Cory publishing poetry under her own pseudonym of Laurence Hope. Victoria Cross’s own prolific literary output was considered at the time to be rather racy in its exploration of female sexuality – including what were sexual taboos at the time like interracial and extramarital sex, the birth of children out of wedlock, and so on, all set against an exotic colonial backdrop. She was the woman whose books were read ‘behind closed doors’. Her notoriety was such that her books were referenced in other works of fiction without need for explanation and in her heyday they were a commercial success and translated into various languages. However, her popularity declined in the 1920s and 1930s (as did her output) perhaps as a consequence of the changing tastes and sensibilities of her readers.

For much of her adult life Vivien (as she appears in the collection) led a peripatetic life travelling extensively with her mother’s younger brother, Heneage Griffin, who was clearly a significant figure in her adult life, particularly after the death of her father (1903), her brother-in-law (1904), the suicide a few months later of his widow, her sister Adela (1904) and the death of own her mother (1916). Heneage Griffin (1848-1939) was a wealthy entrepreneur who, having made his fortune from silver mines and land ownership in the United States, retired to a life of travel.

The Mabel FitzGerald papers held at the Bodleian include (so far) around sixty letters from Heneage Griffin between 1899 and 1937 (with some undated items) and some five postcards and a letter from Vivien written after her uncle’s death between 1940 and 1941. It isn’t certain when or under what circumstances Mabel or her family first became acquainted with either of them but perhaps coming from a well-heeled British family resulted in Mabel being introduced via some mutual friendships. What is clear is that Mabel made no bones about seeking to take advantage of her friendship in order to benefit the progress of own her scientific work. In advance of the famous Pikes Peak expedition of which she was a part Mabel had evidently been in touch to ask for help in gaining useful introductions in Colorado. Although he felt he could offer limited help having left the area so long before, Heneage did write to a Mr. Young of the Hibernia Bank and Trust Co. in Denver asking that he provide her with assistance in accessing high altitude residents “as respiration at high altitudes is one of the points under consideration” and also whether he might know of people who could offer facilities to members of the expedition. 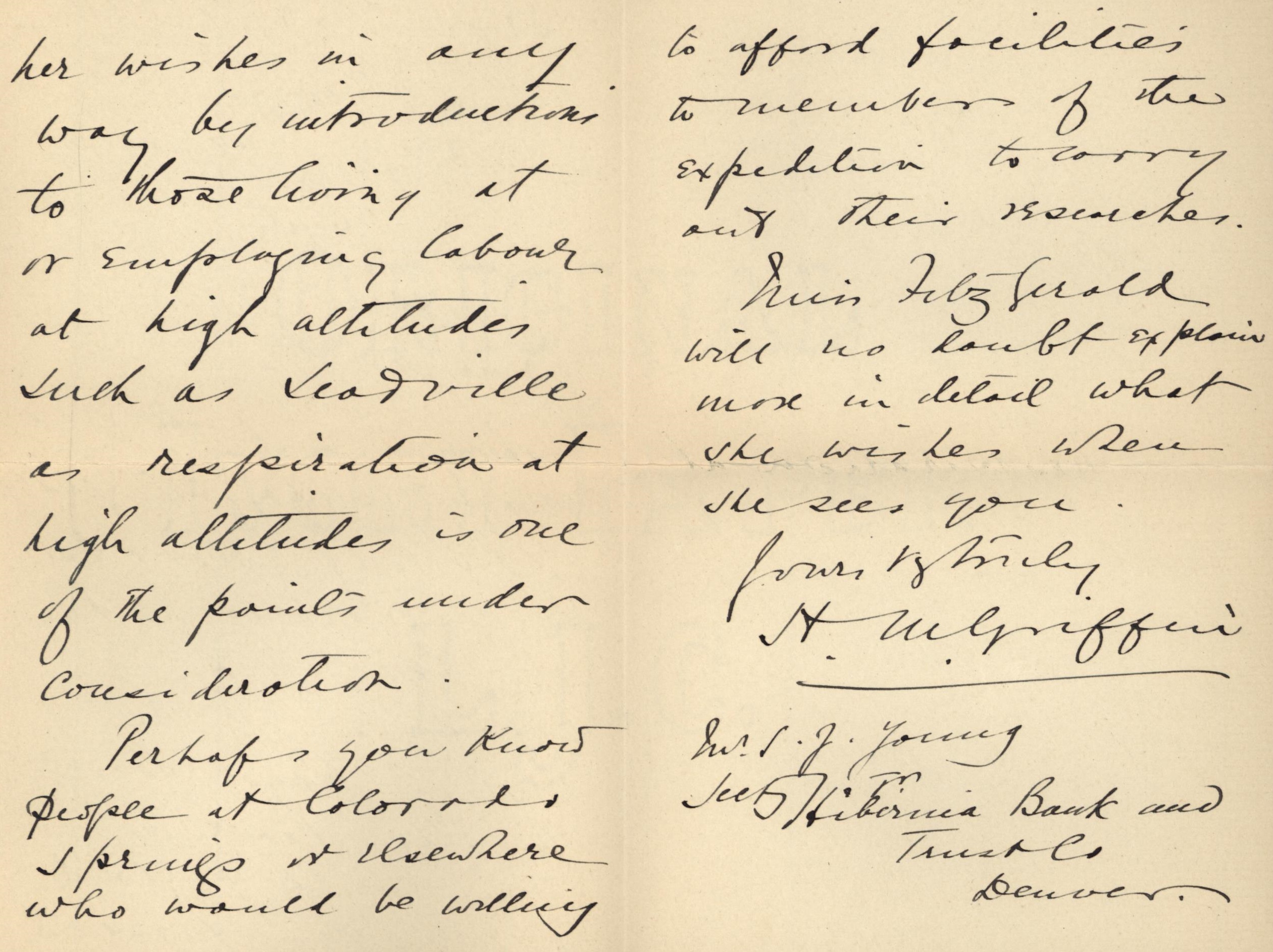 Researchers interested in Victoria Cross will no doubt wish to delve into the papers of Heneage Griffin in order to mine them for information about his rather elusive, some might say reclusive, niece. As early as 1902 he writes to Mabel telling how she and her mother were with him in Egypt and it is clear from his correspondence that they accompanied him on subsequent travels. Indeed, they had met with his sick brother-in-law in Viareggio having travelled from Constantinople so that Vivien and her mother might care for him before sending him to London for treatment where, sadly, he died. He remarks that

It has been a great strain upon my sister and her daughters but a solace to feel that one of my other sisters was with him in London, and another of his daughters.

Writing in the immediate aftermath of the suicide of Vivien’s sister, Adela, shortly after the death of her older husband, Heneage reports how General Sir Norman Stewart who had been in command when both she and her husband had died in India had said that the people there “had no knowledge of such love and such grief as that of the widow” [14 Nov 1904]. In the same letter Heneage remarks upon the close bond between Vivien and her mother which was such that “One does not know if either will survive the other” and writing on 15 Jul 1916 [Temp. box FitzGerald 4] to inform Mabel of the death of his sister, Mrs Cory, he comments that

To Vivien it is as if half her self were gone – and I doubt she will ever get over it – she and her mother were absolutely one through her life.

Little wonder then that she dedicated to her mother her 1920 volume of short stories, Daughters of Heaven. 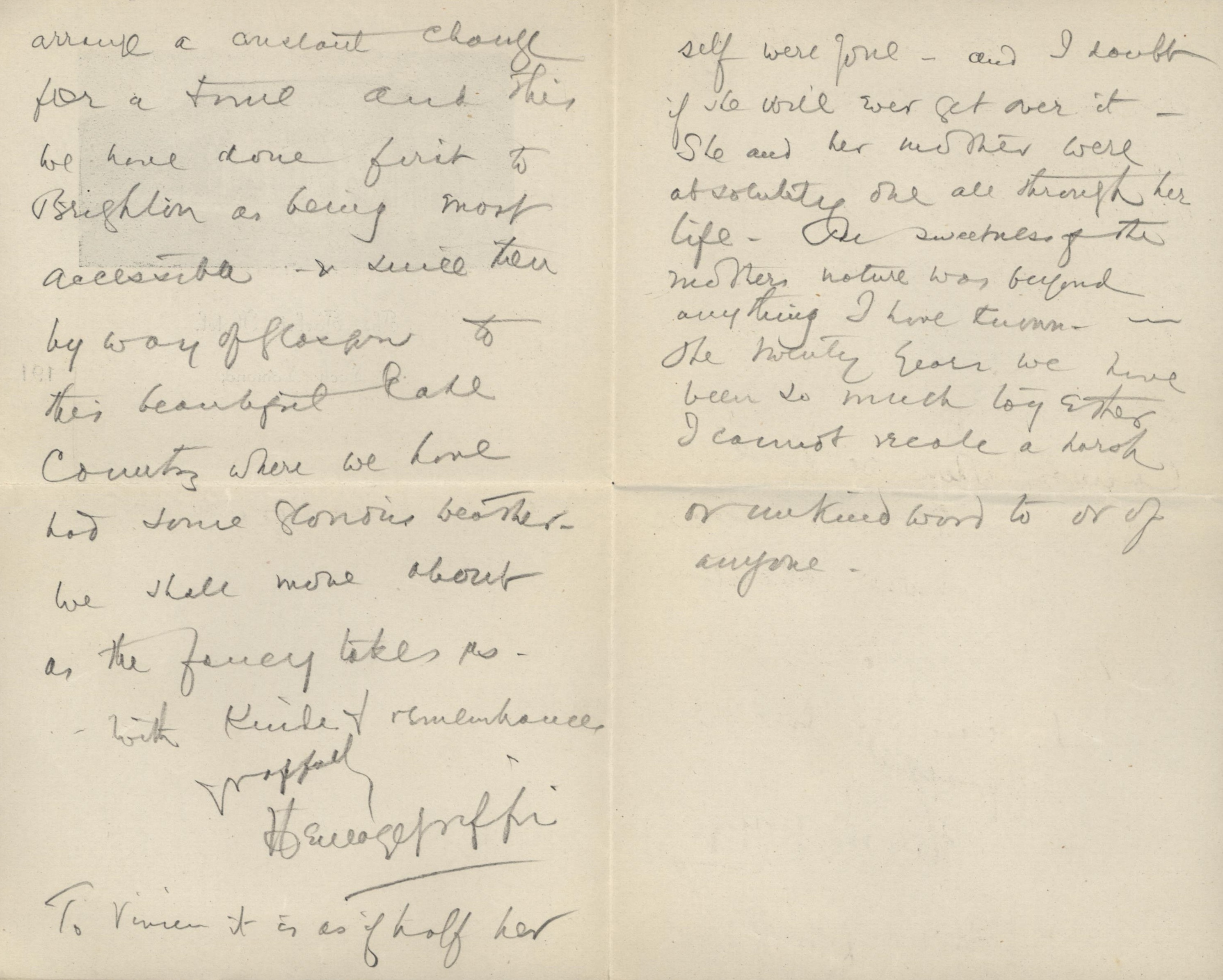 Letters from Heneage Griffin also offer titbits about Vivien’s publishing activities which he deemed “a very profitable employment for her” [13 April letter, year unknown, Temp. box FitzGerald 4] including her final submission to “high financial bribes” which allowed some of her works to be issued in a shilling format, including her best known Anna Lombard. Sadly Vivien apparently had to apply to the courts to prevent the publication of a “garbled” shilling edition of her Five Nights [27 Nov 1911 letter, Temp. box FitzGerald 4].

Vivien’s own correspondence to Mabel follows on from the death of her uncle in 1939 and predominantly concerns the perceived delay in the winding up of his estate (of which she was the major beneficiary). She speaks of her great sadness at the loss of her uncle “but I am anxious to go on living until everything is done just as he would wish if he were here”. 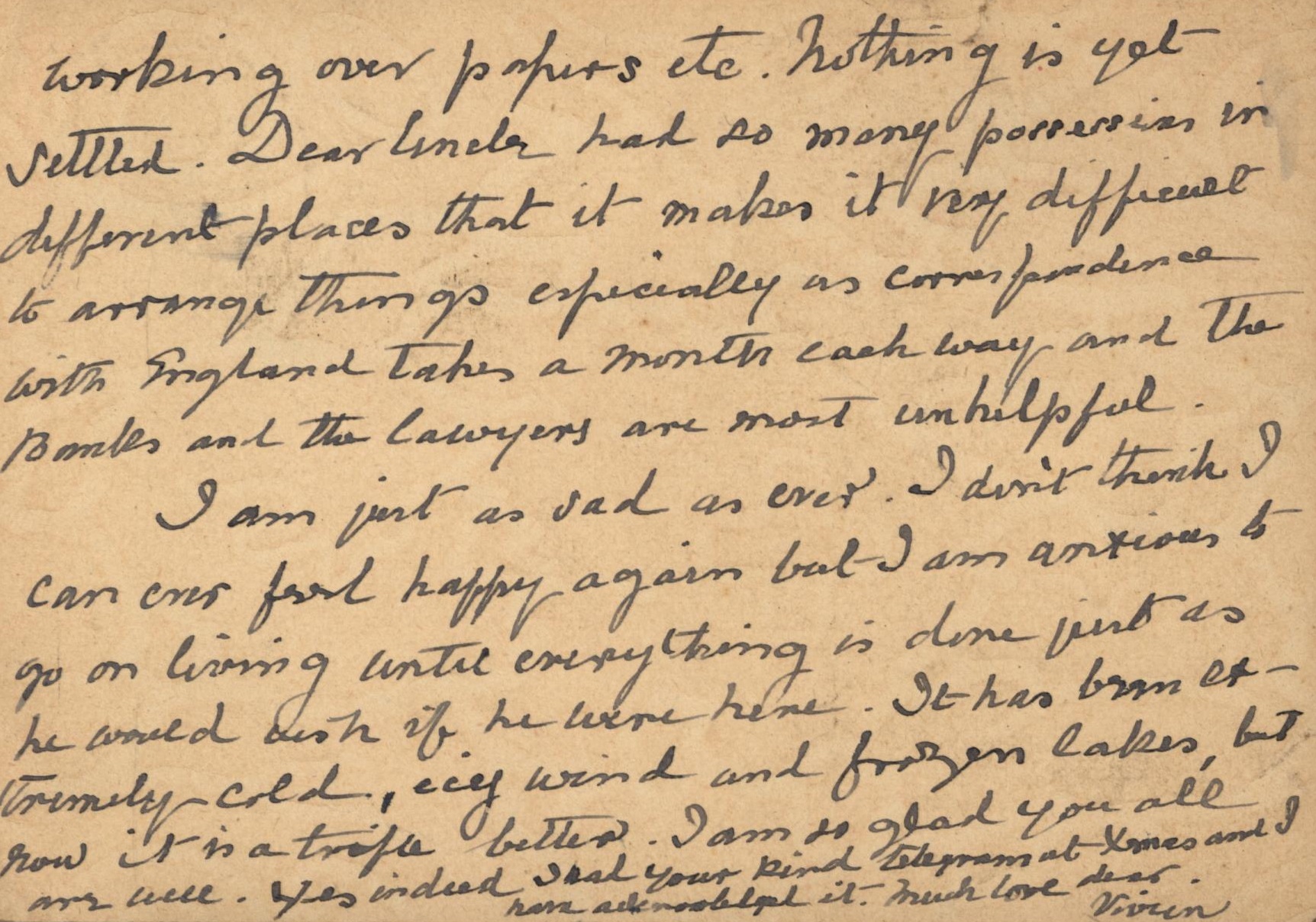 The only positive aspect appears to be her association with a friend, the Consul who “is very kind. He is now going to France and if he finds conditions there good, would like me to go there too for a better climate” [13 Oct 1930]. The following year, she writes that she is forced to live very economically as her inheritance remained unsettled although “the Consul is very good and does what he can to help” [27 Jan 1941]. 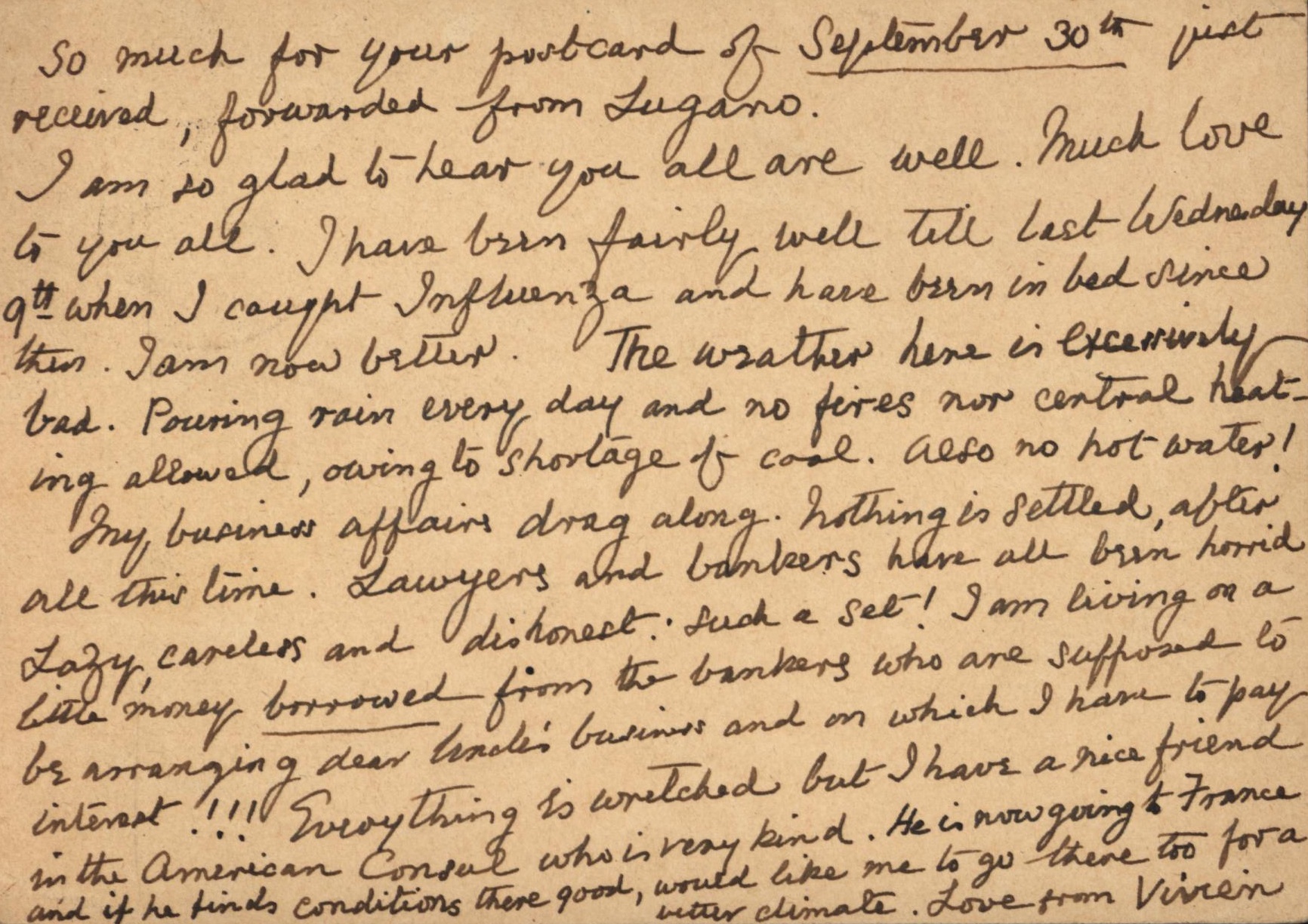 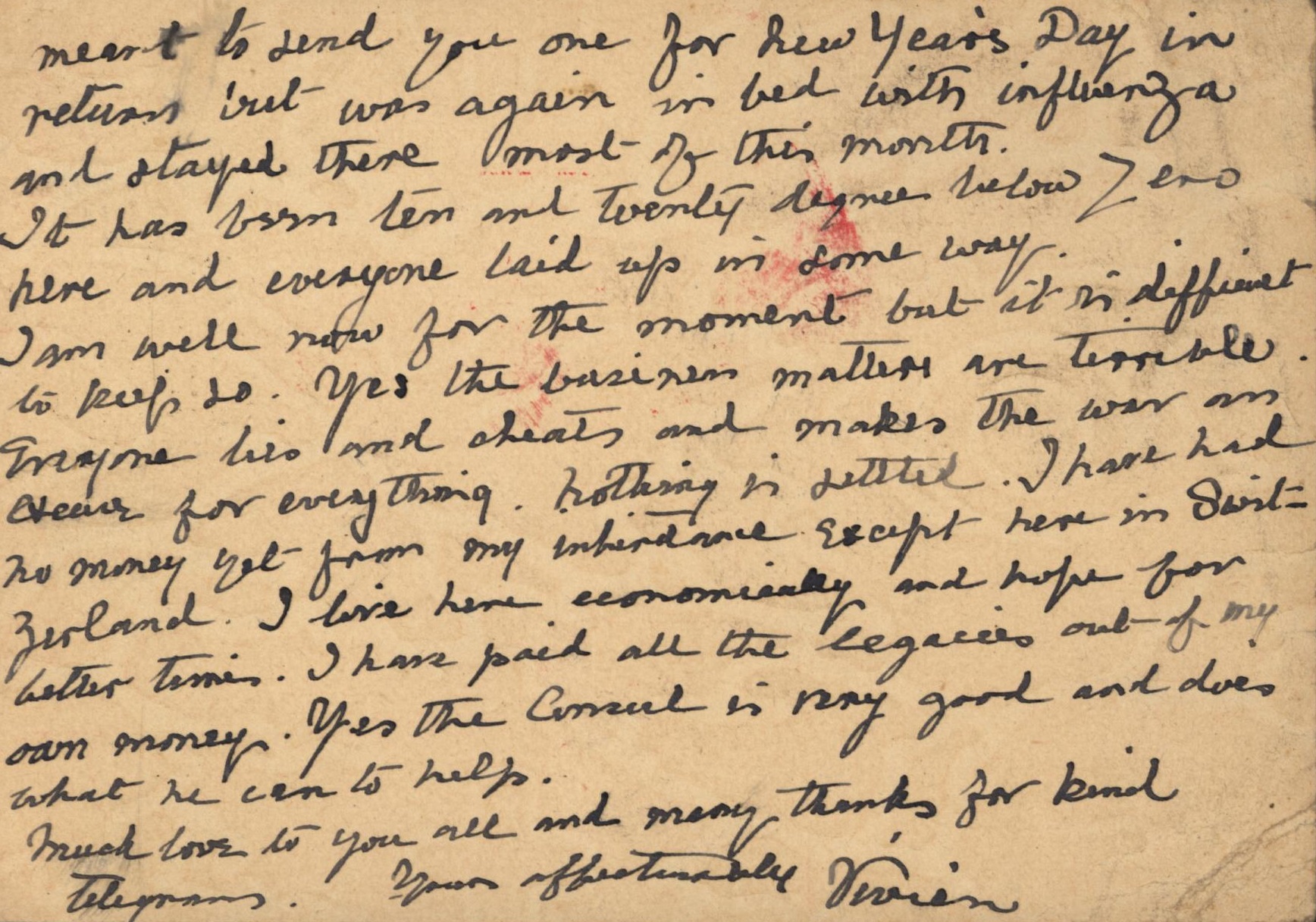 No doubt this is the American Consul of Marseilles, Leonard Bradford, who was later apparently sued by the administrator of Vivien’s own estate for having taken advantage of her in order to benefit from more than £100,000 which she had transferred to him. Whether there was any sort of romantic element to their relationship is difficult to say from the limited information Vivien gives. Perhaps not though, given that she left her remaining fortune to a Milan diamond dealer!