The United Kingdom joined the European Economic Community (as it then was) on 1 January 1973 after negotiations by the Conservative government led by Edward Heath. In the run up to the subsequent 1974 General Election the Labour Party pledged, in its manifesto, the United Kingdom’s first nationwide referendum on whether to stay part of the Economic Community on renegotiated terms or to completely part company. With a Labour victory, the new Prime Minister, Harold Wilson, followed through on his promise and a referendum was held on 5 Jun 1975. The outcome was an overwhelming victory (67%) for the ‘In’ campaign.

The 1975 vote in favour of Europe did not, however, end the debate on the United Kingdom’s membership of what is now a much expanded European Union.  As we await the results of a second referendum on whether to ‘remain’ or to ‘leave’ on 23 June, the Conservative Party Archive provides much research material to those interested in exploring the Party’s position with regard to the 1975 EU referendum and toward the EEC/EU more generally during this period.

The country’s entry into the European Community in 1973 was described as “an historic achievement. We take pride in it and we believe that our children will look back on it as the single most important  decision taken by us since the last war” and the Conservatives wished to share in building a stronger and more prosperous Europe :

In contrast to the Conservatives who were, with the exception of lone voices such as Enoch Powell, pro-Europe in stance, Labour saw several prominent members such as Tony Benn, Michael Foot and Barbara Castle publically and freely campaigning against continued membership of the EEC. They went so far as to issue a plan for the withdrawal strategy on a vote to exit the European Community: 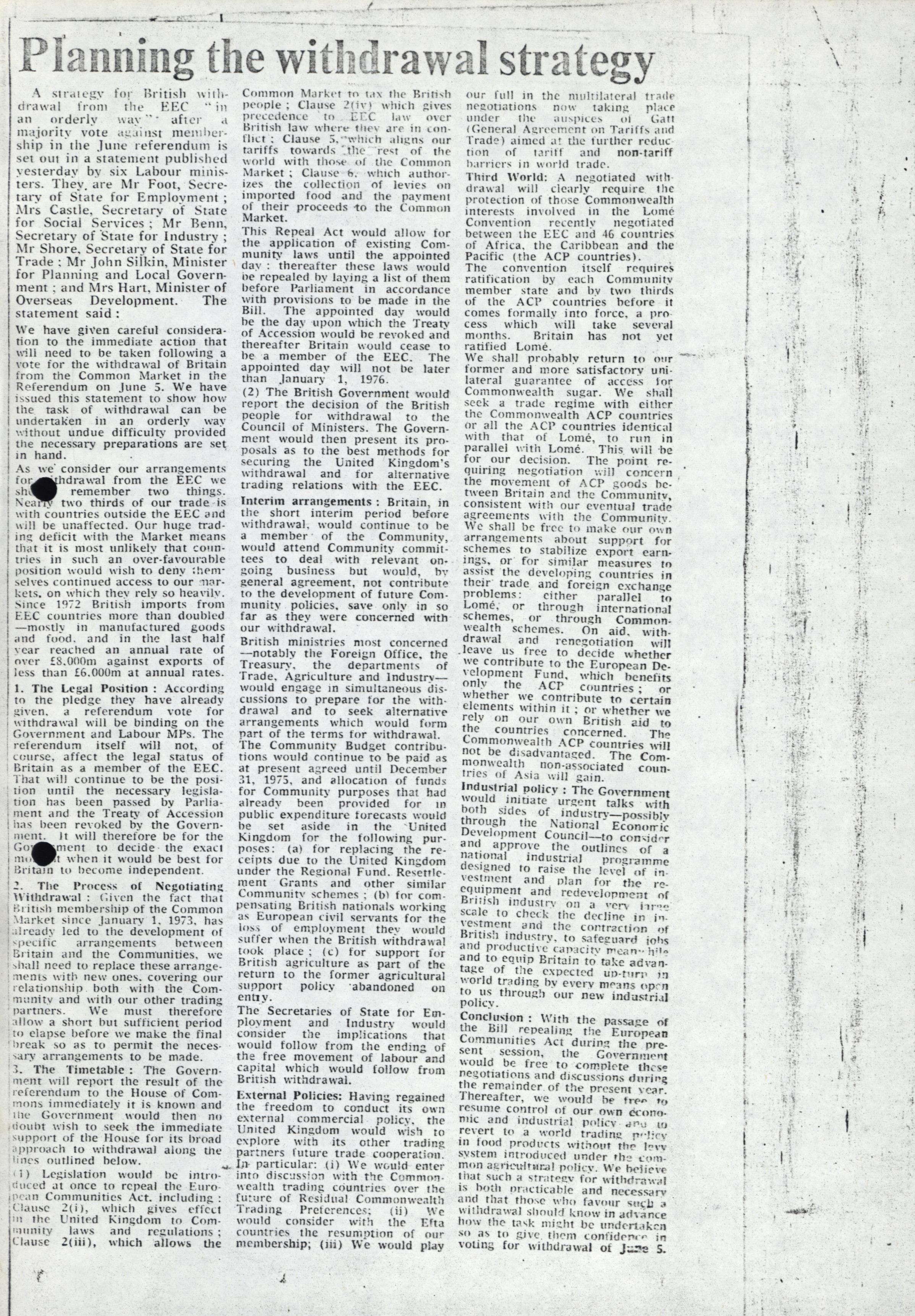 The ‘In’ Campaign was well supported and well organised with the umbrella ‘Britain in Europe’ supported by the European Movement , the national press (with the exception of the Morning Star), the business community, the Anglican Church, and broad cross party support. Having fought the last three elections on a pro-European footing, the campaign unsurprisingly reiterated the Conservative Party’s commitment to membership of the European Community. 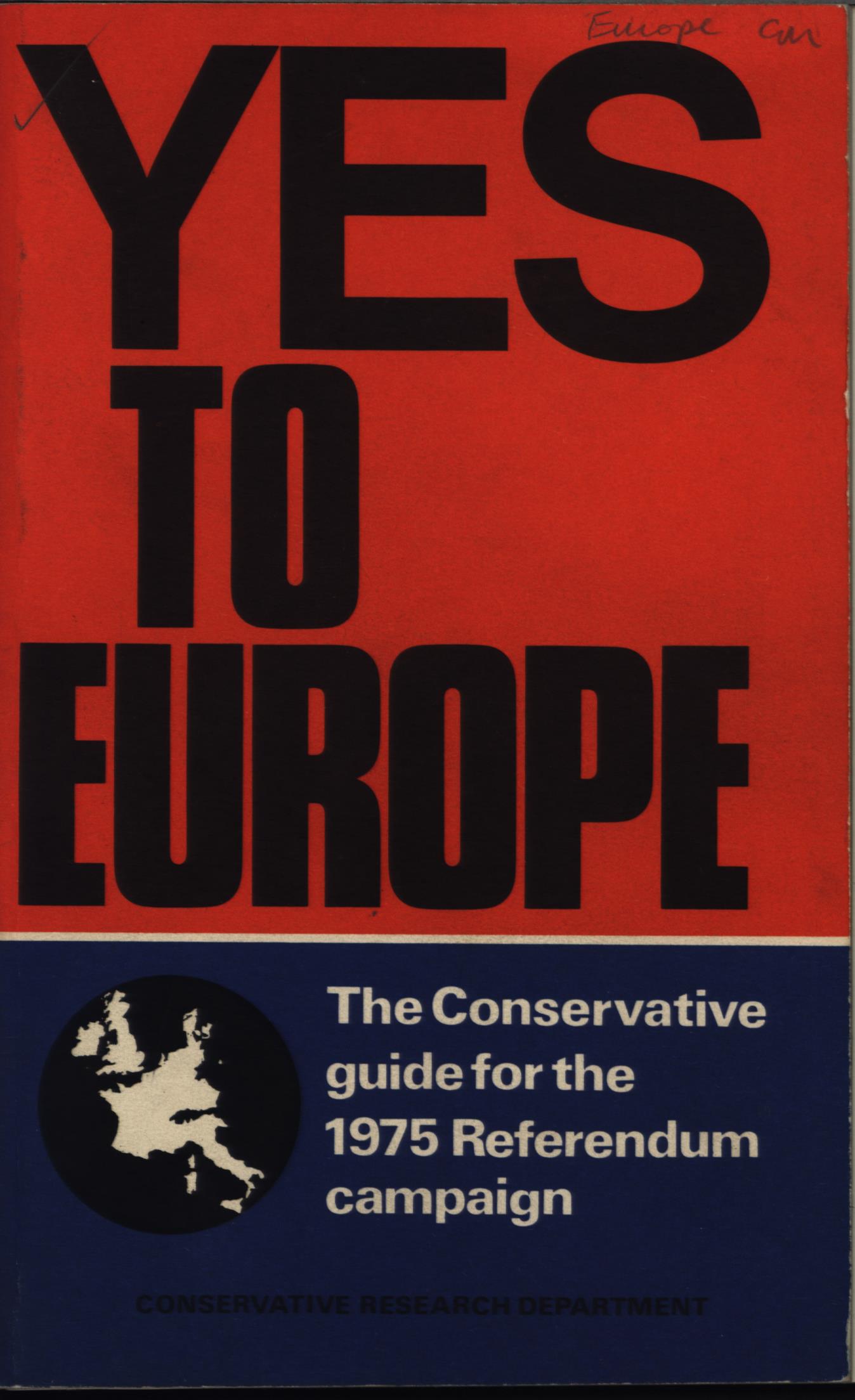 So what were the main points covered in the campaign literature?

On the economic and business side, emphasis was put on the importance of being part of single European home market with access to over 250 million people for British business, industry, jobs, and future prosperity; greater bargaining strength in matters related to issues such as energy and trade negotiations; and the ability to take advantage of the Common Agricultural Policy with the price stability and guaranteed food supplies that it brought with it.

In addition to advantages of economic influence, being part of the Community allowed Britain to exert greater political influence so that influence could be brought to bear on matters such as USA-Japanese relations, foreign aid, as well as being afforded peace and national security though a common defence capability.

Mention was also made of the social benefits of membership including important protection for UK workers’ rights and access to financial assistance from the European Social Fund and Regional Development Fund. 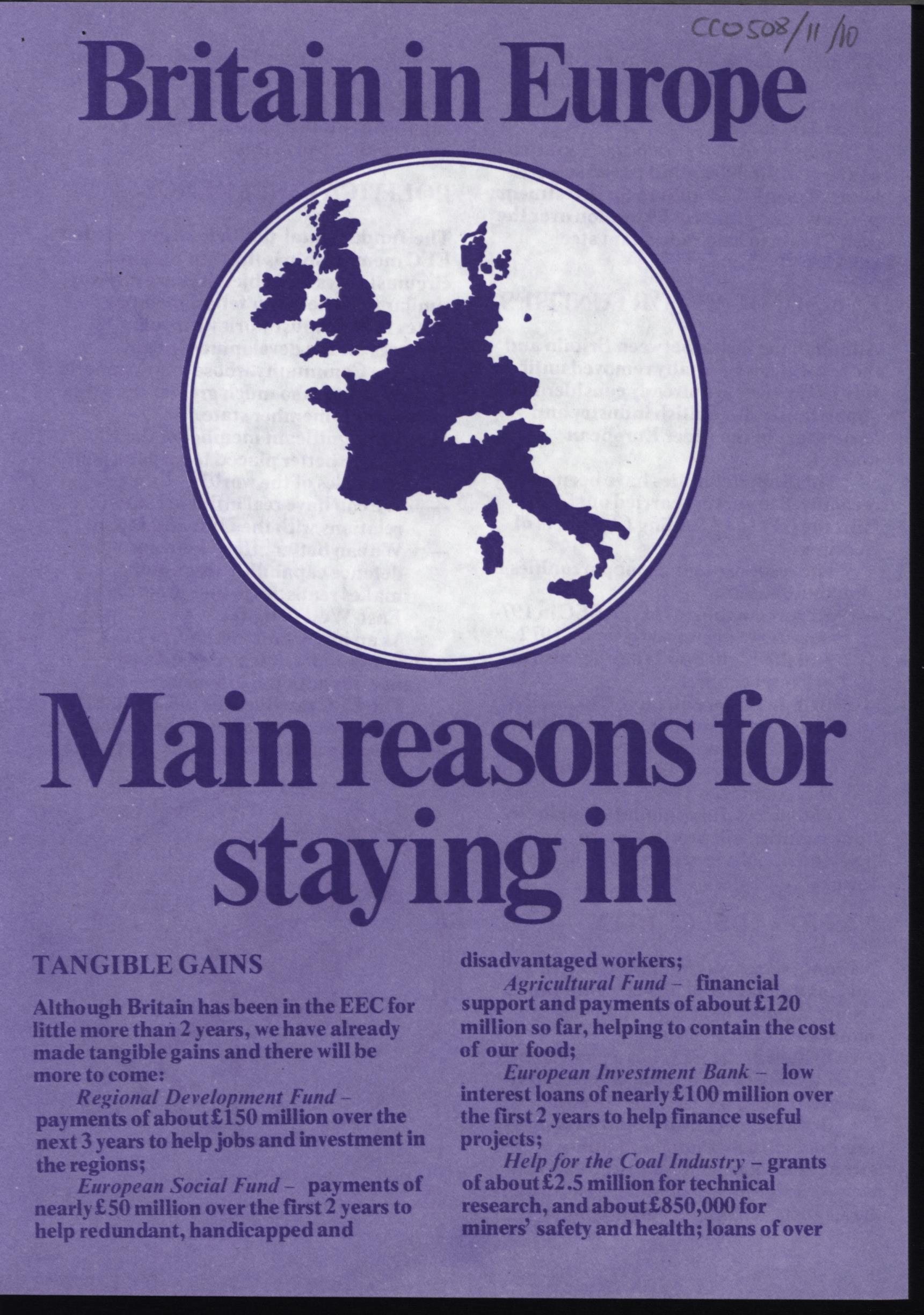 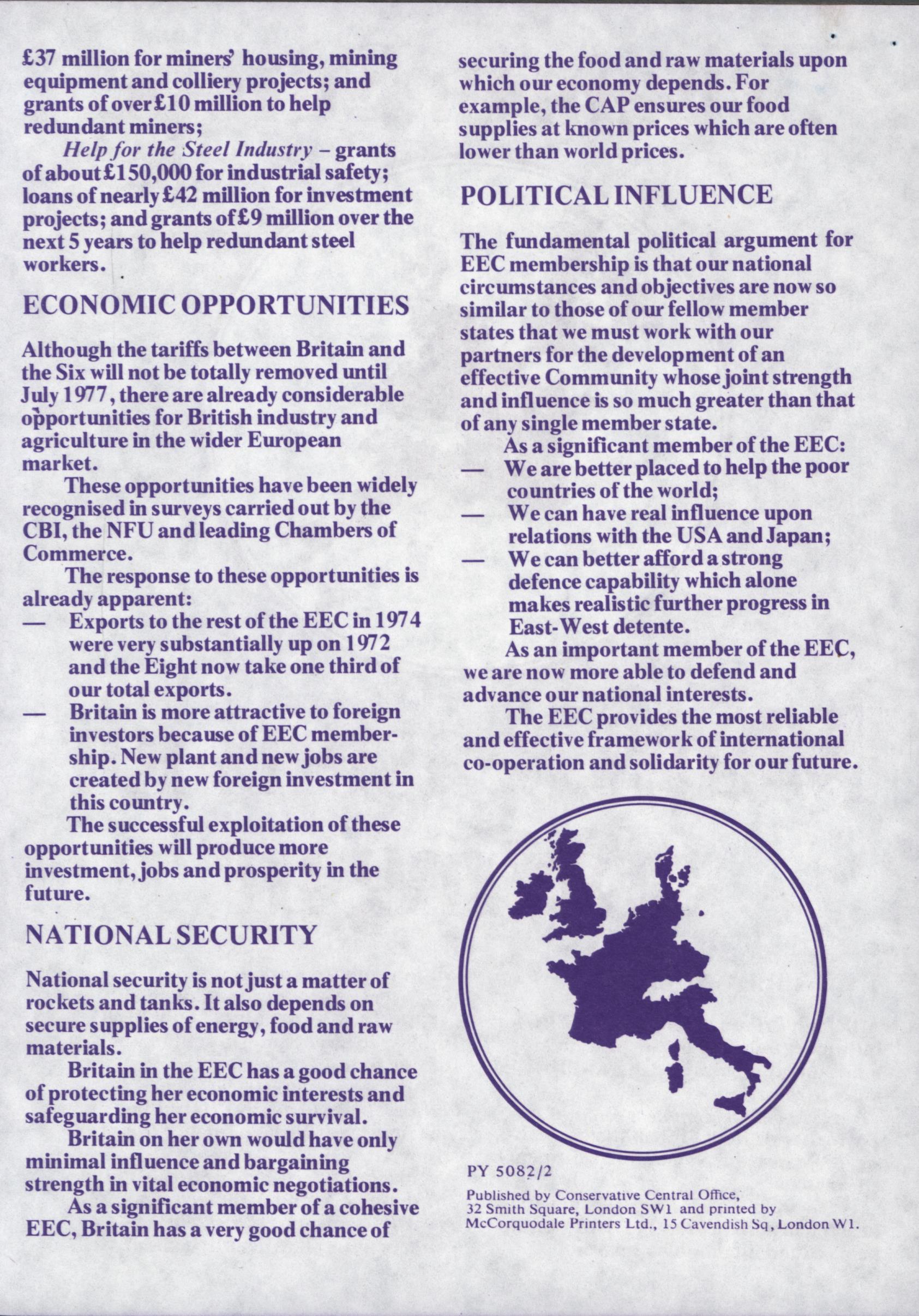 On the matter of sovereignty, the fact that Britain had already “pooled her nuclear capacity under the auspices of NATO and undertaken to share her oil supplies by the terms of the International Energy Programme” was mentioned. Also, it was made clear that

At present, every member state effectively has a veto on all matters of vital national interest raised in the Council of Ministers. The powers of the Commission are confined largely to administrative matters.

In sum, the campaign argued that “Britain cannot go it alone in the modern world. We need the extra strength and security” that the Economic Community affords [model speech ‘kit’ on Britain the EC, CCO 508/4/3]. Moreover, on 2 June, just days before the Referendum vote Margaret Thatcher, Party Leader, urged a yes to Europe vote concluding that, “ Let us remember that Britain does not break Treaties”. 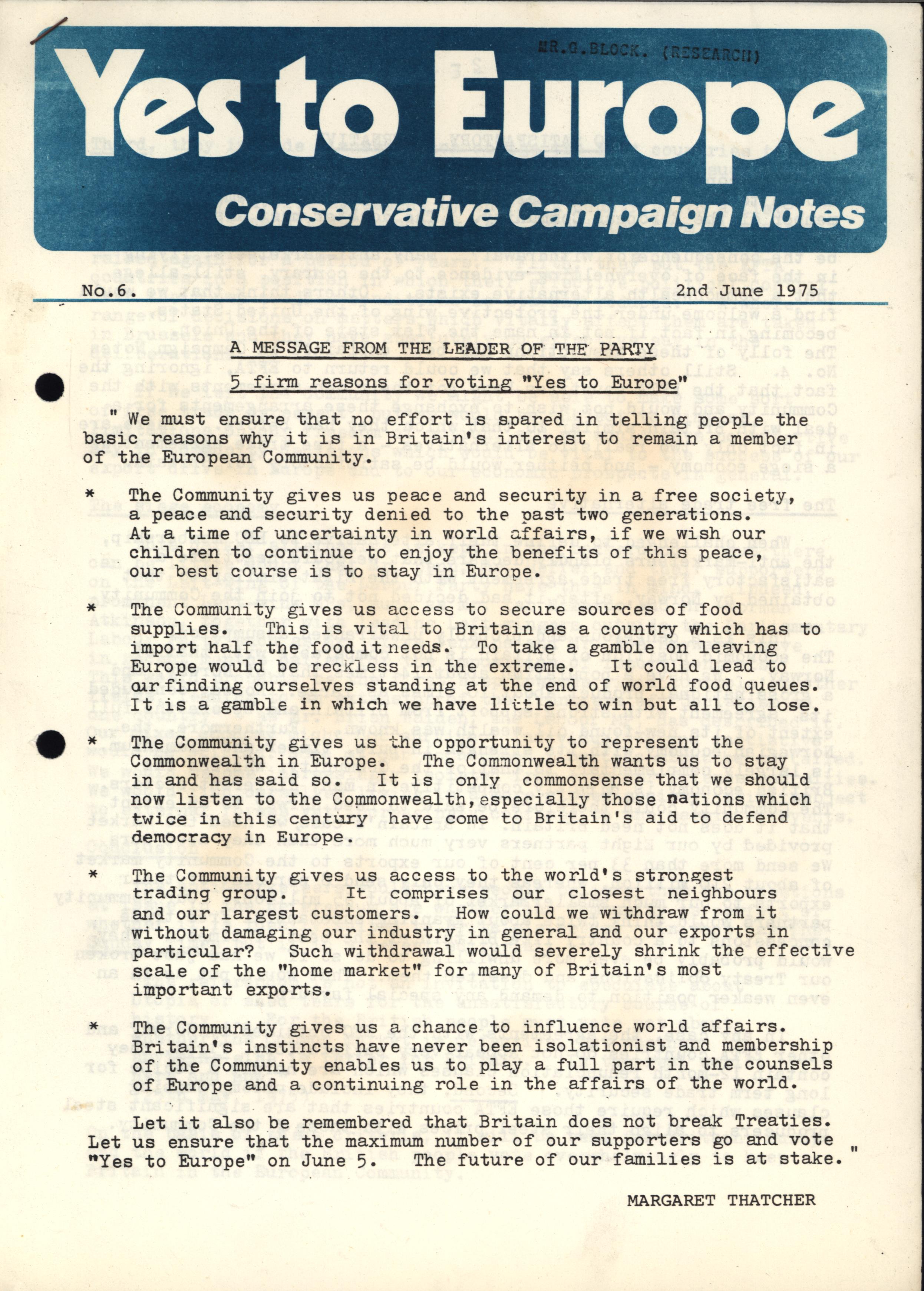 When the results of the vote were in, and British voters gave their response to the question asked of them – Do you think the United Kingdom should stay in the European Community (Common Market)? – the Conservative Monthly News edition for June/July 1975 [PUB 123/4] argued that:

Conservatives saw to it that Europe stays united. Responding to the Party’s call, they were the decisive factor in the massive popular vote for keeping the new Europe intact.