Here’s how you make a hot air balloon:

Take 23 yards of red and white persian silk, and sew them together in alternate strips.

Boil for about an hour over a slow fire, strain when cool, and mix with an ounce and a half of spirits of turpentine.

Use this mixture to varnish and seal the seams of the balloon.

Create gas to fill your balloon by combining 19 pounds of iron filings, 40 pounds of concentrated vitriolic [sulphuric] acid, and five times as much water in a barrel which is connected by a copper siphon to another barrel that is nearly filled with water. Connect that barrel to the balloon itself by a long metal tube.

(Avoid fire at all costs. And beware explosions.)

This is a description of a balloon constructed by a Mr. Rudge, which flew from Queen’s College, Oxford on the 19th of February 1784. It’s from the 21 February 1784 issue of Jackson’s Oxford Journal, and was copied out in the early 1900s by the local historian Percy Manning in his notebook dedicated to Oxfordshire sports and pastimes, where it fits between the sports of bear baiting and backsword (literally hitting other men on the head with a stick) [MS. Top. Oxon. d. 201].

But Mr. Rudge’s festively striped balloon was not the first to fly from Oxford. The first unmanned Oxford balloon had taken off ten days earlier from the St Clement’s garden of the botanist Dr. Sibthorp in front of a cheering crowd. And it was the brainchild of a Mr. James Sadler.

This Day a poor man in my neighbourhood found your Air Balloon, which was soon noised about, and finding that the Inhabitants were going to try Projects, I immediately took Possession of it

(I would dearly love to know what ‘try projects’ means. If a lot of silk magically dropped from the sky into my neighbourhood, I know what I’d do with it.) 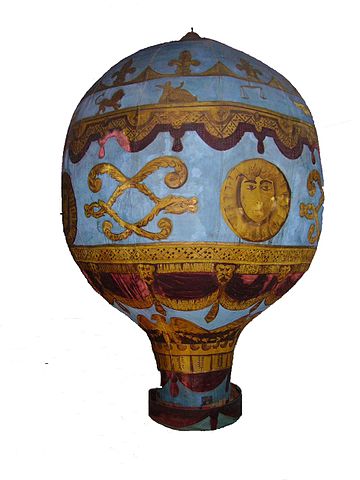 A model of the Montgolfier brothers’ balloon, at the London Science Museum (WikiCommons).

The truly impressive thing is that all this happened in Oxford less than a year after the very first public demonstrations of ballooning by the Montgolfier brothers.

And Sadler didn’t stop there. Jackson’s Oxford Journal followed the developing story very closely, and develop it did, amazingly quickly. By the 21st of February, the Journal was reporting that James Sadler was raising funds for a new, larger, balloon to be

filled with Air extracted from burnt wood, by a Method entirely new

On the 4th of October, only eight months after his first public demonstration and less than a year after the Montgolfiers, James Sadler climbed aboard a hot air balloon he had designed and built himself and headed into the skies. He took with him a set of scientific instruments and some very steampunk-

Oars, which are fixed to the Gallery for increasing the Motion, [and] are placed in such a Position as to move either in a vertical or horizontal Direction, and may applied for the Purpose of raising or lowering the Machine, at the Pleasure of the Aerial Traveller.

A month after that, Sadler did it again, this time in a brand new hydrogen balloon. Lifting off from the Botanic Gardens in Oxford, he drifted over Otmoor and Thame and managed to reach Aylesbury, about 20 miles away, probably scaring the living daylights out of unsuspecting people on the ground below.

All this meant that James Sadler, an Oxford native, was the first ever English aeronaut.

Not only that but:

He was the first to create an adjustable fire in the basket to manipulate the balloon’s altitude. He was also the first to use coal gas, an energy form which was only just being discovered. [BBC]

He also designed steam engines, in direct competition with Boulton and Watt, and improved cannon designs.

But who was James Sadler, this first, intrepid, English balloonist and inventor? Well, interestingly, he was… a pastry chef for the Lemon Hall Refreshment House, his family business on High Street in Oxford. Apparently not formally educated, he later worked as a University chemistry lab tech and then for the Naval Works Department, and he also founded a mineral water factory. Sadly not well known now, he is honoured in Oxford with a plaque but was once so famous that when he went to Cheltenham in 1785 to carry out a balloon flight, the entire town closed.

James Sadler made 47 recorded flights by 1815. Two of his sons also caught the ballooning bug although one, Windham, sadly died in a ballooning accident in September 1824. It wasn’t a safe pastime: although James himself lived a long life, dying aged 75 in 1828, he had survived being dragged along the ground for two miles after a fifty mile flight in 1785.

Local historian Mark Davies very recently published a book about Sadler, King of All Balloons: The Adventurous Life of James Sadler, The First English Aeronaut. Davies also recently gave a talk about Sadler at St. Edmund’s Hall, Oxford, which you can watch for yourself on YouTube.