Jeremy McIlwaine (Conservative Party Archivist) and myself left behind the quiet confines of the Bodleian Library where the collection is housed and took a very small number of items from the Archive ‘on tour’.

We housed our items in four display cases. On one side of the exhibition stand was a bound volume containing the original minutes of the first Annual Conservative Party Conference from 12 November 1867 [shelfmark: NUA 2/1/1]. In stark contrast to the present day where apparently twelve thousand people flocked to the ICC for four days of meetings, speeches, exhibitions, etc., the first conference was held in a pub, the Freemason’s Tavern in London and was attended by just fifty-five delegates and for just a few hours. 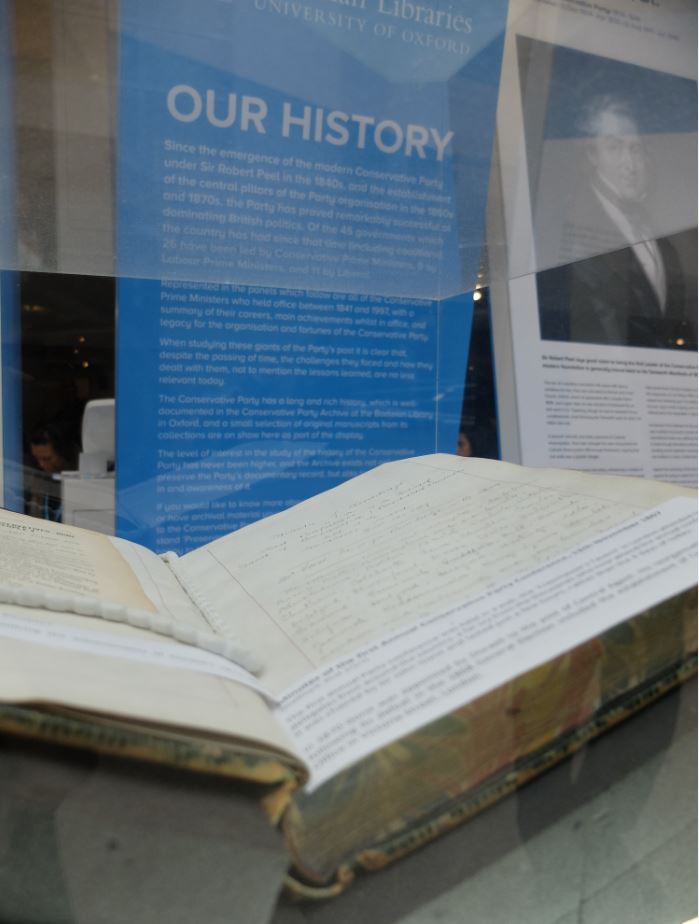 Another case played temporary home to some papers concerning Margaret Thatcher’s (then Margaret Roberts) journey to becoming an MP including a letter she wrote on 13 January 1954 regarding the removal of her name from an adopted Candidates’ list in which she said that:

I have quite made up my mind to pursue law to the exclusion of politics. 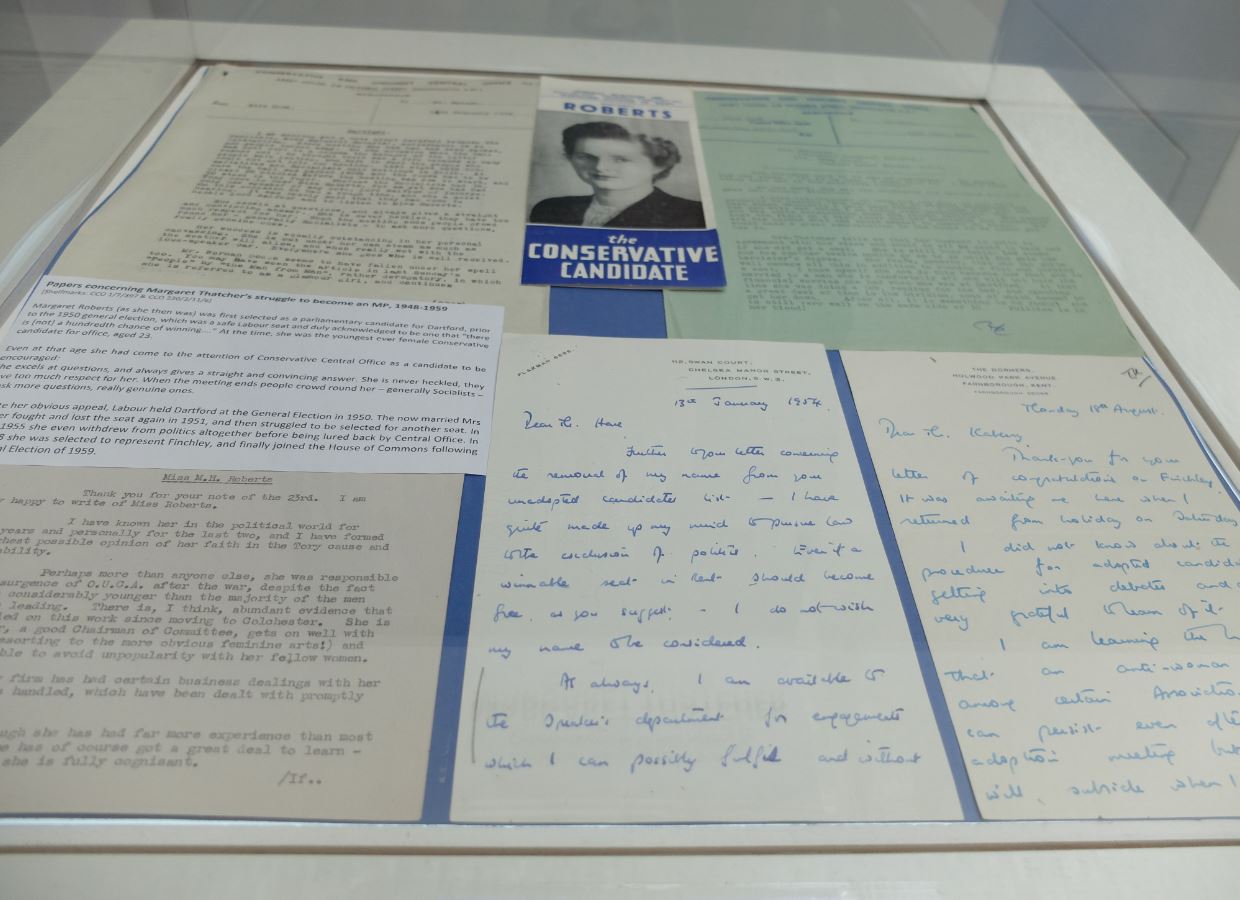 On the other side of the stand we included some Stanley Baldwin material, including a copy of the Conservative Party’s newspaper, Popular Illustrated (Vol. 1, No. 3 from July 1935) which featured an upbeat message from the then new Prime Minister as well as sample election leaflets from 1935. 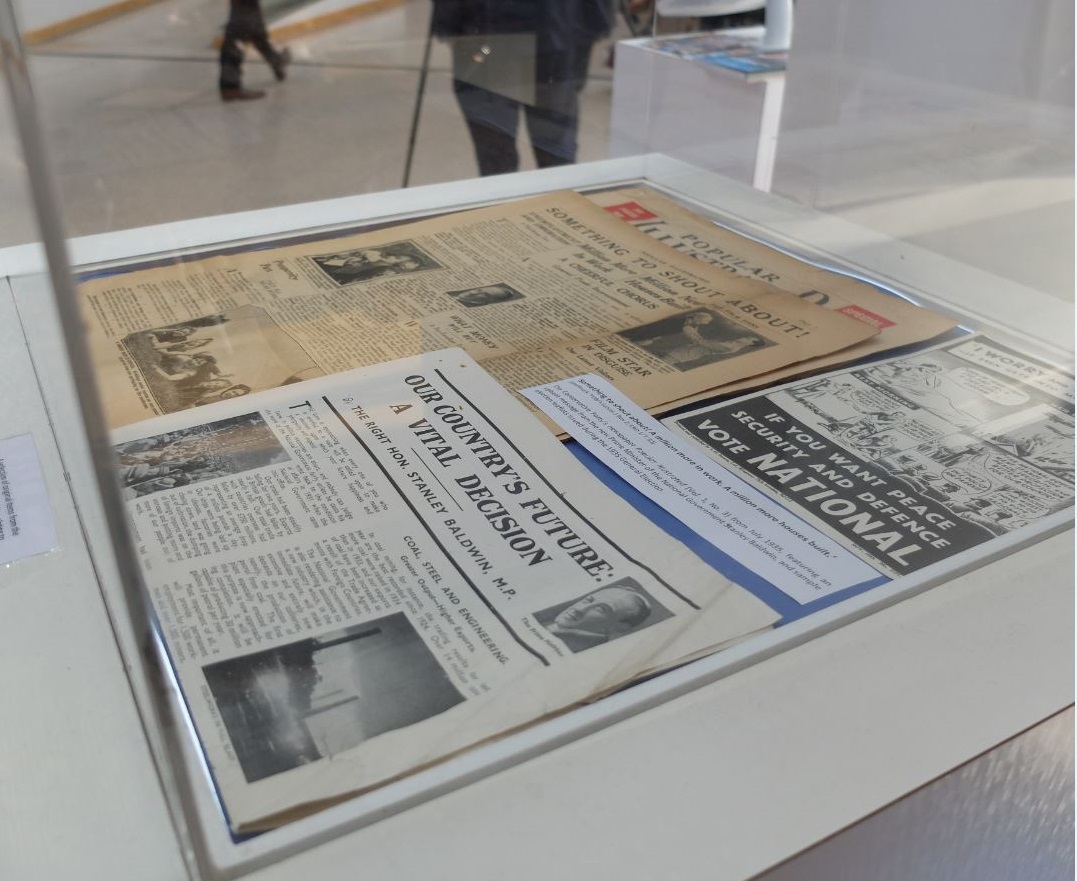 In the final case we had some Conservative Party election literature from 1945 when the Party fought a negative campaign against the Labour Party confident that Churchill’s popularity as wartime leader would lead them to victory. They were wrong. Some election leaflets attempted to pass responsibility for the pre-War appeasement policy onto the Labour Party, for the refusal of some of its MPs to support calls for the reintroduction of conscription and rearmament following the absorption of the rump of Czechoslovakia into Germany in the Spring of 1939. 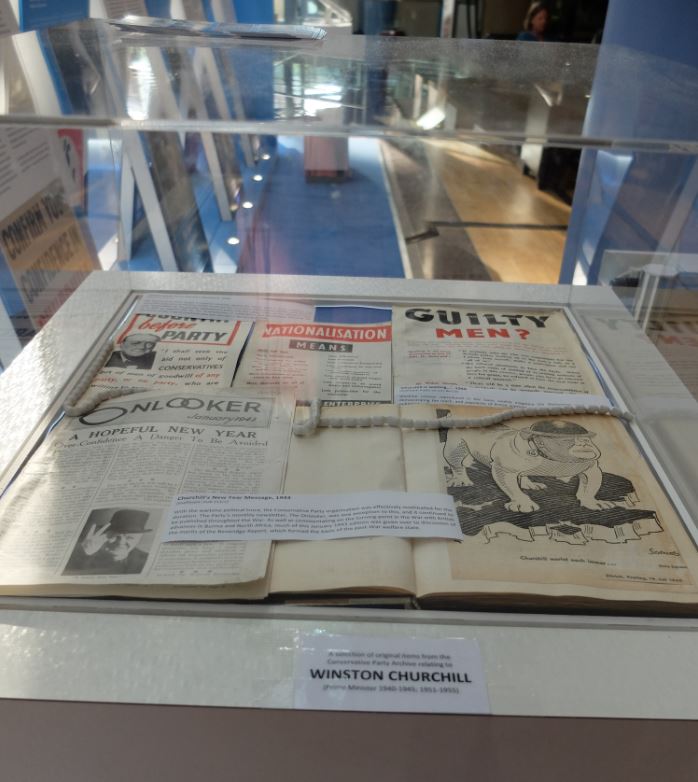 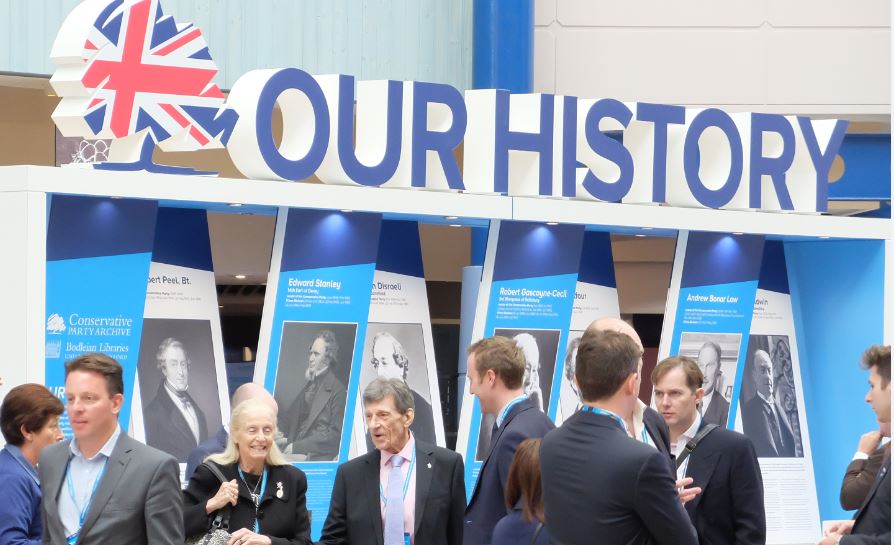 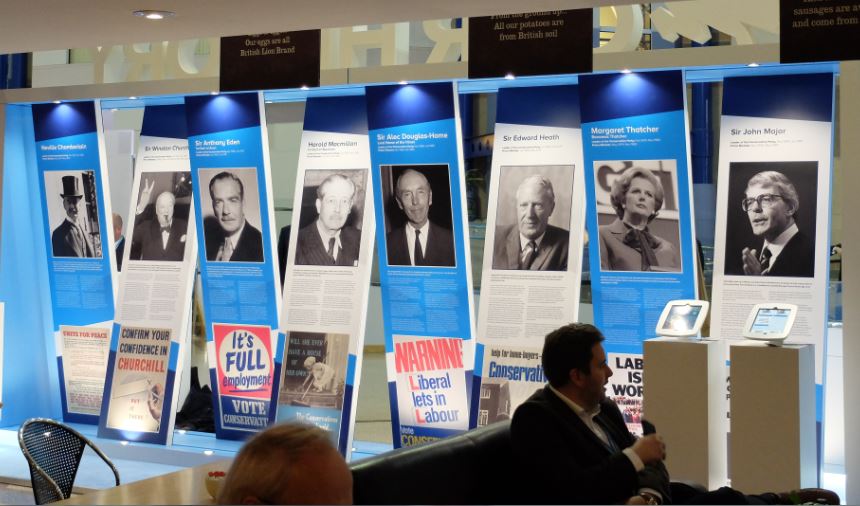 Located on level 3 of the ICC near a café (the later PMs actually looked down on diners) we welcomed a great many visitors who were interested to find out more about the CPA and how they might best take advantage of it, as well as generally chatting about the Prime Ministers featured in the display, including with some who shared personal family anecdotes. Philip May took some time out at the Conference to pay us a visit and, as a former student of history at Oxford himself, found the stand very interesting and remarked on how important it is to look after the Party’s past. He also very kindly offered to fill a gap in the CPA’s holdings regarding the current Prime Minister, his wife Theresa May. The stand was received positively and the past PMs featured in many ‘selfies’ and group photographs. I don’t know whether anybody found love whilst viewing our stand but certainly a number of people commented that it proved to be a great meeting place where future contacts and friendships were made.

Our second and very large display, The CPA: Preserving our Party’s History, marked the entrance/exit to Birmingham’s canal system and included information about what the CPA is, where it is housed, who it is for, and how it is funded, including how to become a friend of the CPA. 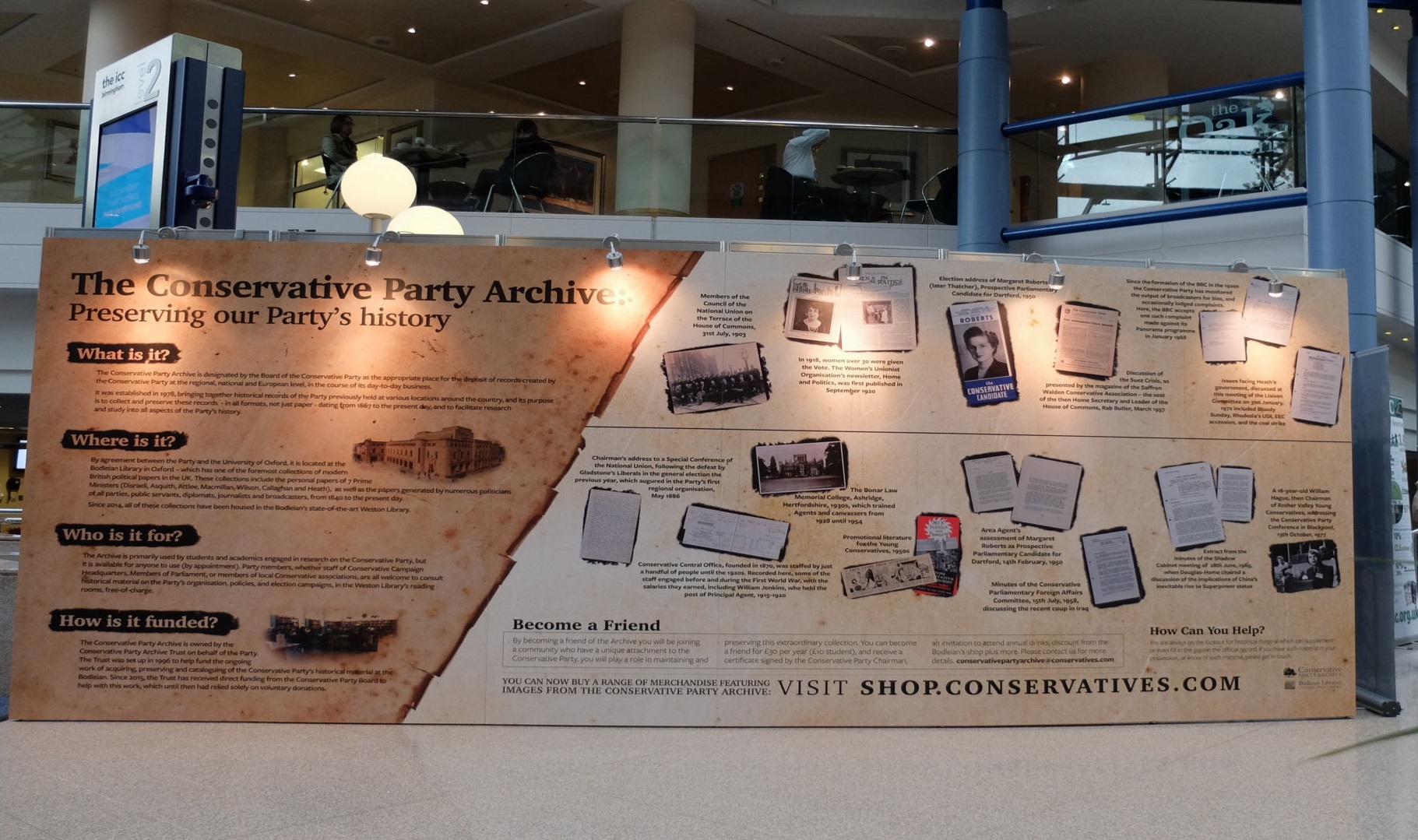 In addition to our information/display stands and the electronic billboard alerting everyone to our presence we were also able to showcase the new Conservative Party Shop website consisting of official Party merchandise featuring images from our collections via a number of tablets. 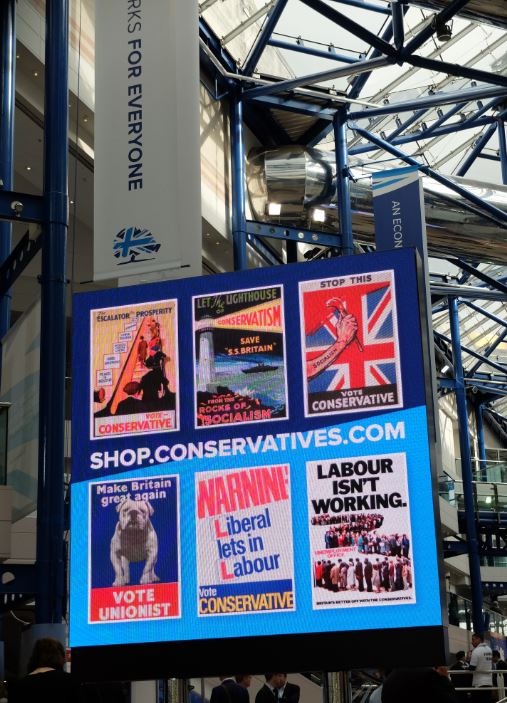 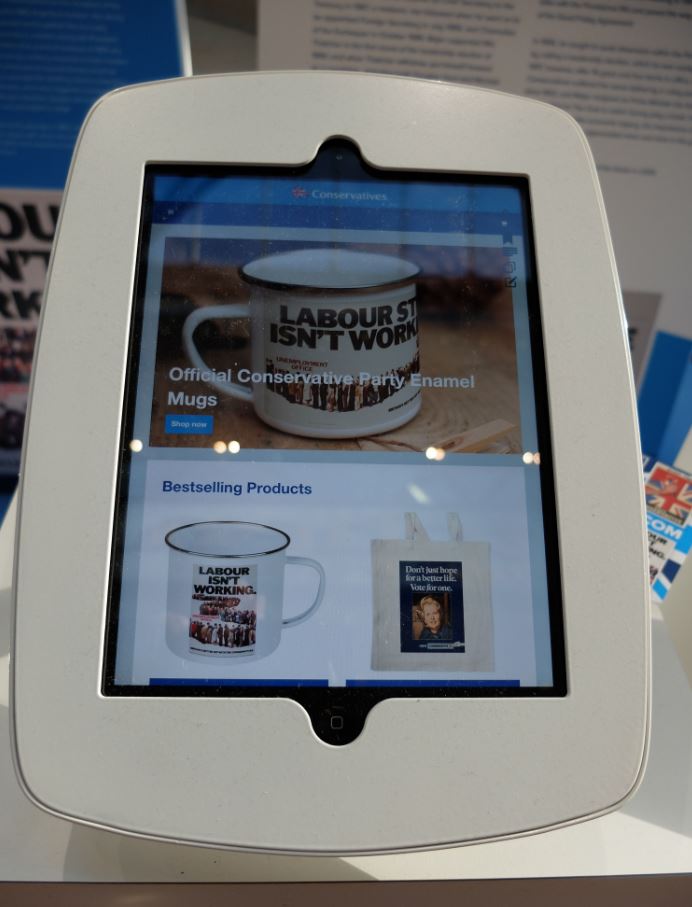 As a first time visitor to the Conservative Party Conference I was struck by the number of smaller groups affiliated to the Party in attendance, and with whom I was able to make contact with the aim of securing future additions to the CPA’s collections so that they might be preserved for future researchers. Moreover there were a number of independent exhibition stands including those selling their own products as well as campaign groups. Personal highlights from the latter category included charities like Battersea Dogs & Cats Home who were accompanied by two very lovely and well behaved four legged friends, Guide Dogs’ for the Blind who featured an impeccably behaved working dog who demonstrated the great work that they do, and the National Autistic Society who encouraged visitors to don goggles and headphones and virtually experience what it feels like for some children with Autism in an everyday situation. 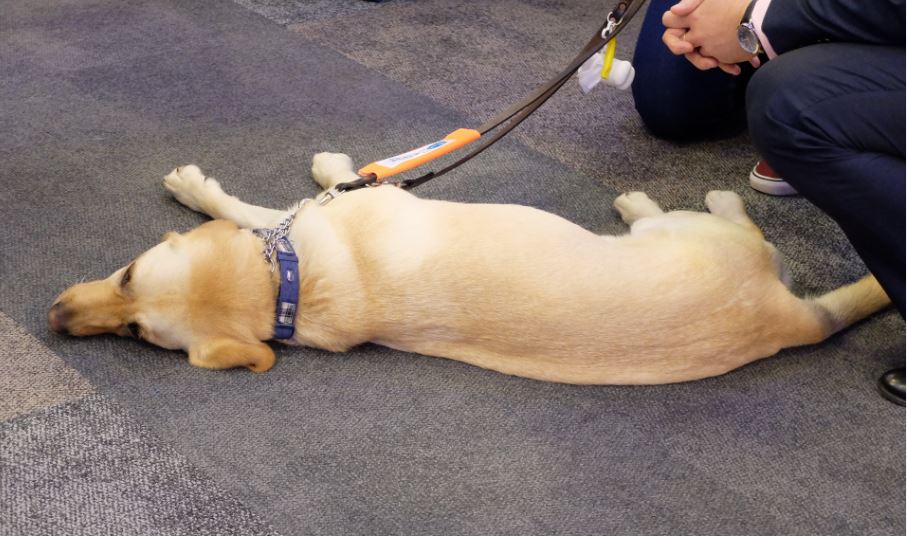