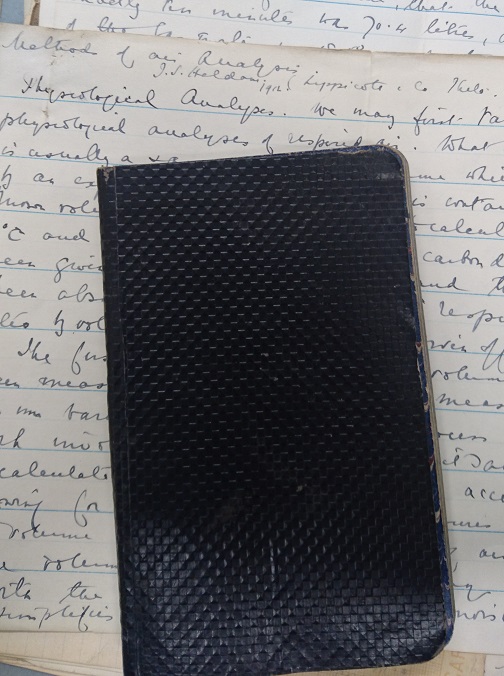 Many familiar names come up:  colleagues at the Oxford Physiology Department like Gustav Mann and Francis Gotch, L.P.F.G and C.P.F.G – FitzGerald’s sisters Laura and Catherine Purefoy FitzGerald – but also Haldane’s own children Jack (the then 12 1/2 years old, future scientist J.B.S. Haldane) and Naomi (7 1/2), as well as Gotch’s daughters(?) Veronica (11) and Audrey (12 3/4). 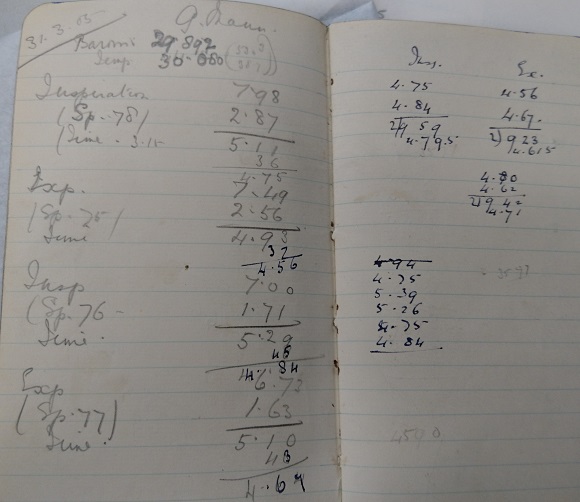 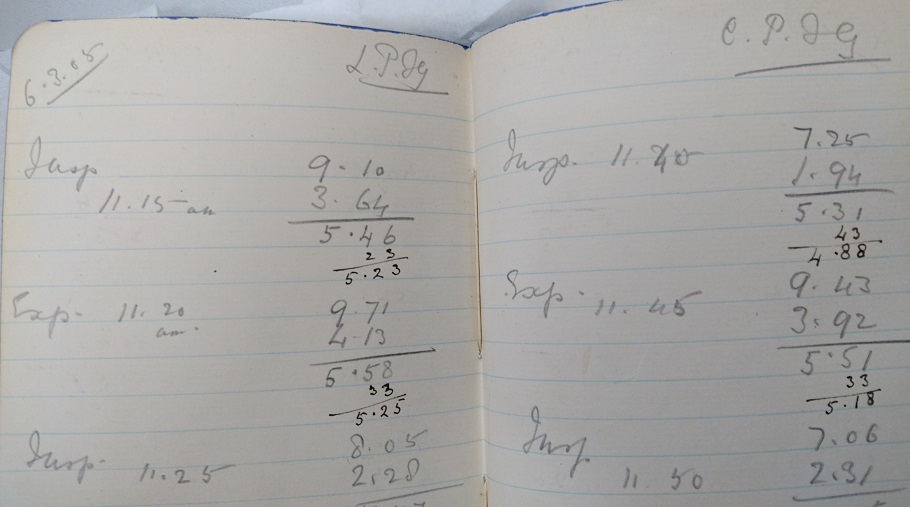 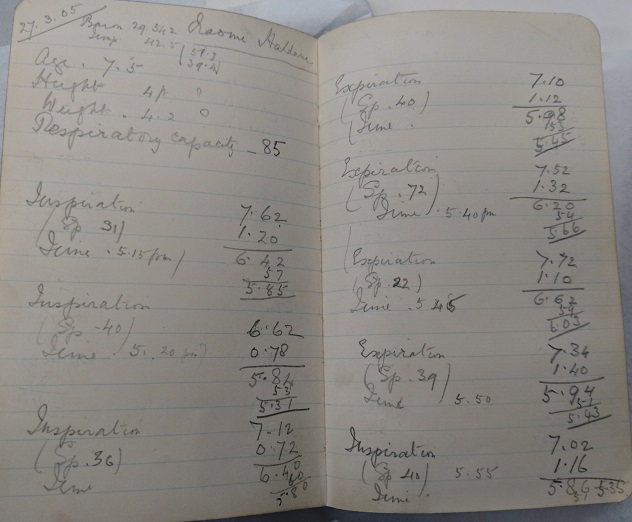 Even Jack and Naomi Haldane’s friends and classmates, and other pupils from the nearby Oxford Preparatory School (now the Dragon School), served as ‘guinea pigs’ – apparently, the children found the experiments quite exciting (…or possibly just better than their maths and Latin lessons).

The results of the experiments on men, women, boys and girls were published later in 1905 – jointly by FitzGerald and Haldane, but with FitzGerald being first author – in the Journal of Physiology  as ‘The normal alveolar carbonic acid [carbon dioxide] pressure in man’.

Haldane was (in-)famous for his self-experiments anyway, vividly described in Martin Goodman’s excellent Haldane biography Suffer and Survive: the Extreme Life of Dr. J.S. Haldane, and Mabel FitzGerald seems to have been keen to join him, as the last paragraph of ‘The normal alveolar carbonic acid pressure in man’ states: ‘A further experiment was made by. M.P.F.G. [Mabel Purefoy FitzGerald] to test the after-effects of moderate muscular exertion…’ meaning a bicycle ride of nine miles in 53 minutes.  Or, as FitzGerald’s notebook meticulously records: 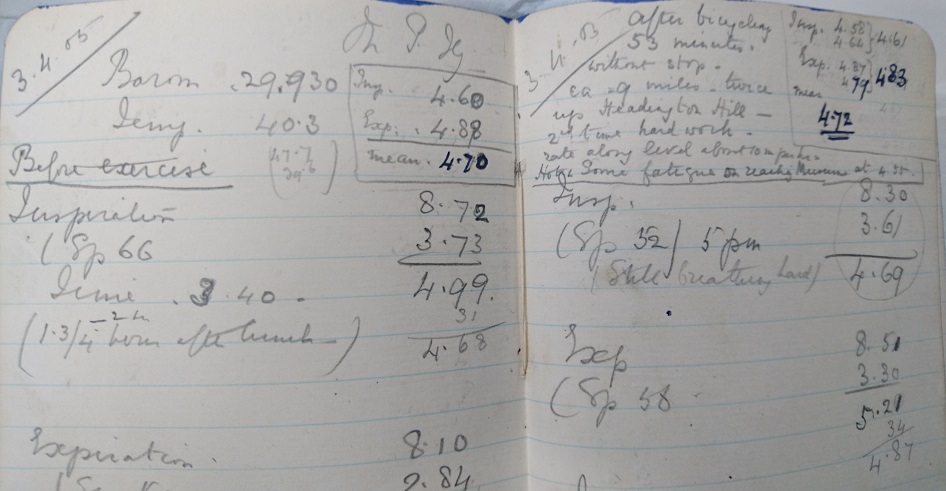 For anyone not familiar with cycling in Oxford: Headington Hill IS hard work, even once. Mabel FitzGerald must have been in very good physical condition (…and/or very determined!) especially considering that as a lady in the very early 20th century, she was probably wearing a heavy, full-length skirt or dress with a rather uncomfortable corset – and I doubt ‘lady bicycles’ had gears in these days!

Mabel FitzGerald with her bicycle at Shalstone Manor, her grandmother’s home in Buckinghamshire, 1896

However, to obtain reliable results, the experiments on the after-effect of physical exercise on alveolar CO2 pressure needed better controlled conditions than just fiercely pedalling around Oxford suburbs on a bicycle. Therefore, further self-experiments, conducted in July 1905, involved physical exertion under laboratory conditions – ‘working bellows’, a kind of early treadmill or stepper exercise to simulate cycling or climbing stairs, as well as controlled breathing: 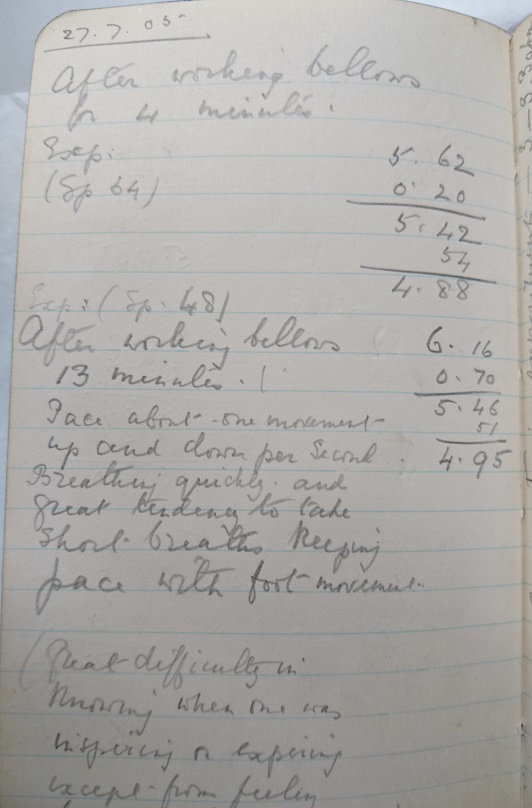 27 July 1905: “After working bellows 13 minutes […] Breathing quickly and great tendency to take short breaths. […] Great difficulty in knowing when one was inspiring or expiring.” 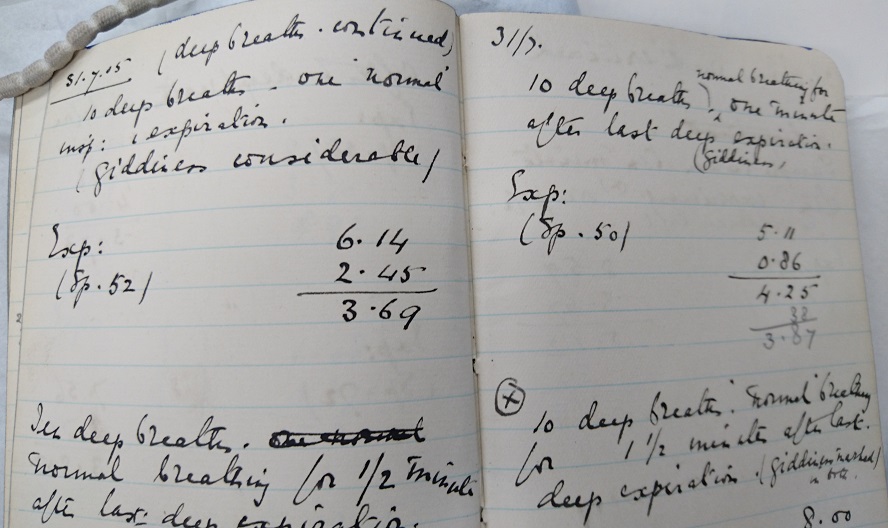 Not least, FitzGerald recorded details of her diet with the CO2 measurements she took from herself, several times a day: 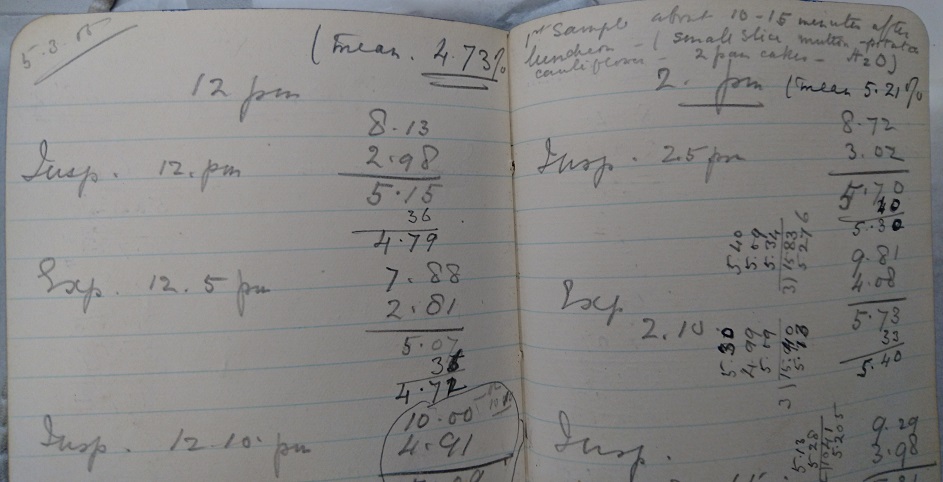 Her breakfast on the 5th March 1905 was ‘2 cups of coffee, 2 pieces toast and marmalade’ at 9 a.m., and the same the next day, but followed by ‘Beef Steak Pudding – Jam pudding’ for luncheon.

FitzGerald did not pursue the ‘alveolar CO2 pressure and diet’ question, but instead took the research that she and Haldane had started in 1905 into hospitals, looking at patient cases at the Oxford Radcliffe Infirmary and elsewhere to examine ‘The alveolar carbonic acid pressure in diseases of the blood and in diseases of the respiratory and circulatory systems’. The result of this work was published in Journal of Pathology and Bacteriology in 1910.