Oxfam’s first minute book, recording the founding of the organization on 5 October 1942 in response to suffering behind the Allied blockade in Greece and other occupied countries, is now on display in the ‘Bodleian Treasures’ exhibition at the Weston Library and online.

The exhibition brings together some of the most iconic documents from the Bodleian’s collection of 12 million items, displayed in pairs. The Oxfam minute book is paired with a Poetical Essay on the Existing State of Things by ‘a Gentleman of the University of Oxford’ identified as Percy Bysshe Shelley (1792-1822). This poem against war and tyranny was published by the 18 year old Shelley in 1811, shortly before his expulsion from Oxford for publishing a pamphlet on atheism.

As we near the 75th anniversary of that crucial meeting in the University Church later this year, we expect renewed interest in the origins of Oxfam. The first minute book will no doubt be revisited! 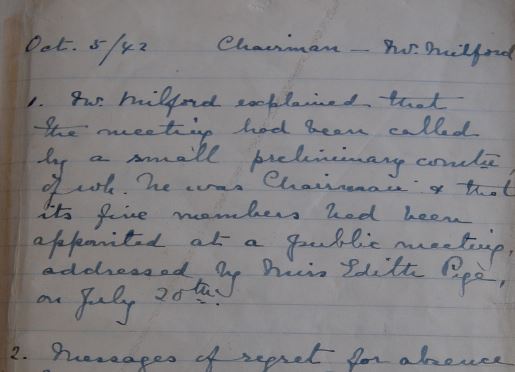