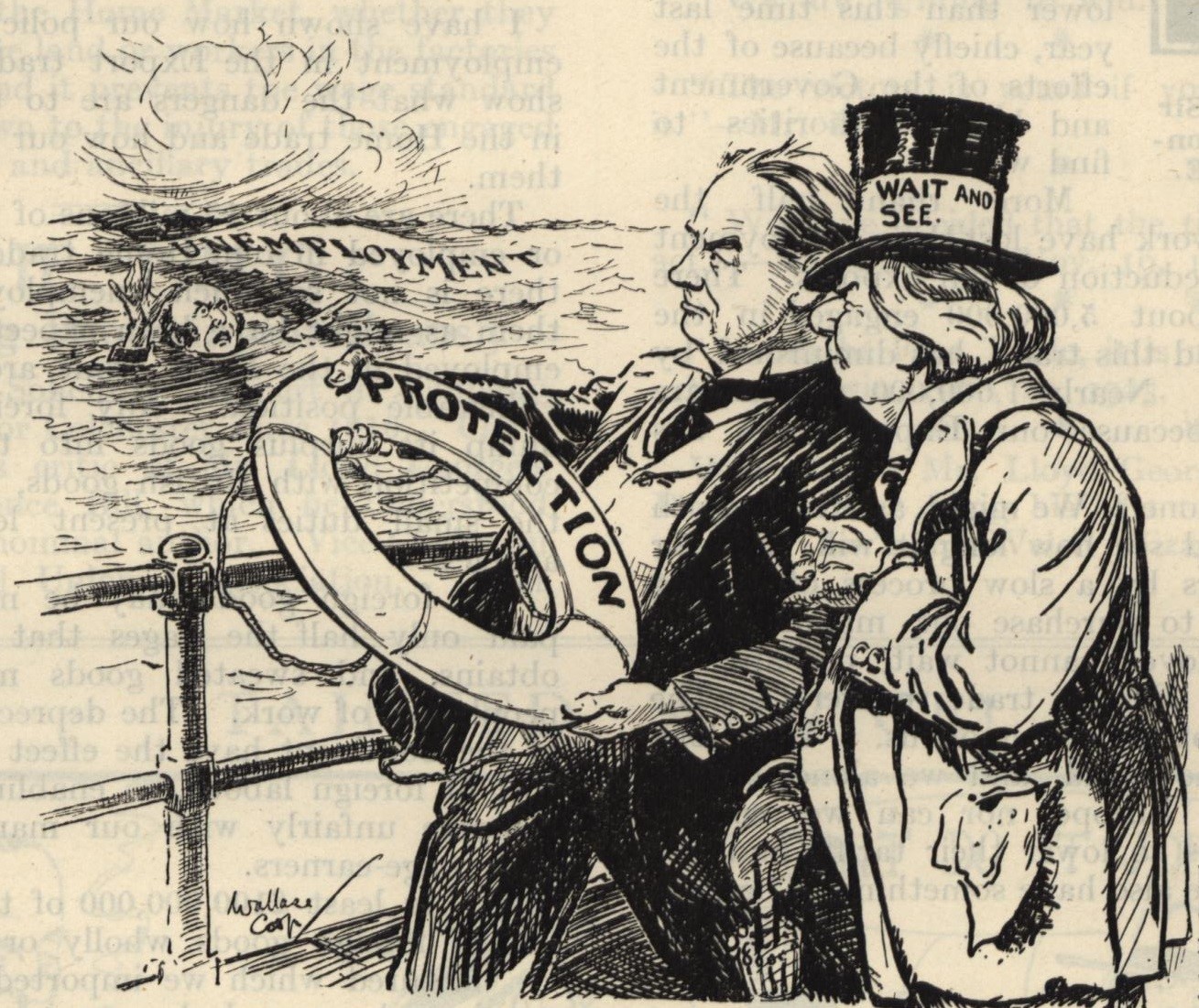 The 1923 general election no doubt also came as a surprise to many both inside and outside Westminster. The previous year had seen the end to Liberal-Conservative coalition government with a return to power by the Conservative Party with a large majority. Thus, when the Conservative leader, Bonar Law, resigned in May 1923 due to poor health and Baldwin inherited his premiership, the Party might have enjoyed four more uninterrupted years in power. Baldwin decided to call a general election that same year on the divisive issue of tariff reform (which had failed to win popular support in 1906 [PUB 212/3/1]) as the solution to increasing unemployment and worsening economic conditions. This policy contradicted assurances given by his predecessor that such a fiscal change would not be made by the government. Perhaps it was because Baldwin had concluded (wholly or in part) that protectionism as opposed to free trade was the way forward for the nation that he sought a direct mandate from the electorate.

In essence, the campaign argued that protection would prevent unfair competition and offer British manufactured goods a fair playing field, affording a greater degree of economic stability, leading to increased rates of employment and improvements for working men and their employers:

[England] allows foreign goods to come into the country free of all tax, so that we find work for the foreigner instead of giving our own labour preference.

The Party set out its approach in various policy leaflets: 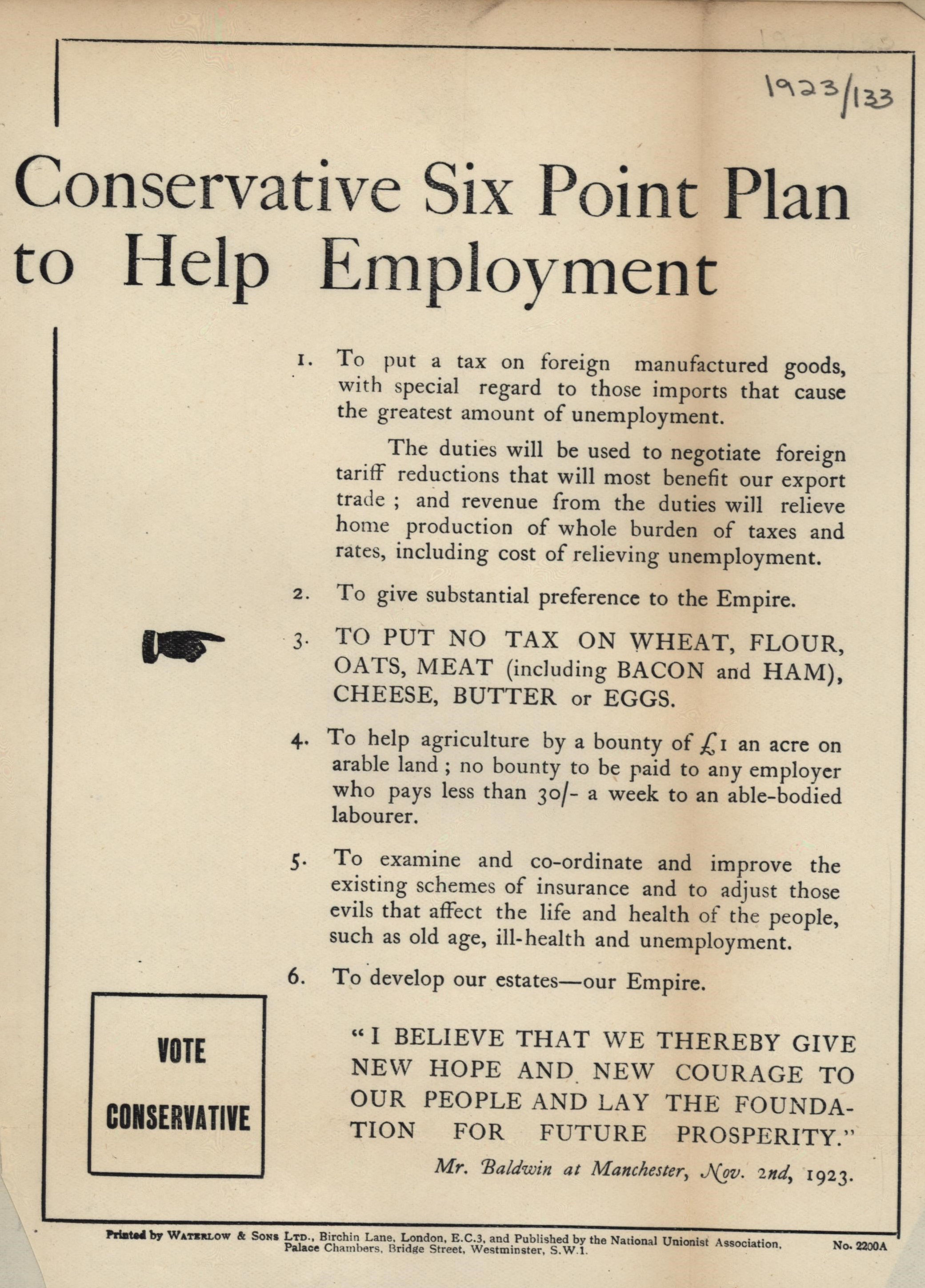 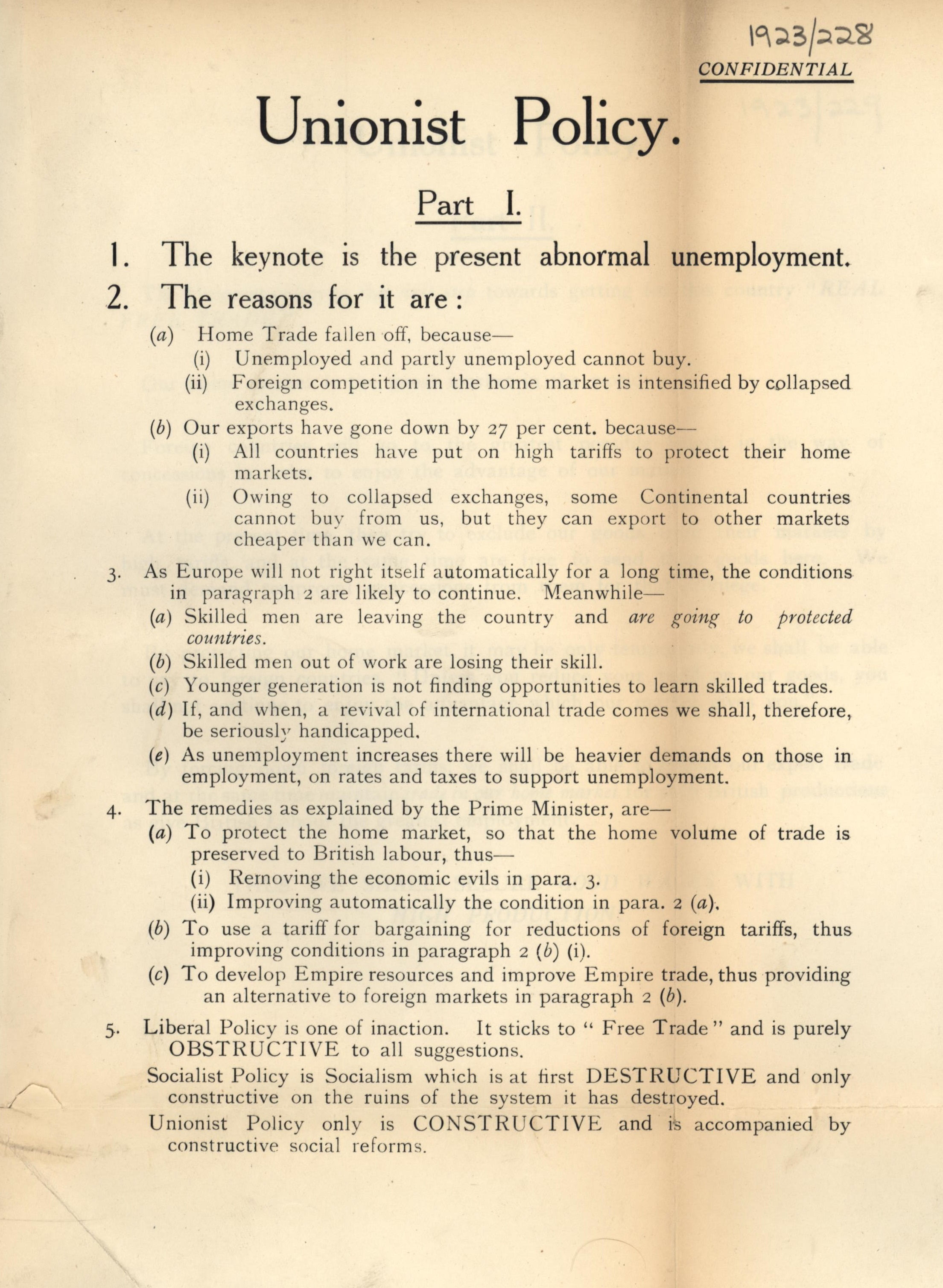 An important element of the campaign was the obvious determination to appeal to the working classes who had been hit hard with unemployment. 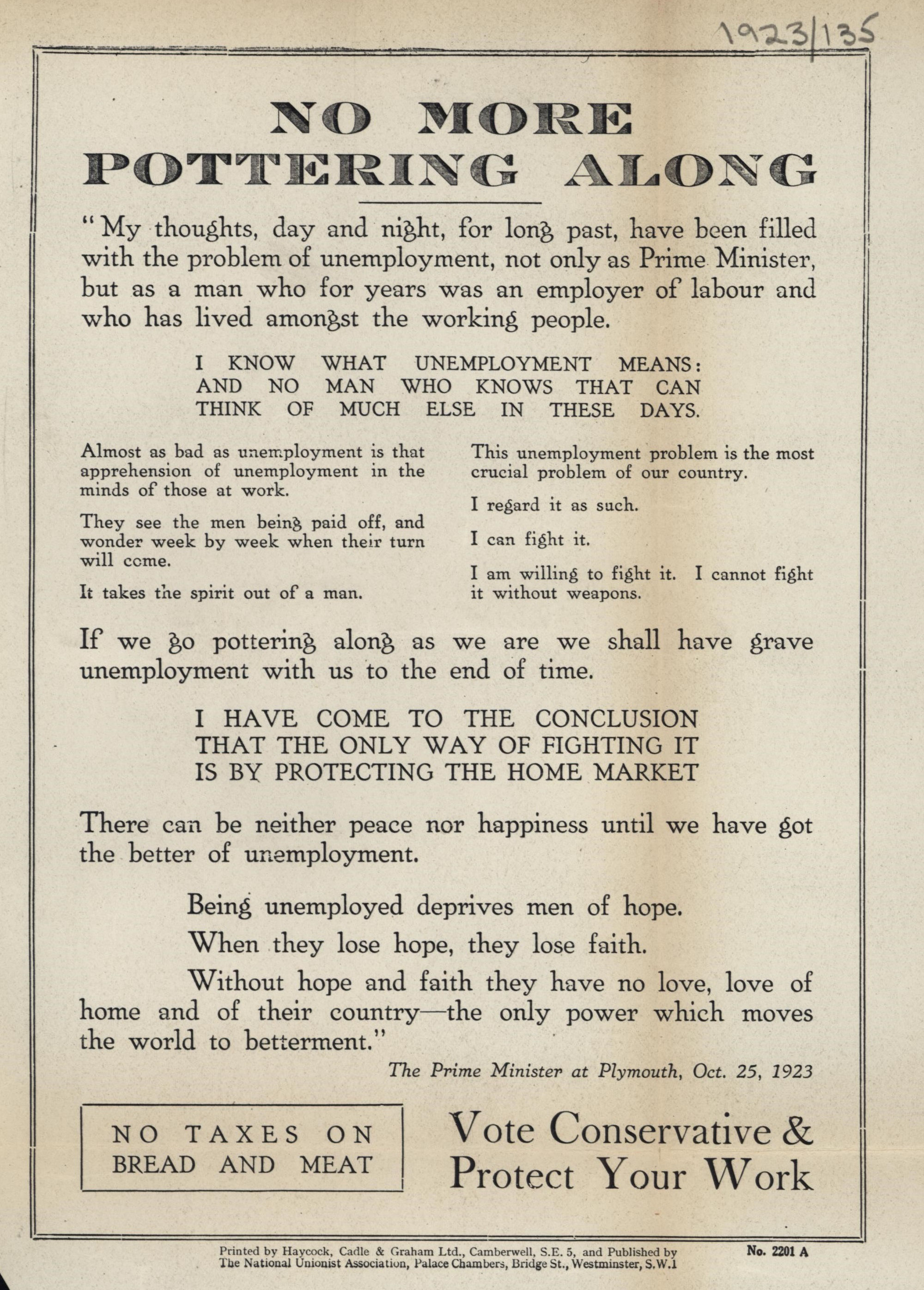 Reference was made to the perceived danger to British workers by foreign workers for example:

Much was also made in the campaign of the apparent disparity between a free trade Britain and other nations, most particularly the United States of America, whose labour force could prosper as a consequence of their country’s protectionist methods which made foreign (including British) goods much more expensive for consumers than domestically produced items: Little wonder then that skilled British workers were said to be leaving for countries like the USA which afforded them greater employment opportunities through protectionism [see for example, PUB 39/1:1923/138]. So-called ‘brain drain’ is clearly not a new thing by any stretch.

The Party campaign appealed not only to male workers but also to women who had attained the right to vote only a few years before in 1918 (although not yet on equal playing field with their male counterparts which came in 1928 when the age restriction was reduced to 21 in line with men).

One campaign leaflet constituted a direct appeal to women voters from the Prime Minister himself: 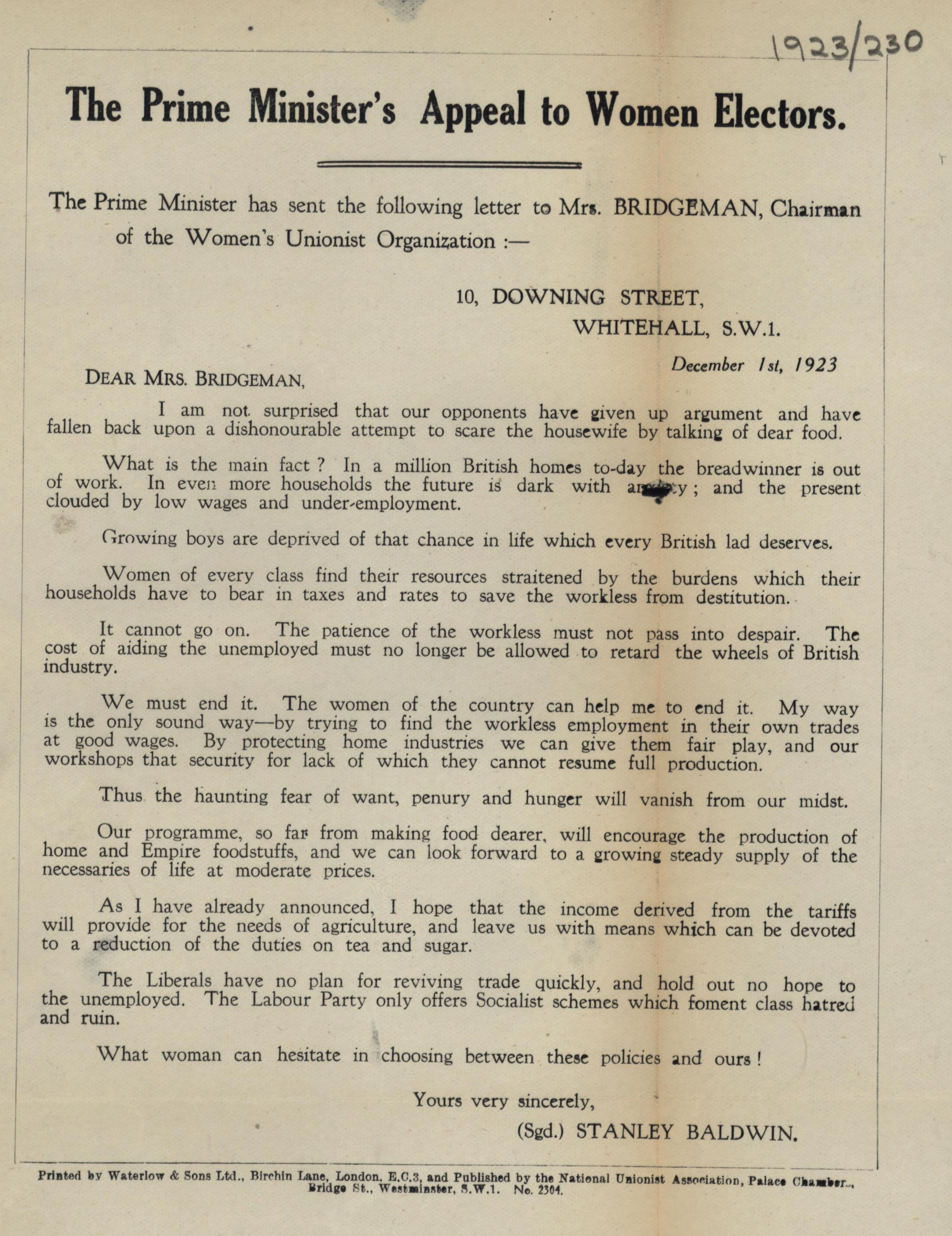 Other leaflets seek to address women directly as forming an important part of the Conservative plan such as: “Mother’s part in Mr. Baldwin’s plan is to vote Unionist, for Protection for Father’s work against Foreign labour” [PUB 39/1:1923/150]. Then there are those which try to speak to women where the current state of economic affairs was thought to hurt them most – in the home: 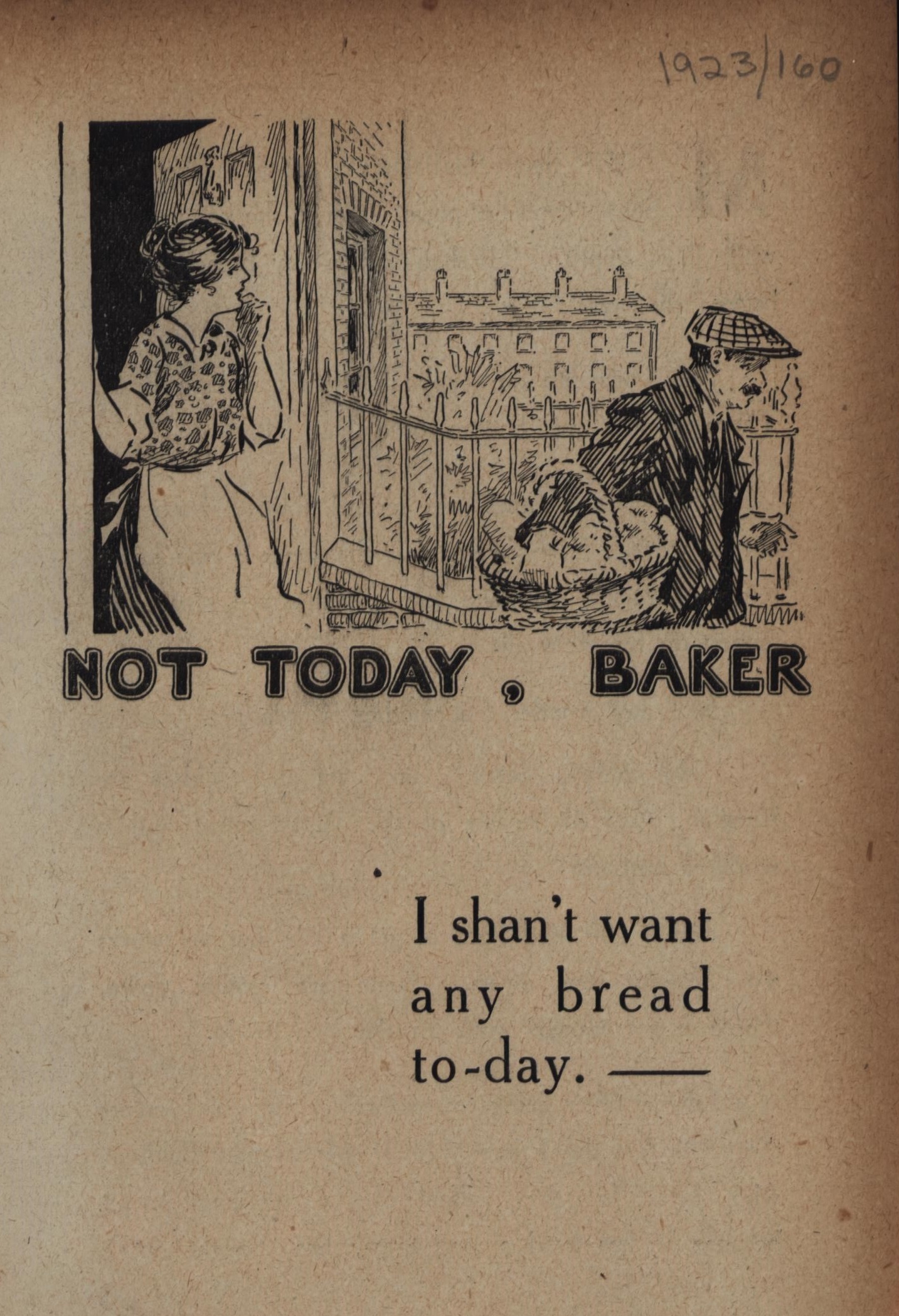 There were also the ‘Over the Garden Wall’ series of leaflets in which a Mrs Brown explains the Conservative Party’s position to her rather less politically informed neighbour, Mrs Jones. She variously explains and extols the virtues of ‘Protection’ and ‘Imperial Preference’ and offers an analysis of the Labour Party position, Conservative plans for social reform by ‘getting things done for the workers’, what a socialist government would mean for Britain should they win the election – contrasting the action of the Conservatives to the ‘talk’ of the Labour Party, and why the Socialists want free trade in preference to protection. 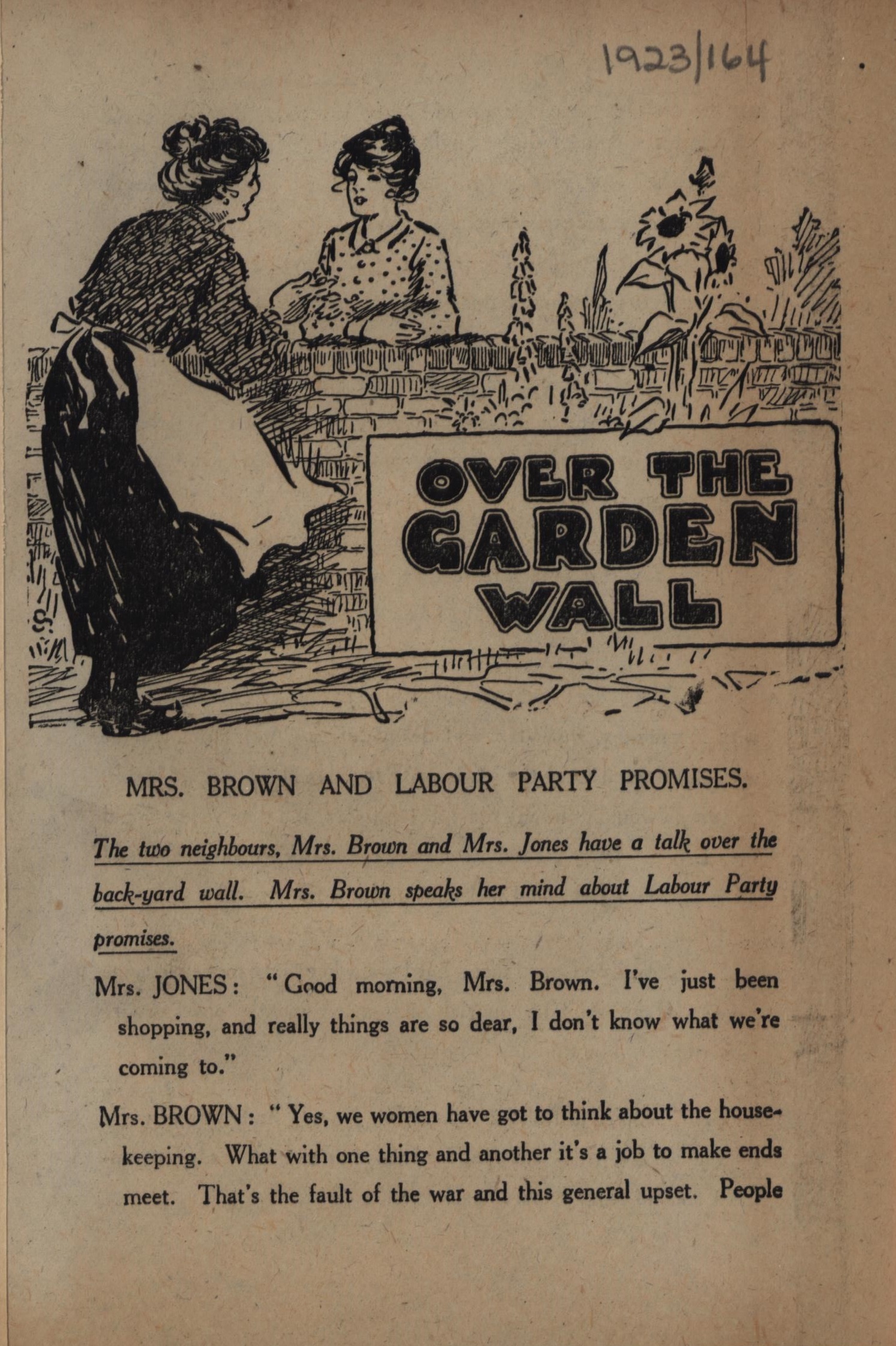 As part of the campaign to win support from working men the Party also highlighted their common ground with the Unions. At the Birmingham Trades Union Congress of 1916 a resolution was passed that “methods should be adopted which will restrict or prevent importation of cheap manufactured goods”, and it was argued that it was the Conservatives who sought to protect British labour in this way [PUB 39/1:192/159]. 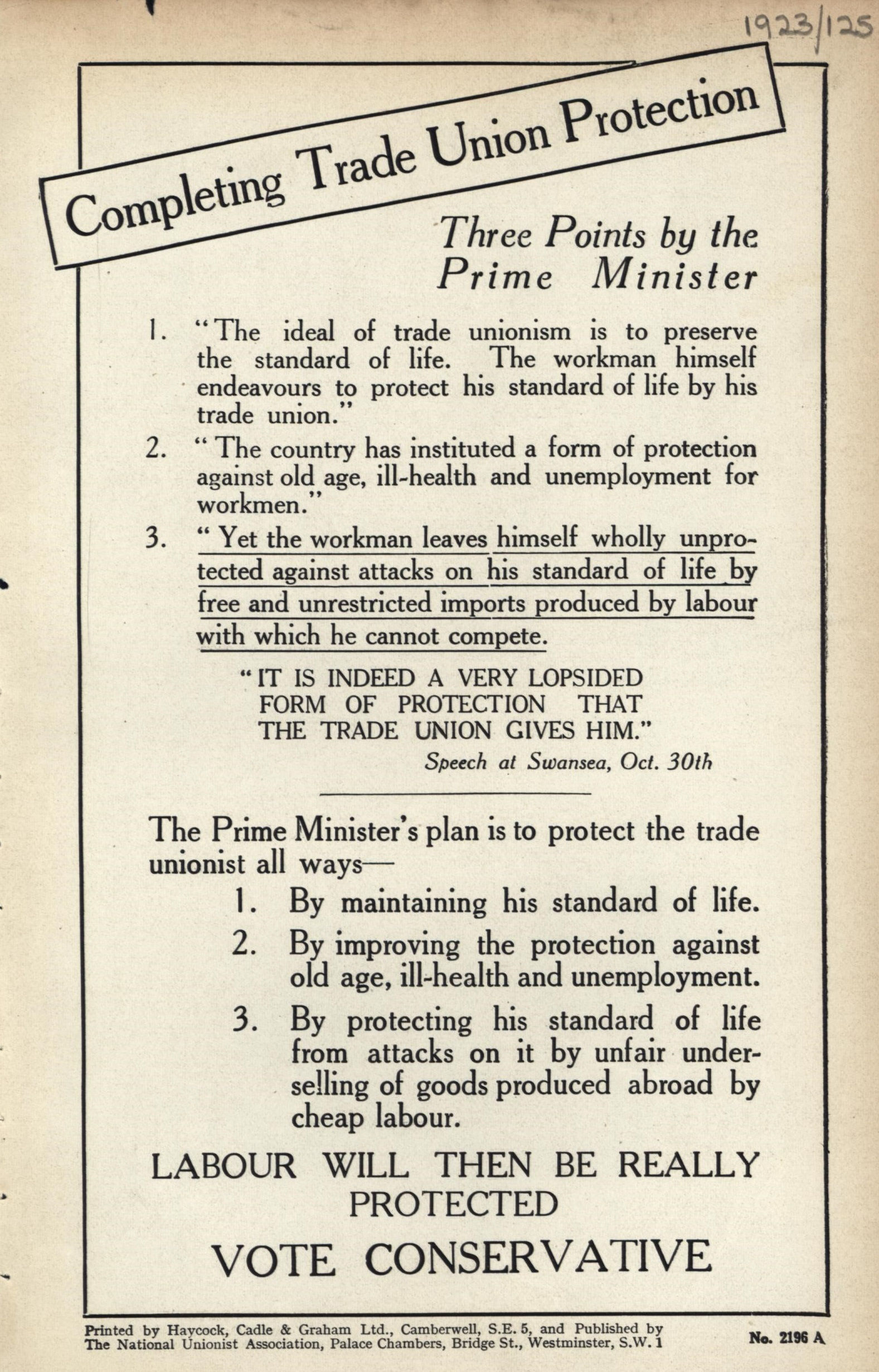 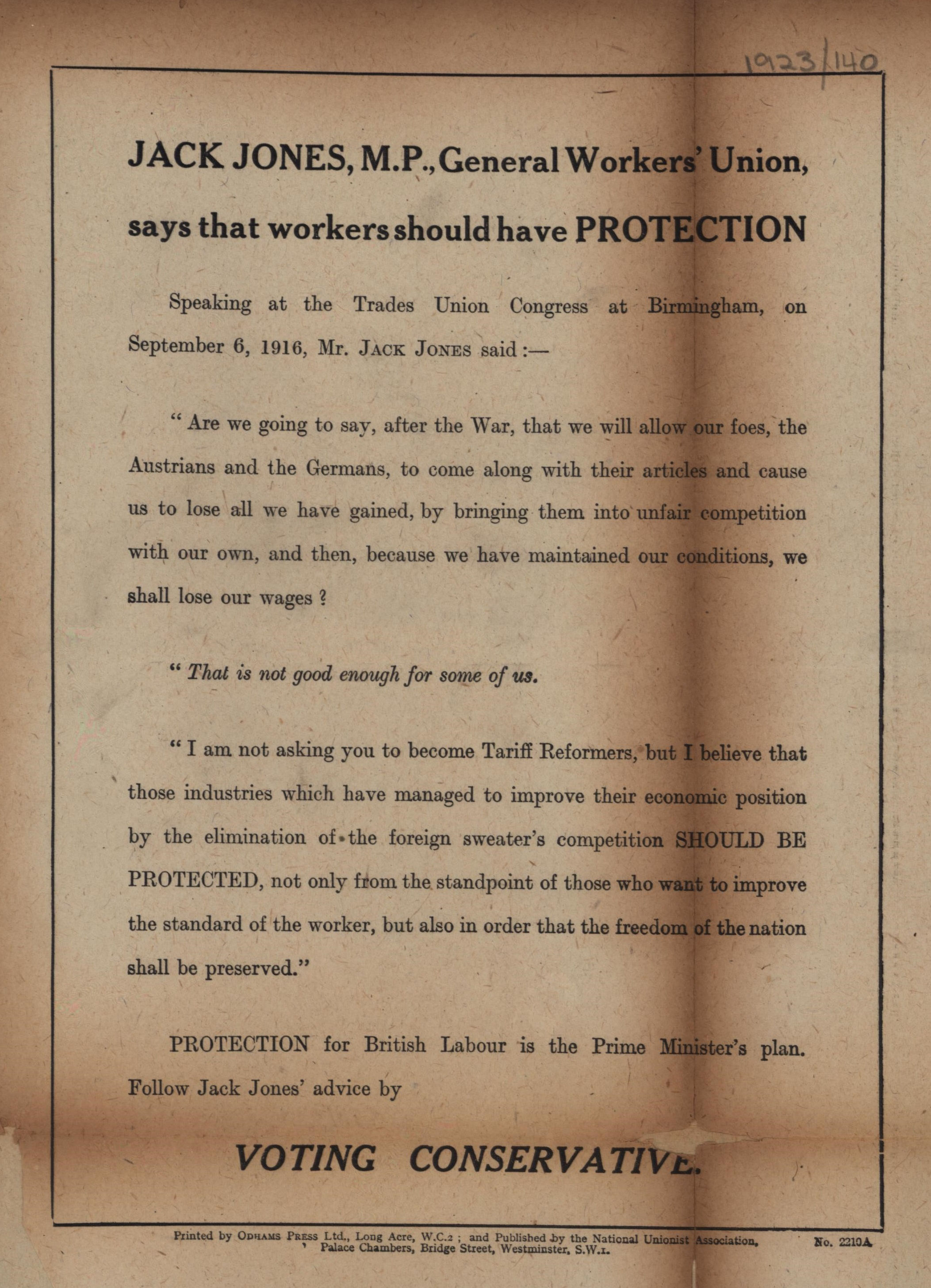 The Conservative Party’s focus on the working classes, whether skilled employees, unemployed young (prospective) workers, Trades Union members or women, was no doubt an attempt to stave off any challenge from the free trader Liberal, but especially Labour, Parties. The mainstay of support for Labour, still a Party arguably in its infancy at this stage, lay in the predominantly working class industrial areas of the country. The Conservative Party was therefore at pains directly to juxtapose their protectionism with free traders, especially the socialist free trader Labour Party: Baldwin’s decision to call his ‘snap’ election in 1923 proved ultimately to be a gamble he and his Party failed to win. Although the Conservatives remained the largest party, they dropped from 344 MPs to 258, and the result was a hung Parliament. Instead, perhaps because neither the Conservatives nor the Liberals relished the prospect of another coalition government, it was the Labour Party which formed the next minority government, albeit with only 191 MPs in the Commons. Although short-lived, this represented a seismic shift in British politics: not only was this the first time that Labour had ever held power, but the 1923 General Election also saw Labour eclipse the Liberals as the second largest party, something from which the Liberals were never to recover.

In his own post-election analysis at the Hotel Cecil in London on 11 February 1924 [PUB 207/1], Baldwin acknowledged that Tariff Reform ought to be shelved “except upon clear evidence that on this matter public opinion was disposed to reconsider its judgement” [p. 5]. On a more positive note, he argued that the Party was more unified after the election than it had been before [p. 3]: He concluded his address [p. 10] with the assertion that

I want to speak of a live progressive united Party that is prepared to go forward with courage and vision into the new age that is dawning upon us […]. 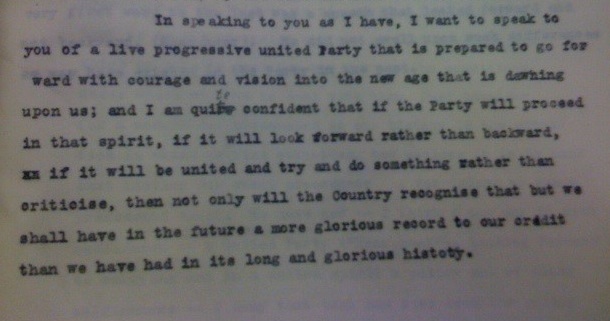 Barely 10 months’ later, with the baggage of Tariff Reform now dropped from the Conservatives’ manifesto, Baldwin led the Conservatives back into government following the landslide victory in the 1924 General Election.