The Archive of Iona and Peter Opie, at first glance, is an archive of professional papers, covering the folklorists’ extensive research on childlore, games and play from the 1950s through to the 1990s. Researchers looking at the history of childhood, and at even at how the ‘world of children’ was observed and documented, will no doubt find a rich resource in the children’s original papers, as well as in the Opies’ working files, their professional correspondence, and the notes for, and drafts of, the Opie publications from The Oxford Dictionary of Nursery Rhymes to The People in the Playground.

What is probably less well known is the fact that the archive also includes a significant proportion of personal papers and correspondence – the personal archive of Peter Opie, covering his own childhood and teenage years, his years at Eton College, his early career as an author, his time serving in the Army, and the early years of starting a family and finding his vocation of collecting books and researching childhood folklore. These personal papers, which focus on the 1930s-1950s, include correspondence with friends and relatives, diaries and scrapbooks, personal documents, photographs and memorabilia. Another sequence comprises the raw material, notes, and drafts for Peter Opie’s early autobiographical books, short stories and other writings. 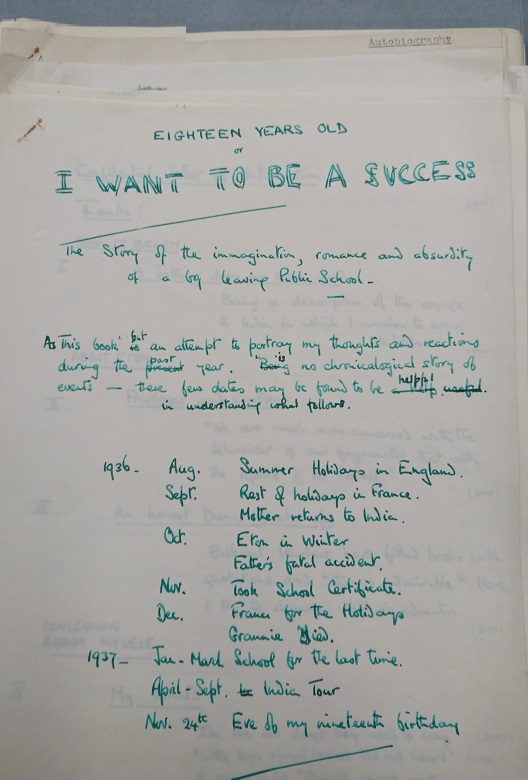 An aspiring writer: Drafts for Peter Opie’s first book ‘I Want To Be A Success’, early 1938.

Peter Opie spent most of his childhood and teenage years at boarding schools in England whilst his parents, Philip Adams Opie, Major of the Royal Army Medical Corps, and wife Margaret, nee Collett-Mason, lived in India. The way of keeping in touch in these days was, of course, corresponding by post, and many of the letters exchanged between mother and son survive in the archive, telling the story of both school life and adolescence in 1930s England and the world of the colonial administration in India. 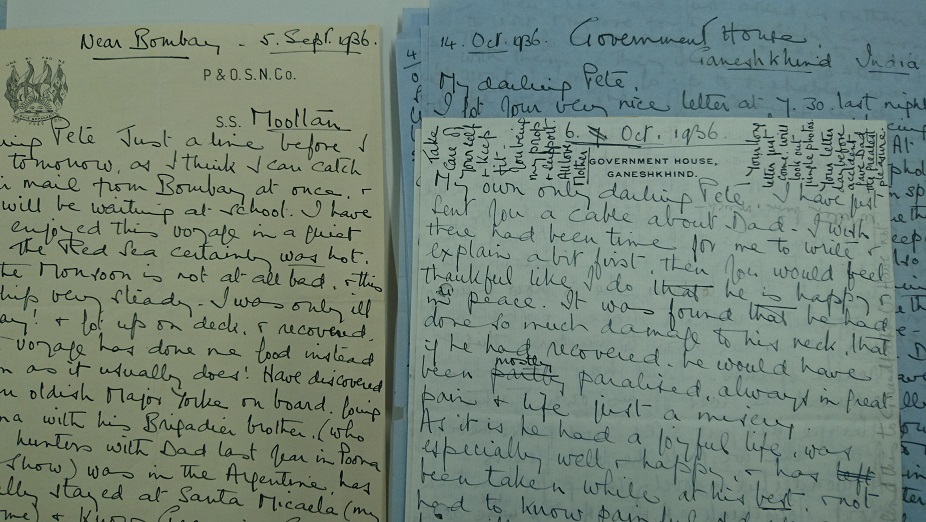 After leaving Eton College in spring 1937, 18-year-old Peter Opie, still unsure which career to pursue, travelled to India for six months – a voyage to an exotic country, as well as (as it seems from his diaries and notes) a journey of self-discovery for young Peter. In his first book, I Want To Be A Success, he vividly recalls these travels, including personal adventures, such as joining a hunting party of the Governor of Bombay (and shooting a panther!), his impressions of daily life in India, and his observations on society and culture. 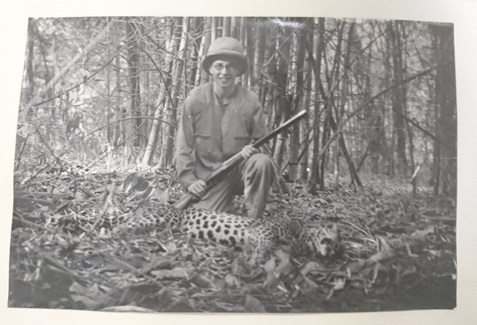 Coming of age, 1930s-style, on a journey to India. The panther hunt left  a lasting impression not only on young Peter Opie… 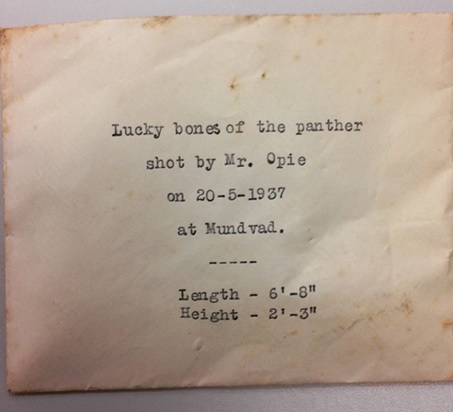 …but also on the Opie Archive.

Panther clavicles (as identified by our GLAM colleagues at Oxford University Museum of Natural History) – not something we find in our archives every day!

After returning from India in autumn 1937, Peter Opie looked more seriously into becoming a writer or journalist. He moved to London, took up a course in photography, and started submitting his texts to magazines and to literary agents. I Want To Be A Success, written during this time, was published in 1939, and a sequel of his autobiographical reflections was in the works – when in September 1939, two weeks after the outbreak of WWII, Peter Opie joined the Army. During his time with the Royal Fusiliers and the Royal Sussex Regiment, he continued to write short stories and observations on life in the army, on war and peace, politics and public opinion. Many of these were published as Having Held The Nettle in 1945. 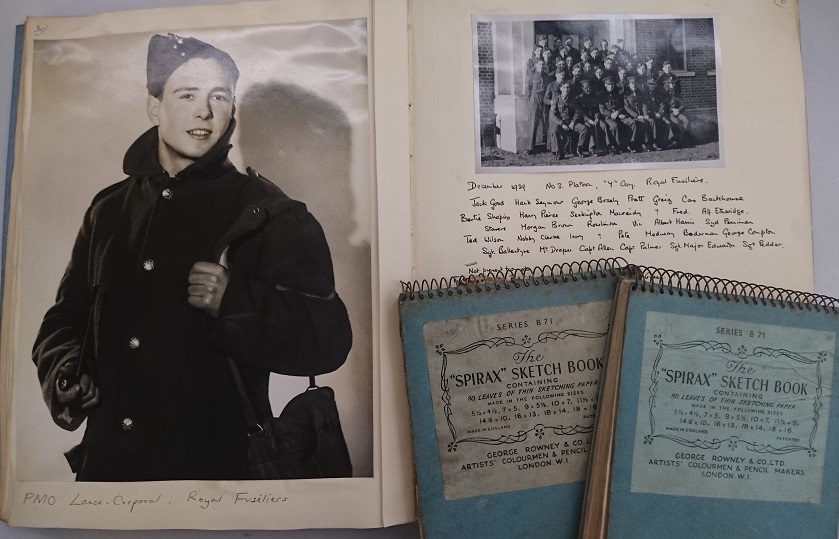 In the Army: Pages from a scrapbook, and notes on army life.

In October 1941, Peter Opie had to leave the army on medical grounds – he had suffered from occasional epileptic fits since childhood, which had now caused a collapse during a military exercise.  He joined the BBC’s Overseas Publicity Department for a brief stint, and then returned to writing, working on short stories and on the idea of bringing a news magazine to the theatre stage. From 1942, he began work on what became The Case of Being A Young Man, personal reflections on early adulthood and on life in wartime Britain – his third book, which won the Wells, Gardner, Darton & Co. ‘Chosen Book’ competition in 1944.

And something else happened in Peter Opie’s life in 1942: one day in spring, a young Sergeant in the Women’s Auxiliary Air Force, stationed at the RAF Fighter Station in Middle Wallop, borrowed I Want To be A Success from a friend. After finishing the book she wrote to the author, curious about the story and the person behind the book. The author wrote back, and this was the beginning not only of a pen friendship, but of a relationship that would last a lifetime – as the WAAF Sergeant was, of course, Iona Archibald, who became ‘Mrs Peter Opie’ in September 1943. 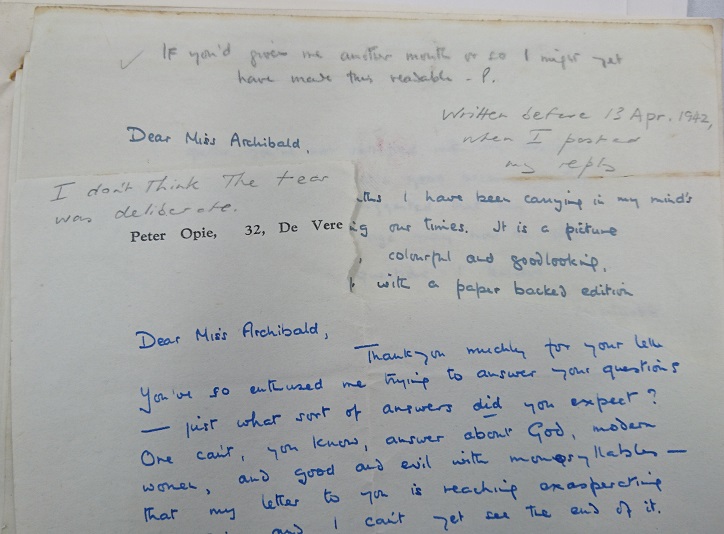 The beginning of ‘the Opies’: Peter Opie’s first letters to Iona Archibald, 1942, with retrospective notes by Iona Opie.

The archive – through letters, personal documents and memorabilia – follows Peter and Iona from their first contact through to marriage and parenthood, providing glimpses into their personal and family life, connections to relatives and friends, and not least their working relationship as researchers and authors.
Whereas the personal papers mainly relate to Peter Opie, Iona Opie’s voice is reflected by the many notes and comments she left with the material before depositing it with the Bodleian Library some years after her husband’s death.

The personal papers in the Opie Archive not only provide biographical context to the Opies’ scholarly work, but are also a fascinating resource in their own right. Please bear with us whilst we sort and catalogue the material (…and with the help of our Bodleian Conservation colleagues, find the right, archival standard packaging for panther bones).
In the meantime, you can find out more about the Opie Archive and the cataloguing project funded by the Wellcome Trust here.

2 thoughts on “Eton College, a journey to India, and wartime Britain: Personal stories from the Opie Archive”