“to call a woman ‘hysterical’ because you have not the knowledge necessary to deny her facts is the last refuge of the unmanly and the coward…I always felt when termed hysterical that I had triumphed because it meant my arguments cannot be met nor my statements denied…” [MS. Hobhouse 25].

A strong-willed, compassionate and at times controversial figure, Emily Hobhouse is best known for her work publicising the conditions in the concentration camps which were set up by the British government to detain predominantly women and children during the Anglo-Boer War (1899-1902). 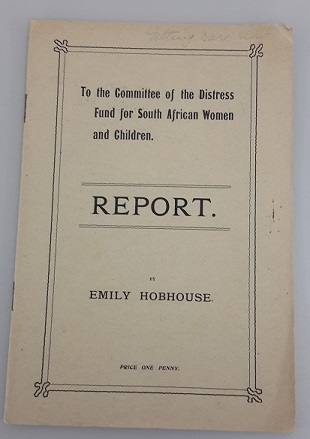 Travelling to South Africa in December 1900, Hobhouse reported on the widespread hunger, death and disease that she encountered there, distributing aid gathered by her Distress Fund for South African Women and Children, and putting pressure on the British government to improve conditions. This led the government to send out a Ladies’ Commission led by Millicent Fawcett, a contemporary but by no means friend of Emily Hobhouse.

Although Hobhouse was not permitted to join the commission, they would confirm her initial reports and make similar recommendations. In 1901 Hobhouse would attempt another visit of the camps, only to be refused permission to disembark, and be deported back to England. In 1905 she returned to South Africa to establish a Home Industries scheme to support rehabilitation, opening schools for spinning, weaving and lace making for local girls.

“a war is not only wrong in itself, but a crude mistake” [MS. Hobhouse 10]

A committed pacifist, Hobhouse travelled to Germany and Belgium during World War One to investigate conditions and meet with the German foreign minister, an act which to some put her on the wrong side of public opinion. Following the armistice, Hobhouse continued her commitment to relief work, and in 1919 set up a local relief fund in Leipzig, where she was honoured and awarded the German Red Cross decoration of second class.

The fascinating collection includes letters, diaries, and her own extensive writings, which reveal her unyielding dedication to her work. The collection also contains papers of her brother, Leonard Trelawny Hobhouse (1864-1929), a social philosopher and journalist.

While she is an often forgotten figure in British history, Emily Hobhouse is still remembered as a heroine in South Africa, where her ashes are buried in the Women’s Monument at Bloemfontein. On her death, Mahatma Gandhi wrote the following memorial: 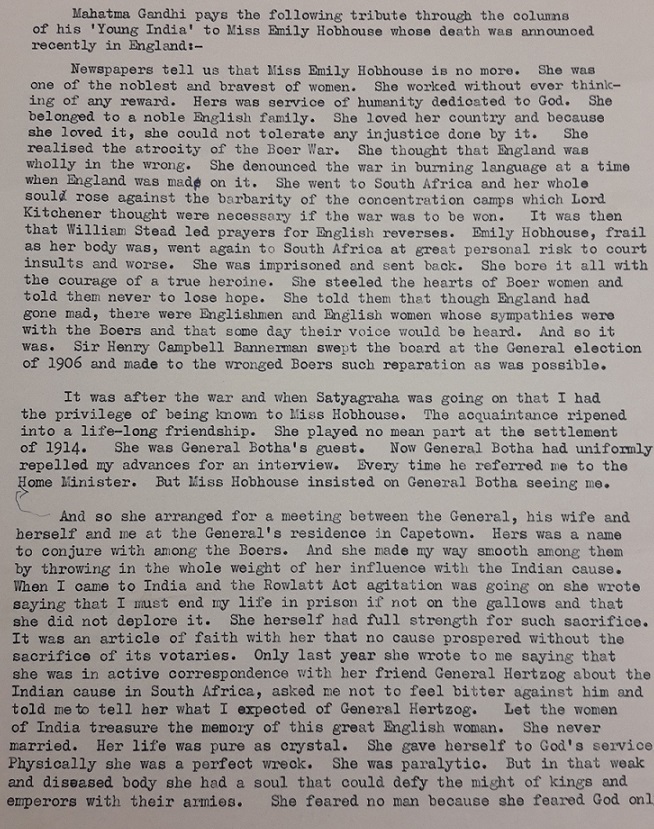 The Archive of Emily Hobhouse is now available to readers in the Weston Library. The catalogue can be accessed here.

A selection of Emily Hobhouse’s own writings are now available to view online.