As an Archives Assistant spending the next twelve months helping to catalogue the Oxfam Archive, I probably shouldn’t admit how woefully ignorant I was of Oxfam before I started. I knew their shops sold cheap books and nice Christmas cards. I knew you could buy someone a goat or a toilet for Christmas, and that this goat or toilet would go to someone who lived somewhere without a sewage system or a supermarket selling pasteurized milk. But beyond this, I’d never really stopped to think who ‘Oxfam’ were and what they meant. It came as a surprise that ‘Oxfam’ wasn’t just a made-up word but came from Oxford Committee for Famine Relief, and that a charity which was born in one small city has spread its offices and infrastructure across the globe. I’ve learnt a lot in the two months since I started. But Oxfam’s 75th birthday party, held in Oxford’s town hall on Friday 6th October, taught me a lot more. 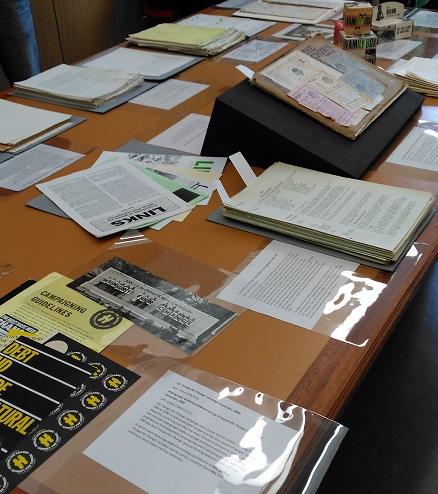 At the Bodleian we were involved with preparations for the 75th anniversary in a low-key way, answering enquiries from Oxfam staff regarding photographs which would be used in exhibitions and slideshow presentations. Between the 4th and the 6th October there were also opportunities for Oxfam staff and volunteers to view some of the highlights of the Oxfam archive in the Bodleian, and this proved a learning experience for me as well. Through objects such as a scrapbook documenting fundraising and a damp-gnawed but still-legible gift-shop cashbook from 1948-9, I realised the importance of innovatory and motivated figures like Robert Castle and Joe Mitty, who respectively established the first permanent Oxfam shop and helped make the charity-shop phenomenon what it is today. A particularly memorable entry in the cashbook was simply ‘Dog’, which sold for 5 shillings – we presume the dog was ornamental, especially as an ‘Elephant’ was also sold at around the same time! 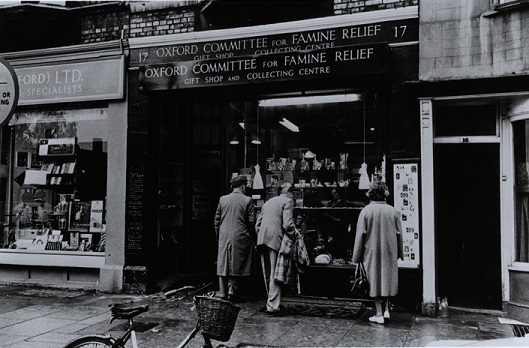 The anniversary celebrations themselves took place on Friday 6th October in Oxford’s Town Hall. We were treated to cake and tea in the Assembly Room, and then moved into the ornate Main Hall where the Oxfam choir sung us into our seats. The full hall made me realise not only the importance of Oxfam as a UK employer, but also as a social institution which generations of people have grown up with. Many of the volunteers were elderly, but a gurgling baby at the back of the hall indicated that the Oxfamily spans all ages.

My job is to catalogue Oxfam’s project files, bundles of correspondence, receipts and reports which document how development work plays out on the ground. This is what Stan Thekaekara, founder-director of trade model ‘Just Change’ and one of the evening’s speakers, would call the ‘worm’s eye view’. I was much less aware of the ‘bird’s-eye view’, the need for an overarching vision and policy and the tension that can result between the bird and the worm, between the decision-makers at home and the boots on the ground. This was something discussed by the panel hosted by Duncan Green, strategic advisor at Oxfam GB. The panellists debated the need to reorient the global economic system away from exponential growth and a capitalistic zero sum game, but also the importance of listening to the communities worst-affected by this system and providing them with the knowledge that could help improve their lives. 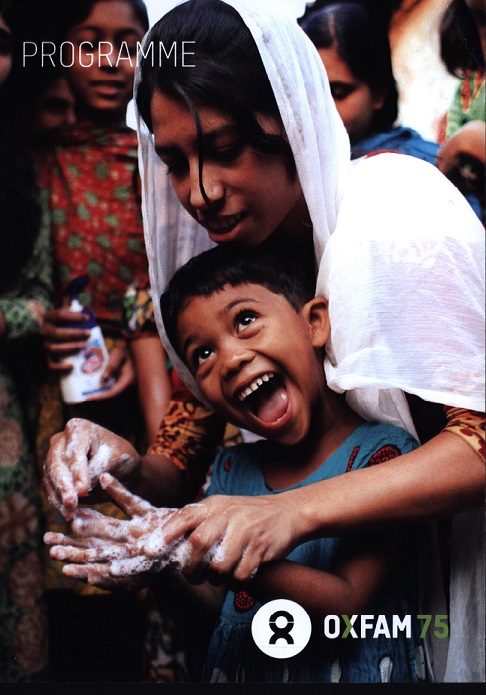 the programme for the evening’s events

In a discussion on the future of Oxfam, Mark Goldring (Oxfam GB’s Chief Executive) suggested this focus on communities was already being embodied by Oxfam International, the worldwide confederation of Oxfam affiliates. Oxfam International Executive Director Winne Byanyima was optimistic as she announced that Oxfam International’s headquarters would shortly be moving to Nairobi, and the celebratory talks concluded with reiterations of Oxfam’s commitment to end poverty.

While the optimism and passion of the speakers was inspiring, I couldn’t help but notice the tragic irony of the fact that, twenty-five years ago, Oxfam’s 50th anniversary celebrations were overshadowed by the influx of Rohingya Muslims into Bangladesh, and that 2017 has witnessed renewed attacks and allegations of genocide by the Myanmar authorities. Despite Oxfam’s energy and determination, I can’t help but think that, while human hatred continues to fuel governments, human suffering will not be easy to uproot.