The library recently acquired a little Gallen almanac of 1667. This work, itsel

f a rare book (we have traced a handful of Gallen almanacs in the Bodleian, and none for 1667), has become a unique manuscript as it contains a diary of Jeffrey (or Jefferay) Boys of Betteshanger, Kent for the year 1667. The catalogue has just been published online. Although the diary covers only 12 pages (one per month), it is of considerable interest as a record of Restoration London. In the words of the bookseller  Samuel Gedge, who identified the author and the significance of the diary, the diarist “offers a masterclass in Restoration dandyism: gambling, socialising, drinking, dancing and theatregoing”. 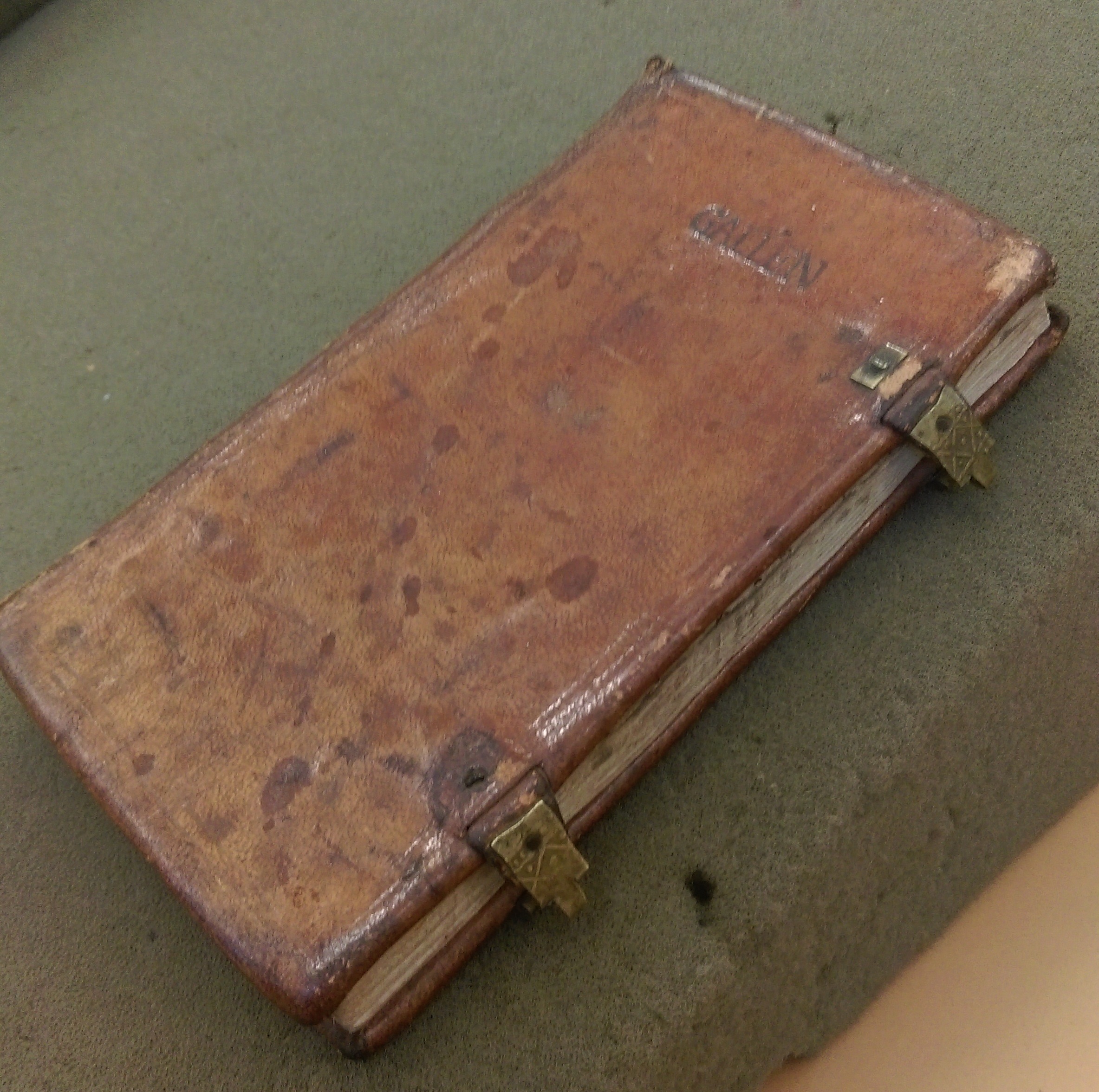 Jeffrey Boys (1643-1703) was a young lawyer at Gray’s Inn, one of many sons of John Boys (d. 1678), possessor of the manor of Betteshanger in Kent. John Boys was married three times, and the numerous references to brothers, sisters and cousins in the diary refer to step-relatives and brothers and sisters-in-law as well as full siblings, and all can be traced in pedigrees of the Boys family and John Boys’s will held in the National Archives. Jeffrey’s mother and father make a brief appearance in the diary when ‘Father & Mother Let’ come to London. Jeffrey’s mother was named Letitia.

The most extraordinary aspect of the diary however is Boys’s meetings with the female playwright Aphra Behn, with whom he is clearly acquainted. Aphra goes by the name of ‘Astrea’, and her identity might not have been established but for the fortunate discovery in 1930 of another Jeffrey Boys diary of 1671. Astrea was apparently a name Aphra Behn adopted when she was a spy in Antwerp. Sadly, the whereabouts of the original diary is not presently known, but the discoverer, though not recording where he saw it, wrote it up in Notes and Queries, noting that Boys records that he saw Astrea’s play the Forc’d Marriage, and then that ‘Astraea’s boy brought me her play the Amorous Prince’. 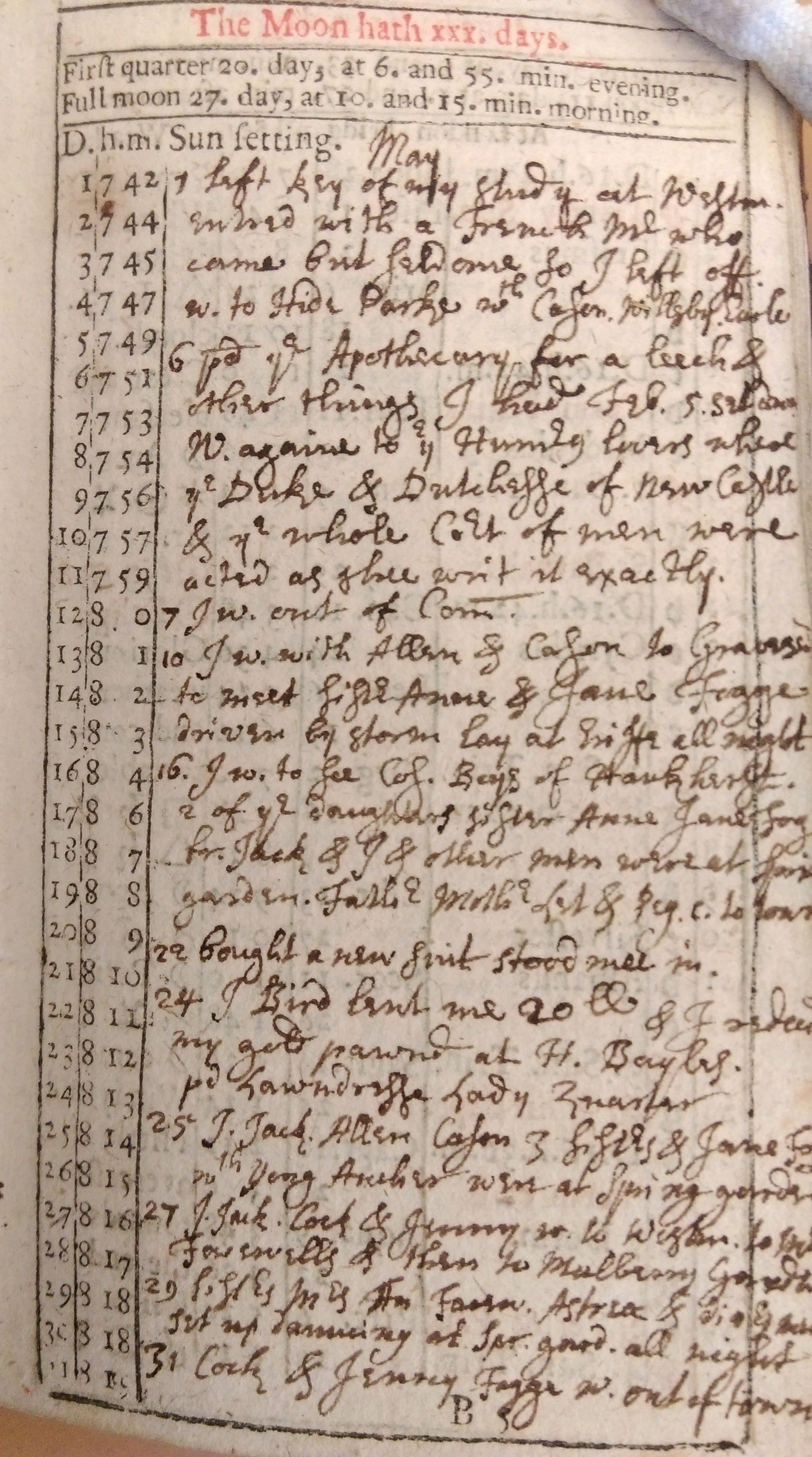 The 1667 diary shows that Jeffrey Boys’s connection with Aphra Behn was more intimate, and went back further than could be discovered from the the 1671 diary. She makes her first of five appearances in Boys’s 1667 diary on 29 May when Boys, his sister, Astrea and ‘divers men set up dauncing at Spr[ing] gard[en] all night’. The date of this first entry is noteworthy because it is known from other sources that Aphra Behn had returned from her spying mission to Antwerp earlier that month (see her entry in the Dictionary of National Biography). It is clear from this entry that Boys already knew Astrea, and as she is treated in the same way as all his other friends and relatives mentioned in the diary, it is likely that they had known one another a long time.

The diary has numerous interesting references to life in Restoration London. On 14-15 Jan 1667 Boys records attendance at various plays. He saw the ‘Indian Queen’ (‘it not having been acted in a long time’) and its companion the ‘Indian Emperor’ performed over two days, ‘the whole Court almost except th[ei]r Maj[est]ies being there’. This was Thomas Killigrew’s production, the man who was later to stage Behn’s plays and who was also connected with her spying activies. In February 1667 Boys helped to set up an Anatomy Club, missing its first meeting as he was watching Spanish rope dancers. At a later meeting he saw ‘a dog well anatomized’. 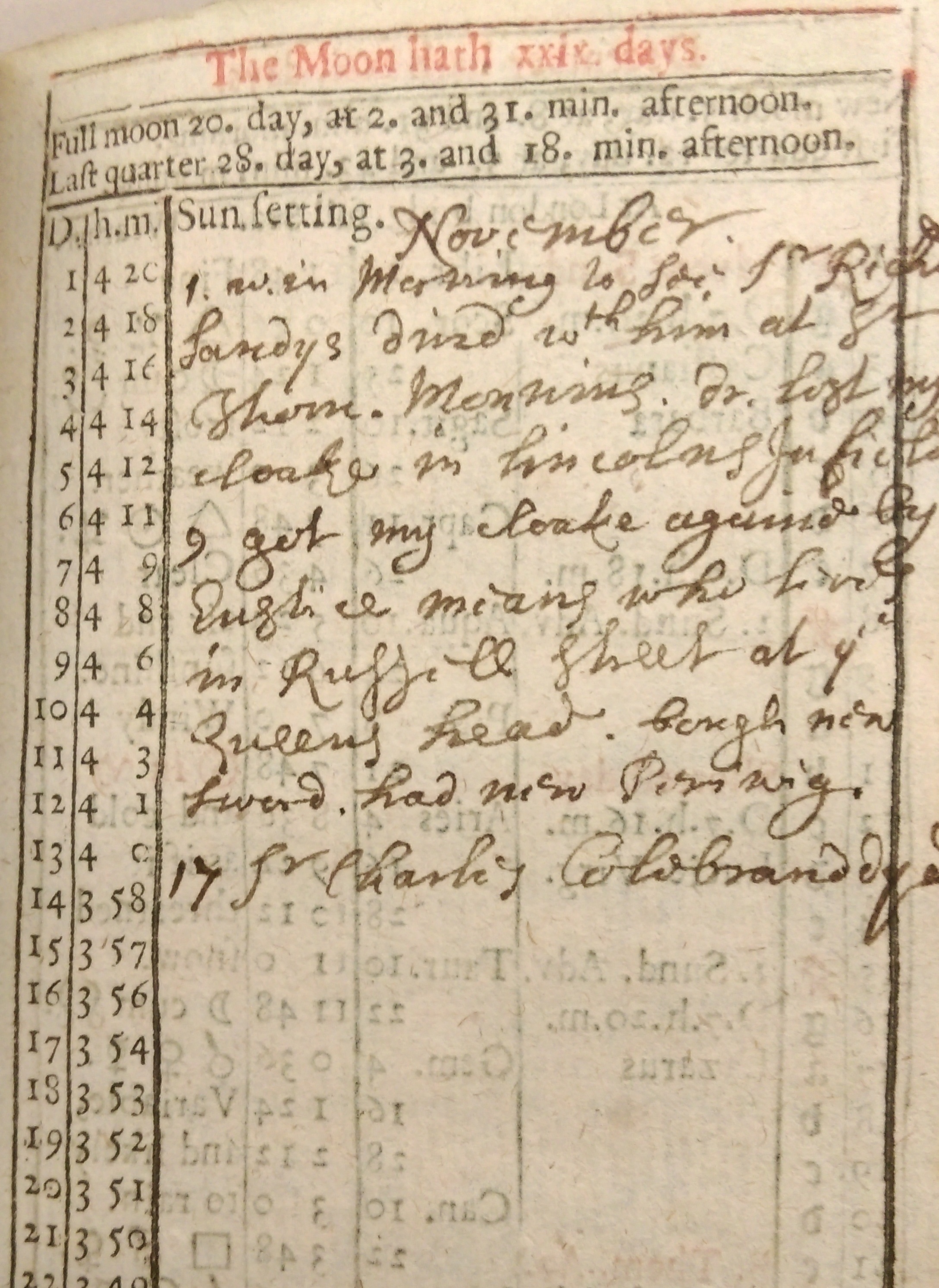 November  ….lost my cloake in Lincolns In field  … bought new sword [he lost his old one]. had new Periwig.

Boys also attended the ‘Humorous Lovers’ by the ‘Duchesse of Newcastle’ exactly, he says ‘as shee writ it’. It is supposed that the Duke of Newcastle actually wrote the play, but Pepys also saw it at the same time, and he too believed it to have been written by the Duchess.

Boys seems to be following Pepys around. He and his companions saw a ‘riding of Skimington’ on 10 June 1667 in Greenwich. This was a form of community retribution meted out on people deemed to be acting anti-socially, and Pepys witnessed the very same incident in Greenwich on the same day:

[from Pepys Diary 10 June 1667] ‘…in the afternoon took boat and down to Greenwich, where I find the stairs full of people, there being a great riding there to-day for a man, the constable of the town, whose wife beat him.’

The diary gives an interesting picture of places of entertainment in post-Fire London. Several taverns are mentioned, the favourite being the Bacchus, where once again we find Boys and others dancing all night with Astrea in December 1667. In October Boys was up all night again, this time at ‘La Frouns’ (or possibly La Trouns – if anyone has information about this institution, please let us know). Among his companions on this occasion were ‘Ld Bellamounts daughters Lady Frances and Persiana’. Frances Bard, daughter of the Earl of Bellomont, was Prince Rupert’s mistress and mother of his natural son Dudley.  According to some accounts, the relationship ended in 1667.

At the end of the volume, Boys has copied out the steps for various country dances – perhaps he and Aphra Behn tried a few of them! 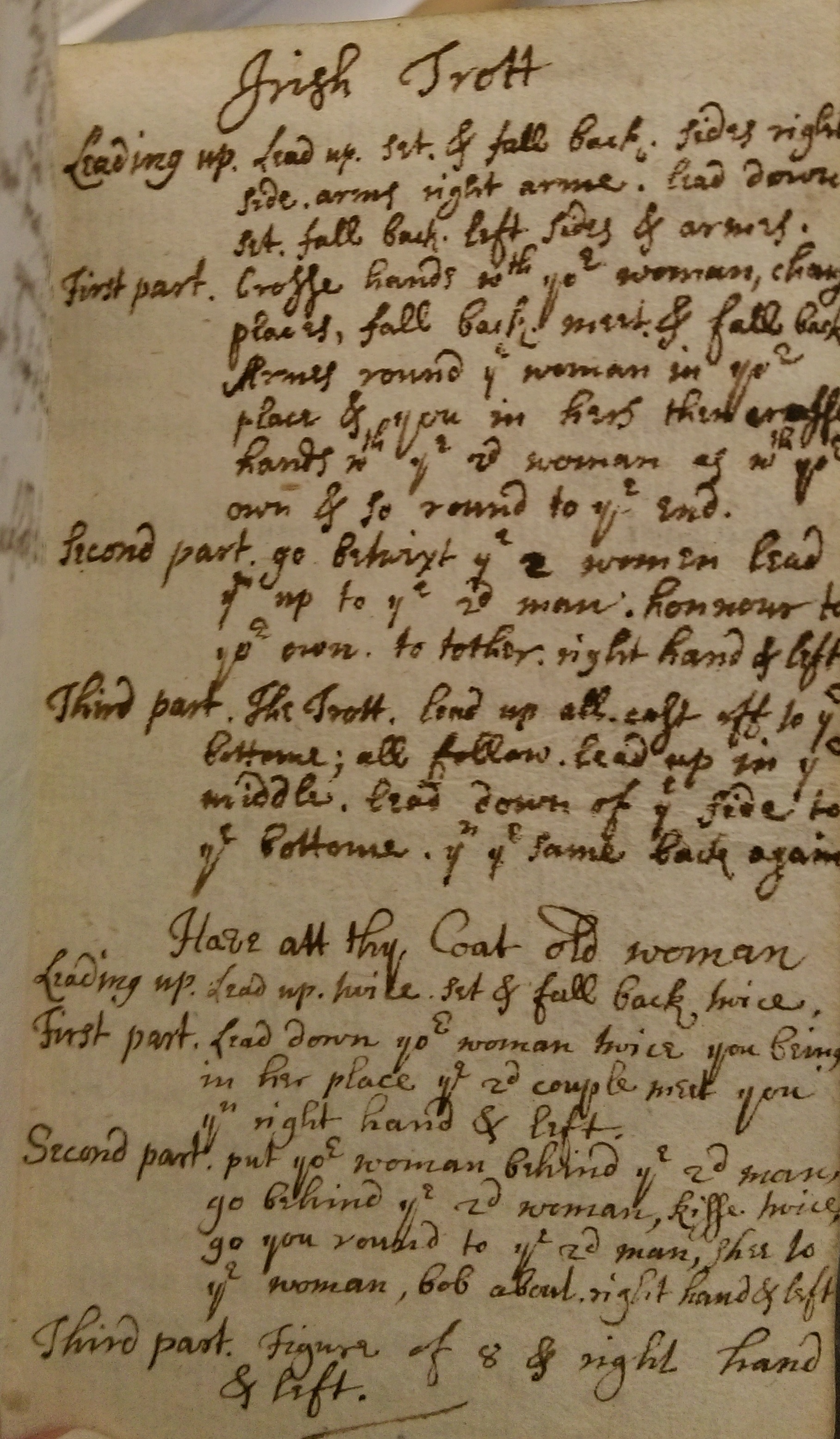