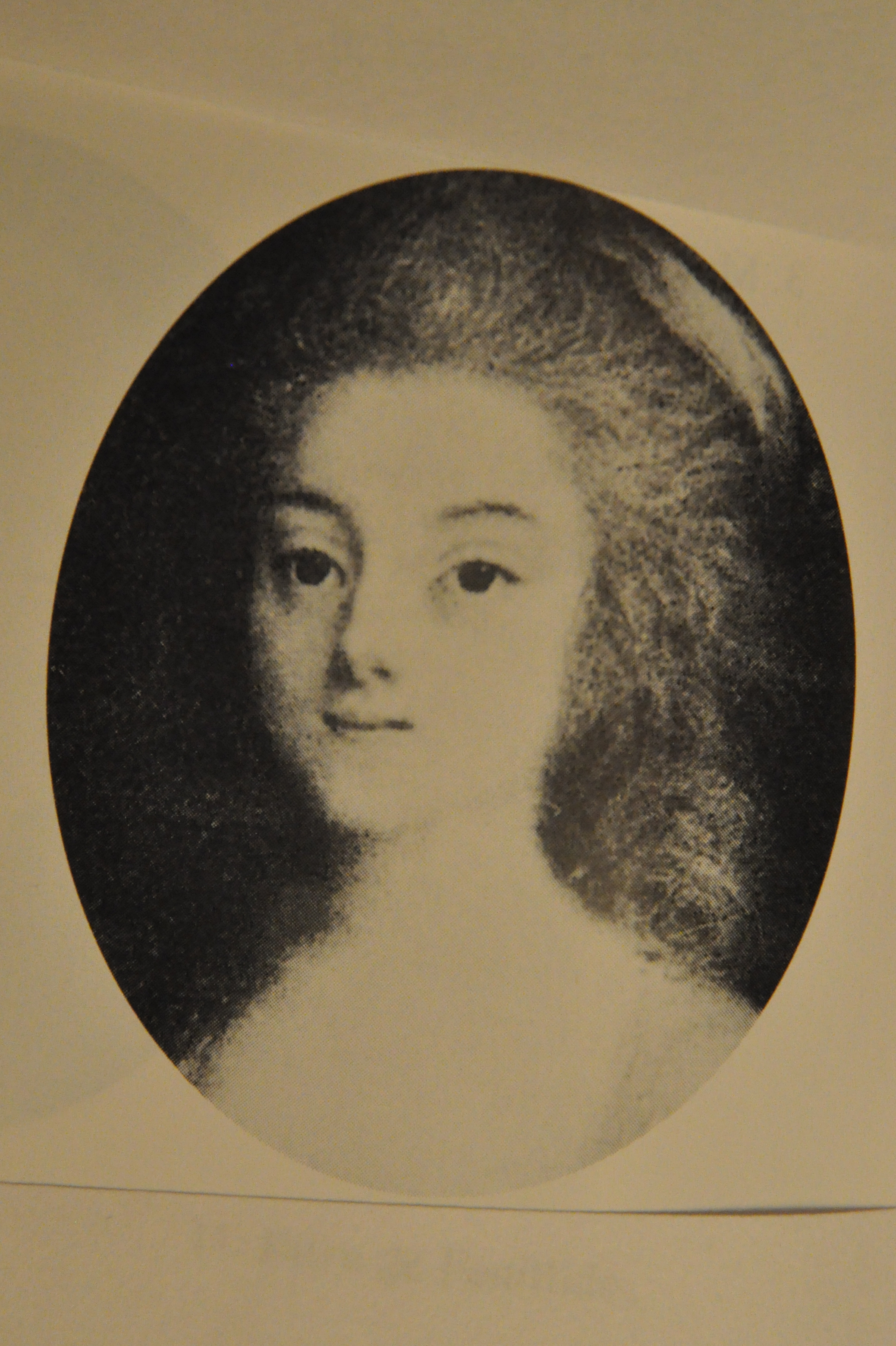 Visitors to the Jane Austen exhibition (Which Jane Austen?) will have seen a small diary whose anonymous author attended a party in Paris where both Jane Austen’s aunt and cousin were present.

Although the diary has been in the Bodleian since 1945, the Jane Austen connection had not been noticed until I stumbled across it in 2015. In June of that year a number of History and English students came to a workshop in the Weston Library to help us discover the authors of some anonymous manuscript travel diaries in Bodleian collections. We called the workshop ‘Travelling Incognito?’ Archivists in Special Collections surveyed the diaries briefly before the workshop to assess them for readability, condition and potential research interest. During this process, a page in one of the diaries, MS. Eng. misc. e. 250, caught my attention. The catalogue entry for the diary is brief: ‘Journal of a tour in Germany, Belgium and the Netherlands, late 18th cent. 60 leaves; marbled wrappers.’ The author mostly describes towns, houses and gardens he visits, and perhaps apart from his visit to the Royal Court at Versailles where he saw Marie Antoinette, there is nothing especially remarkable about the diary. No year is mentioned, but we can date it to 1786 from the correlation of days and months and some references to recent events. One or two pages for no apparent reason are written in French, and it was on one of these pages (fol. 19v ) that I noticed some interesting names in reference to a dinner in Paris on 17 June. The description of the dinner reads as follows:

[We dined today at Mr Pattle’s, where were Doctor Geary, two Englishwomen, Madame Hancock and her daughter, a Curé, Madame Villette and Mr Pattle, whom we found was very unwell,  but he received us with great sincerity, and recounted to us numerous stories. Madame Hancock was in the Indies, and knew well Mr Sumner, Madame Yorke, the Birch family etc. The Doctor told me that her daughter was Mr Hastings’s …] 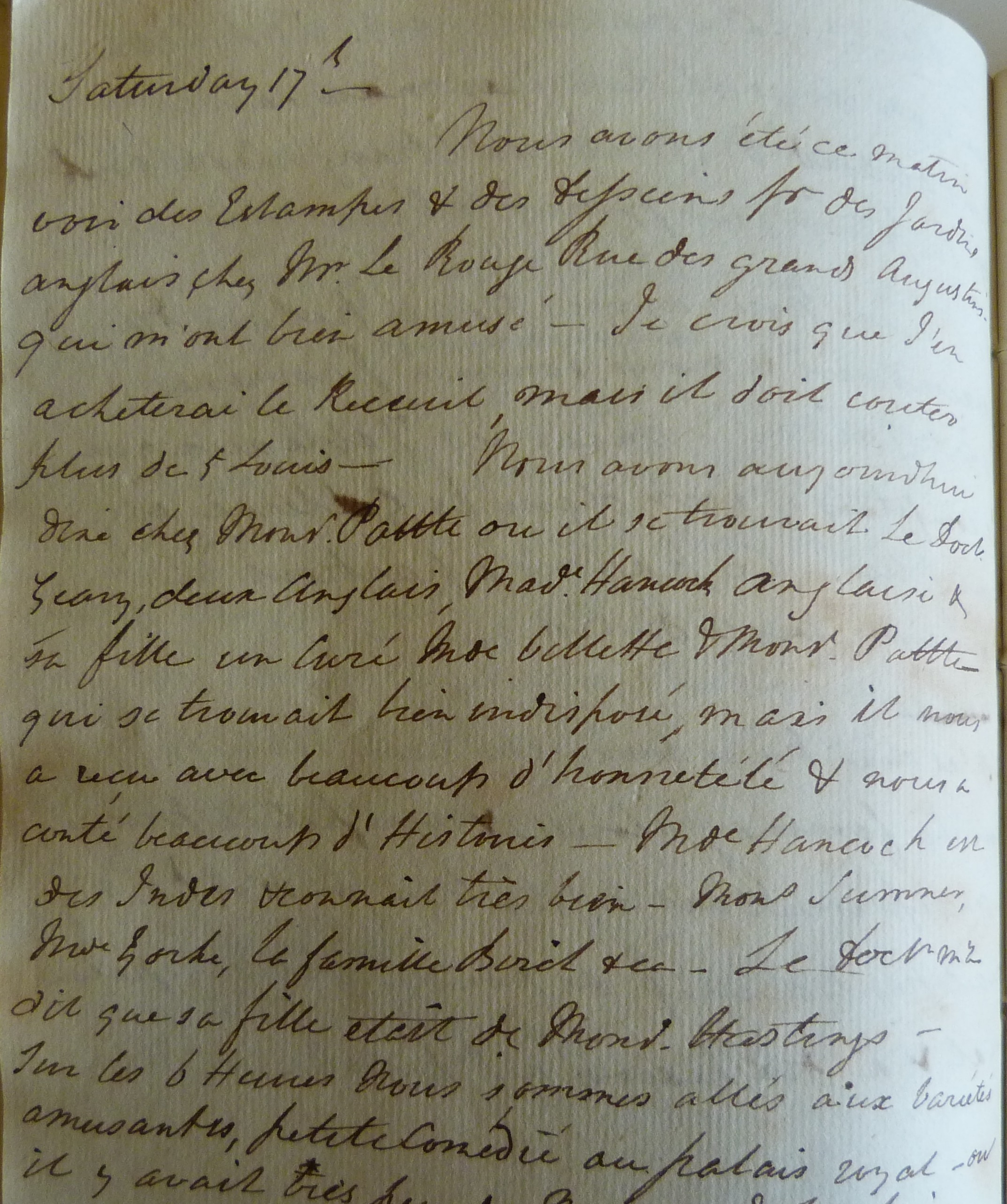 What are we to make of this? At first I was struck by the author’s apparent interest in India. The fact that Madame Hancock had been ‘en des Indes’, and had known various people out there, was clearly of interest to the author who may well have had connections with India and the East India Company, and appears to have had mutual acquaintances there with Mrs Hancock. The name of the host, Pattle, was sufficiently unusual to be worth an internet search, so I tried my luck and put the names Pattle, Hancock, Sumner, Yorke and Birch into a search engine together with India. The results were encouraging. One ‘hit’ was on a document created by the British Library, People and Places.  A guide to materials relating to India at the British Library Western Manuscripts Collections.  This guide revealed that one Thomas Pattle had been a director of the East India Company; that Richard Sumner was also an East India Company official, and that Warren Hastings, as Governor-General of India, had corresponded with him. The names Yorke and Birch are also listed in an Indian context, but the name that really stood out was that of ‘Tisoe Saul Hancock’, Surgeon at Fort William (Bengal), especially as his name came up in the context of letters he had written to Warren Hastings. Also mentioned in the British Library Guide was ‘Mrs Hancock’. Copies of Mr Hancock’s letters to his wife and daughter, and his will, are among the papers of Sir Warren Hastings. The significance of all this is that Tysoe Hancock’s wife was Philadelphia Hancock, nee Austen. She was Jane Austen’s aunt. 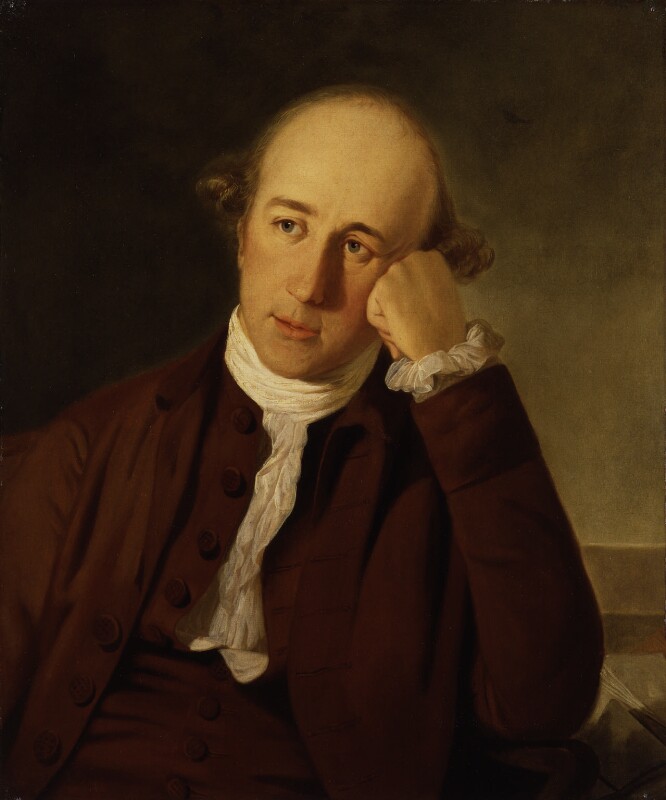 So now let us return to the dinner at Mr Pattle’s house in Paris in June 1786. Those knowledgeable about the history of Jane Austen’s family will have noted straightaway that the ‘fille’ of Mrs Hancock, also present at the dinner, must be Eliza. And of course, Eliza and her mother were in France in 1786 because Eliza had married a French Army Captain, Jean-François Capot de Feuillide. Jean-François made the mistake of making (possibly bogus) claims to aristocracy and ended up a victim of the guillotine, by which time the Hancocks had returned to England. Eliza was thus Jane Austen’s cousin, and Jane knew her well. She was 14 years older than Jane, and according to the article on Jane in the Oxford Dictionary of National Biography, Eliza was ‘a frequent visitor to Steventon and a powerful influence on her cousins.’ Her vivacious and witty nature is thought to be reflected in the character of Mary Crawford in Mansfield Park, published shortly after Eliza’s death in 1813. By then, Eliza had married Jane’s brother Henry, so that she was Jane’s sister-in-law as well as her first cousin. The most interesting thing about the passage mentioning the dinner in Paris is the apparent reference to a story circulating at the time, that Eliza was the natural daughter of Warren Hastings (stated in the rather bald French, ‘sa fille etait de Mons r Hastings’). Whatever the truth or otherwise of the rumours surrounding her birth, and this subject remains controversial among Austen scholars, it is very interesting to see that the story was apparently circulating in Paris in 1786, even among those very close to Mrs Hancock and her daughter.

None of this has helped us to identify the author of MS. Eng. misc. e. 250, but it does suggest a network that might be pursued. And during the course of the Travelling Incognito workshop, the student assigned to work on this diary discovered that the author had visited Mr Pattle on 13 June. His house was in Place Royale, and the author delivered to him ‘our letters and parcels’, one of which was from Mr Hastings, thanking Mr Pattle for his offer of his services ‘on the trial’. So it certainly would appear that there is some connection between the author and Warren Hastings, and that perhaps some official business took him to Mr Pattle’s house.  Warren Hastings’s impeachment for alleged corruption in India began in 1787 and he was acquitted after a trial that lasted until 1795.

It was during this first visit that Mr Pattle invited the author to dine on the 17th. He describes Mr Pattle as a 76-year-old man with one eye. This identifies Mr Pattle as Thomas Pattle of Paris, whose will of 1788 is among the Prerogative Court of Canterbury records held at the National Archives. Mrs Maria Villette, presumably the Madame Villette noted in the diary, was a major beneficiary, in recognition of the care she had taken of Pattle and his affairs.  Julia Margaret Cameron, nee Pattle, the noted photographer and great aunt of Virginia Woolf, was Thomas Pattle’s great granddaughter.

This takes us some way from the brief entry in the anonymous diary however. Of more interest in this context is a reference to the same Thomas Pattle and his Paris residence in the correspondence of Jeremy Bentham (see  The Correspondence of Jeremy Bentham, Electronic Edition, ed. Sprigge et. al., InteLex Corp., Charlottesville, Virginia, U.S.A., 2000). Just a year before the anonymous diarist met Thomas Pattle and the Hancocks in Paris, on 17 August 1785, Jeremy Bentham wrote a letter to his father, Jeremiah, on 17 August 1785:

“I scribble in haste from Mr. Pattle’s Country house at Argenteuil, formerly the House of the Marquis du Chatelet, and Residence of Voltaire, present Mrs. Villette, Mr. Pattle, Captn and Mrs. Brook and Mr. Roger Metcalfe… .”

Later in the letter he adds:

“I met your Friend Dr. Keary here on Sunday who made the most affectionate Enquiries after you.”

It may not be significant, but it was a ‘Dr Geary’ who confided to the anonymous diarist the story of Eliza Hancock’s alleged origins. The editors of the Bentham correspondence were not able to identify Dr Keary. Could our diarist have mispelt his name? The editors did have something to say about Thomas Pattle however, noting that Samuel Bentham, Jeremy’s brother,  had stayed with a Mr Pattle at Paris in 1775.

In September 1785 Jeremy Bentham wrote to Jeremiah from Florence, ending a long letter with the following:

“I don’t know that I saw Lady Craven. I had a pretence to call on her from having seen her beautiful little boy, Keppel at Mr. Pattle’s (Mrs. Villette and she are great friends) … .”

This brings us once more into the Jane Austen orbit, for she had connections with the Cravens through her great friend Martha Lloyd, and through Thomas Fowle who was betrothed to Jane’s sister Cassandra before his untimely death in the West Indies, both of whom were descended from a junior branch of the Craven family. The Countess Craven in Jane’s day, daughter in-law- of the Lady Craven  mentioned by Bentham, read and offered her opinions of some of Jane Austen’s novels, as indeed did Warren Hastings (see footnotes in the The Letters of Jane Austen  published by OUP, 1995; online database version published by InteLex Corp., Charlottesville, 2004).

The diary remains on display in the Which Jane Austen? exhibition in the Weston Library until 29 October.

4 thoughts on “A Brief Encounter with Jane Austen’s Aunt and Cousin, Paris 1786”