The second edition of the catalogue of the Braun Family Archive is now available here.

More than 50 boxes – MSS. Braun 168-221 – have been added since the first catalogue was published in February 2015. In addition to the papers of, and collected by, Thomas Braun and his parents Konrad and Hildburg Braun, the archive now includes a collection of family verse and writings, as well as correspondence, personal documents, writings, memorabilia and photographs of Gerhard Braun, his wife Anneliese and daughter Ruth. 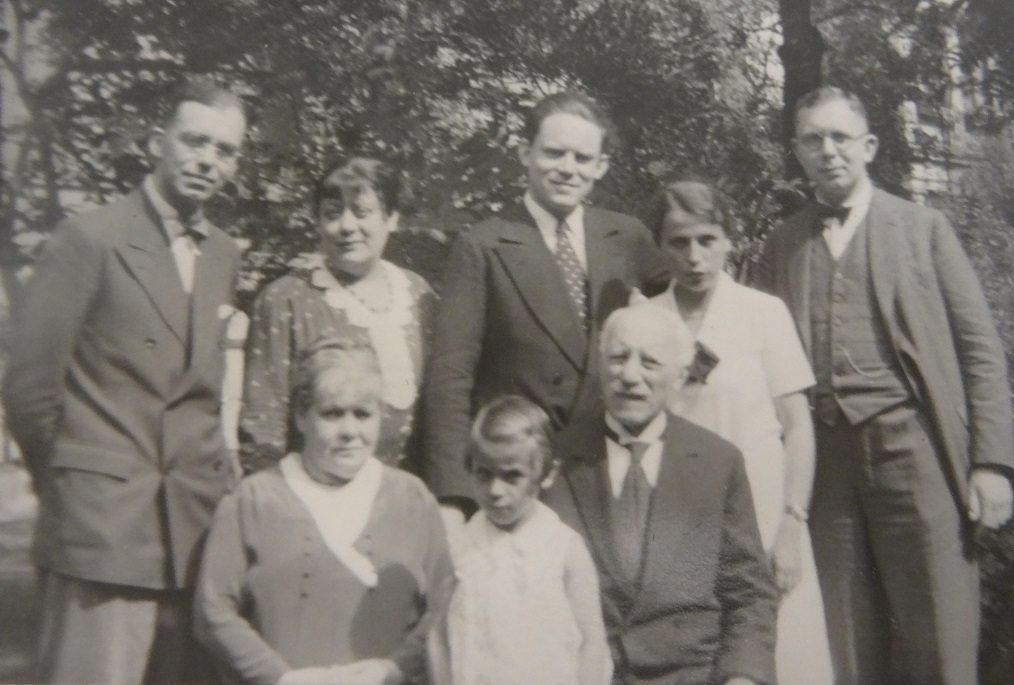 The Friedmann-Brauns, c. 1931: Gertrud and Felix Friedmann-Braun with Ruth, at the back Konrad, Hildegard, Johannes, Anneliese and Gerhard Braun. – Photo: Braun Family Archive

Due to the Friedmann-Brauns’ Jewish ancestry, the family faced discrimination and persecution under the Nazi regime. After losing his posts in the public health system and seeing his previously successful practice limited to private patients and the to Jews only, Gerhard Braun was arrested in the course of the November pogrom in 1938 and taken to Sachsenhausen concentration camp, where he was detained for five and a half weeks. He was released in December 1938, on condition that his family paid a large sum in tax and that he emigrated.

12-year-old Ruth was sent ahead to safety in England in late 1938, staying with family friends – Curt and Hilde Sluzewski who had had already emigrated from Germany – in London. Gerhard and Anneliese followed in early 1939. Since they had been forced to leave behind most of their possessions, and Gerhard Braun was forbidden to work, the family, for more than three years, was reliant on the generous support of Marcel Wolfers, a merchant in the China trade.

Gerhard Braun was detained as an ‘enemy alien’ at the Huyton internment camp near Liverpool for several months in 1940. Only from 1942 was he able to practice medicine in England, as a junior hospital doctor in Birmingham. However, his health had been seriously impaired by his mistreatment at the hands of the Nazis and he died in 1946, at just 52 years of age. 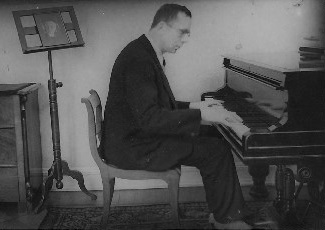 Gerhard Braun at the piano. – Photograph by permission of Christopher Braun

Anneliese and Ruth Braun eventually moved from Birmingham to London, where they shared a house in Golders Green until Anneliese Braun’s death in 1996. Mother and daughter were extremely close, and together they were known as ‘the Pummels’ to family and friends.

Anneliese Braun was an amateur writer since her youth, and some of her poems and short stories had been published in German newspapers before 1933. Even before coming to England in 1939, she had begun to write in English as well, and later she also translated works by other writers, including Monika Mann, Ruth Tenney (Marcel Wolfer’s wife) and Veronica Erdmann-Czapski, with whom she was friends.

Ruth Braun, having attended Birmingham Theatre School as a young woman, also had a lifelong interest in drama and music – in many ways, following the family tradition. Her ‘adopted grandfather’, Felix Friedmann-Braun (1861-1934), had been a brilliant amateur pianist in Berlin, and his four children grew up in a prosperous, cultured family with many links to leading literary, musical and artistic figures in Germany. 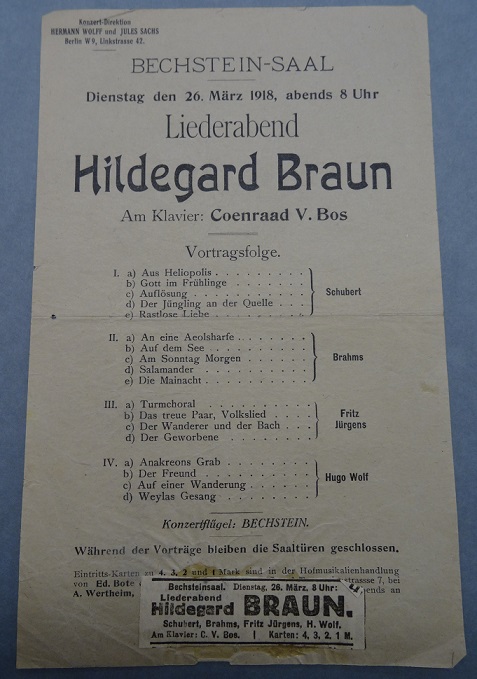 Poster for a recital by Hildegard Braun in Berlin, 1918. The Bechstein-Saal, a chamber music hall with more than 500 seats, had been opened 1892 with a series of concerts by Johannes Brahms, Anton Rubinstein and the like. Hildegard Braun certainly was in good company! – Photo: Braun Family Archive

Daughter Hildegard was a successful professional singer, the youngest son, Johannes, an actor. Konrad Braun was a keen amateur violinist and played in a string quartet with friends (Curt ‘Slu’ Sluzewski, amongst others), while Gerhard had inherited his father’s talent as a pianist. Gerhard also composed short pieces of music, such as birthday serenades for Ruth, and set to music verses by his wife Anneliese and poems by Ruth Tenney. Some of his compositions survive in the archive (MS. Braun 221), and together with a collection of family verse compiled by Thomas and Christopher Braun (MSS. Braun 168-169), these give a wonderful glimpse of the important role that music, literature and writing played in the Braun family’s life – as a profession, as a pastime and for pleasure, and not least, as a source of a sense of identity, dignity and hope in times of hardship. 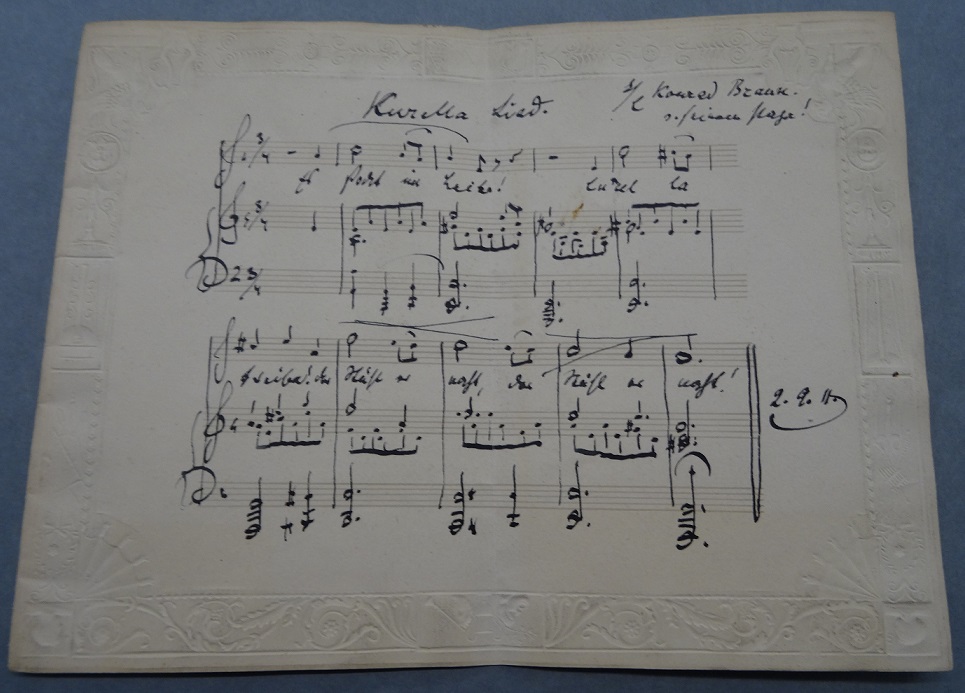 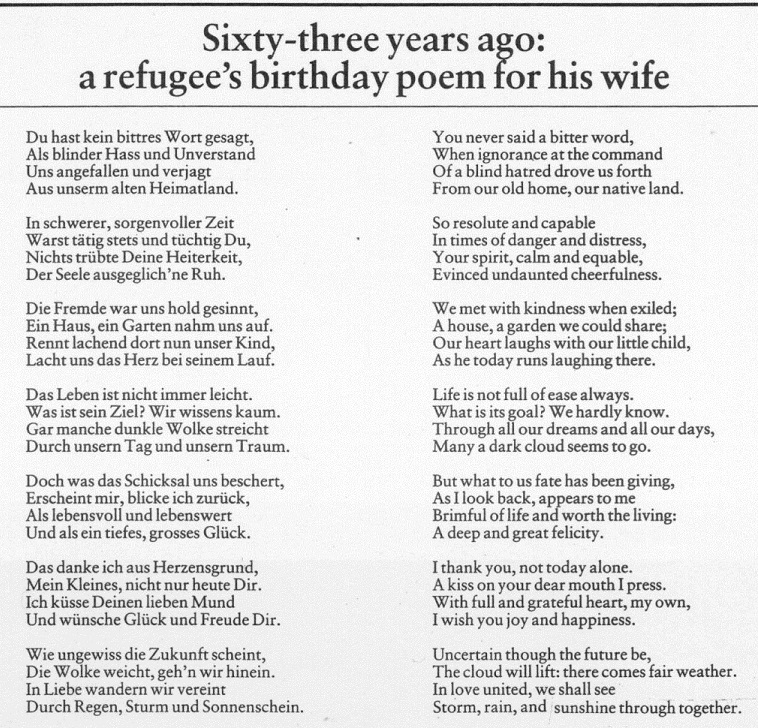 Poem written by Konrad Braun for his wife Hildburg’s 30th birthday on 14 May 1940. Just a year earlier, they had emigrated from Germany to England to escape persecution by the Nazis. The poem was published 63 years later, transcribed and translated by their son Thomas Braun, in The Oxford Magazine, No. 216, 2003. – Photo: Braun Family Archive

Find out more about the Braun family story, and about the archive, here.

The Braun Family Archive was donated to the Bodleian Library by Christopher Braun, London, in several tranches between July 2010 and May 2017, together with a grant towards the cost of preparing the catalogue.