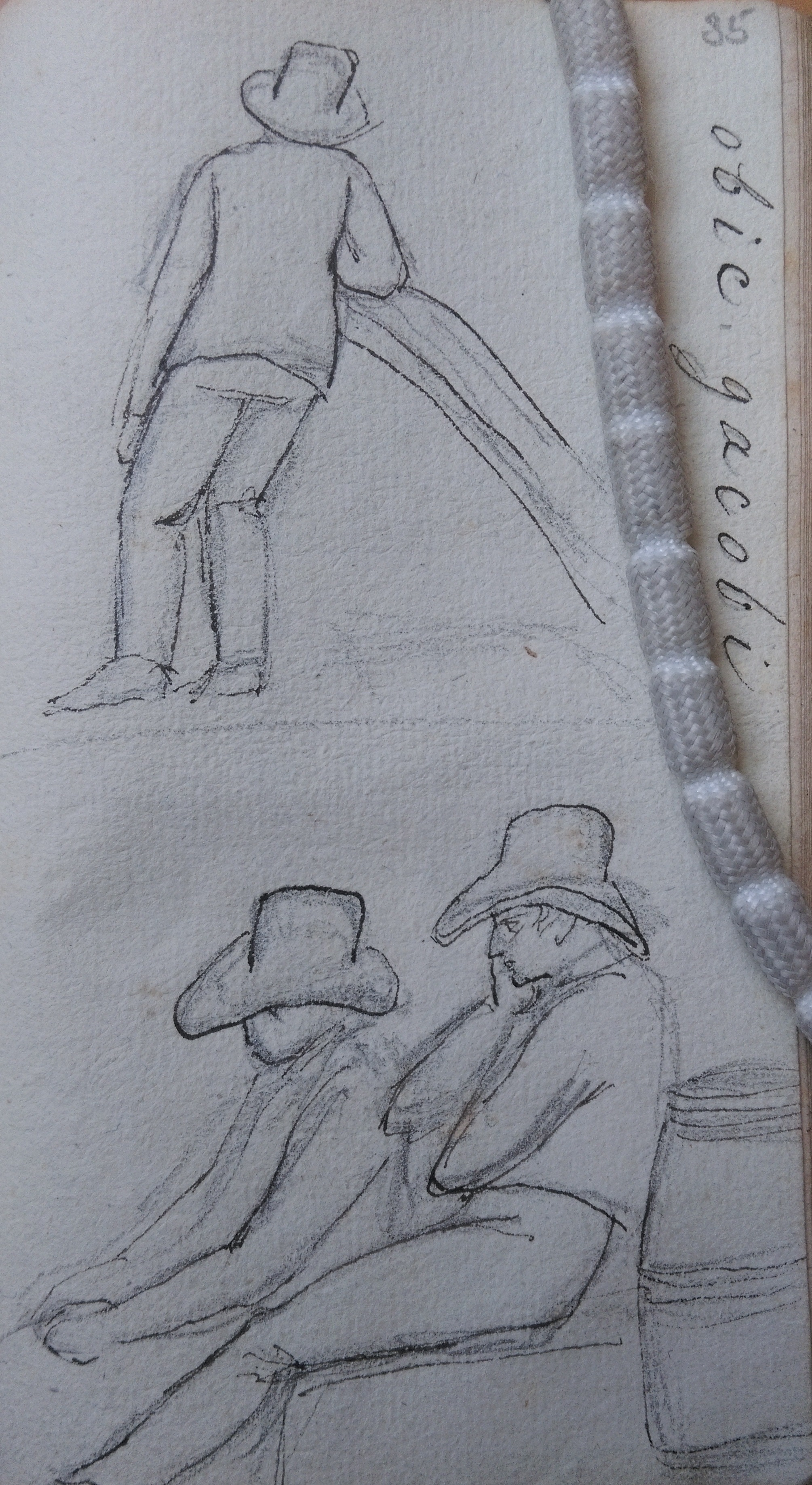 Readers of the Archives and Manuscripts blog will have noted that the internet has been invaluable in helping to discover anonymous authors of diaries in the Bodleian, both recently acquired items (see Search and Searchability), and manuscripts that have been in the library for more than 250 years (see Discovered! A ‘lost’ diary of Sir Edmund Warcup). This latest discovery relates to a diary purchased in 1921. 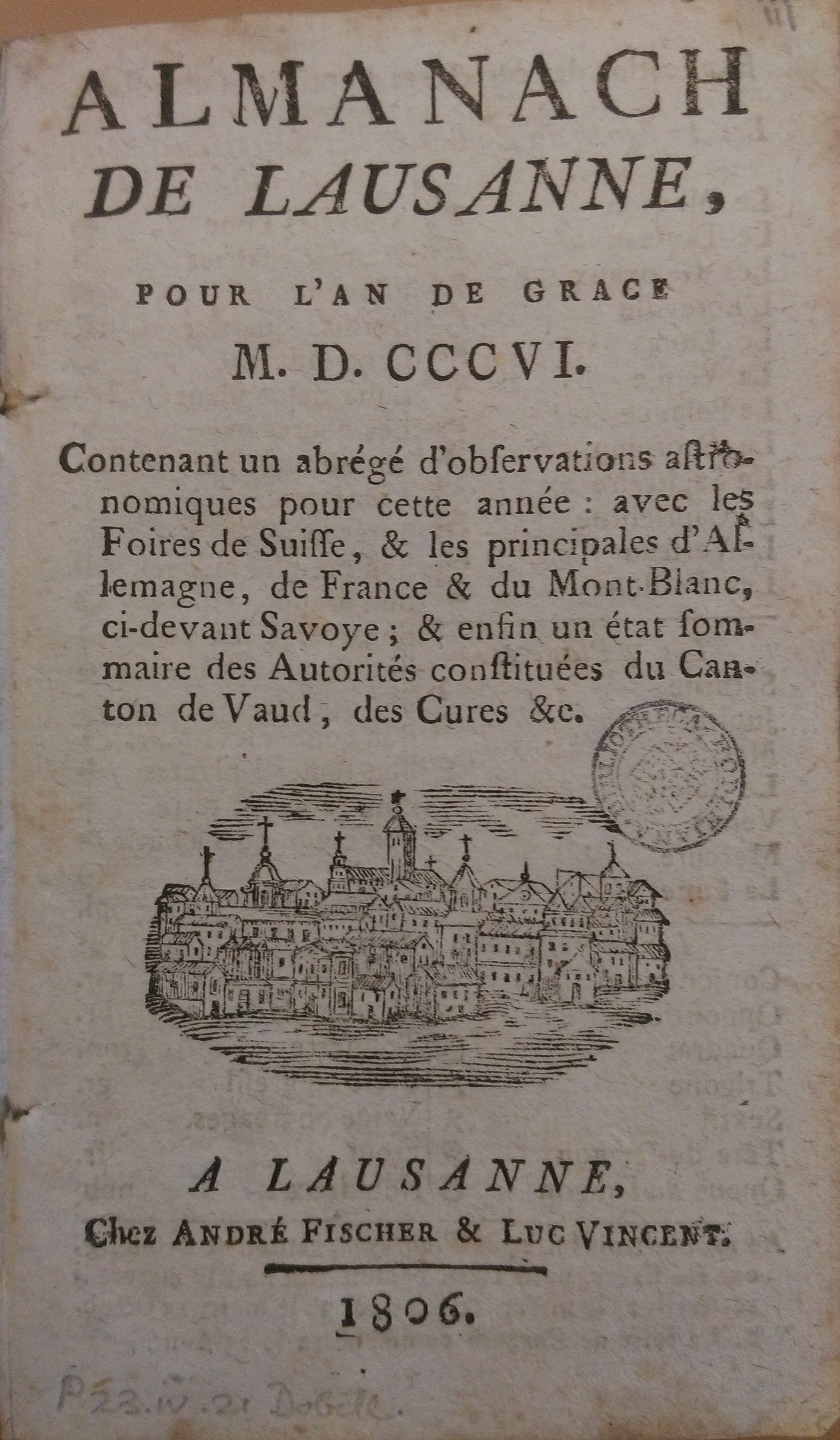 The diary is described in the Summary Catalogue thus:

This rather unhelpful description immediately caught my eye. I was intending to use this intriguing diary as one of the manuscripts to investigate in a workshop held in the Bodleian in 2015 when students were invited to see if it would be possible to supply authors to a group of anonymous travel diaries using internet resources (Travelling Incognito workshop). However, it is a fairly fragile item and it was deemed unsuitable for the workshop.

There are some oddities about this diary. Most obviously, a simple ‘continental tour’ is not something that would have been lightly undertaken in 1806. Most British travel diaries in this wartime era either date from 1802, during the brief peace of Amiens, 1814, after Napoleon’s first defeat and exile to Elba, and 1815 after his final defeat at Waterloo. Why would anyone be travelling in 1805-6, at the height of the Napoleonic Wars? Napoleon defeated the Russians and Austrians at Austerlitz in October 1805, and the Prussians at Jena and Auerstadt in October 1806. So our diarist seems to have chosen a war zone for a tourist destination – indeed, the earlier part of the diary includes a stay in Weimar.  In 1804 Duke Charles Augustus of Saxe-Weimar married his son to the sister of Alexander I of Russia, and then joined the Prussians in their war with Napoleon. As a consequence of the defeat of the allied coalition, the Duke had to join the Confederation of the Rhine, Napoleon’s new German order following his abolition of the Holy Roman Empire in 1806. All in all, not a good time to be a British tourist in Germany.

My first thought was that some mistake had been made. The diary is written in a printed almanac of 1806 – perhaps the manuscript diary was written a few years later? A brief perusal of the short diary soon put me right. The 1805 diary at the end of the volume is clearly headed as such, and the author was in Weimar at this date. There are no substantial entries between February and 20 June, at which date the diarist left Weimar, heading for Gotha then Eisenach, Fulda, Frankfurt and Wilhelmsbad, where the author notes, ‘an alarm on account of the French’, September 1805. By the last entry in this section, Basle has been reached. This section of the manuscript is on a gathering of leaves sown into the binding of the printed almanac towards the end. It is necessary to return to the beginning of the volume to continue the story, which begins 1 January (no year) when the diarist was given a gown as a New Year gift by ‘Mr Hare’. So it was reasonable to assume that the diarist was a woman.

What, then, was the relationship to Mr Hare, and what were they doing abroad in 1805-6? That they were still on the continent in 1806 was apparent from further entries. On 6 January the diarist attended a ball where she ‘danced only once, & with the Prince of Mecklenbourg’, presumably the Prince of Mecklenburg who visited Madame de Staël in Coppet, Switzerland, in 1805 . On the same page she noted ‘finish’d the portrait of Mr H’ which sounds formal enough to suggest that she was something of an artist. As the catalogue entry notes, there are indeed a few sketches in the diary.

Our diarist was moving in quite elevated circles, and Mr Hare seems to have been the key figure in her entourage. This promising lead was reinforced by a stark entry in the diary:

This was crucial information. Entering the words Hare died Lausanne April 1806 into a search engine produced remarkable results. Among these was a Wikipedia entry for Francis Hare-Naylor, which included the information that ‘on Easter Sunday, 1806, Georgiana Hare-Naylor (his wife) died at Lausanne, leaving her children to the care of Lady Jones (her eldest sister). The Handbook of Dates confirms that Easter that year was indeed 6 April. Georgiana was the cousin of her more famous namesake, Georgiana, Duchess of Devonshire.

Who were the Hares (Hare-Naylors)? How was our diarist connected with them? And what were they doing in Weimar and Lausanne in 1805-6? The answer to some of these questions can be found in the DNB entry for Francis Hare-Naylor. It would appear that the Hare-Naylors went to Weimar for several reasons, a combination of political, social and financial problems in England that made removing to the continent desirable, coupled with Mrs Hare-Naylor’s failing health. Weimar  attracted the family because of the literary circles that were established  there, among whom was Goethe, and because they had developed a good relationship with the ruling Duchess. The move to Lausanne was presumably partly occasioned by the political developments mentioned above. Once Mrs Hare-Naylor had died, the family made a rather hazardous journey back to England. After crossing the Rhine and then the Danube, the diarist noted that they

“pass’d through a number of French troops, always civil”.

By the end of 1806 their journey had taken them to Hamburg, and by 23 July they had landed at Gravesend. It appears that the sketches in the diary might have been done on this voyage: there is a view of the English coast (probably Orford Ness – my thanks to Sumner Braund for helping to identify this), and a number of figures who appear to be lounging on or below deck. Could they be rather bored young Hares? 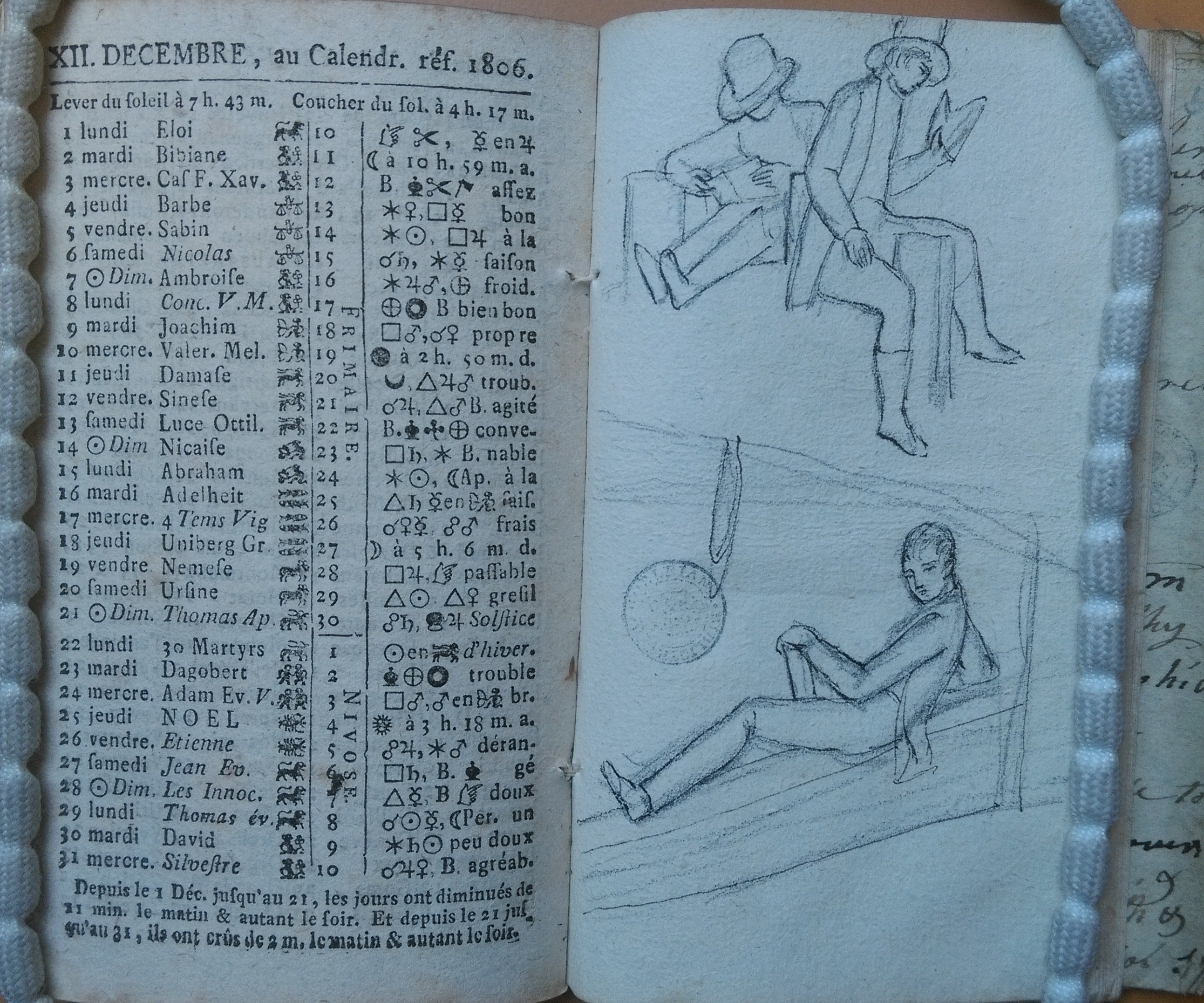 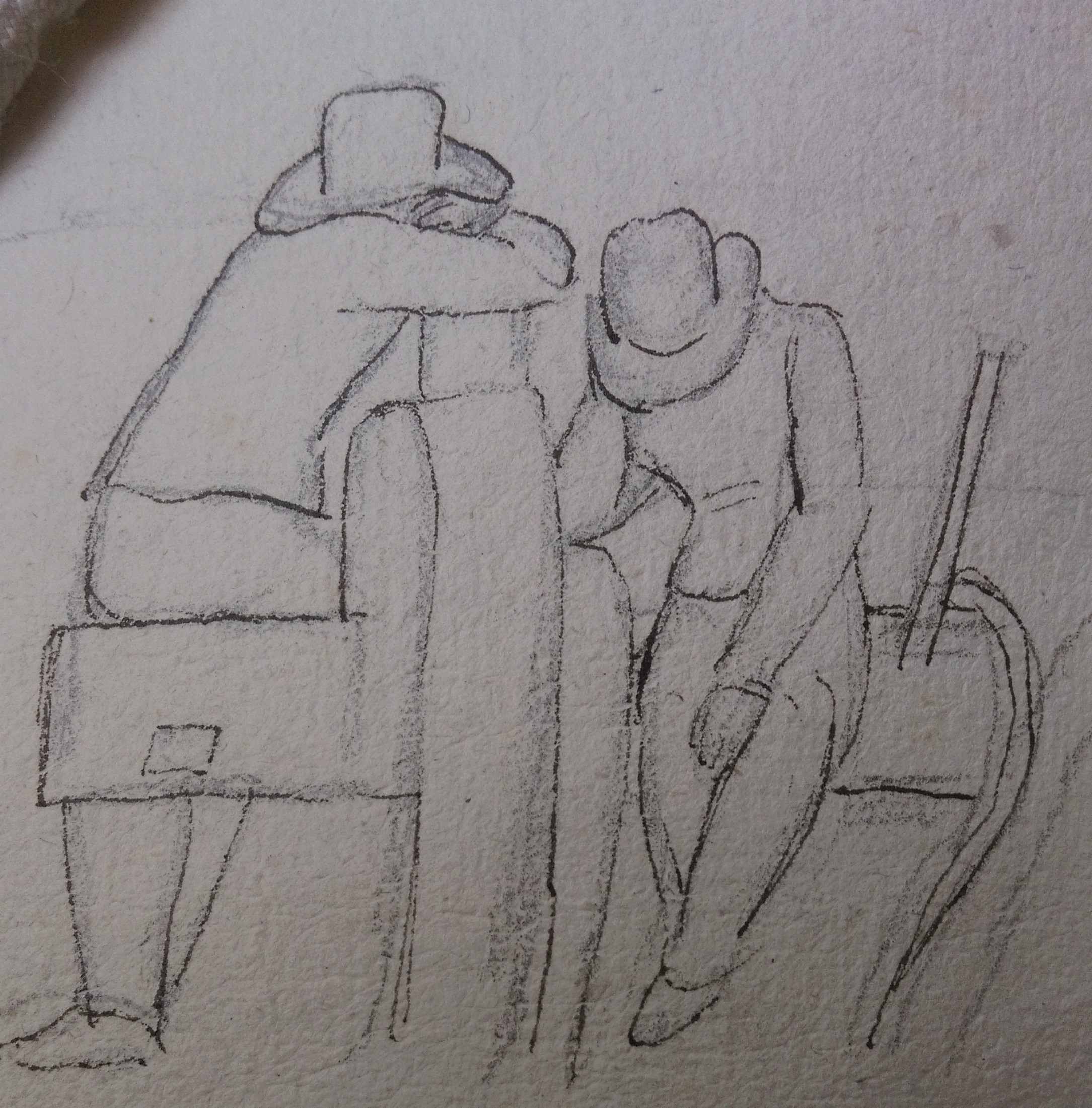 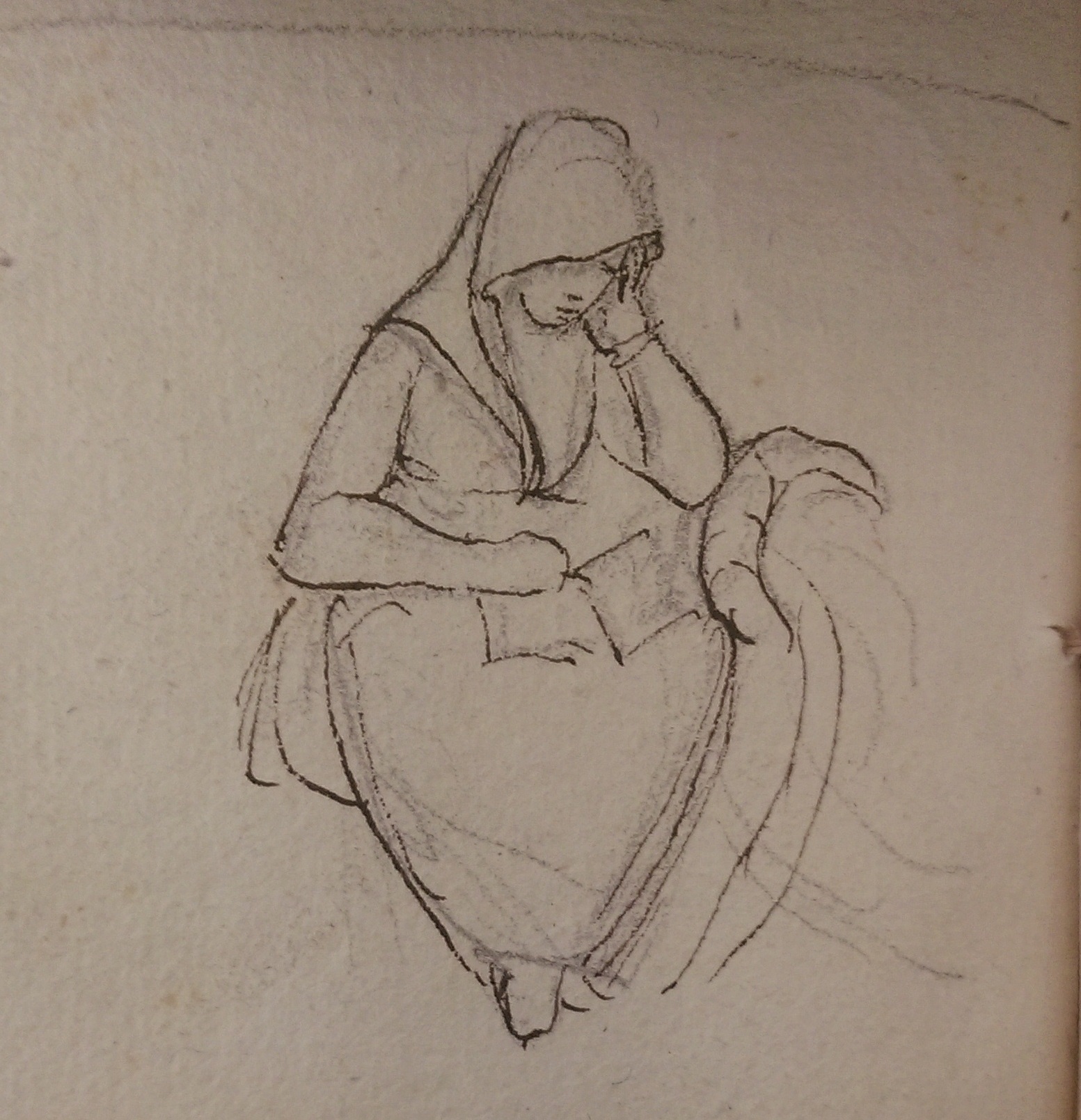 The diarist was clearly on intimate terms with the Hare family, but not a member of it. Michael Heafford (University of Cambridge) who has worked on travel diaries and in particular on travellers in Switzerland, made an inspired suggestion. Could she be the Hares’s governess, Mary or Maria Flaxman? This suggestion was the key that unlocked the diary. Everything fell into place, and the locations, the names mentioned, and the sketches, all made sense. Mary is well known enough to have left substantial traces in the records. She was the half-sister of the famous sculptor John Flaxman (1755-1826). His DNB entry shows that he had a European reputation – he was even invited to the the Musée Napoleon in Paris in 1802. The DNB article goes on to say:

“In Germany, too, Flaxman was acclaimed as both sculptor and illustrator. His half-sister recorded seeing copies after his sculpture being sold in Hamburg, and in Weimar she met Goethe, who told her how much he admired her brother’s art.”

Augustus J. C. Hare, grandson of Francis and Georgiana Hare-Naylor, gives an account of the Hare-Naylors in Memorials of a Quiet Life, published in the 1870s. He mentions John Flaxman’s friendship with the family, and the advice he gave to Georgina to improve her own painting skills. He also states:

“Flaxman, who, with his sister (who was governess to little Anna), accompanied the Hare-Naylors to Weimar.”

There is a separate entry for Mary Ann Flaxman in the DNB, under the main entry for her brother. This too highlights the Hare-Naylor connection, and shows that Mary was an artist in her own right:

“Mary Ann exhibited at the Free Society of Artists, the Society of Artists, and the Royal Academy between 1786 and 1819. … For several years she lived as a governess with the Hare Naylor family, first in Italy and afterwards in Weimar. From 1810 she lived with John Flaxman and his wife in Buckingham Street until the sculptor’s death in 1826.”

Sketches and paintings by Mary Ann Flaxman are held in various repositories, and some of her letters are in the British Library. All that remained for me to do to complete the reattribution of the diary was to see if the handwriting of her letters and the style of her sketches matched what was in front of me. Claire Wotherspoon of the British Library very kindly supplied me with scans of some of Mary’s letters in Add MS 39782, and I can confirm that the handwriting matches that of the diary. There are also sketches by Mary Ann Flaxman in the same collection. To my untrained eye at least, there is nothing in the sketch below that makes me think that Mary was NOT the creator of the sketches in the diary reproduced above. The diary is now being recatalogued.

One thought on “Mary Ann Flaxman revealed as the author of an anonymous diary, Weimar and Lausanne 1805-6”