Top-level strategy papers that detail the Thatcher government’s efforts to secure a third term are among papers newly-released by the Conservative Party Archive for 2018. The previously-restricted documents, now made available for the first time under the 30 year rule, form part of an extensive series of party papers from the election year of 1987, including drafts of the Conservative manifesto, detailed plans of campaign activities, and election briefings prepared by the Conservative Research Department. This piece briefly examines two such documents from one of the newly-released files [CRD 4/30/7/25], private briefings prepared for the Prime Minister’s election planning meetings in December 1986 and April 1987, to illustrate the research potential of these newly-available collections. 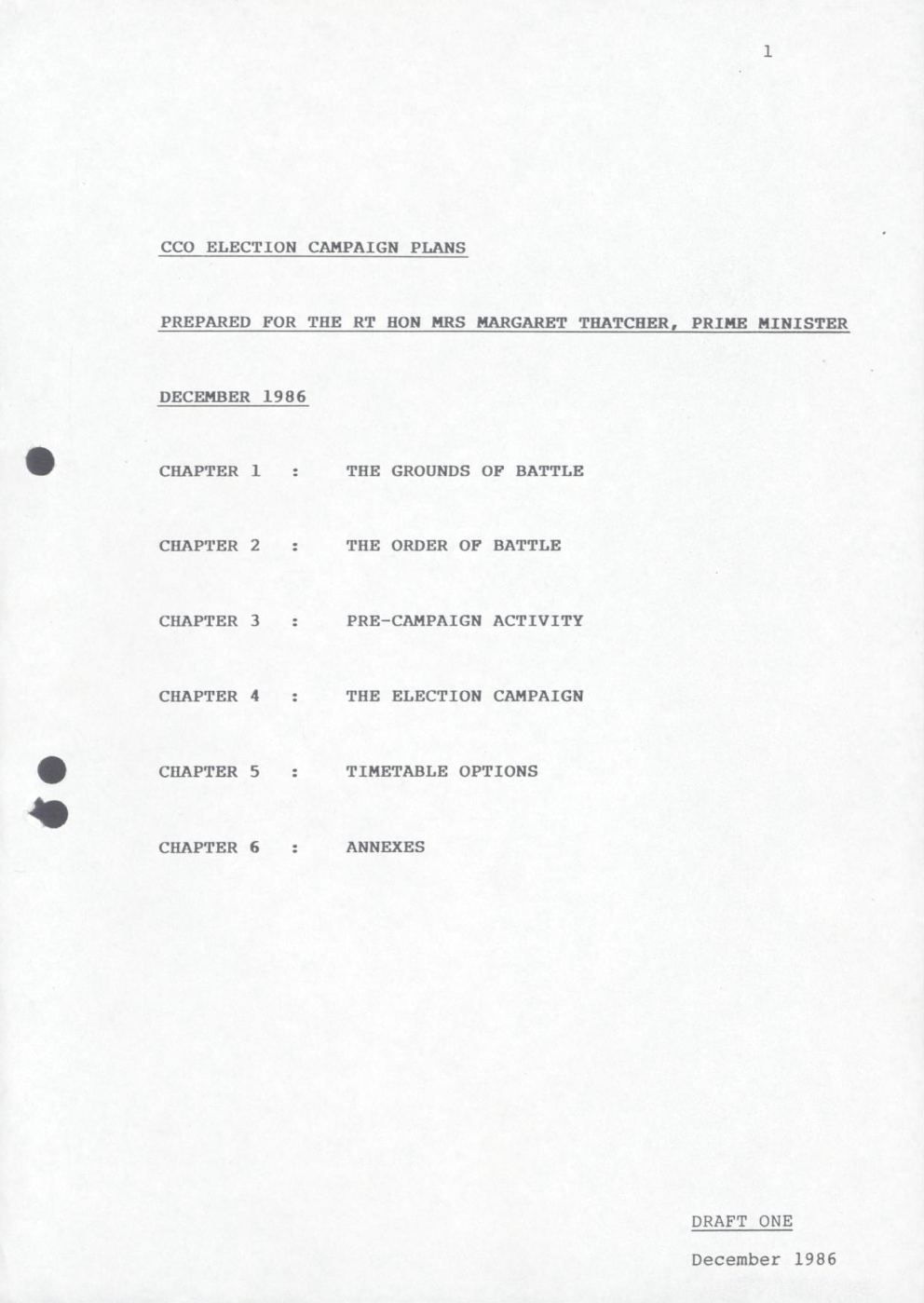 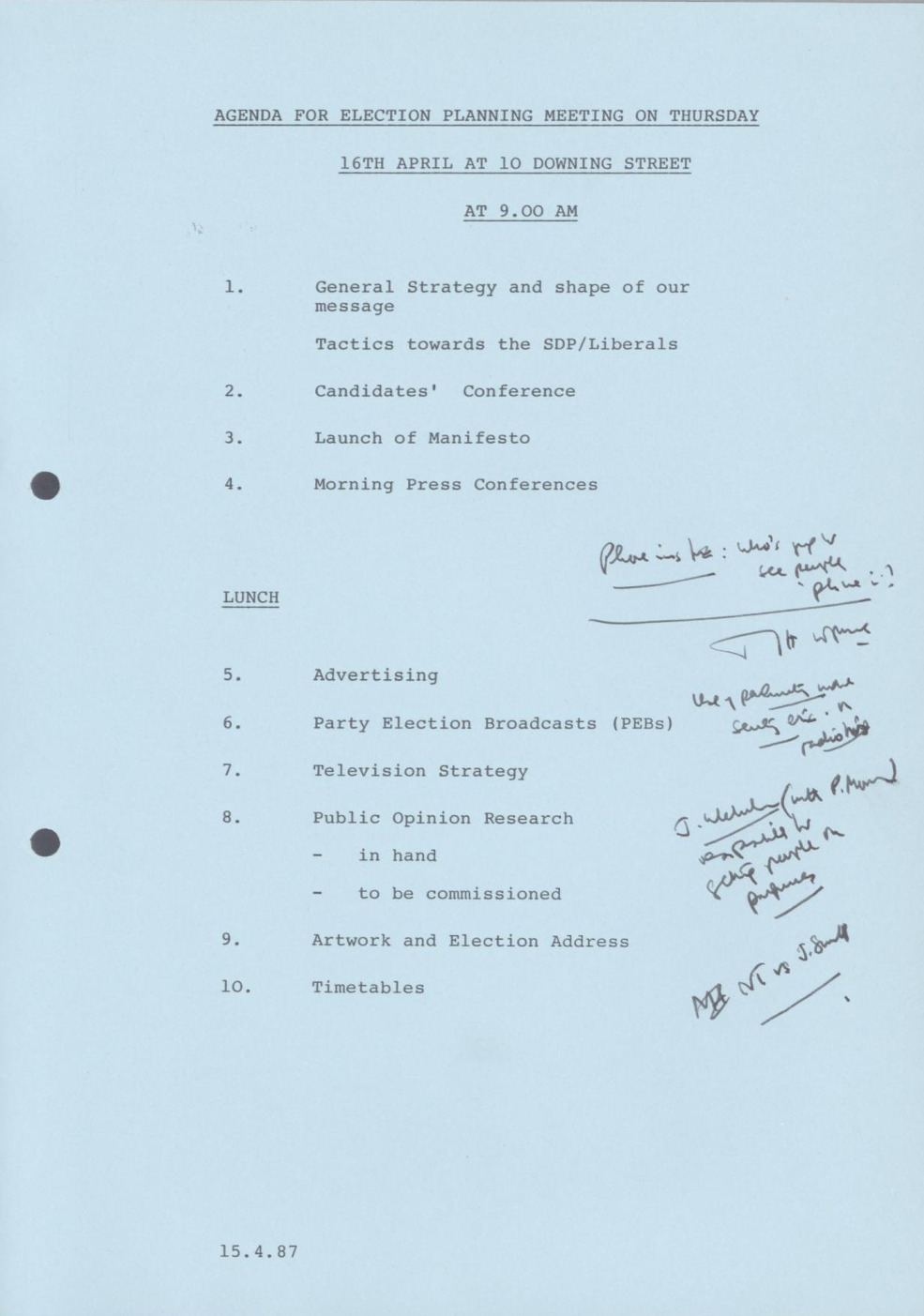 Although the 1987 election ultimately resulted in a second landslide for Thatcher’s Conservatives, the party was far from certain of such an outcome. ‘We believe that the electorate will be in a more questioning mood than in 1983 in the aftermath of the Falklands’, the December 1986 report cautioned, stressing the need for the party to develop and communicate clear plans for the future rather than simply seeking re-election on the basis of past achievements. The changing nature of the electoral map prompted particular concern. Although the Conservatives had opened up a narrow polling lead, the report identified a ‘sharp North-South disparity’, which posed a serious risk to the Conservative position: while the party’s national polling suggested a parliamentary majority of 20, this ‘disappeared entirely and left us in a minority of 2’ when regional variations were taken into account. In an echo of the party’s present-day challenges, the report additionally flagged up the dangers of the growing age-gap in the party’s support: ‘the under 45 group, and particularly first time voters, are still a cause of considerable concern.’ 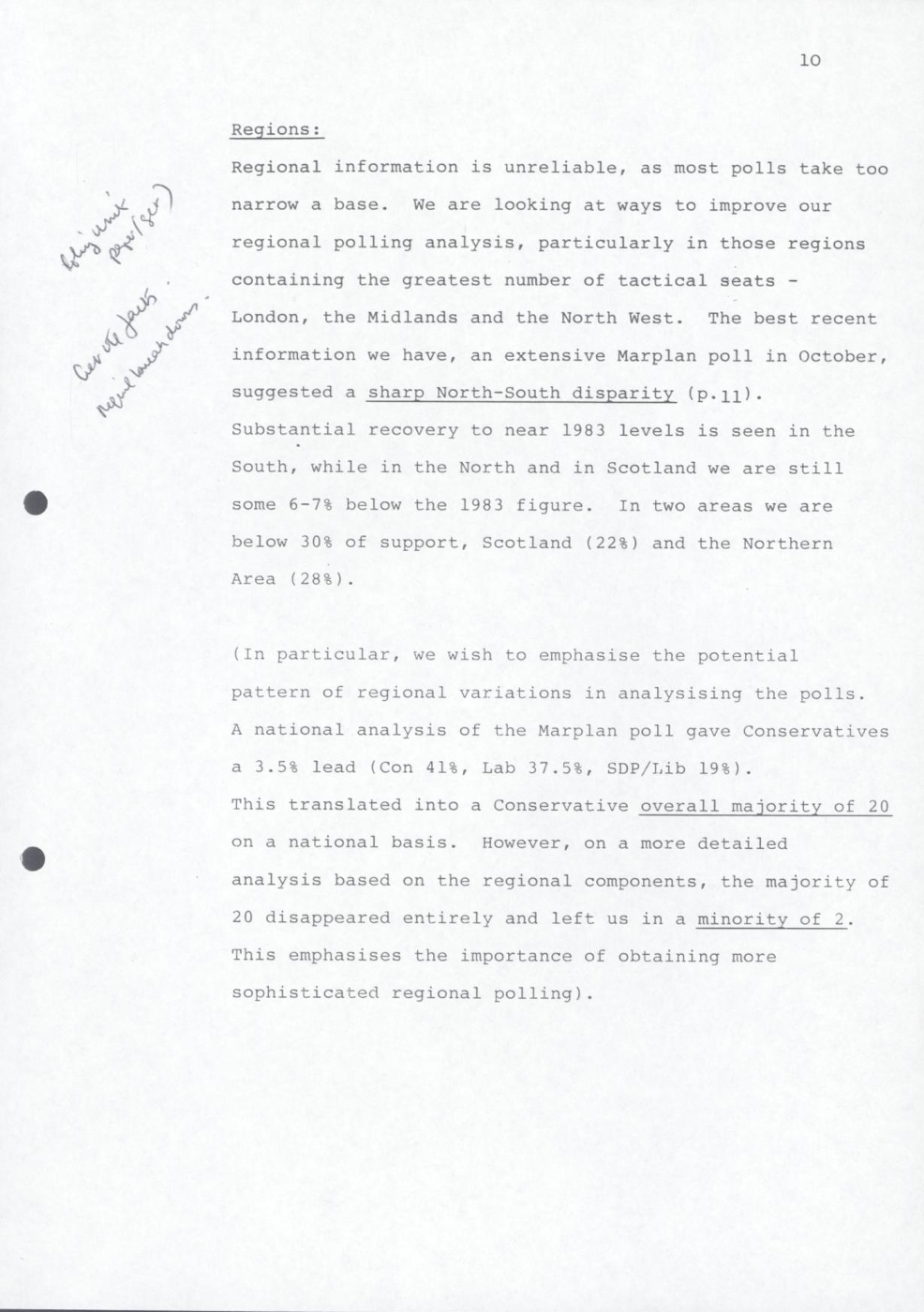 The prospect of a lost majority was still taken seriously on the eve of the election campaign, as the papers prepared for a top-level meeting at Downing Street on 16 April 1987 reveal. Although Party Chairman Norman Tebbit’s paper on general strategy began with the cautious observation that the government were favoured to win ‘with a smaller but working majority’, he warned that ‘the prospect of a hung parliament is attractive to the press and will be promoted by those hostile to us’. To counter this, he urged, the party needed to polarise the issues as far as possible, presenting a Conservative majority as the only alternative to weak or extreme government: ‘Our aim should be to make the supreme issue whether there will be a continuation of Conservative Government or through a “hung” Parliament a Labour administration with Alliance or other minority party support.’ 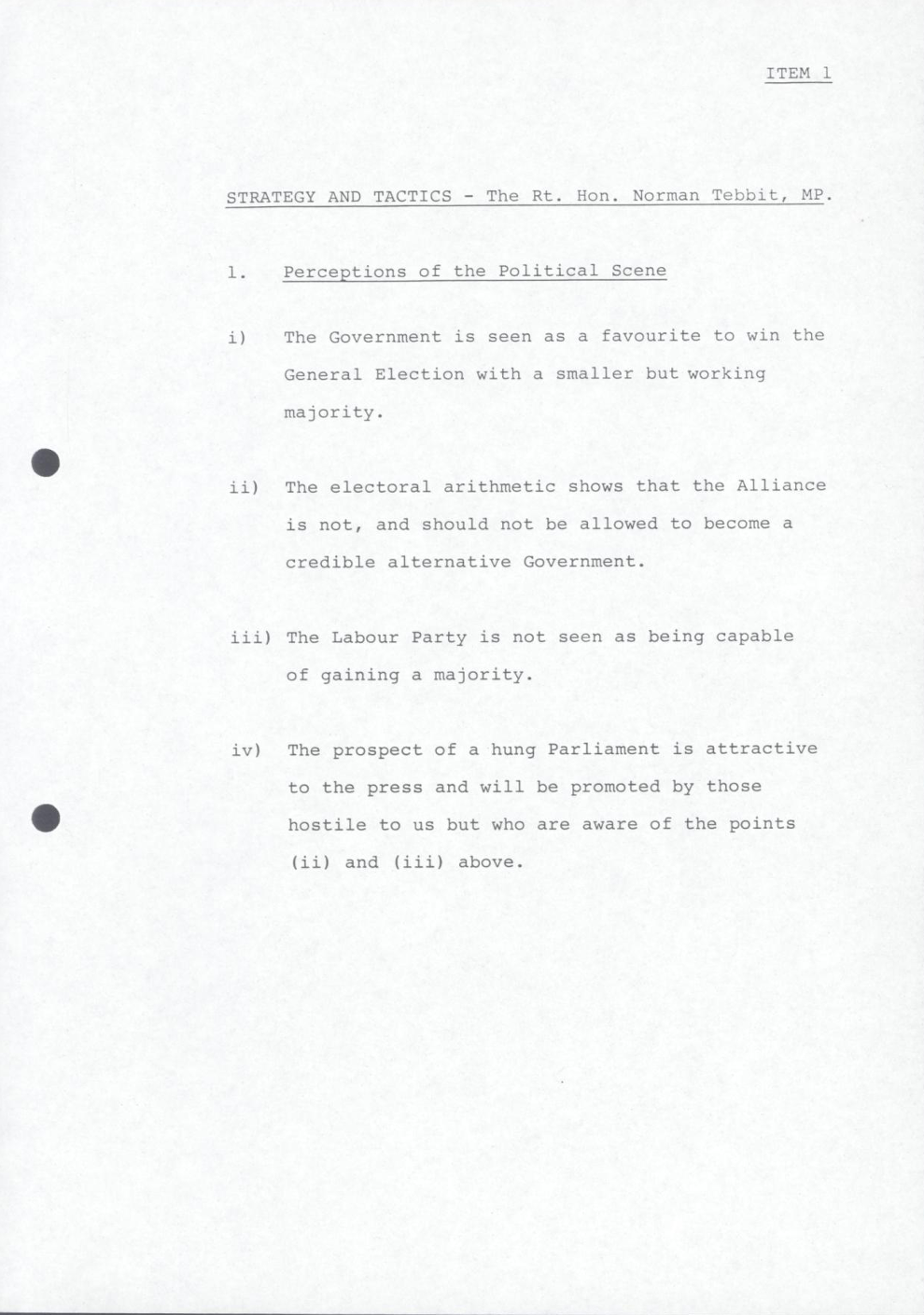 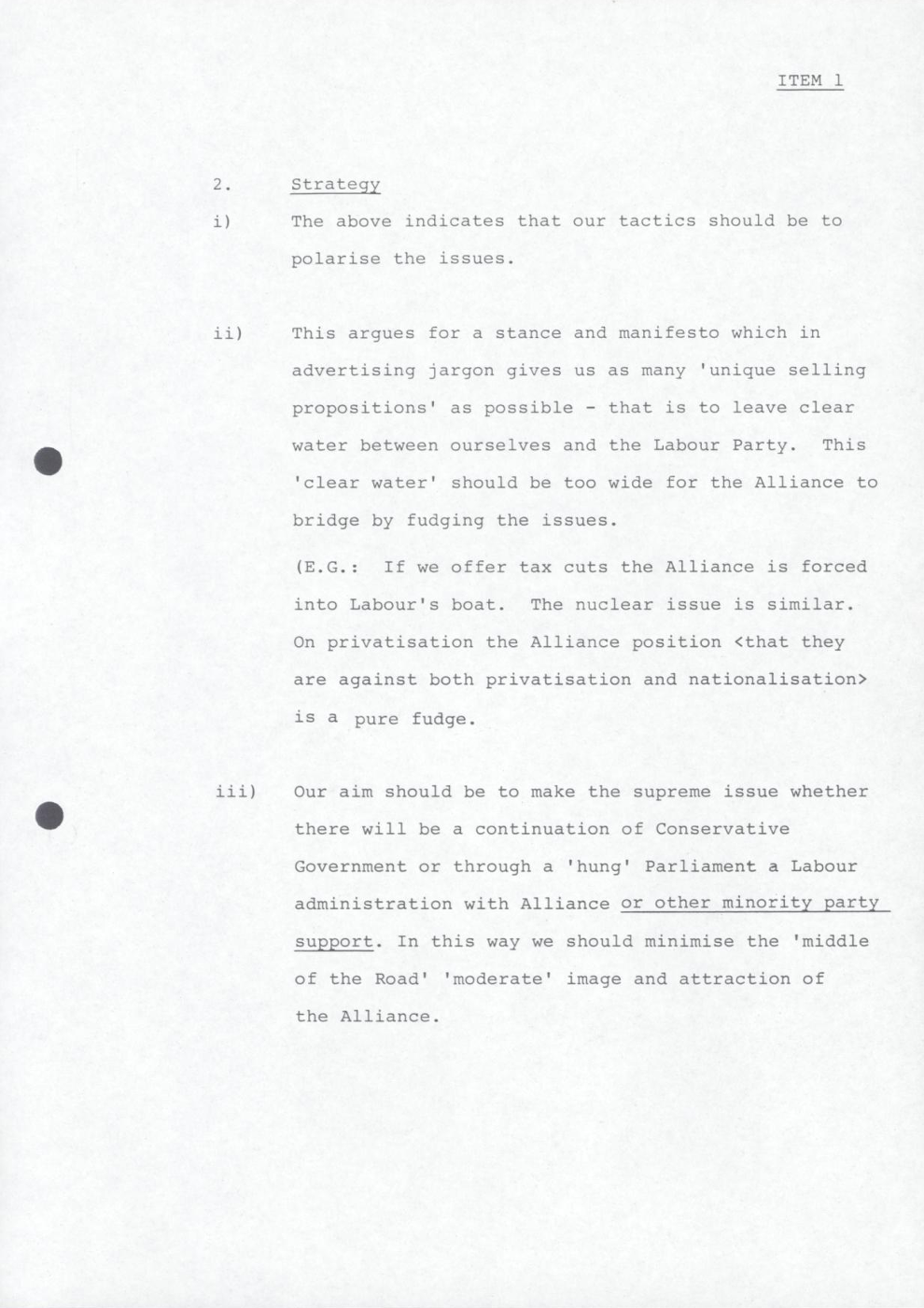 Strategies aside, the party’s election plans also give a fascinating insight into how the party sought to understand and reshape its image going into the election. Discussing the party’s loss of support during the middle of 1986, the CCO Campaign Plans document warned of a ‘a growing perceived conflict between the two important themes of “Calvinism” or “individual responsibility” on the one hand, and “caring” on the other […] reflected in serious concerns about unemployment, health care, education and pensions’. Yet the strategy paper also reveals a resistance to any significant change in course: the proposal to organise the Prime Minister’s campaign tours around the theme of ‘regeneration’ is pointedly removed from the draft document in favour of a more individualistic emphasis on ‘believing [in] people’ and ‘personal property’. Similarly on Thatcher’s own image, the paper goes out of its way to reject suggestions that she adopt a ‘soft’ image, instead recommending a campaign focused upon her strengths: ‘leadership, strength and experience.’ 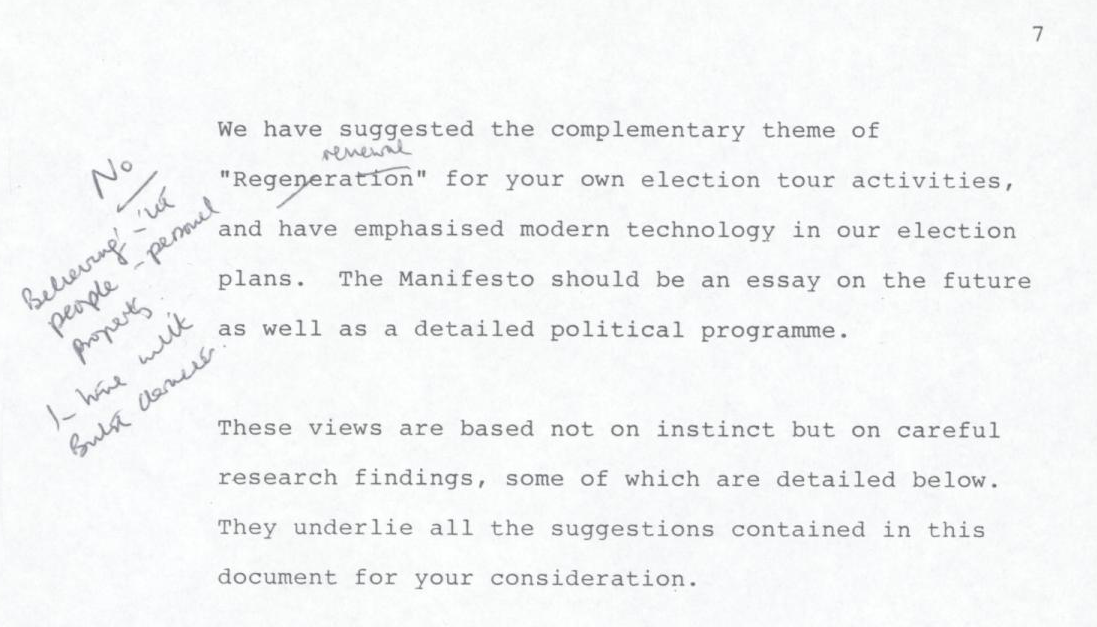 Early plans emphasised that the Prime Minister campaign on the idea of ‘Regeneration’, but as the notes in the margin show others favoured a more ideological campaign theme. [CRD 4/30/7/25].

These papers will provide an essential resource for scholars of the 1987 general election and the politics of the Thatcher era, complementing the Conservative Party Archive’s existing collections of published material from the campaign. The Bodleian has also additionally taken receipt of a large donation of previously undocumented files from this period, so it is hoped that the CPA will be able to continue to expand its collections on the 1987 general election in years to come. 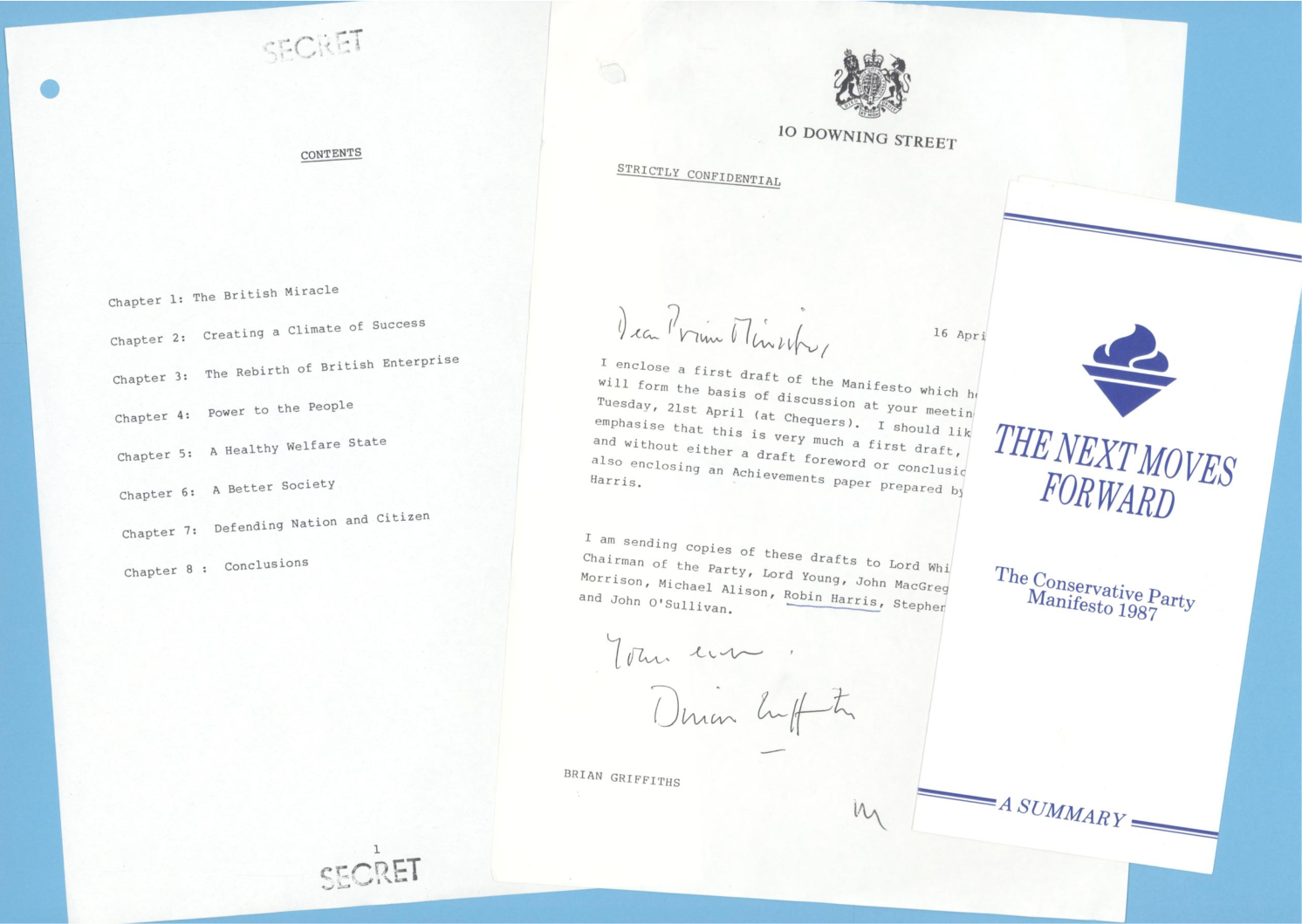 The material examined in this blog post will be made available from 1 Jan 2018. In addition to papers on the 1987 general election, the list of newly-released papers also includes material on the introduction of the poll tax, the party’s private polling and opinion research, and a wide range of briefings produced by the Conservative Research Department. For a full list of derestricted items, see the CPA website.