Next week the voters of Lewisham East will go to the polls to elect a new member of parliament. Using the collections of the Conservative Party Archive, this blog post looks back at the last parliamentary by-election in the borough, held in 1957.

On 16 Feb 1957 a letter arrived at Conservative Central Office on the subject of the Lewisham North by-election, held two days previously. Addressed to the “Party Manager”, it read simply:- “Dear Sir, What the hell are you doing?”. [CCO 1/12/25/3] 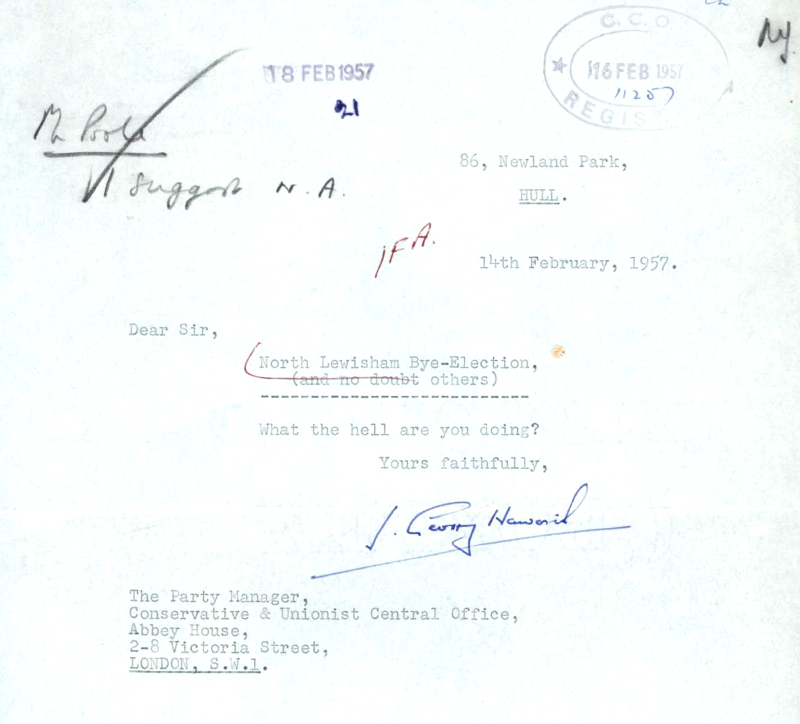 The letter was just one of many critical messages sent in by Conservative supporters around the country following the by-election, which had seen the party lose the seat to Labour on a swing of 5.5%. The vote had been the Tories’ first electoral test since Harold Macmillan had replaced Anthony Eden as Prime Minister – and it appeared that the change in leadership had failed to improve the party’s fortunes.

The by-election was triggered by the death of Sir Austin Hudson, the Conservative member for the seat since 1950. Although present-day Lewisham is seen as a Labour stronghold, in the 1950s the Conservatives had a strong record in the area, and with a new leader in Downing Street the government could be expected to have a fair chance of retaining the seat on a platform of tax cuts and improved living standards. In his election address the party’s candidate, Norman Farmer, urged voters to give a “vote of confidence to the new Conservative government”, and echoed Macmillan’s pledge that “Britain has been great, is great and will stay great.” [PUB 229/1/12]

The Conservative Campaign was soon blown off course however, as Labour went on the attack over the government’s controversial Rent Bill, which dismantled much of the post-war rent control system. The Labour candidate Niall MacDermot used his election address to warn that tenants will be left “at the mercy of the landlord” under the Tory plans. [PUB 229/1/12] The line of attack appears to have worked:- a memorandum by the party’s Chief Organisation Officer on 8 Feb 1957 notes that “The main lines of opposition attack appears to be the ‘Rent Bill’. We are likely to lose Conservative support on the issue… I am not very hopeful of holding the seat”. [CCO 1/12/25/2] 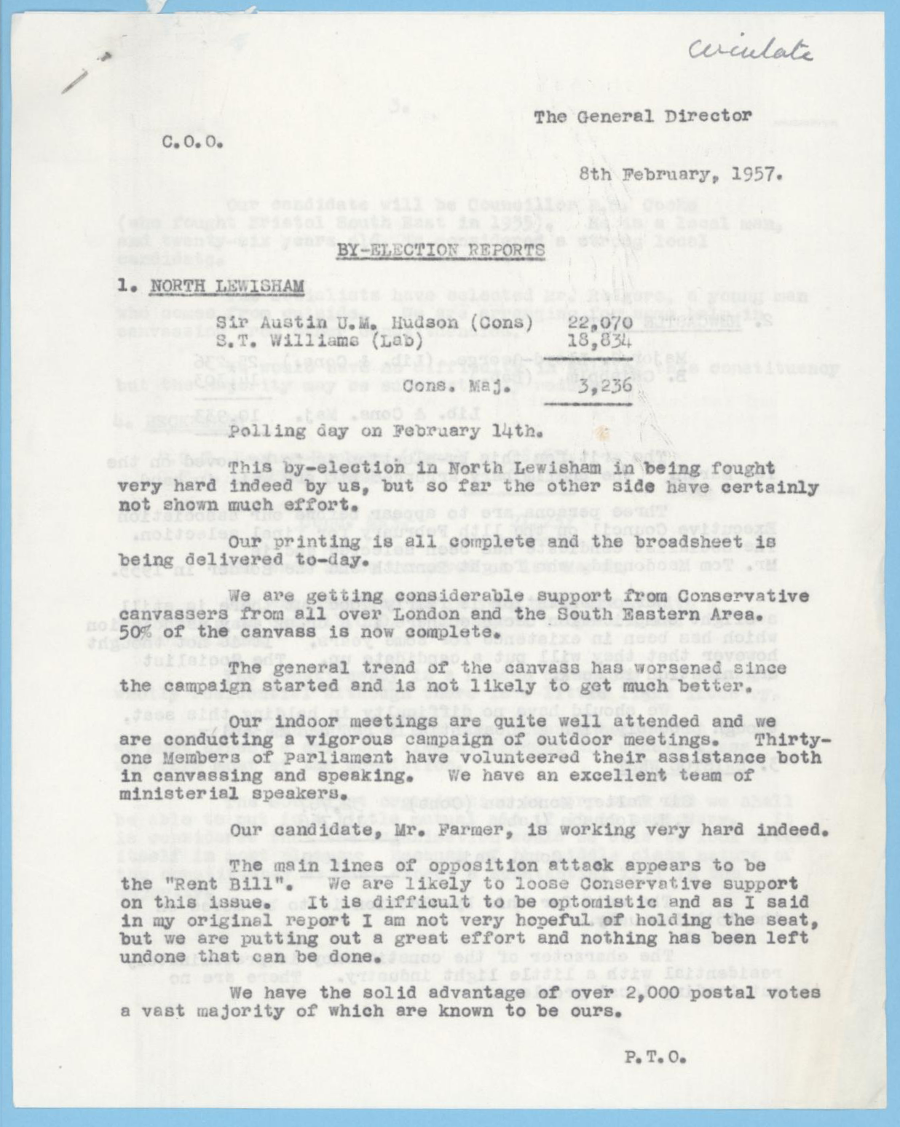 Another issue that haunted the Conservatives was the legacy of the Suez Crisis, which had brought down Eden’s premiership. Not only did Labour continue to attack the Conservatives’ handling of the episode, but in Lewisham North the party also faced a challenge from the right-wing League of Empire Loyalists, an imperialist pressure group that supported independent candidate Lesley Greene. Greene, who was also the organising secretary of the League, used her election address to denounce the government for the loss of British influence over Suez: “All but one of the Cabinet Ministers responsible for this sickening humiliation are still members of the Government. Where is their national pride?” [PUB 229/1/12] The Conservatives sought to counter such charges by appealing to voters’ patriotism: “Don’t Listen to Nasser’s Advice’ urged one of Farmer’s leaflets, claiming that the Egyptian leader wanted to see the Conservatives defeated. [CCO 1/12/25/2] The party failed to defuse the issue however, and the Conservatives were forced onto the defensive throughout the campaign. 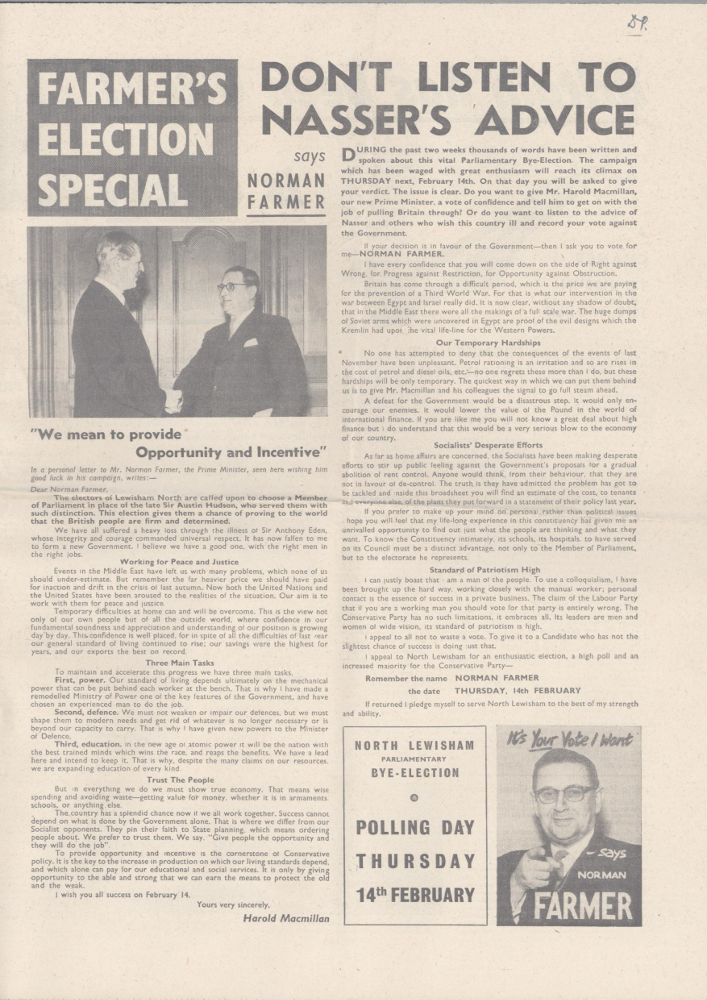 Unsurprisingly, Conservative post-mortem reports on the by-election defeat identified Labour’s campaign against the Rent Bill and the fallout from Suez as major reasons for the defeat. However, the party’s campaigners also identified more practical reasons for the failure to hold the seat:- Labour for instance were accused of deploying an illegal number of cars to ferry their voters to the polling stations (the use of private motor transport in elections was strictly regulated in the post-war period), while one Conservative canvasser berated the party for “knocking-up” their supporters too late in the day, as “it is difficult to get women to vote in the evenings as they have their husbands’ dinners to prepare”. [CCO 1/12/25/3] Reports such as these offer a fascinating insight into the very different nature of election campaigns in the 1950s.

The Conservative defeat in North Lewisham was ultimately short-lived: the party regained the seat in Macmillan’s 1959 general election victory, and subsequently held it until 1966. Even so, the contest gives us a snapshot of British politics at a time of great upheaval and change. Whoever wins in Lewisham East next Thursday, it might well be that historians of the future will similarly look at the records of the campaign in order to understand our own politics and times.

This blog is based on the Conservative Party Archive’s correspondence series and collection of historical election addresses. The archive as whole contains the official papers of the Conservative Party’s parliamentary, professional and voluntary wings, spanning from 1867 through to the present day. Visit our website for more information on our holdings and to view our full online catalogues.