The full catalogue of the Archive of Iona and Peter Opie is now available online.

In addition to the previously published sections on the Children’s papers and covering correspondence and the Opie working papers and material relating to the Opies’ publications, the updated catalogue now also covers the Opies’ professional correspondence, personal papers, and material related to collecting children’s books and childhood ephemera. 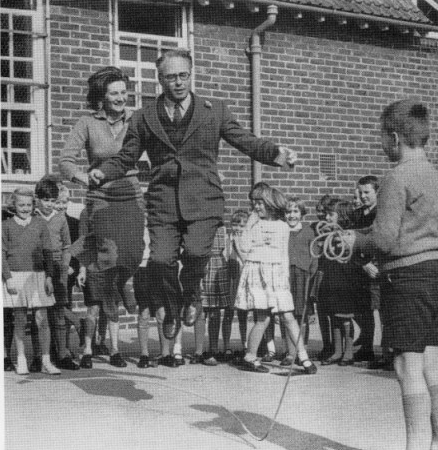 Fieldwork: Iona and Peter Opie in the playground

The professional correspondence series contains letters about nursery rhymes and childlore received by the Opies from the general public, as well as their correspondence with researchers, academics, authors, bookseller, collectors, cultural and heritage institutions, the media, and other contacts and enquirers. It also includes general correspondence with the Opies’ publisher, Clarendon Press, later Oxford University Press, and with professional organisations, such as the Anthropology Section of the British Association for the Advancement of Science, which Peter Opie was president of in 1962/63.
The extensive correspondence with Doreen Gullen, the Opies’ long-term research collaborator and friend, covers both professional and private topics. The series also contains the Opies’ address books, which link each correspondent to a unique reference number – those reference numbers were then used to manage and track the enormous amount of incoming information. The address books often also record background details on the Opies’ correspondents and their activities.

The personal papers feature correspondence with family and friends, diaries and notebooks, memorabilia, writings and other biographical material, mainly relating to Peter Opie. This material was transferred to the Bodleian Library in various tranches in the 1990s, when Iona Opie was sorting through her late husband’s papers, selecting and annotating material for a future Opie Archive. Although it covers most of Peter Opie’s life from his childhood in the 1920s through to his death in February 1982, there is a strong focus on his young adulthood and his early career in the late 1930s and in the 1940s, reflected in particular in his correspondence, scrapbooks and notes, as well as in the papers relating to his early autobiographical publications such as his first book I Want to be a Success (1939).

The collected material series brings together historic childhood and children’s book ephemera, collected by the Opies, and papers about their book collecting activities. Whilst some of this material was found with the Opie Archive, other sections were transferred from the Opie Collection of Children’s Literature at the Bodleian Library. These include manuscript books, historic notebooks and diaries by children or with references to childhood, drawings and illustrations, printed ephemera and merchandise relating to children’s books, as well as exercise books and other school ephemera from the 17th to the 20th century.
The Opies’ book accession diaries, covering their book collecting activities from the 1940s to the 1980s, are part of this series, and so is a large collection of antiquarian booksellers’ catalogues, dating from the 1910s to the 1990s. Not least, there is some material which the Opies took over from other children’s book collectors, such as the working papers and collection lists of their friend Roland Knaster who died in 1979. 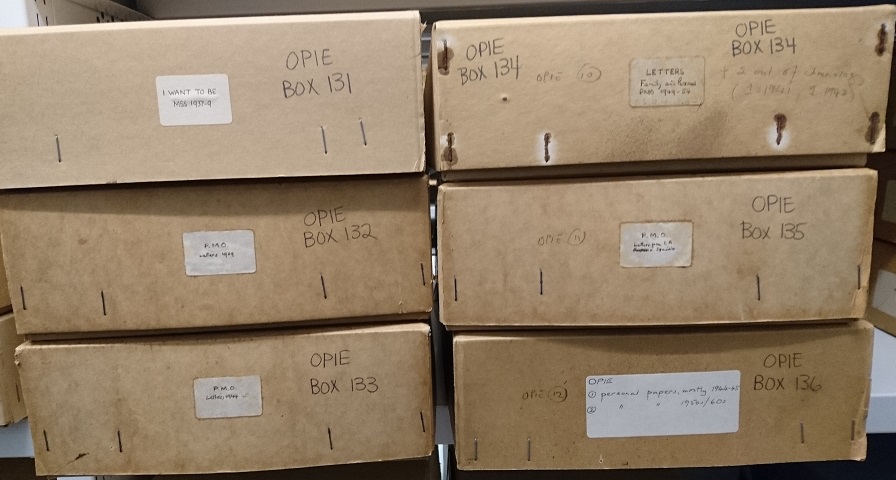 Boxes in the Opie Archive: Before…

…and after sorting, careful repackaging, labelling and barcoding.

More than 24,000 leaves of children’s papers and covering correspondence were individually numbered (‘foliated’) in preparation for the future digitisation of the material.
Simultaneously, the collection became (in-)famous with our Conservation colleagues for containing many exotic and challenging-for-safe-storage items, such as Indian panther bones, a 1920s Eton schoolboy cap, friendship pins, grass samples, and 1970s crisp packets.

Inspired by the descriptions of children’s rhymes and games in Opie working files, we, the cataloguers on this project, regularly lapsed into reminiscences about our own playground rhymes, games and crazes in the 1980s and 1990s (who else remembers French Skipping or Pogs?), and occasionally even broke out into bouts of clapping games, with lively ensuing debates about how the correct version of each song should go – “Em Pom Pee” or “Em Bam Bee”, that is the question!

Requests by readers to access the material had to be juggled with a tight cataloguing schedule – and many boxes were moved back and forth between the archives work areas and the Weston Library reading rooms. It was encouraging to see how much the Opie Papers were already in use, and the many questions researchers ask us about the content and structure of the archive then helped to inform our cataloguing strategy.

Midway through our cataloguing project, in October 2017, we received the news that Iona Opie had passed away, at the age of 94. Although saddened and disappointed to have lost the chance to meet her in person, we nevertheless felt privileged to have got to know her through her correspondence and working papers. We particularly admired her tremendous ability to organise, and distil meaning from, the immense volume of data gathered by her and her husband, while simultaneously building warm and long-lasting relationships with a vast network of correspondents.

In his 1969-73 accession diary (now MS. Opie 316), Peter Opie notes that “the age of the computer is coming”, foreseeing that this may one day facilitate a more thorough organisation of the vast amount of material he and Iona amassed over the years, and ponders the use future researchers might make of their collection, once it has been thoroughly sorted and catalogued:

“And although Iona […] and I will never be able to make use of all the material we have assembled, nor can see even to what use it may be put, I am beginning to think we can be confident that, provided it survives, it will be appreciated by somebody some day.”

The completion of the cataloguing project feels like a good step forward to fulfil Peter Opie’s ‘prophecy’, and we are happy (and indeed a little proud) to have a played a small role in the Opies’ big endeavour. Now it is over to you, the readers, to explore the wonderful resource Iona and Peter Opie created for the research of children’s traditions, nursery rhymes, children’s literature, games and play – and to the put it to innovative and creative uses.

The Opie cataloguing project was generously funded by the Wellcome Trust. 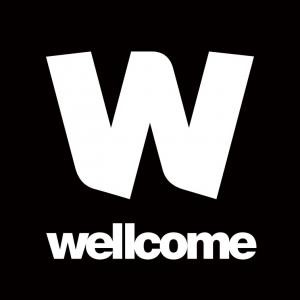 2 thoughts on “Now available: Full catalogue of the Archive of Iona and Peter Opie”