The online catalogue of Shrimpton’s Oxford Caricatures is now available.

Thomas Shrimpton & Son published and sold photographic reproductions of commissioned or submitted original caricatures from their premises at 23-4 Broad St., Oxford, from 1868-1901, their shop window display seemingly their only advertising strategy, there being no evidence of them ever having produced a catalogue or list. 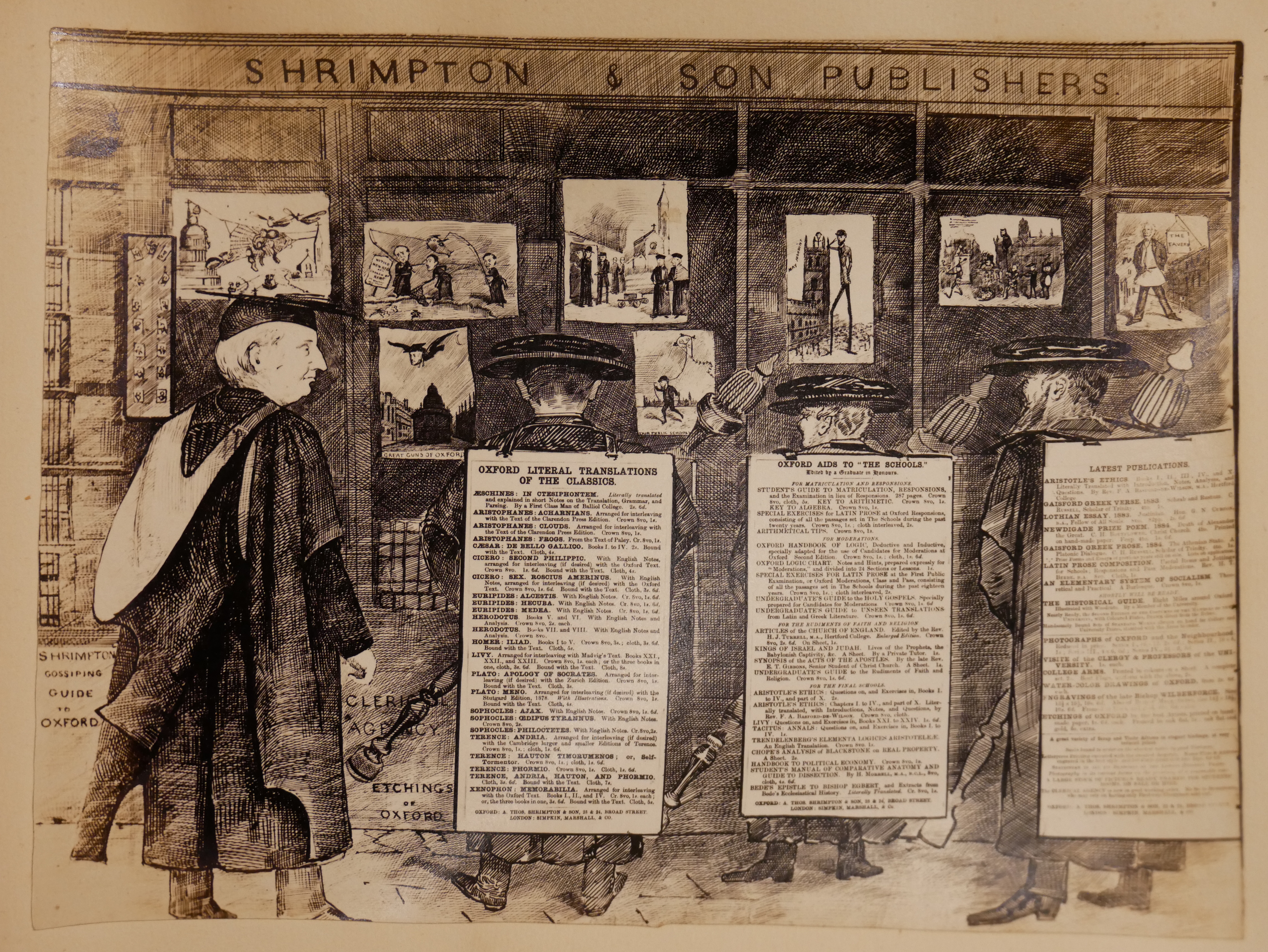 Shrimpton & Sons shop window, with Benjamin Jowett, Vice-Chancellor and Master of Balliol College and three beadles as sandwich men advertising publications for sale, 1884. 8 recognisable caricatures are on display and are held within collection. G. A. Oxon. 4º 417, fol. 1050.

The caricatures were primarily intended for undergraduates and drawn by undergraduates, portraying the trials and tribulations of undergraduate life, as well as the delights, as seen from their perspective. Images are immediate and inventive, and often quite irreverent. Certain individuals received special and frequent attention, their identification, despite (thinly) disguised attempts to conceal their names through clever or simplistic wordplay, were only too obvious to University members. Many caricatures lack a proper caption or title, relying solely upon a pithy phrase, quotation or misquotation to assist the viewer. Some allusions are obscure or meaningless at first sight, but with thought and research their message or humorous allusion has been revealed.

The subject matter includes many aspects of University life, notably University and religious personalities. Other subjects frequently covered are ritualism, politics, aestheticism , ‘town and gown’ confrontations and women, especially allusions to their becoming full members of the University. The imagery is invariably humorous, witty and inventive, covering local (University), as well as, national events; many display learned quotations from classical authors and contemporary poets. Throughout the publishing history distinct series were produced, notably ‘Great Guns of Oxford’ (Nos. 1 – [70]) and’ Our Public Schools’ (Nos.1-27), generally representing an individual in their familiar setting, though always done humorously.  In all there are 1214 images. The 7 albums which comprise the collection would appear to represent the complete set of caricatures published. This set, together with the one in the John Johnson Collection, are the only known ‘complete sets’. I have made every attempt to identify individuals (500+), including caricaturists, locations and events in order to produce a fully comprehensive catalogue. Where appropriate, contextual notes have been added and quotations cited. The locations of the (few known) surviving, original caricatures are provided within the catalogue description.

The heyday of the publishing history of the ‘Caricatures’ in terms of output and inventiveness was 1868-84, after which new publications became increasingly erratic. There was probably a combination of reasons for this, but its long demise may well have started in earnest when Thomas Shrimpton died in 1885 aged 79. Perhaps its commercial potential was already waning. Even so they had become an Oxford institution, known by all at the University at the time and remembered fondly by many for years to come. The importance of these caricatures is not only the number of individuals represented (some of whom may have no existing likeness elsewhere), but also the context in which they appear, alluding to events which would, perhaps, be otherwise completely forgotten.

Until now their full extent could not be fully appreciated. Now, for the first time, this wonderful, visual resource for the study of various aspects of Oxford University life in the second half of the nineteenth century, has been fully catalogued.