Speaking notes prepared for Margaret Thatcher, annotated drafts of William Hague’s election leaflets, and briefing papers written by David Cameron as a young researcher are all among files newly-released by the Conservative Party Archive for 2019. This year, our releases are drawn primarily from the records of the Conservative Research Department (CRD): these comprise the department’s subject files and working papers, its briefings prepared for Members of Parliament, and the papers and correspondence of CRD desk officers. In addition to our regular scheduled de-restrictions, the Conservative Party Archive is pleased to announce that the papers of Robin Harris, the Director of the Conservative Research Department from 1985-1989, will also be made available for consultation for the first time. This blog will briefly look at some of the items to be found in each of these main series, demonstrating the value of these collections to researchers of the Conservative Party and historians of modern British history.

Among the newly-released records are a number of files on the ever-thorny question of Europe, including the minutes and papers of the European Steering Committee, the Party’s coordinating group for the 1989 elections to the European Parliament. These files provide a fascinating insight into the challenges the Party faced in trying to balance the record of its MEPs with the increasing Euroscepticism of British Conservatism: a September 1988 report on the Party’s private polling on Europe, for instance, warned that nearly a third of Conservative general election voters were opposed to EEC membership and would not turn out to support the Party in the European Elections [CPA CRD 4/30/3/1]. The Conservative Party Archive has, separately, also recently acquired the records of the Conservative delegation to the European Parliament in this period, and will be seeking to make these available for consultation later in 2019. 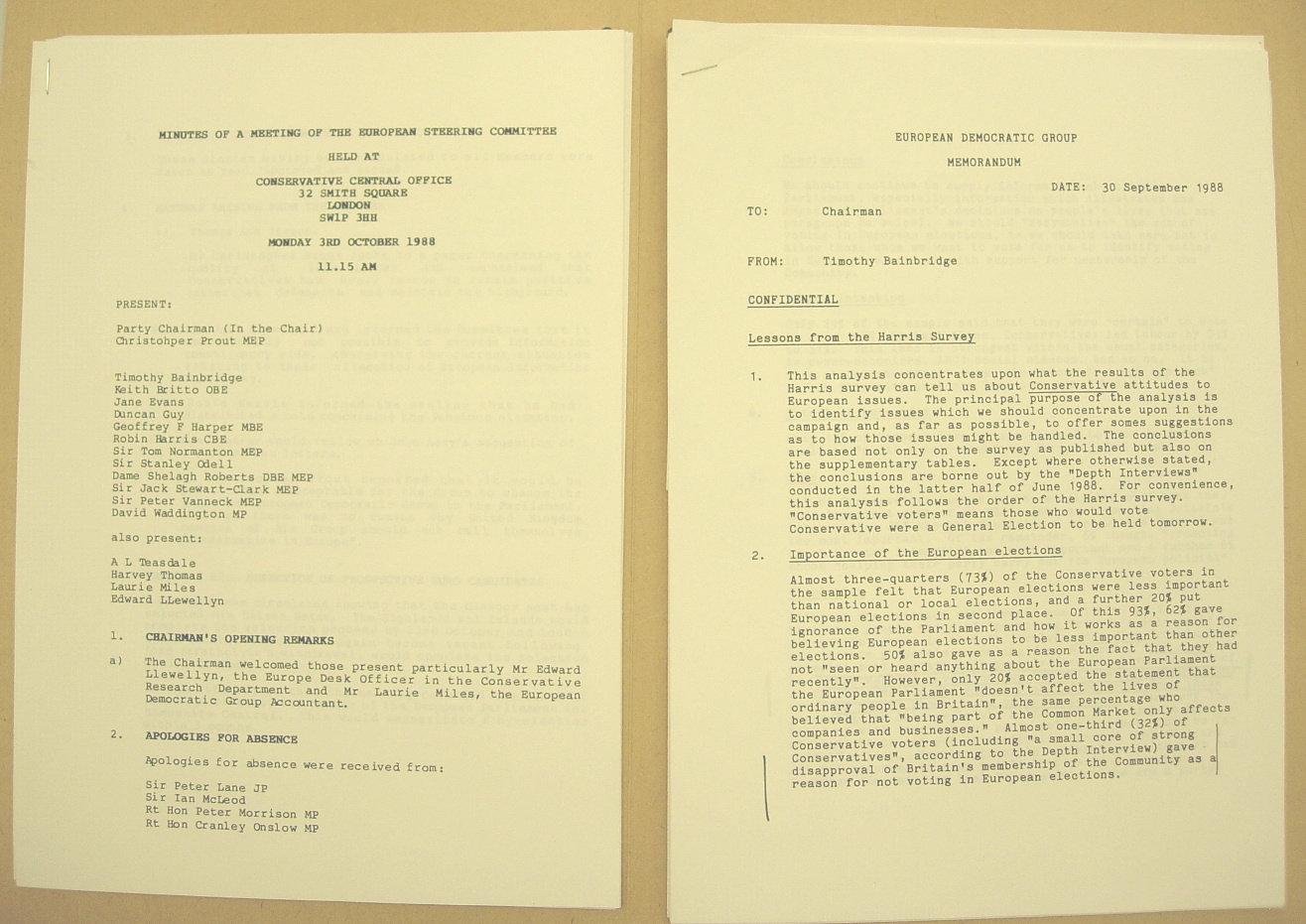 Minutes and papers of the European Steering Committee – CPA CRD 4/30/3/1.

This year’s releases under the thirty-year rule include a wide range of policy briefings prepared by the Research Department. These briefings, typically prepared for Conservative MPs and Peers ahead of parliamentary debates, provide an excellent snapshot of the Party’s thinking, tactics, and rhetorical strategy on the key issues of the day. Subjects covered by the briefings include some of the most prominent policies of the Thatcher government, including the introduction of the Community Charge (Poll Tax) and the privatisation of state-owned utilities. 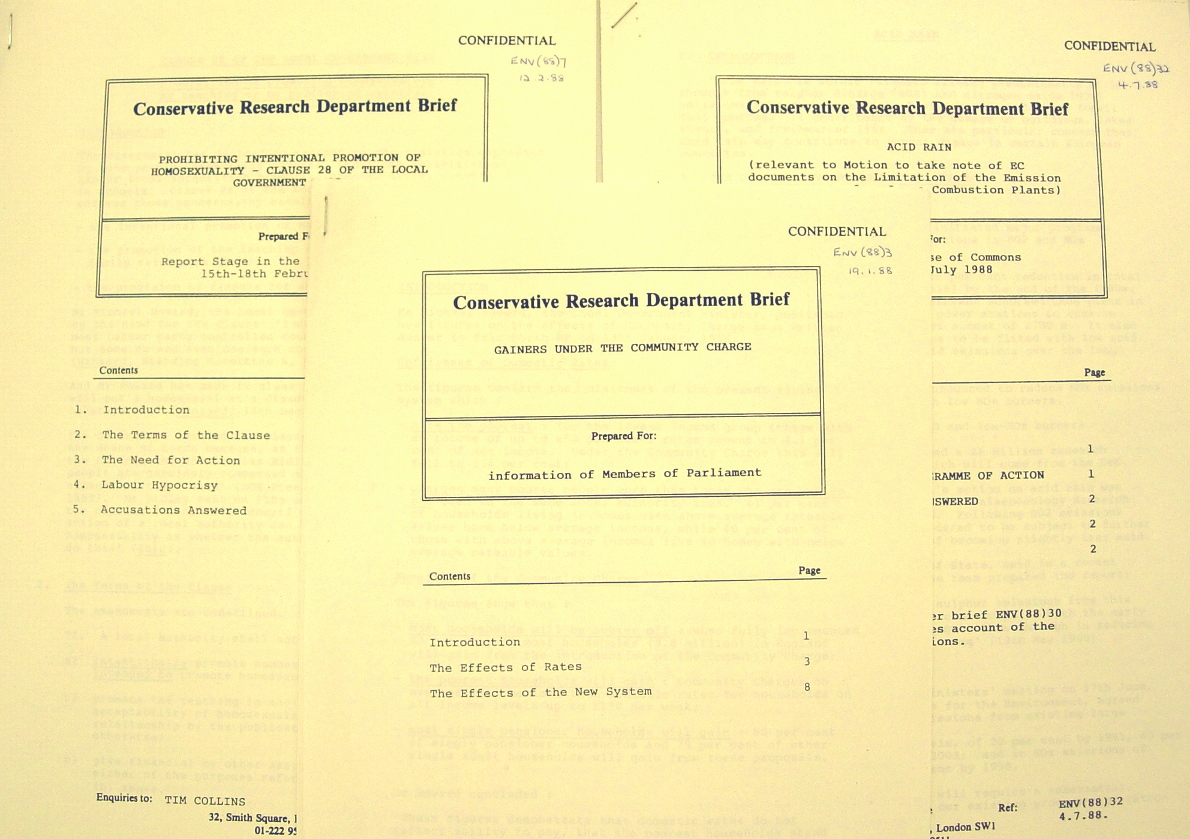 A selection of CRD briefings from the Environment and Local Government file, covering the Community Charge, Section 28, and Acid Rain – CPA CRD/B/11/7.

This series notably includes briefing papers prepared by David Cameron during his time in CRD, covering topics on environmental, energy and industrial policy. In 1989 Cameron became the Head of the Political Section, a post he held in the department until 1992, and we expect to be able to de-restrict more of his papers from this period in the years ahead. 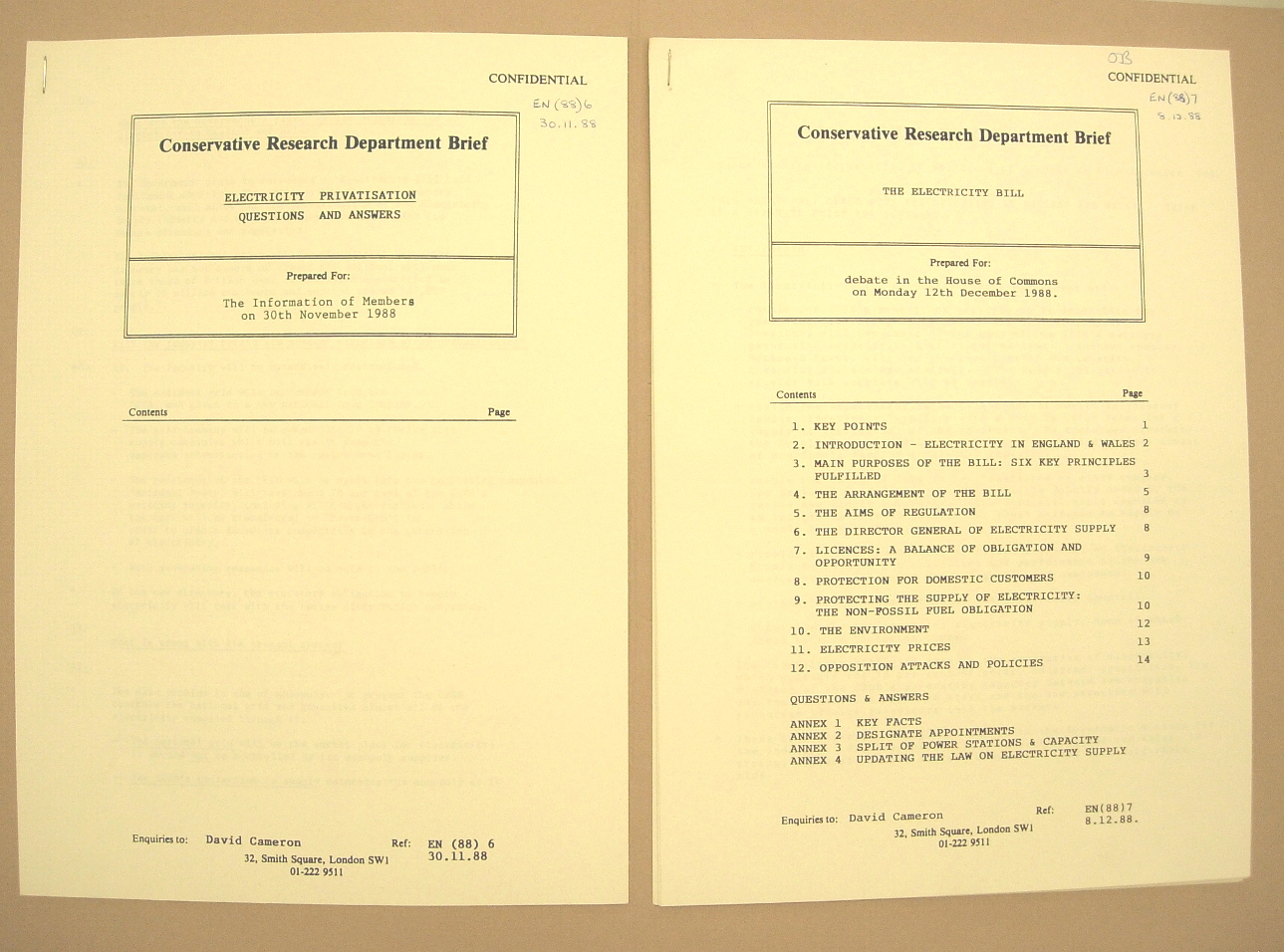 The papers and letter books of the Research Department desk officers are a unique resource for those studying the history of Conservatism. Among those files newly de-restricted for 2019 are the letter books of CRD Desk Officer Richard Marsh. Specialising in environmental policy and local government, Marsh’s papers include extensive material on the Poll Tax, and are likely to be of high value to researchers of the subject. Marsh’s papers also include a draft copy of William Hague’s election leaflet from the 1989 by-election, complete with revealing annotations – a pledge to bring in harsher sentences for criminals, for instance, is struck out and replaced with a vaguer commitment to take ‘vigorous action in the fight against crime’ [CPA CRD/L/4/40/2]. 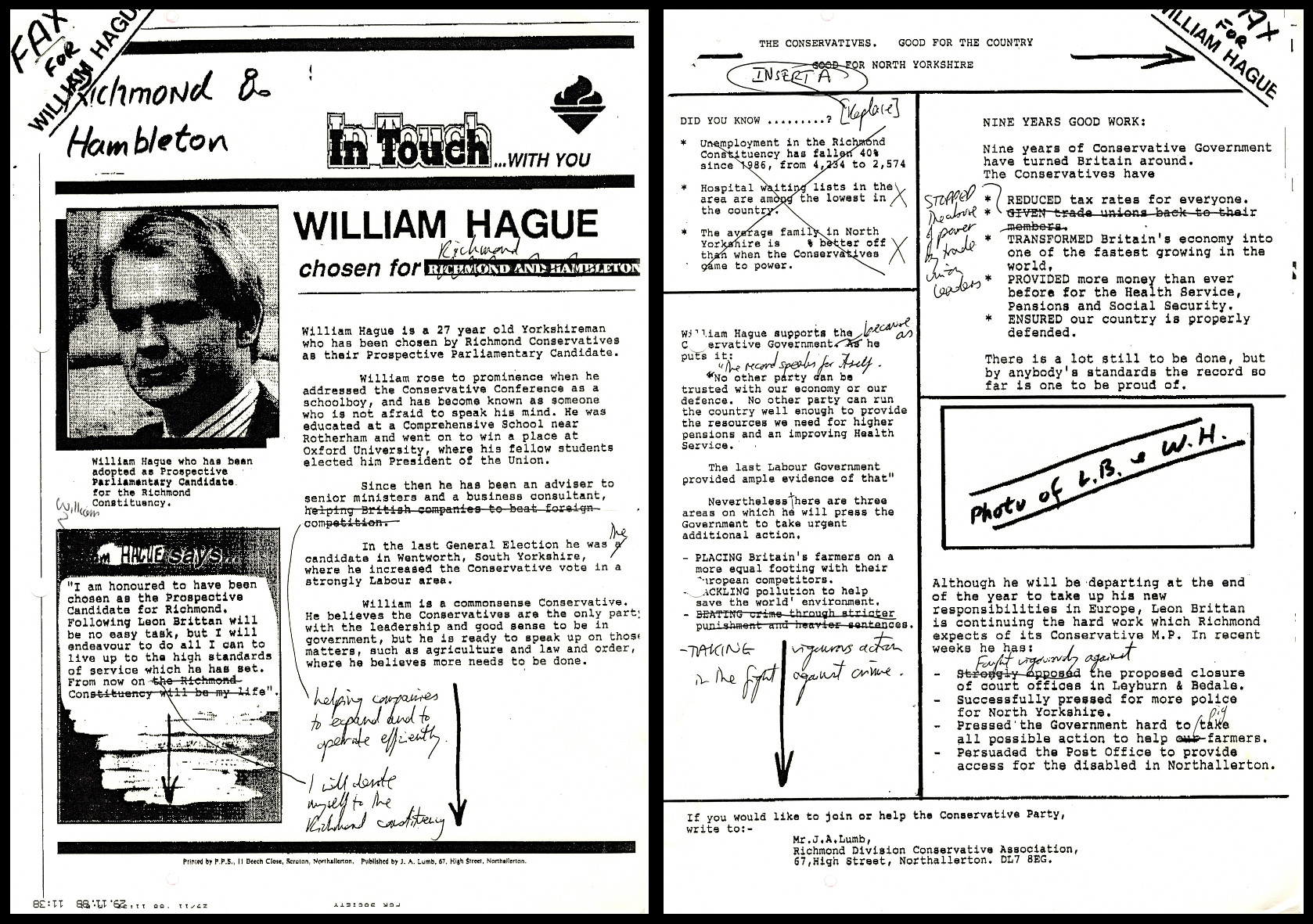 Annotated drafts of an election leaflet for William Hague, the Party’s candidate in the 1989 Richmond By-election – CPA CRD/L/4/40/2.

Finally, the records of CRD Director Robin Harris provide a rich insight into the Conservative Party during the 1980s. For instance, Harris’ letter book for August and September 1987 shows how the Research Department went about preparing material for Thatcher’s speech to the Conservative Party Conference, with draft sections of the speech and working memoranda included in the file [CRD/D/10/2/25]. 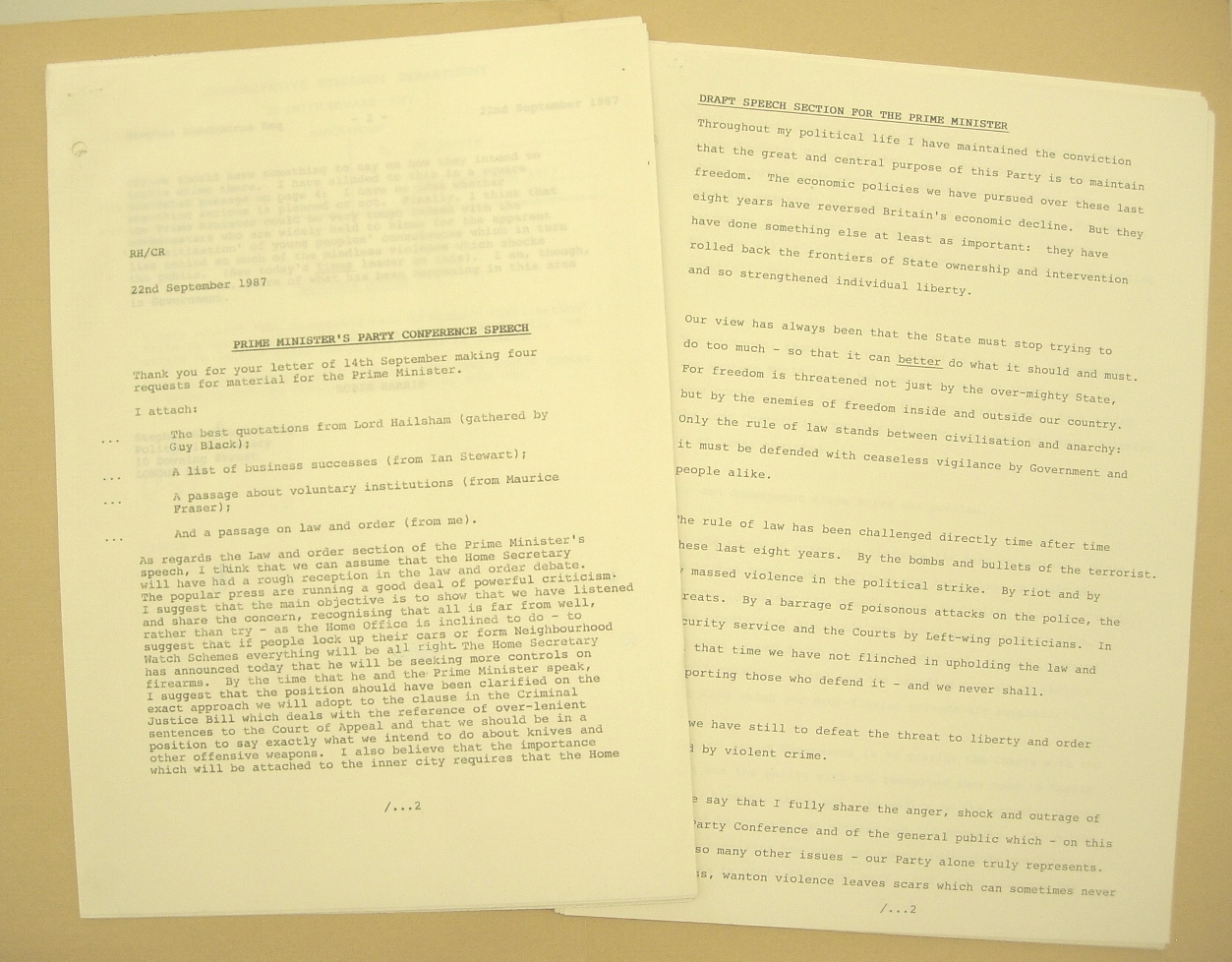 Harris’ papers also show how the Party responded at times of political crisis. During the Westland Affair, when Thatcher’s premiership was briefly seen to be threatened, the Party received numerous letters from the public calling on the Prime Minister to resign. Harris’ memo books from the time show how Conservative Central Office managed the situation, drafting template responses defending the government’s conduct [CRD/D/10/1/11]. The papers should prove to be a valuable resource for historians of the period, and we expect to be able to make further de-restrictions in this series under the thirty-year rule in January 2020. 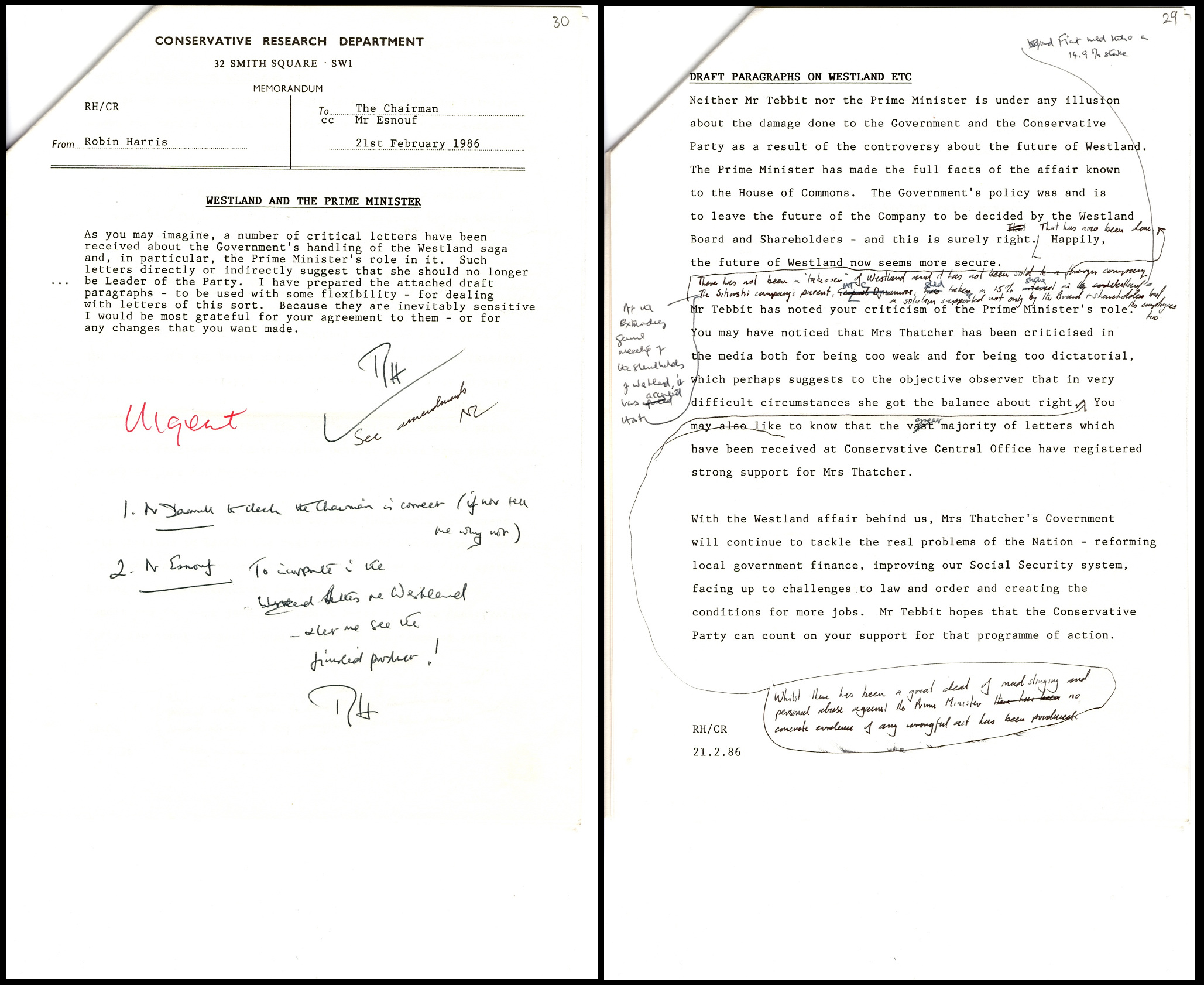 Robin Harris memoranda on the Party’s response to the Westland Affair – CPA CRD/D/10/1/11.

All the material featured in this blog post will be made available from 1 Jan 2019. The full list of de-restricted items will be published shortly on the CPA website, where de-restriction lists from previous years are also available.