Since our last post, the days have thankfully got longer and warmer. Spring has well and truly sprung in the UK. When we last encountered the Edgeworths, Maria and Honora were preoccupied by Fanny’s courtship by with Lestock Wilson (Mr L W). In an anxious attempt to remove her sister from ‘the reach of poor L W’s hopes’ in Harley Street, Maria took the family out of London to the wholesome Hampstead residence of the Carr family. Writing to her step-mother Frances in a long letter dated 1st-3rd April 1819, Maria describes Maryon Hall in idyllic terms, remarking that it had been ‘intended from the Creation for the 3 Edgeworths’. The Carrs’ family home was a place where Maria, Fanny, and Honora could at last enjoy a ‘delicious spring day in the midst of spring delights’ amongst ‘the far greater delights of a family happy as ours once was’. 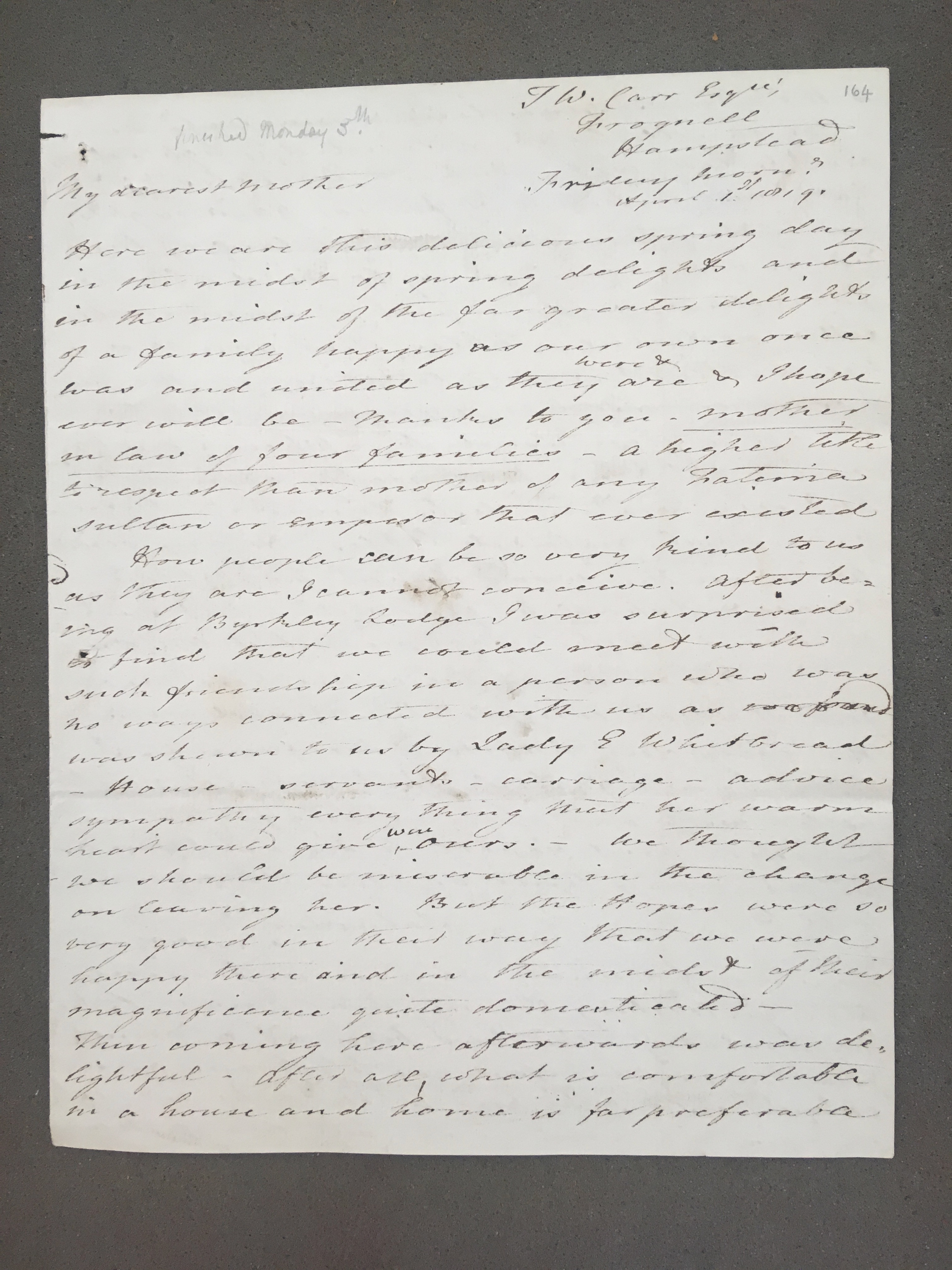 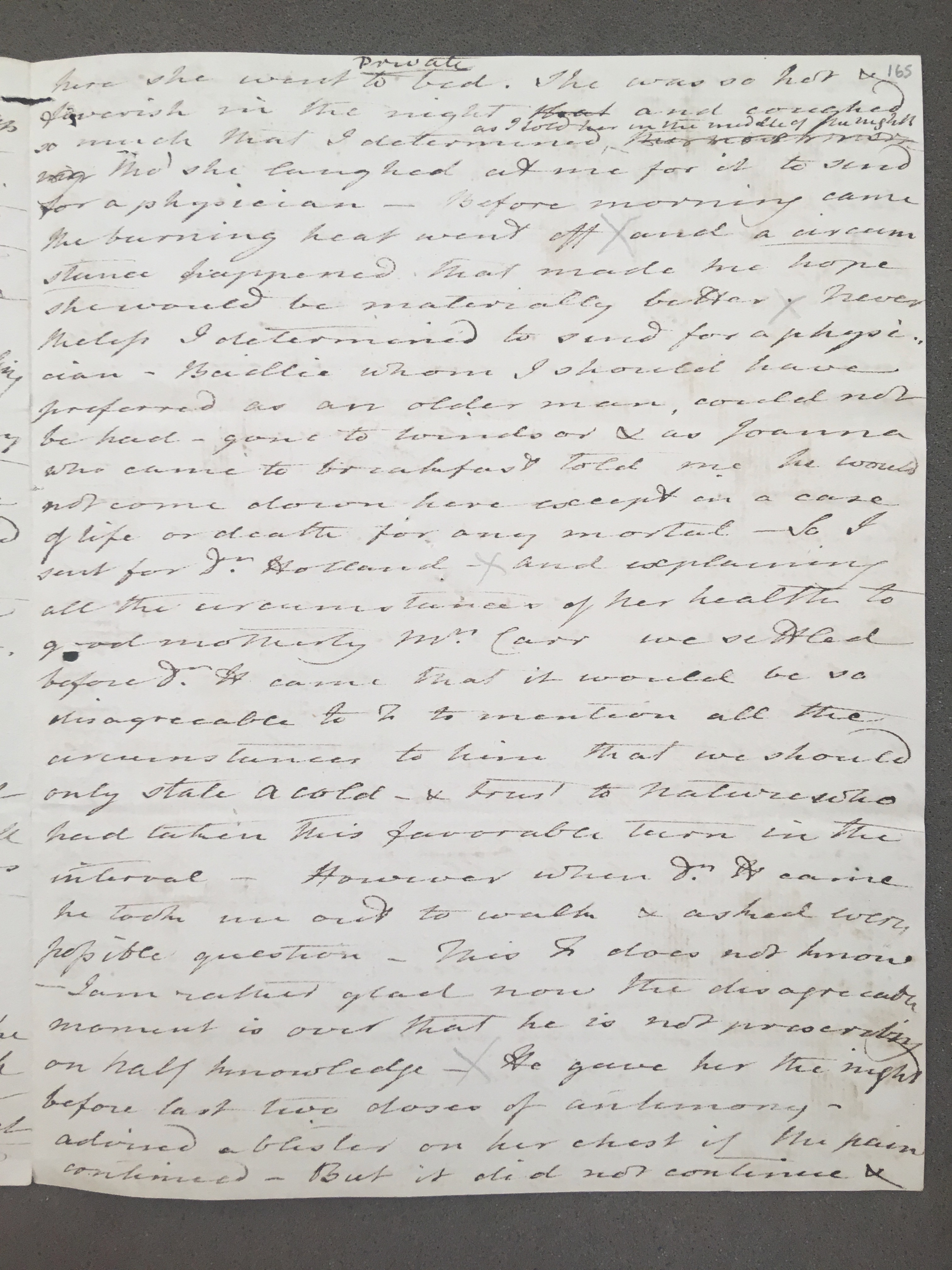 As Maria remarks in her letter, the Edgeworths were incredibly ‘fortunate […] to come’ to the Carrs ‘just at the moment we did’. Shortly after their arrival in Hampstead, Fanny fell ill with a violent cold as the result of  a draughty visit to the theatre. Maria firmly believed that Fanny’s feverish state had been brought on because she had been ‘too much harassed’ by ‘the struggle of her mind & the pain’ of deciding to reject L W’s proposal. Maria’s letter is full of anxiety as she struggles to decide on the next course of action: whether to call a doctor, whether to return to London as planned after the visit to the Carrs, and risk Fan’s further exposure to Mr. L. W.’s pursuit. As she so often does, she falls back on the advice of her (recently deceased father), Richard Lovell Edgeworth:

As my dear father used to say the great art of life is to know how to sacrifice trifles to matters of consequence. And to know what are trifles compared with great objects. 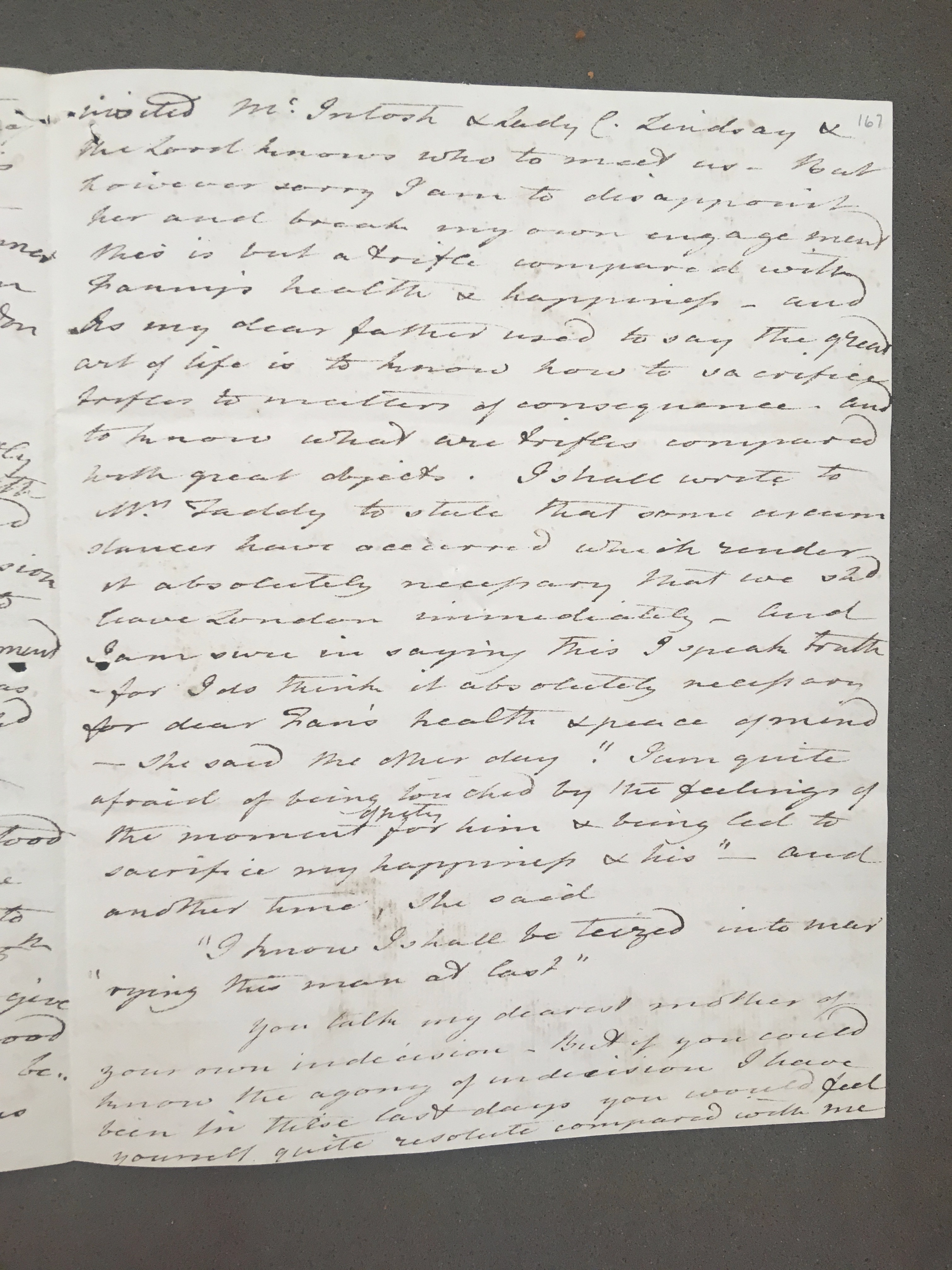 A cold may seem like a trifling illness to modern readers, who are often advised to resist visiting the GP for minor ailments. But this was not the case in the early nineteenth century. In Jane Austen’s Sense and Sensibility (1811), Marianne Dashwood nearly dies of a cold brought on when she undertakes a long walk in bad weather preoccupied with her romantic disappointment over Mr Willoughby. Like Willoughby, Mr L.W. rushed to Hampstead to be by Fanny’s side when he hears of the gravity of her illness, but he was promptly denied by the cautious Maria. The treatments prescribed by Dr Holland— an eclectic mixture of arrowroot, castor oil, and antimony-induced skin-blistering— probably did little to help Fanny recover from her illness. With enough bed rest, Fanny’s cold had passed by the end of the week. But in such a grave situation, even the smallest trifles of medical help could provide psychological comfort in a matter of such great consequence as the illness of a beloved family member. 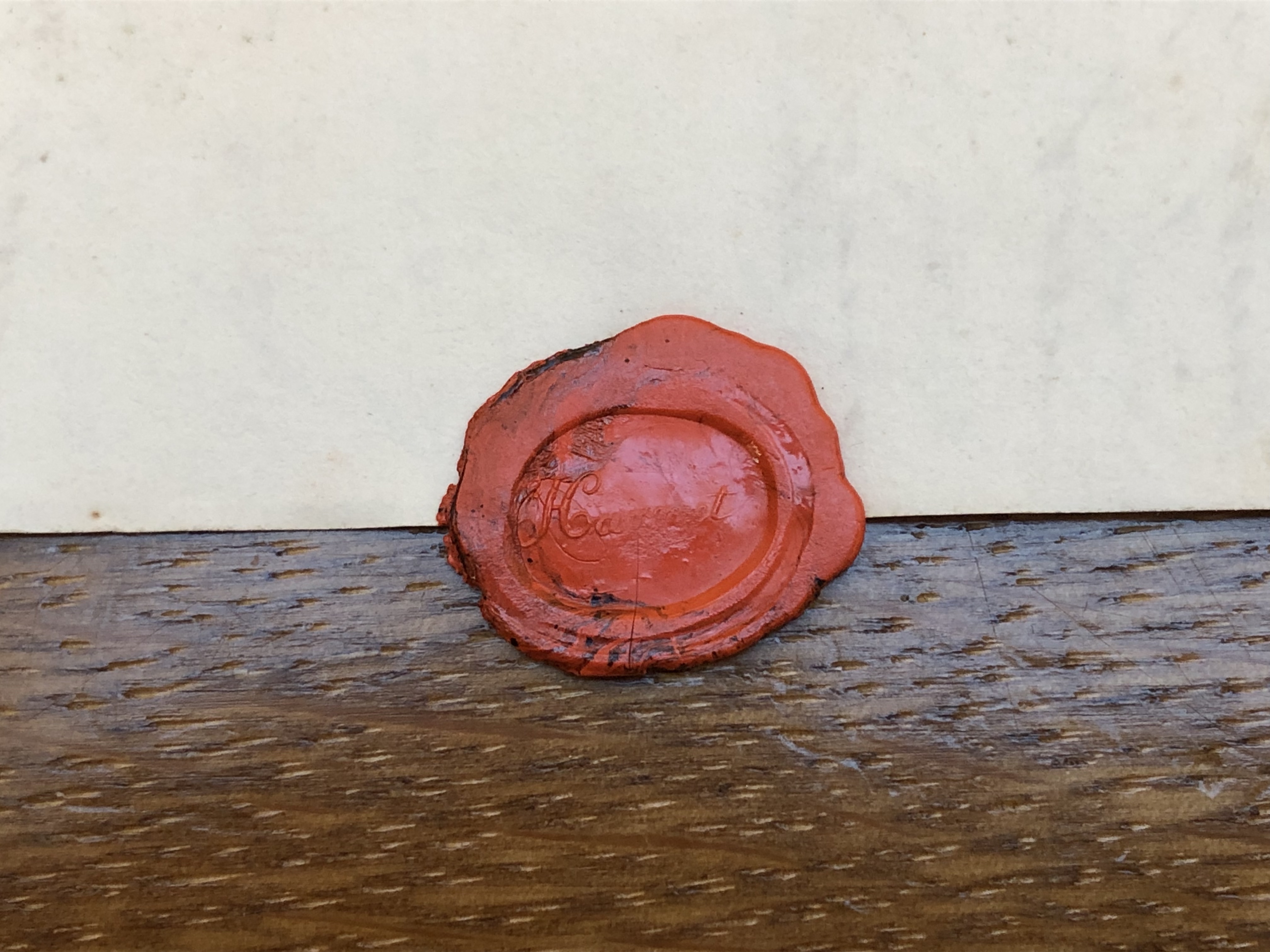 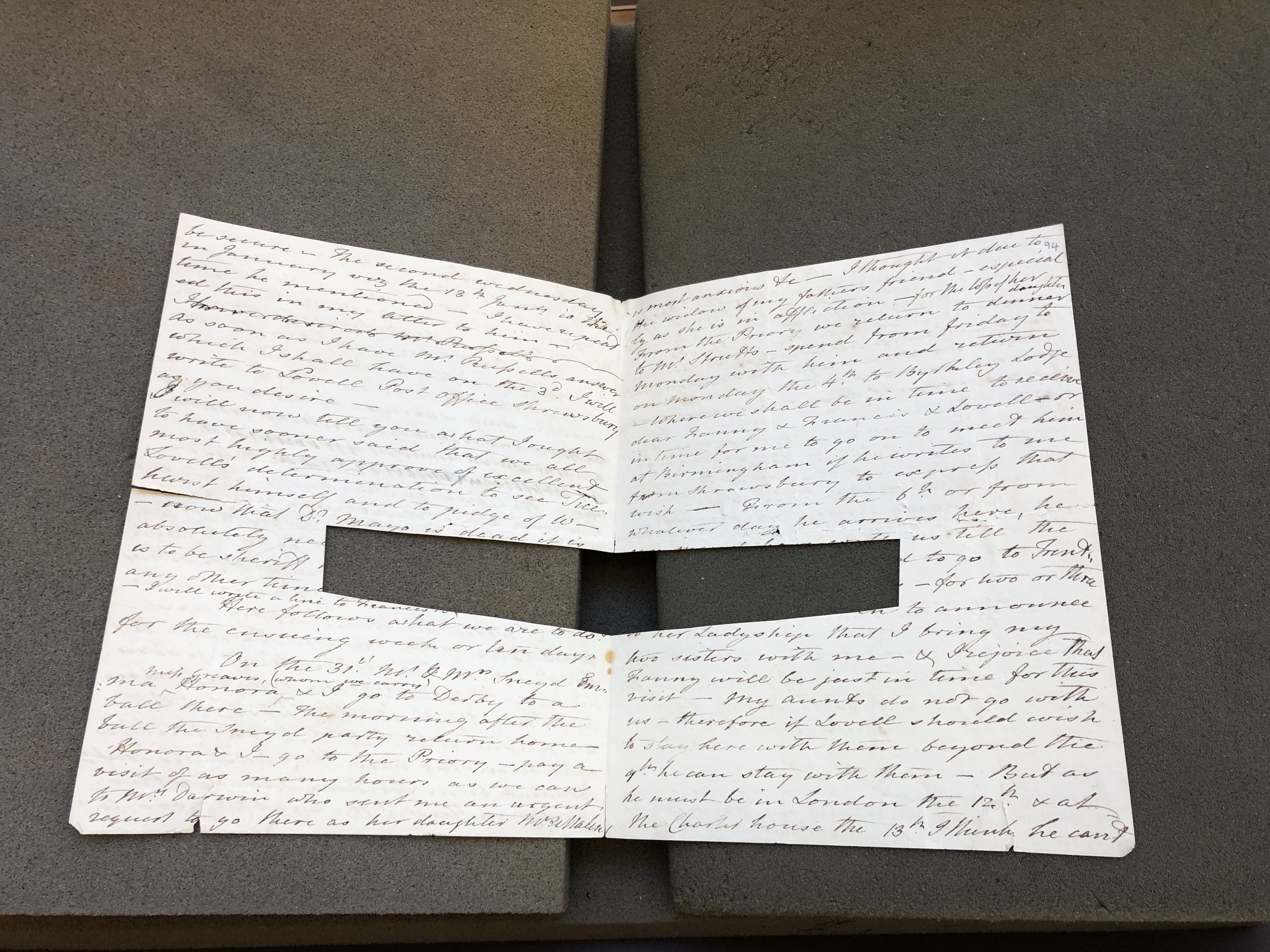 And two manuscript versions exist of a poem Maria wrote for her favourite aunt, Margaret Ruxton (1746-1830), sister to Richard Lovell Edgeworth, to accompany the gift of a ‘violet vase’. Maria’s poem captures the importance of an older woman’s care of a young girl in the ‘spring-time’ of her youth: the sort of care Maria sought to provide for her much younger half-sister, Fanny.

To my dear Aunt Ruxton with a violet vase

Here the first primrose of the year shall blow,
And violets here, their earliest sweets bestow
And the last flowret of the parting year
Shall love to leave its ling’ring sweetness here

So in the spring-time of my earliest youth
Bloomed the sweet promise of thy love & truth
So to my Life’s departing year supplies
Fragrance more rare, & bloom that never dies 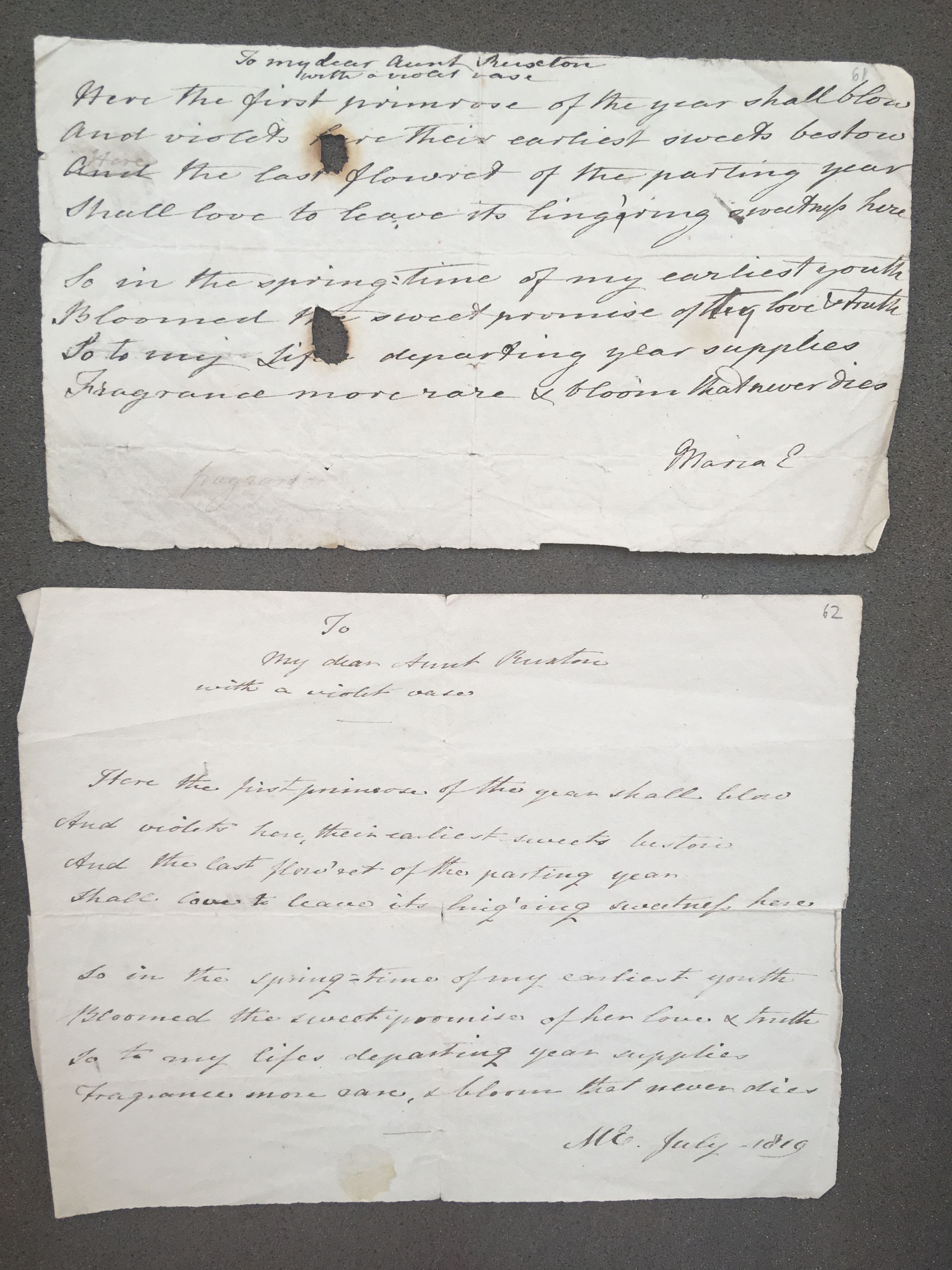 Much can be learnt from the Edgeworth Paper’s rich collection of archival titbits, and we look forward to sharing many of these intriguing fragments with you over the course of this year from one Spring to the next.

Opening the Edgeworth Papers: the team

All materials from the Bodleian Library, Oxford.

One thought on “Trifles and matters of consequence: The Edgeworths in Springtime, 1819”