July 1819 was a quiet month for Maria. Writing to her favourite aunt, Margaret Ruxton, on 7th July 1819 from Edgeworthstown (MS. Eng. lett. c. 717, fols.52-3), Maria remarked that although the perpetual scribbler within her couldn’t ‘be happy without writing a few lines’, she had ‘nothing new, remarkable or entertaining’ to relate. Her half-brother Lovell (1775-1842) remained housebound in Dublin with festering leech bites, whilst her half-sister Lucy Jane (1805-1897) was kept ‘constantly horizontal’ to hasten her recovery from treatment for a back problem. Nevertheless, Maria ‘endeavoured to amuse’ the female company at Edgeworthstown by attending different local churches to listen to sermons. She admires a debut performance and has contempt for the bombast of a more famous preacher, one Mr Burgh. She complains that some auditors do ‘not know the difference between fine sounding sentences & sense’. 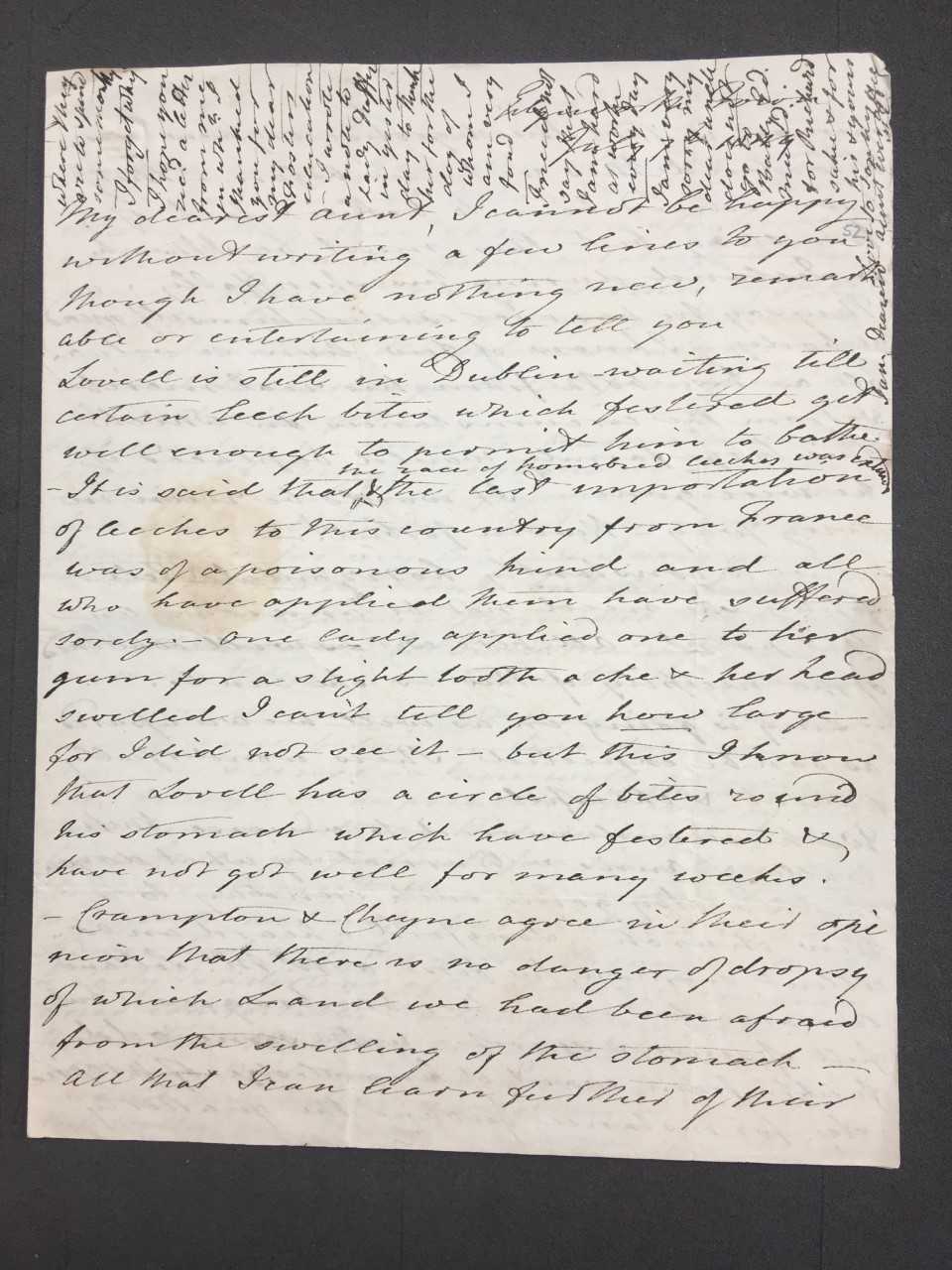 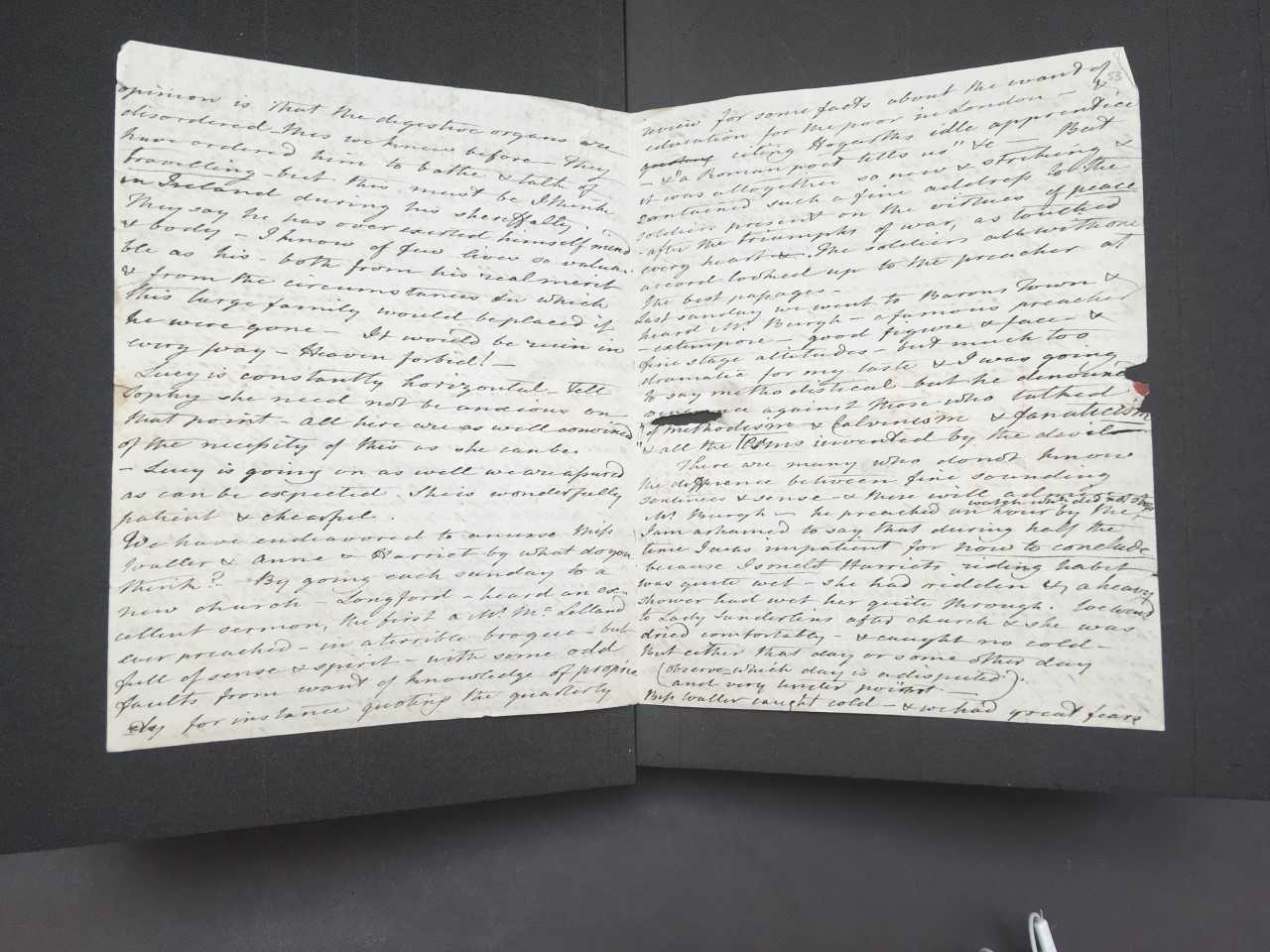 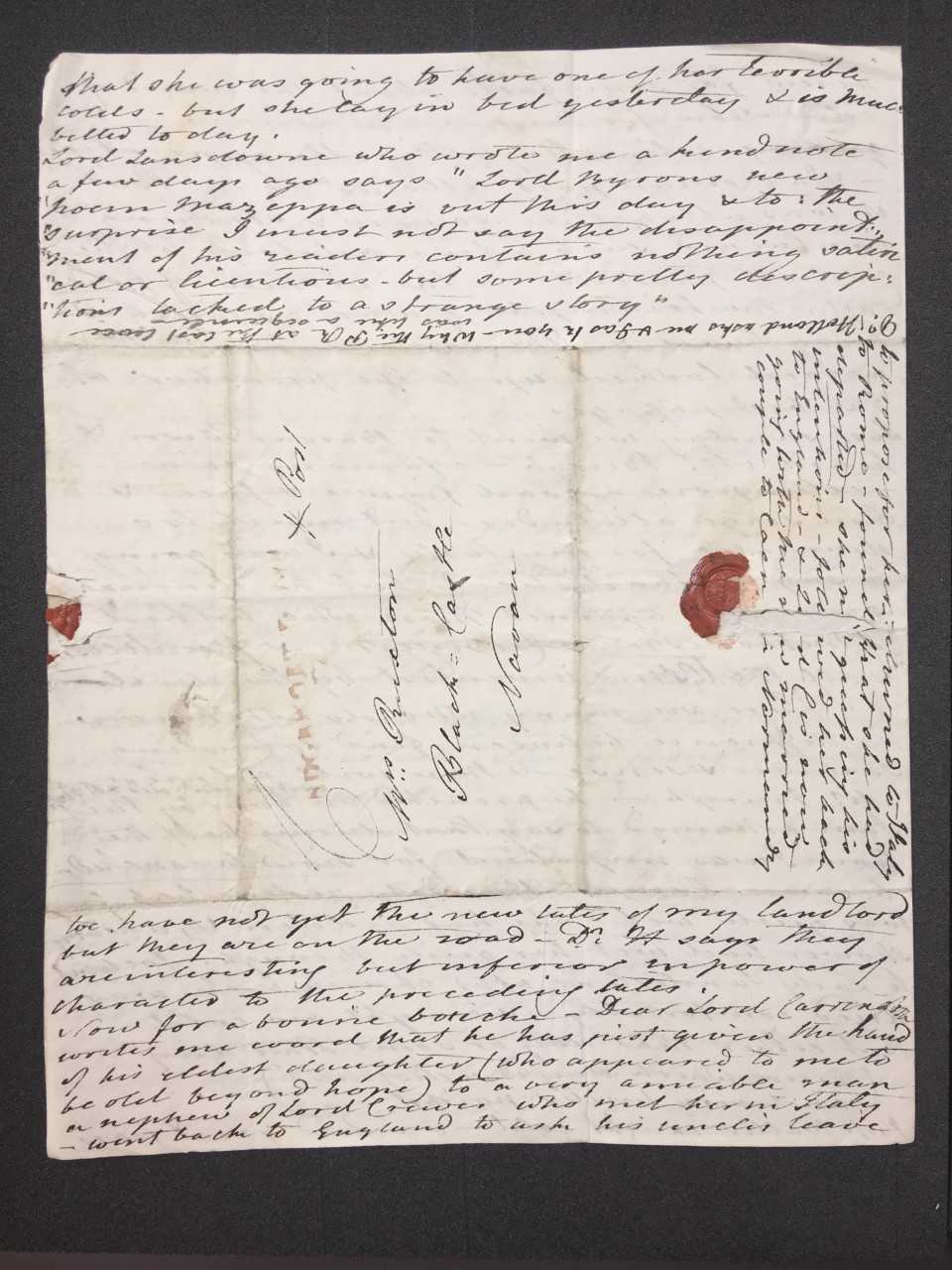 In the same letter, two male contemporaries of her own who had been much lionised in the press also attracted wry comment from her in similarly contrasting terms. In this blog we explore the judgements Maria and her contemporaries cast on each other’s work: not only the contrast between ‘fine sounding sentences’ and the solid virtues of ‘sense’, but also the different value placed on the ‘power’ of rendering ‘character’ and ‘story’. And we turn to consider the secret presence of Maria Edgeworth in our contemporary literary world.

As early as 23 October 1814, Maria had written to Sir Walter Scott, her fellow ‘national tale’ teller, to express her admiration for Waverley and the two shared a mutually appreciative correspondence (the Bodleian holds copies of letters from Scott to Maria at MS. Eng. lett. c. 720, fols. 147, 149-50). The other author mentioned in this letter, Lord Byron, she had also met but no ongoing connection was established.

Maria reports a comment in a note to her from Lord Lansdowne that Bryon’s historical narrative poem Mazeppa (1819) had disappointed readers due to its lack of satirical and licentious content. It is not clear that she herself had yet read this rip-roaring poem which draws on a Ukrainian folk tale of the punishment of the page Mazeppa for an adulterous affair with a Polish countess: Mazeppa is strapped to a wild horse and the poem ingeniously captures the relentless rhythm of the horse’s hoofs. The parallels with the circumstances of the poet perhaps did not require spelling out: Byron, afflicted by a club foot but a genius with the poetic foot, was notorious for his separation from his wife in 1816 and adulterous affair with an Italian Contessa he met in Ravenna while in exile in 1818.

The one meeting between Byron and Edgeworth took place when Byron was at the height of his fame and before his exile abroad. Maria and her father Richard met him at the London home of the chemist and inventor Sir Humphry Davy. Writing in his diary in 1813, Bryon admitted Richard, despite his ‘clarety, elderly, red complexion’, was ‘a fine old fellow’. But it was Maria who ‘every one cared more about’ and was the real literary talent of the Edgeworth family: ‘Whereas her father talked, not as if he could write nothing else, but as if nothing else were worth writing’. So impressed by her literary output, Byron admitted that Maria had managed to overshadow his reputation and popularity amongst readers: ‘I was the [literary] lion of 1812 Miss Edgeworth and Madame de Staël […] were the exhibitions’, the literary marvels, ‘of the succeeding year’. Maria by contrast comments wryly in a letter to her cousin Sophy Ruxton of May 1813: ‘Of Lord Byron I can tell you only that his appearance is nothing that you would remark’.

Bryon’s laudatory evaluation of Edgeworth’s literary prowess is fairly typical of her contemporary readers. Scott nicknamed her ‘the great Maria’. In this letter we see Maria beginning to mitigate her enthusiasm for Scott’s works, again through the vehicle of the report of another male correspondent. She is awaiting a copy of the third series (1819) of Scott’s Tales of My Landlord which comprised ‘The Bride of Lammermoor’ (now considered one of his finest achievements) and ‘A Legend of Montrose’. ‘Dr H’ (possibly Dr Peter Holland (1766-1855), a regular correspondent although his letters to Maria have not yet been found), she reports, says they ‘are interesting but inferior in power of character to the preceding tales’.

Maria may have preferred Scott’s ability to generate exciting and involving plot to the ‘power of character’ now recognised as the main achievement of another contemporary who placed her alongside Scott and Byron in a pantheon of literary greats. Despite her marginalised position in the modern literary cannon, Maria was once the UK’s most commercially successful novelist, as evidenced by the enthusiasm of other writers such as Byron to meet with her and the extraordinary record of income Maria Edgeworth meticulously recorded in September 1842: £11,062, 8s and 10 pennies (conversion to income now is some £668,332.85) . Compare the modest lifetime earnings for her fiction of £630 by Jane Austen (1775-1817).

Like Byron, Austen held Maria’s works in high regard. Writing to her niece Anna in 1814, herself an aspiring author, Austen went as far as to remark that ‘I have made up my mind to like no novels really but Miss Edgeworth’s, yours, and my own’. Austen continued to praise Edgeworth in her fiction. In Northanger Abbey (1818), she lauded Edgeworth’s controversial novel Belinda (1801) – along with Frances Burney’s Camilla and Cecilia – as works ‘in which the greatest powers of the mind are displayed, in which the most thorough knowledge of human nature, the happiest delineation of its varieties, the liveliest effusions of wit and humour, are conveyed to the world in the best-chosen language’.

Although an attentive reader of Austen’s works, Edgeworth’s opinion of Austen was mixed. In a letter to her cousin, Sophy Ruxton, of 26 December 1814, Maria comments that the family had been ‘much entertained’ by Austen’s previous work, Mansfield Park (1814). But much like Sir Water Scott, Edgeworth found Emma (1815) lacking in substance and gave up on it after one volume. Writing to Aunt Ruxton on 10th January 1816, Maria relates how she was grateful to receive a copy of the novel from the ‘authoress of Pride and Prejudice’ herself. Edgeworth was probably flattered by the kind gift—it was after all the only copy of Emma to presented by Austen to another author. But in a cutting review in a letter written later that year to her half-brother, Charles Sneyd Edgeworth, Maria complained that the novel lacked plot: ‘There is no story in it, except that Miss Emma found that the man whom she designed for Harriet’s lover was an admirer of her own—& he was affronted at being refused by Emma & Harriet wore the willow—and smooth, thin water-gruel is according to Emma’s father’s opinion a very good thing & it is very difficult to make a cook understand what you mean by smooth, thin water-gruel.’ 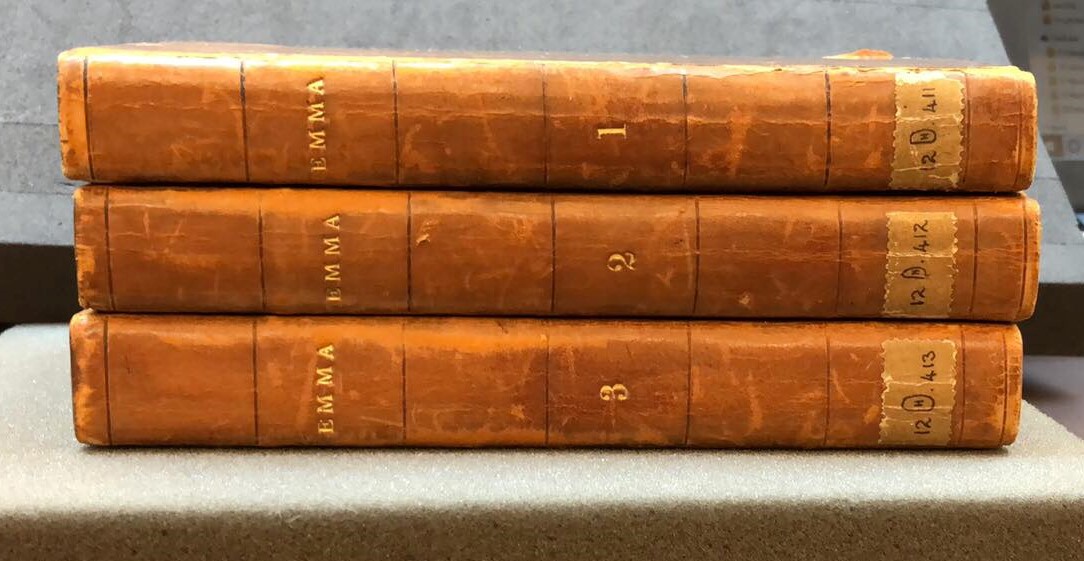 Nonetheless, Maria choose to keep her copy of Emma amongst the books housed in the family library at Edgeworthstown— a savvy decision, given that just two of the three original volumes Maria owned of Emma sold at auction in 2010 for £79,250. The new owner is in good company in owning only a partial set. A letter from Maria and Richard’s publisher in the Bodleian evidences, Maria’s gift text of Emma was not the only copy housed in the Edgeworth’s library (MS Eng. Lett. c. 722, fols.29-30). On 4th September 1816, Rowland Hunter wrote to Richard to inform him that he had just sent ‘a brown paper parcel’ filled with books to Ireland via Liverpool. Amongst the latest multi-volume memoirs (John Harriott’s Struggles Through Life (1807) and Memoirs of the Somerville Family (1815)), scholarly reference works (William Nicholson’s A Dictionary of Practical and Theoretical Chemistry (1808)), and writing supplies (18 pencils) was bundled a single novel— the first volume of Austen’s Emma. Whilst Edgeworth had despaired at the first volume, nearly a year later, Richard appears to have gone out of his way to order his own personal copy of the very same volume from his London bookseller. 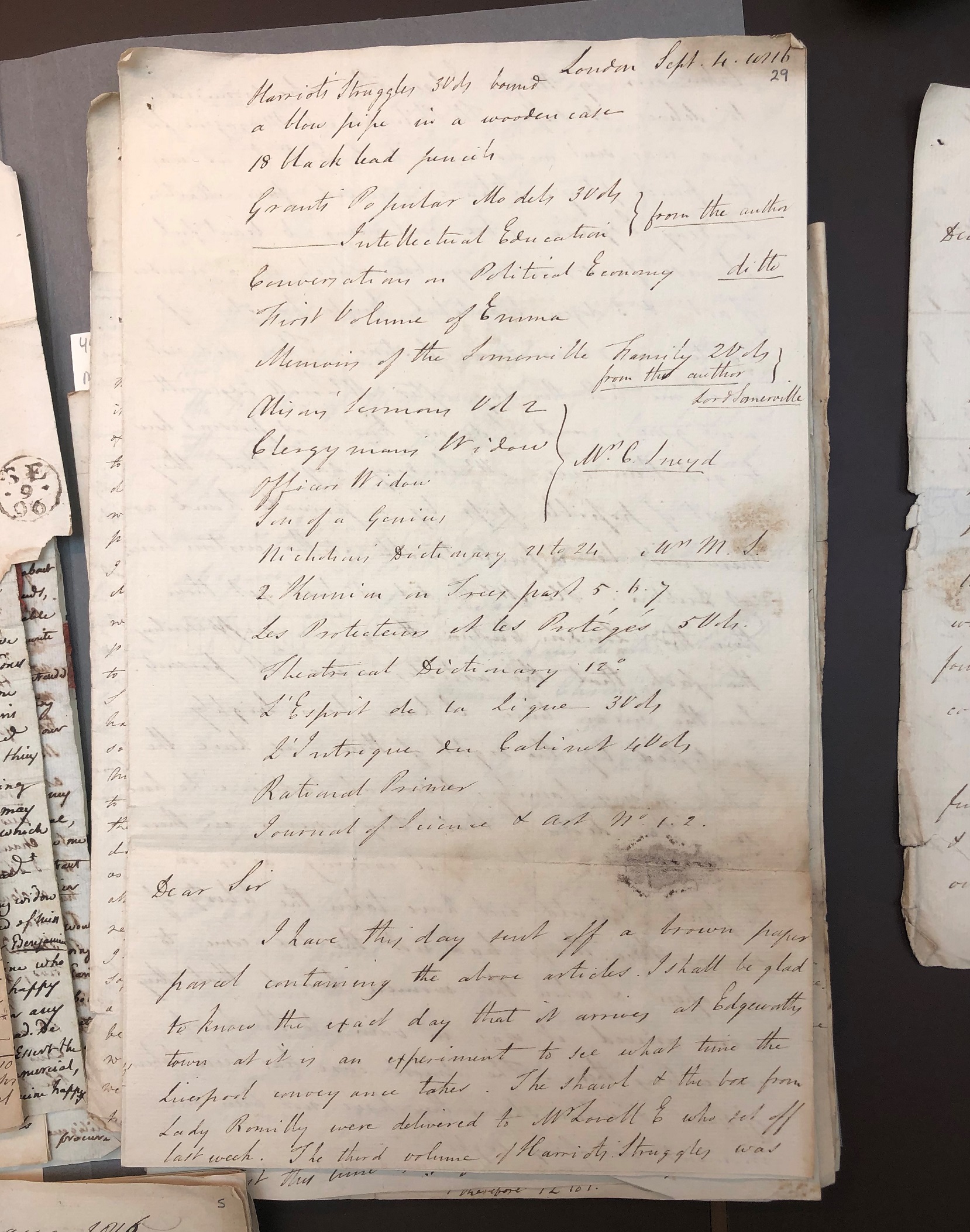 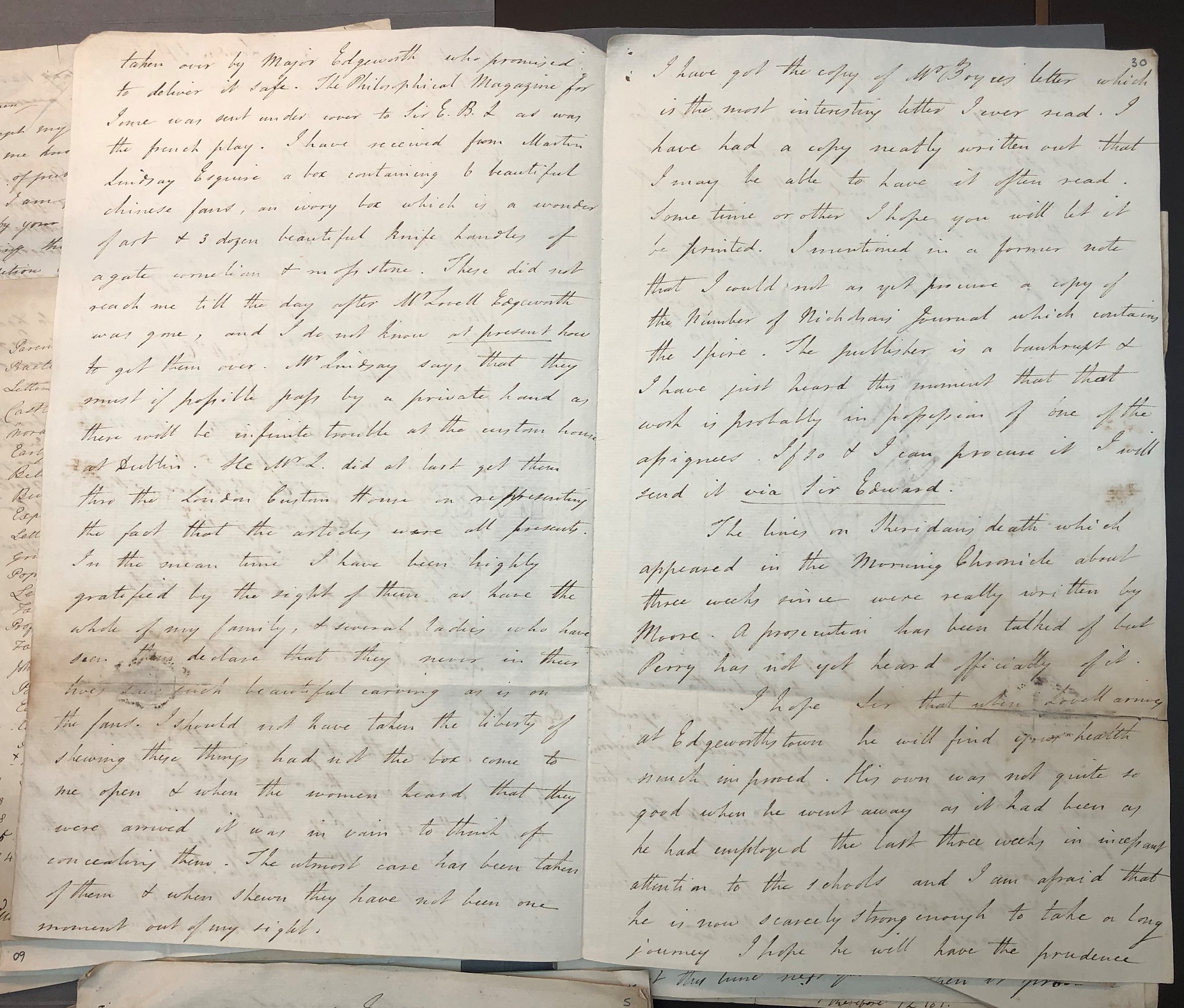 Austen’s reputation would eventually out-shadow that of both Richard and Maria Edgeworth as well as Maria’s fellow lioness, Germaine de Staël. The growth of Irish nationalism, coupled with less enthusiasm for female authors and characters outspoken in their political opinions in the popular form of the novel, caused Maria’s literary popularity to decline from the 1830s onwards. By 1909, Virginia Woolf found herself asking ‘whether people now read Miss Edgeworth’s novels’.

Despite her declining appeal to readers, Maria’s work has continued to inspire important works produced by subsequent generations of literary lions and exhibitors. Castle Rackrent (1800) remains a touchstone, albeit an ambiguous one, with secrets hard to disclose. An apparently slight reference to Castle Rackrent in F. Scott Fitzgerald’s The Great Gatsby (1925) unfolds a wealth of potential meanings. Daisy asks the narrator Nick Carraway
‘Are you in love with me,’ she said in my ear, ‘Or why did I have to come alone?’, to which he answers ‘That is the secret of Castle Rackrent’ (chapter 5). Of Irish descent, Fitzgerald may simply have been invoking an affinity between his own unreliable narrator, Nick and the famously unreliable narrator of Edgeworth’s novel, Thady Quirk. Thady is steward to four generations of variously ineffectual Anglo-Irish landlords of the Rackrent estate: see the sketch by Maria’s half-sister Honora Edgeworth (1791-1858) of Thady with his favourite master, Sir Condy, a child at his knee (MS Eng 901, fol.108). The ‘secret’ revealed at the end of the novel is that the improvident Sir Condy has entailed a jointure of £500 each year on his wife. Jason Quirk, the aspirant son of Thady and manager of the estate, is poised to seize the whole and is enraged but nonetheless forces Sir Condy to sign over his estate in a deed while Thady looks on and weeps. Thady’s loyalties, like Nick’s, are always murky: we cannot tell whether they are to the ruling classes, the women abused or pursued by those men, or the outsiders/bootleggers who aspire to take their place. The ‘secret’ of such stories, the famous ambivalence of the ‘Irish bull’, stays with these never-fully-revelatory narrators. 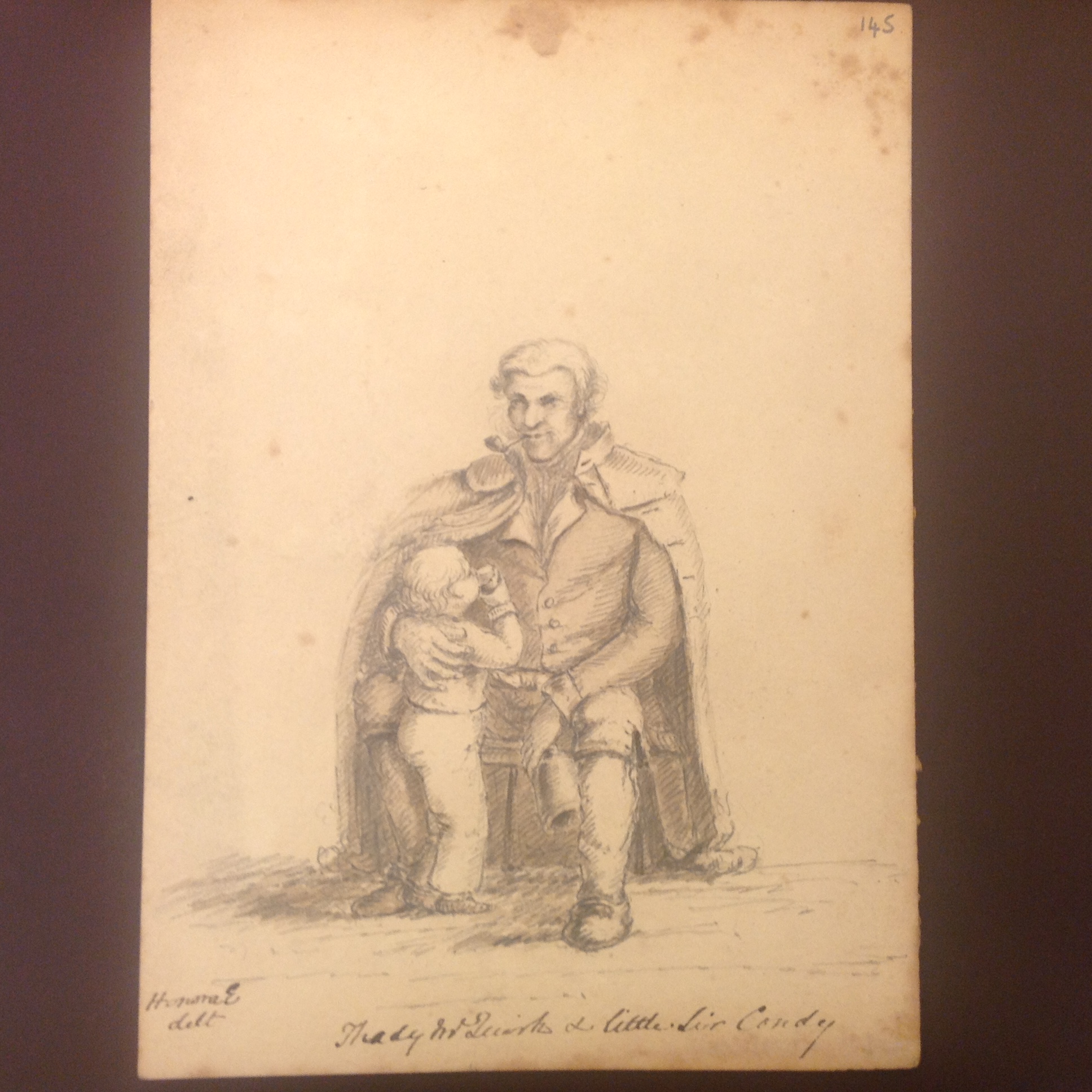 A modern equivalent of this ambivalent exposure of abuse of power and resistance to it first captured in Castle Rackrent can be found in the bookish heroine of Anna Burn’s 2018 Booker prize-winning Milkman. ‘Middle sister’ decides not to take Castle Rackrent with her on her evening walk when she is ‘too buzzy to read’. She ponders instead ‘teacher’s’ words about sunsets every day and the imperative to ‘uncover what we’ve kept hidden, what we think we might have lost’.

Maria’s other works are secret pleasures for many writers in the know. Antony Trollope used the plot of The Absentee (1812) in his Hibernian novel The Kellys and the O’Kellys (1848). Poems by Eiléan Ní Chuilleanáin (‘Maria Edgeworth in 1847’) and Vona Groarke (‘Patronage’ 1994) invoke the labour of the woman writer and the threads of influence and affinity across Irish and English kin and cultures her work generates. Mark, the callow hero of Belinda McKeown’s Solace (2011) is writing a thesis on Maria Edgeworth at Trinity College, Dublin. Over two-hundred and fifty years after her birth, despite her decline in mainstream popularity, Byron’s great if reluctant literary exhibitionist continues to inspire writers and delight readers through her displays of authorial prowess.