When we last encountered the Edgeworths, Maria and her half-sister Fanny were busy discussing transcultural literary exchanges between Ireland and France with their sister-in-law, Henrica. Writing jointly once again to their cousin Sophy Ruxton in October 1819, the sisters communicate snippets of domestic and society news (MS. Eng. lett. c. 718, fols.179-82). They comment on the health of family members (see our April blog). They compliment the good behaviour of Maria’s beloved doggo Foster (subject of our June blog) who has won the affections of their housekeeper Kitty Bellamore (see the water-colour drawing in the family papers, MS. Eng. Misc. c. 901, fol.5). They return at several points to report on the live events as their brother Lovell attempts to counter bullying in a local election campaign over which he was presiding as sheriff. Maria refers to the poem she wrote for her aunt to accompany a violet vase (see our April blog) and to a drawing Fanny made of their two younger brothers, Francis and Pakenham, possibly the one dated 1818 in the collection of family pictures (Francis reading to his brother Pakenham, Ms. Eng. Misc. c. 901, fol.32). But the most distinctive feature of the letter, and the focus of this blog, is that the sisters endeavour to bring their cousin up to speed on the latest society gossip — from substantial anecdotes included in the body of the letter, to a short list of ‘stray bits of scandal’ notes on the back to save paper. 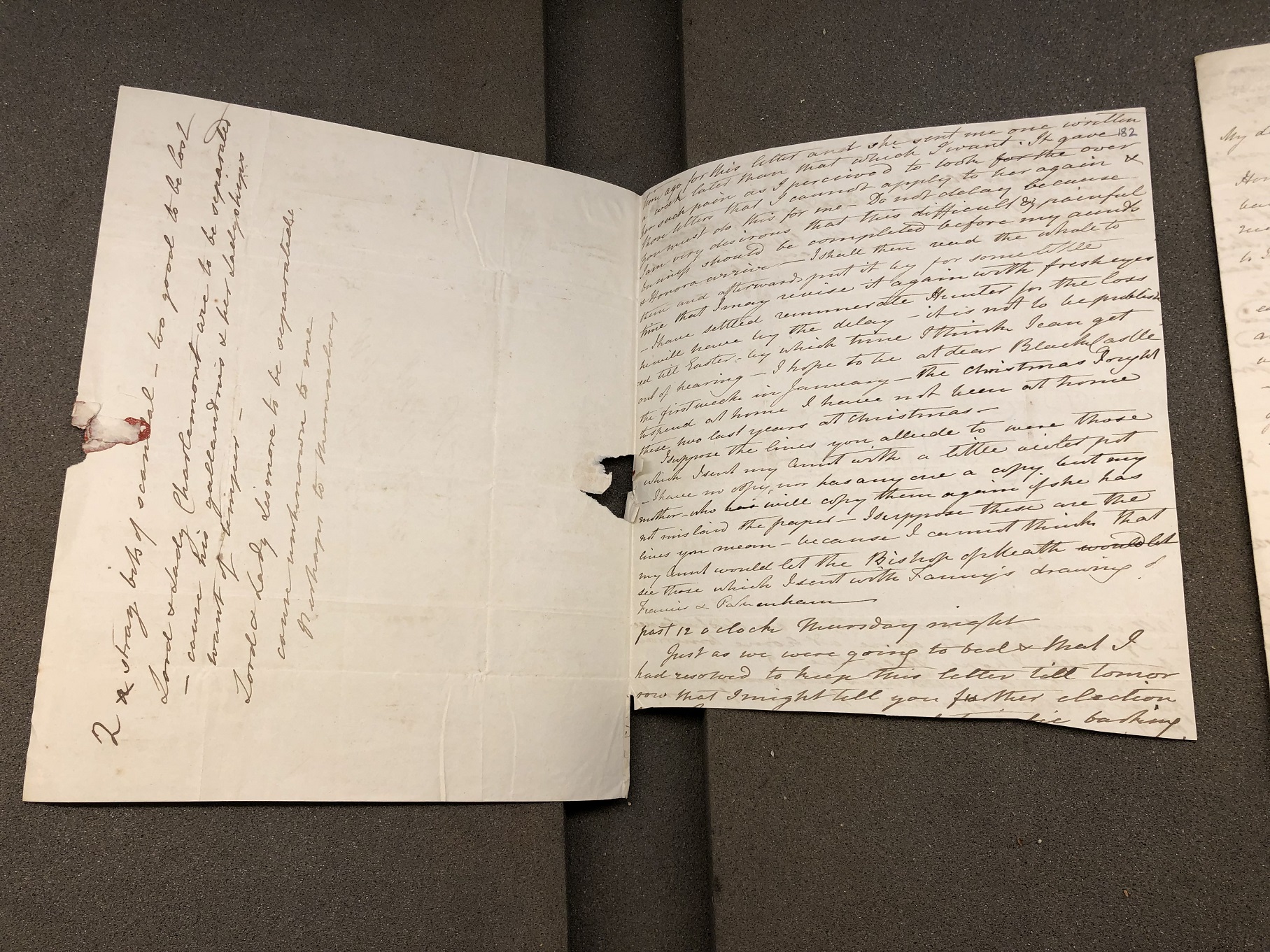 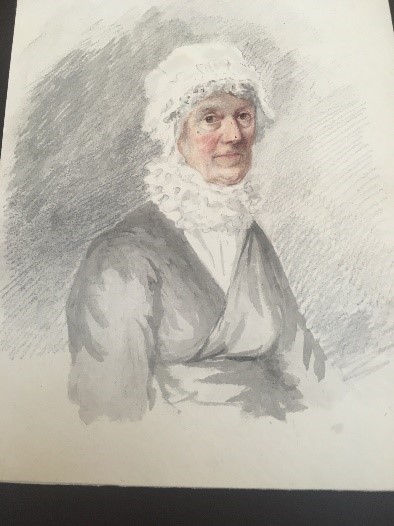 Maria lived in a society that was filled with scandalmongers; gossip circulated through correspondence and newspapers as well as speech, and it is the subject of many plays and novels. In her final novel Helen (1834), Maria describes Lady Katherine Hawksby and her set of high society London ladies as so addicted to scandal that they consume more gossip than they drink tea. Throughout her published oeuvre, Maria condemns this habit of reputation-damaging scandalmongering. In her short stories “Angelina” and “The “Catastrophe” from Moral Tales (1801), for example, Edgeworth argues that gossiping about scandals was for idle individuals ‘who have nothing [more] to do or say’ than to cause people misery—a ‘buzz’ to temporarily occupy their attention for a few moments, before a new object of their spiteful entertainment attracted their attention. Away from her instructional fiction, however, Maria tows a more blurred line on the subject. Writing to the Scottish poet and playwright Joanna Baillie in 1825, Maria begrudgingly admitted to the necessity of scandal: ‘I hate scandal but truth is truth.’(1)

Yet in this letter, the Edgeworth sisters seem to be as ravenous to be simply entertained by gossip as Lady Katherine Hawksby and her set in Helen. Writing to their cousin, the sisters delight in revealing that ‘they can tell you more than you know’ about the morals of the Byron-reading John Wolfe, Viscount Kilwarden, and remark how they ‘long to be sitting on the sofa – and to hear what I am sure will be an entertaining chapter of Saints & Sinners’. There is a distinction between the private exchange of interesting news between family members and the circulation of information that put at risk public reputation.

One of the most scandalous chapters in the life of a rich married couple in the early nineteenth century was divorce. Prior to 1857, the only way by which a couple could get divorced was through a Private Act of Parliament introduced in 1700. This was an expensive and highly public process and was only granted as a last resort on the grounds of adultery and extreme cruelty. Indeed, between 1700 and 1857, only 314 divorces were granted by parliament, though of course many more did separate without pursuing divorce. Despite divorce’s scandalous connotations, Maria was sympathetic in her treatment of Lord and Lady’s Glenthorn’s mutual desire for a divorce in her earlier novel Ennui (1809). Yet in this letter, the Edgeworth sisters revel in the scandal associated with marital separation:

Here, Maria and Fanny treat the latest separations of society couples as delicious pieces of gossip to be shared and consumed with their cousin. With divorce such a rare occurrence, any instances of separation for ‘gallantism’ (adultery), ‘want of temper’ (patience), and even unknown causes are deemed ‘to[o] good to be lost’. Yet the sisters choice to wedge their ‘stray bits’ onto the reverse of letter suggests an attempt to chirographically preserve their gossipy gleanings from being lost.

The sisters contrast the ‘want of temper’ of a contemporary society wife, Ann Caulfield, with their admiration for the virtue and patience of another woman they have been reading about, Rachel Wriothesley, Lady Russell (1636–1723), in Some Account of the Life of Rachael Wriothesley Lady Russell (1819) by Mary Berry:

The wife of William, Lord Russell (1636-83), Rachel was greatly admired for her piety, matrimonial devotional, and stoicism in the face of adversity after the execution of her husband for his involvement in a Whiggish plot against King Charles II. Indeed, in Maria’s educational tale Rosamond (1821), the titular heroine goes as far to claim that Russell remained the most celebrated woman in all of Europe: “Who is there in our own Country, or France, or Italy, or Spain—in any country; what celebrated woman can you name, who can stand comparison with Lady Russell?”. 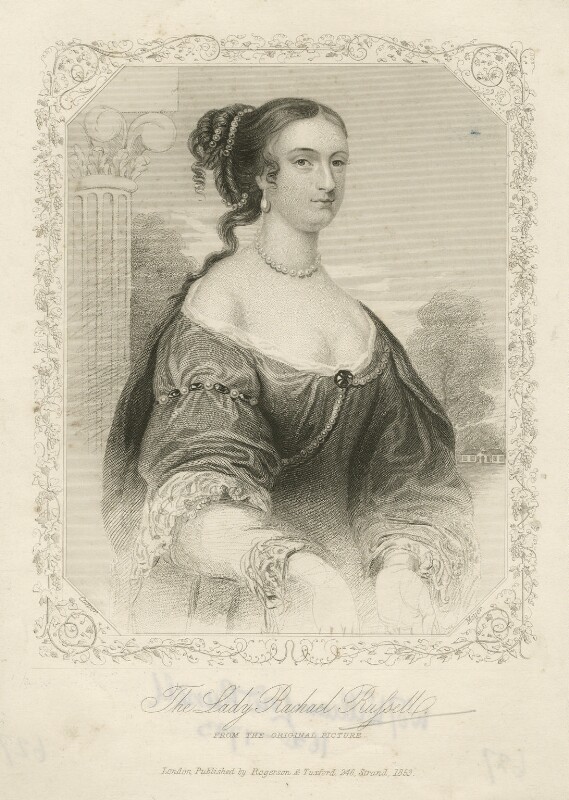 The letter remains diplomatically silent about the reputation of the author of this biography, Mary Berry (1762-1853). A companion of Horace Walpole, Berry’s career as an author begin with the failure of her scandalous comedy of manners. Despite its stellar cast of prominent actors, and its success as a private theatrical, The Fashionable Friends (1801) was withdrawn from the Drury Lane theatre after two performances, its content being apparently too risqué for further performance: it included reference to secret extra-marital affairs and an excessive display of romantic attachment between two women (Mary Berry herself and her friend the celebrated sculptress, Anne Damer). The lack of comments on Berry’s scandalous literary beginnings may be due to the fact that the Edgeworth family were acquaintances of the Berry sisters (Mary and Agnes), with whom Maria corresponded from 1813 onwards. 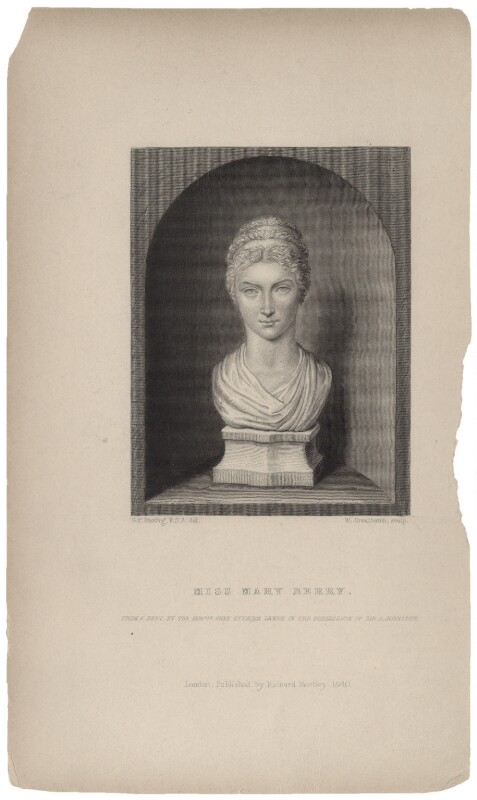 Fanny and Maria tell Sophy Ruxton that they are enclosing ‘two or three agreeable letters for your amusement’. Letters were often read by individuals other than their intended recipients for entertainment. But they were also read for moral improvement: as Mrs Egerton remarks of Lady Russell’s letters in Rosamond, ‘looking up in early youth to a high character exalts the mind, and gives the best promise of future excellence’. Rather than condemn Berry for her scandalous beginnings, much like contemporary reviews in the periodical press, the author and editor is praised by the sisters for the careful editing and circulation of Russell’s previously unpublished letters. The Edgeworths knew about and valued the importance of careful editing. In this same letter, Maria makes reference to her own patient editorial endeavours tracking down material to include in her ill-fated Memoirs (1820) of her father Richard Lovell: ‘I must beg of you my dear friend to look among my letters […] I am now come to the last of what I am writing and want to be certain of the accurate recollection of some <> expressions of his’. Viewing Berry not as the salacious author of Fashionable Friends, but as an editorial comrade-in-arms, Maria demonstrates how stray bits of scandal could be conveniently lost and forgotten if it suited a writer— as well as countering the tendency to see women as the vehicles of idle gossip and dangerous scandal by celebrating women’s contribution to the promotion of scholarship through editing and memorializing significant figures of the past.