…how wonderful that little black marks made on paper can make thoughts jump & hearts jump too at ever, or never so great a distance

Despite our 200 year distance from the Edgeworth papers, we have the same experience reading this letter from Maria Edgeworth to her cousin Sophy Ruxton of 5 November 1819 as Maria herself describes. Maria was an expert in making thoughts and hearts jump and she understood the curiosity that drives all readers from the earliest age to acquire knowledge and immerse themselves in strange experiences. Maria, you may remember, had been instructed to rest her eyes for some time and her sister Fanny was writing letters on her behalf, but she records now that she is now ready to read again:

Now that I have a little time & eyes to read again I find it delightful — And I have a voracious appetite and a relish for food good bad & indifferent I am afraid like a half famished ship – wrecked wretch, an appetite quite unknown <to> those who eat their daily literary meals and go to their regular monthly feasts and festivals & grow nice & fastidious & eat the best bits turning up their nose & vowing they can’t touch a bit more.

Evidently invigorated and hungry for all kinds of literature, she writes about her extensive and eclectic recent reading. She mentions her plans to send The Poems of Mr. Hunter and the Letters of Lady Russell to Sophie’s home at Black Castle; that she has been reading the 4th volume of Frederick Lillin de Chateauvieux’s 6 volume New Voyages and Travels, Marshal de Bassompierre’s Memoirs of the Embassy (first published in 1626 and translated by John Wilson Croker in 1819), and November’s Quarterly Review. Besides her reading, she also casually mentions in the opening passage a letter from fellow writer Joanna Baillie, which she will send on (a reminder that familiar correspondence was not ‘private’ as we would understand it today). Maria does not only share her reading, but offers to share the texts themselves, an indication of the level of literary traffic between Edgeworthstown House and Black Castle. 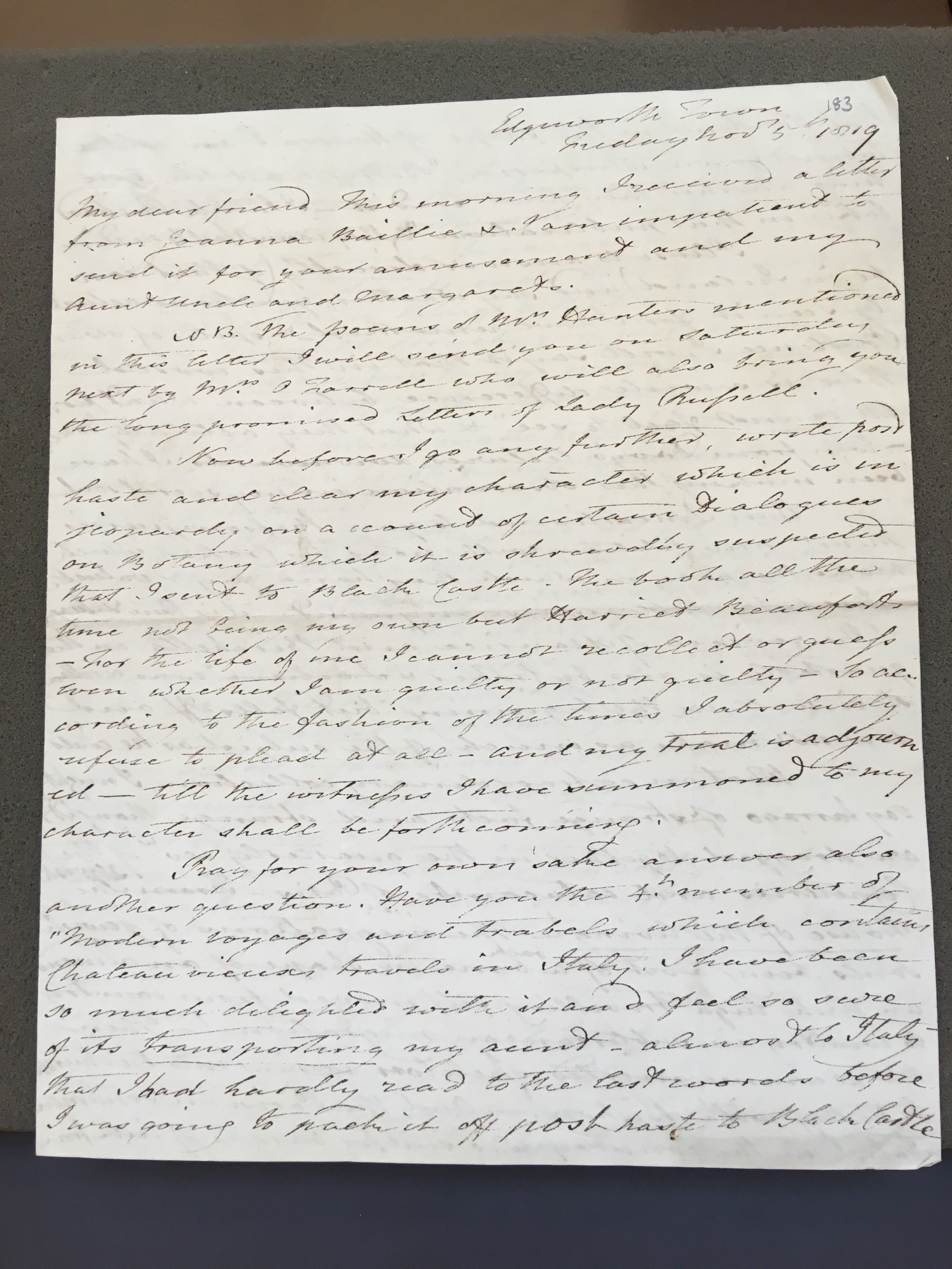 The ‘little black marks’ that dart across the page do more than record Maria’s voracious reading habits; they also demonstrate Maria’s curiosity about a range of topics. We have written in previous blogs about her global outlook; her interconnectedness with the rest of the world forged through travel, friendship and the publication (and translation) of her works around the world. Her reading too gave access to a world beyond Edgeworthstown, particularly the reading of periodicals. The Quarterly Review ran from 1809 until 1967, was published by John Murray (who also published works by Austen, Byron and Scott amongst others) and was set up to rival the Edinburgh Review taking a liberal-conservative position conducive to Maria’s own politics.

Maria is not overexaggerating when she describes the ‘farrago of strange facts and strange thoughts [that] are dragged together in the quarterly rev[ie]w’. The issue she was reading (from April 1819, Vol. 21, No. 42) includes wide-ranging reviews (not all mentioned by Maria in the letter) from Percy Bysshe Shelley’s Revolt of Islam, Lieutenant General Baron Pamphile de Lacroix’s Memoires pour server a l’Histoire de la Revolution de Saint Domingue, and E. Hawkin’s Dissertation on the Use and Importance of Unauthoritative Tradition and Personal Narrative of Travels to the Equinoctial Regions of the New Continent the years 1799-1804 by Alexander de Humbolt and Aime Bonpland. Maria clearly delights in the array of knowledge to collect, contemplate and share with her family.

We see from Maria’s comments her appetite for curiosities. She mentions, for example, the lengthy review of a new book on the cemeteries and catacombs of Paris which describes unusual ways of memorialising and imagining the dead. She draws attention in particular to a description of the luz – a ‘bone in shape of an almond’ at the base of the spine traditionally believed by Jewish people to be the bone from which the body will be resurrected. Maria might have been drawn to this particular excerpt from the review because of recent events in Europe, the Hep-Hep riots in the region of the German Confederation that took place between August and October 1819; these were pogroms against Ashkenazi Jews in the period of growing Jewish emancipation, many of whom died or had property damaged. Her comments in the letter do not refer to these riots but, as they were reported in the newspapers (and we can assume that she did read the newspapers), she would have been aware of these troubling events.

Maria was no stranger to anti-Semitic sentiment herself. Her 1812 novel The Absentee featured an unpleasant portrayal of a Jewish figure called Mr. Mordicai, drawn in the manner of Shakespeare’s vengeful and villainous Shylock. One American admirer, Jewish schoolteacher Rachel Mordecai (later Lazarus) (1788-1838), who was a fan of her educational writings, wrote directly to Maria on 7 August 1815 to complain about the ‘illiberality’ of her representations of members of the Jewish nation. Remarkably, the correspondence continued until Mordecai’s death (in fact descendants of both families continued to write to each other for another 100 years). The effect of Mordecai’s writing was significant: in 1817 Edgeworth published Harrington, which tackled the problem of inculcating anti-Semitic feeling in children, and can be seen as reparation for her earlier unsympathetic portrayal of Jewish people. The hero Harrington’s growing recognition of the errors of the anti-Semitic thinking a nurse impressed on him when a child even involves an encounter with the actor most famous for playing Shylock of the eighteenth century: Charles Macklin, who transformed the role from pantomime stock antagonist to a more psychologically ‘real’ figure than stereotypical villain. 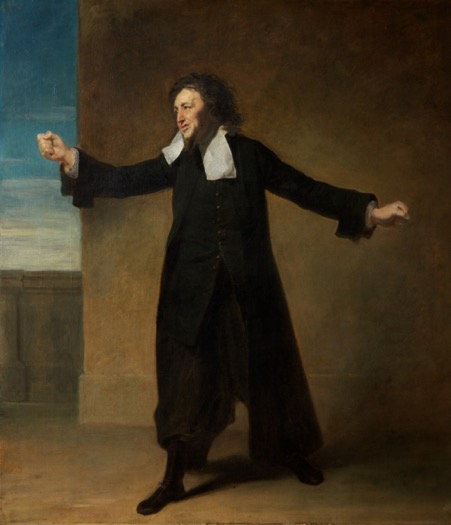 As we have shown, however, Edgeworth’s politics and social criticism is not always straightforwardly unambiguous; for modern readers, Edgeworth’s revised representations of Jewish people remain underwhelming. As Rachel Schulkins has suggested, ‘Edgeworth attempts to “overturn” the traditional Jewish stereotypes… by portraying the Jew as essentially a good Christian’: Harrington’s love interest, the beautiful Jewess, Berenice, turns out to be a Christian after all (though she has a Jewish father, she has a Christian mother in whose faith she was raised). That said, Maria’s exchange with Rachel Mordecai and subsequent writings do show her willingness to rethink her ideas, and the reading discussed in this letter bespeaks a broad interest in ‘curiosities’ and ideas that surely influenced her beyond her immediate circle.

Indeed the letter also shows that Maria did sympathise with and listen to those caught in dramatic scenes of conflict on a smaller stage. At the close of the letter she describes a domestic incident: ‘a horrible scene of lying and counter lying as cannot be spoken of in jest. It ended in Lovell and Mrs E’s dismissing the cook upon the spot’. The night before, described by Maria as ‘black Saturday’, the cook and the kitchen maid had both claimed ‘certain blankets & sheets stolen betwix’ them’. On the Sunday afternoon, matters came to a head and an argument ensued – for three hours – before Mrs. Edgeworth ‘magnanimously parted’ with the cook, ‘regardless of her own convenience’. Truth, for the Edgeworths at least, was always more important than convenience.

If you’re in Oxford, you can find out more about the Edgeworths and their shared endeavours (as well as their travels and Maria’s fame) at our new exhibition, Meet the Edgeworths, which runs from 30 November 2019-1 February 2020 in the Proscholium of the Old Bodleian Libray. Do also keep an eye on Twitter (@EdgeworthPapers) and look out for our final blog of this year next month! 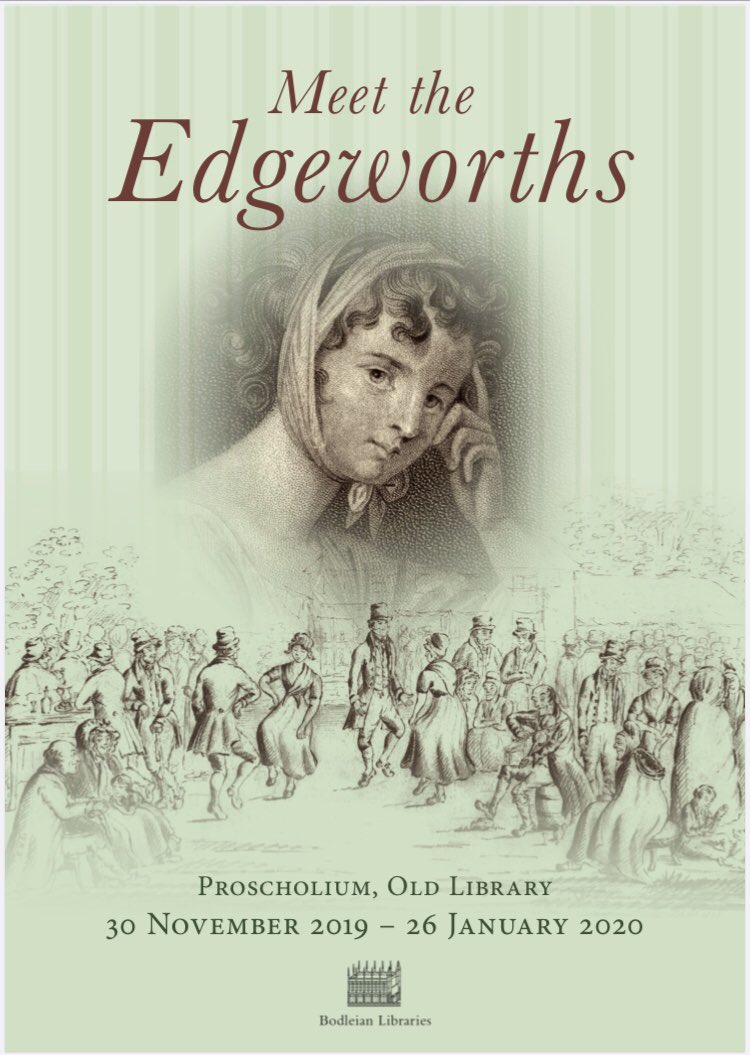