Working in archives, there is one thing which I find really special, and actually quite magical: even with a catalogue description, I am never entirely prepared for what is waiting inside the box. MS. Eng. poet. f. 33 is a perfect example of this. The Summary Catalogue entry for this item reads:

Twelve booklets containing copies of works by 20th cent. poets, written, and decorated in colour, by Frederic Prokosch, ‘New Haven 1932’, probably made 1968-70; a colophon in each states that it is one of five numbered copies.

I was intrigued by the date uncertainty, and by the fact that these would be handmade editions so I was curious to check out the contents. Inside a small dark blue box lay indeed twelve booklets, most of them with colourful marbled covers, along with an enclosed letter. 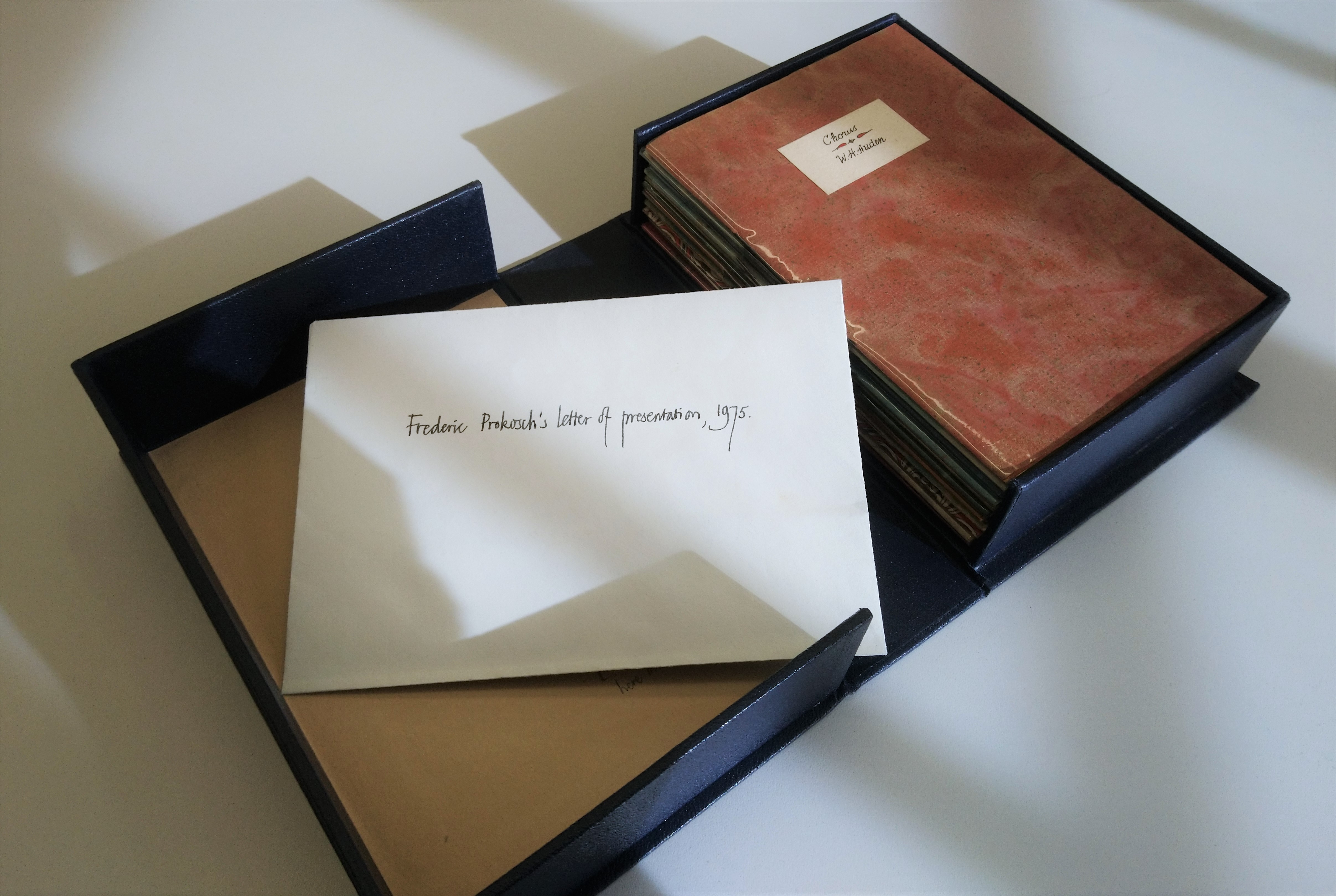 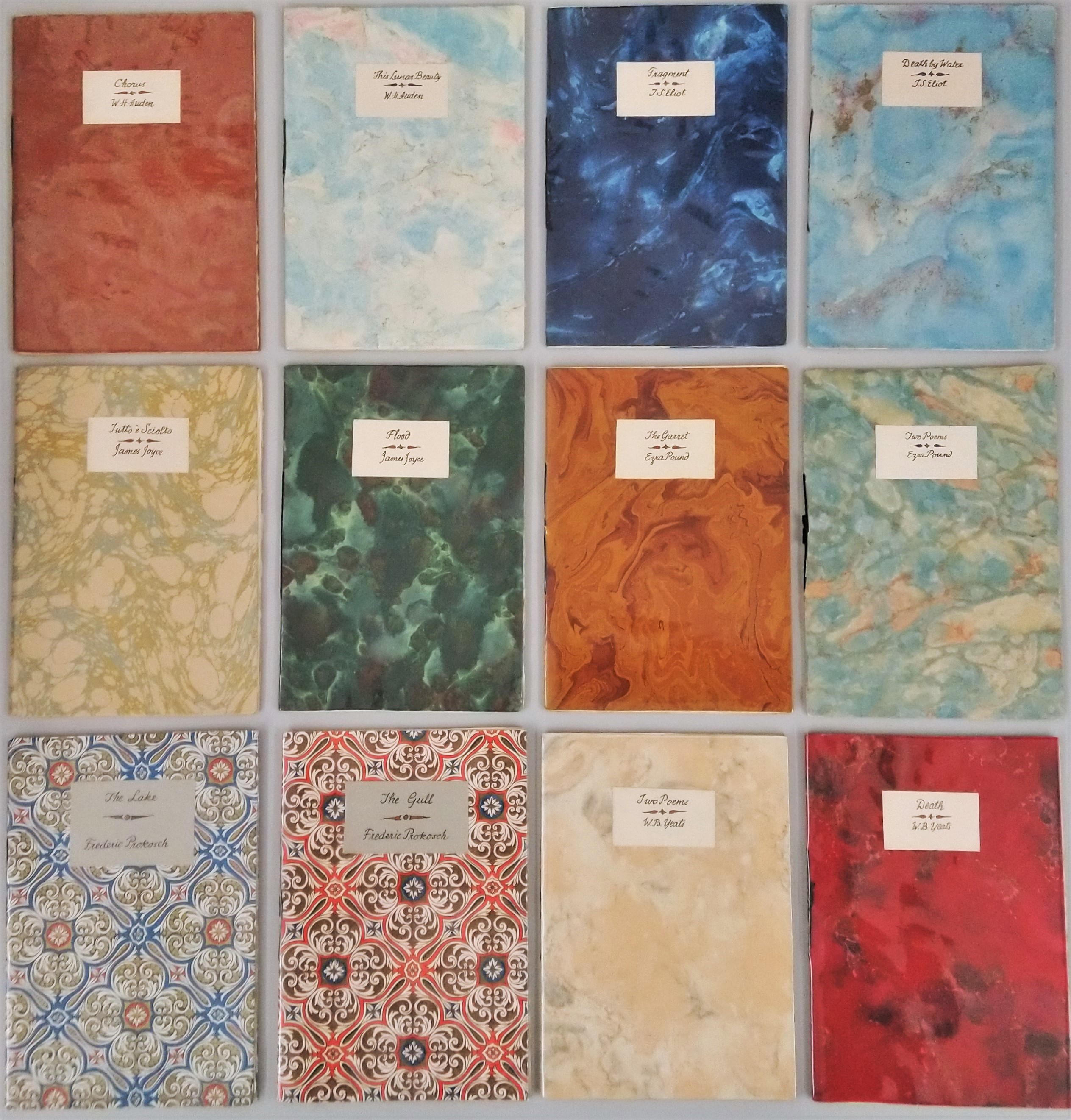 There are six poets featured in the series—W. H. Auden, T. S. Eliot, James Joyce, Ezra Pound and W. B. Yeats, along with Prokosch himself—and two booklets per poet. Quite interestingly, the two that do not have marbled covers are works by Prokosch; an attempt, perhaps, to differentiate himself from his fellow writers? Apart from the difference in the covers, all booklets are built in the same way: around five leaves, with a unique illustration at the beginning, always containing gold elements, and the poem(s) in the middle of the booklet with an illumination for the first letter. 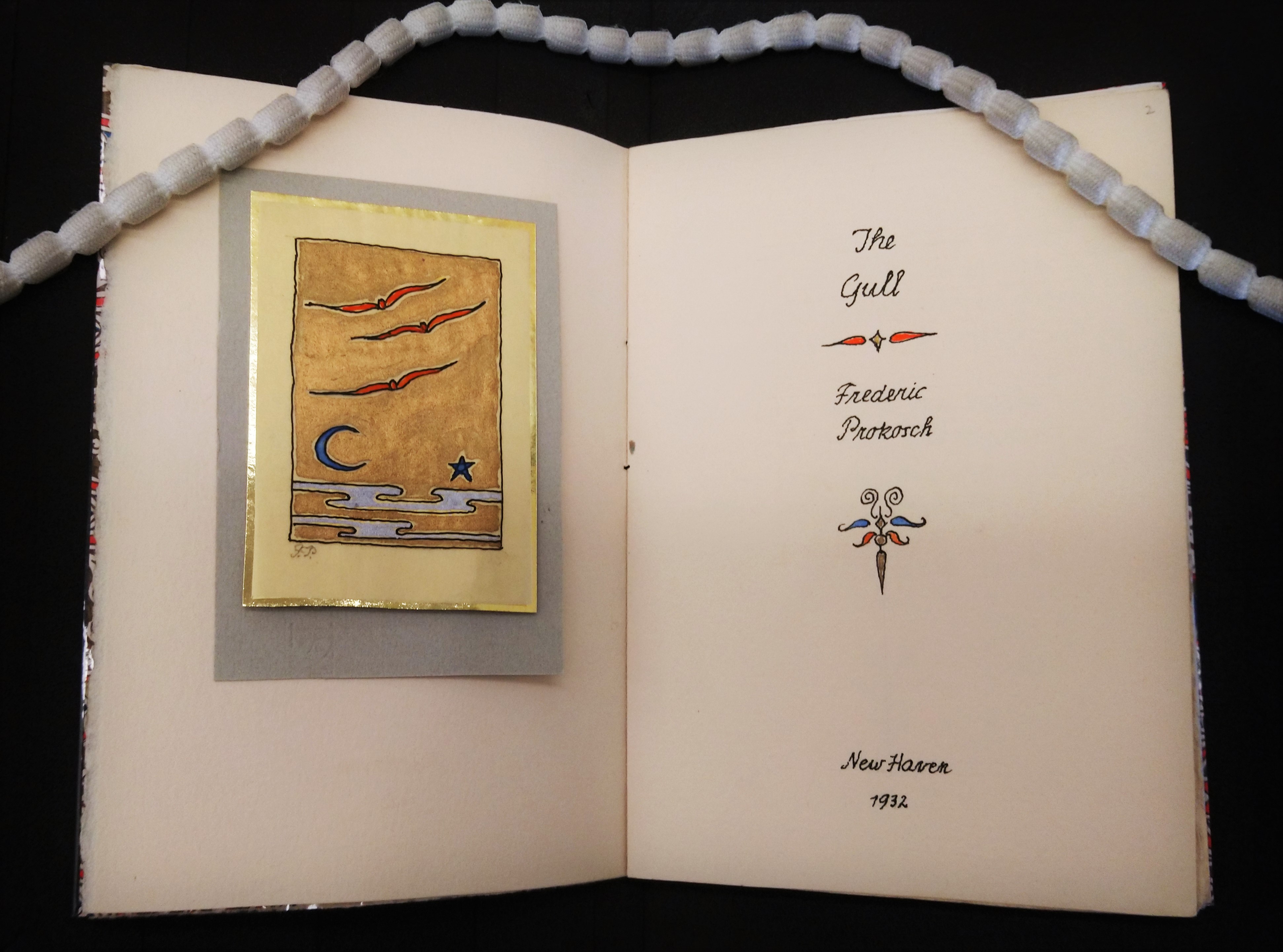 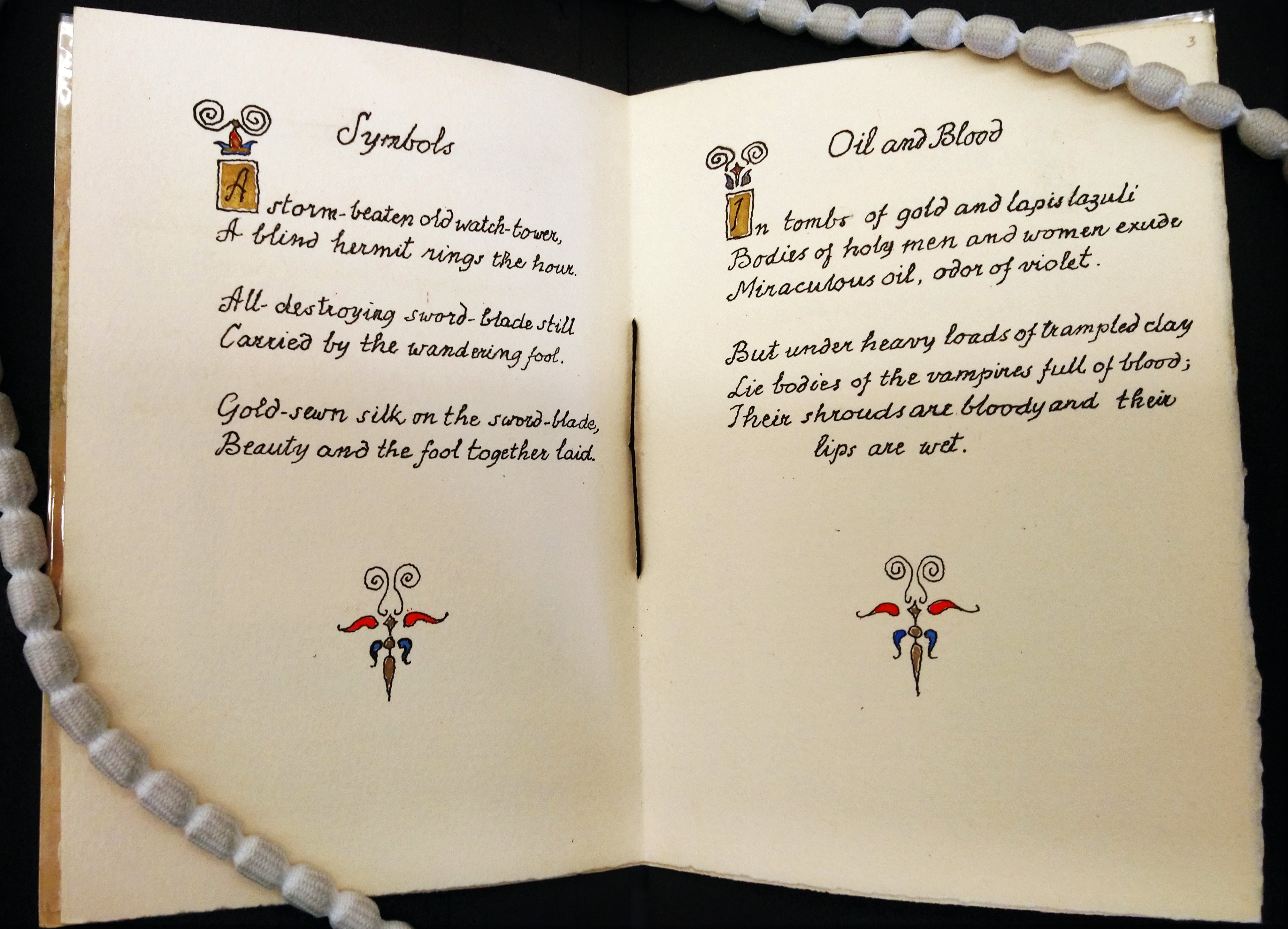 Frederic Prokosch was born in Wisconsin, in the United States, in 1908. He studied literature before becoming a writer himself, publishing his first novel in 1935 (The Asiatics), and his first collection of poems in 1936 (The Assassins). His memoir, Voices (1983), although proven to be mostly a fictional work, depicts Prokosch’s passion for the arts of the written word. In Voices, the reader is treated to a collection of anecdotes, including a tale of his newly discovered passion for poetry and printing: “I turned to poetry . . . My poems grew twisted, exotic, impenetrable. I wrote of mountains and deserts, of icebergs and caravans. My longing to burst into print grew into an uncontrollable mania.”[1] Although not printed editions, the booklets that form MS. Eng. poet. f. 33 probably were a product of this desire. Through the memoir, the reader also follows Prokosch as he encounters a great number of famous artists, many of them writers, including Auden, Eliot, Joyce, and Pound. Although there is no indication of any meetings with Yeats, the Irish poet is frequently mentioned throughout Voices. As questionable as those stories might be, they are nonetheless a testimony of Frederic Prokosch’s respect and admiration for his fellow writers.

Voices is not the only thing about Prokosch that raises suspicion regarding its accuracy. Robert Greenfield, who extensively studied the American writer in Dreamer’s Journey: The Life and Writings of Frederic Prokosch (2010), pointed out:

As a consequence of this medley of twists and turns, apocryphal claims, misstatements, distortions, and falsifications encompassing more than a century, even the simplest facts of his life, such as the date of his birth, are still subject to dispute.[2]

It seems MS. Eng. poet. f. 33 is no exception to this, falling in the very shroud of mystery described by Greenfield. It is quite unclear when Prokosch actually produced the booklets; although he claims they were made in New Haven in 1932, the New Summary Catalogue entry suggests otherwise: “‘New Haven 1932’, probably made 1968-70”. And they might even have been made slightly later than that. Indeed, upon close examination, some of the papers chosen by Prokosch bear (very faint but still visible) watermarks revealing the brand of the material—Arches and Ingres, both French brands. Quite interesting when one knows Prokosch spent the last decades of his life in the South of France. This would also be a perfect match to the biography written by Greenfield:

In 1972, Frederic abruptly ceased his travels and retired to ‘Ma Trouvaille’, a cottage in Grasse, in the south of France, where he played bridge, made some half-hearted efforts to cultivate a garden, revived his interest in printing private limited editions of his favourite poems and withdrew into invisibility.[3]

When I opened MS. Eng. poet. f. 33 I was, as always, quite unsure what would be sitting within the box. In this case, I found very beautifully made booklets of poetry, including some by one of my own favourite authors. But I also discovered Prokosch, a writer I had never encountered before working here, and more than that, I found myself in the middle of a date riddle. Pretty exciting for a small dark blue box.

2 thoughts on ““My longing to burst into print grew into an uncontrollable mania”—Handmade editions of poetry by Frederic Prokosch (MS. Eng. poet. f. 33)”