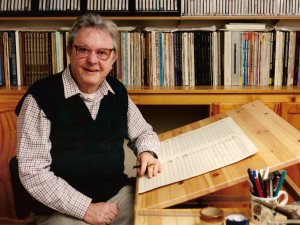 Robert Simpson (1921-1997), was an English composer and writer on music and, from 1951 until 1980, a well-respected BBC producer and broadcaster. His pioneering and popular radio programme ‘The Innocent Ear’ ran for many years introducing the British public to music of lesser-known composers. As well as his work for the BBC, he published a distinguished body of music, including 11 symphonies, 15 string quartets and other chamber music. He was a highly regarded composer and was even afforded the unusual honour of having a society founded in his name during his lifetime (https://robertsimpson.org.uk/). As a particular expert on Beethoven, Bruckner and Carl Nielsen, he wrote extensively and illuminatingly on these and other composers. 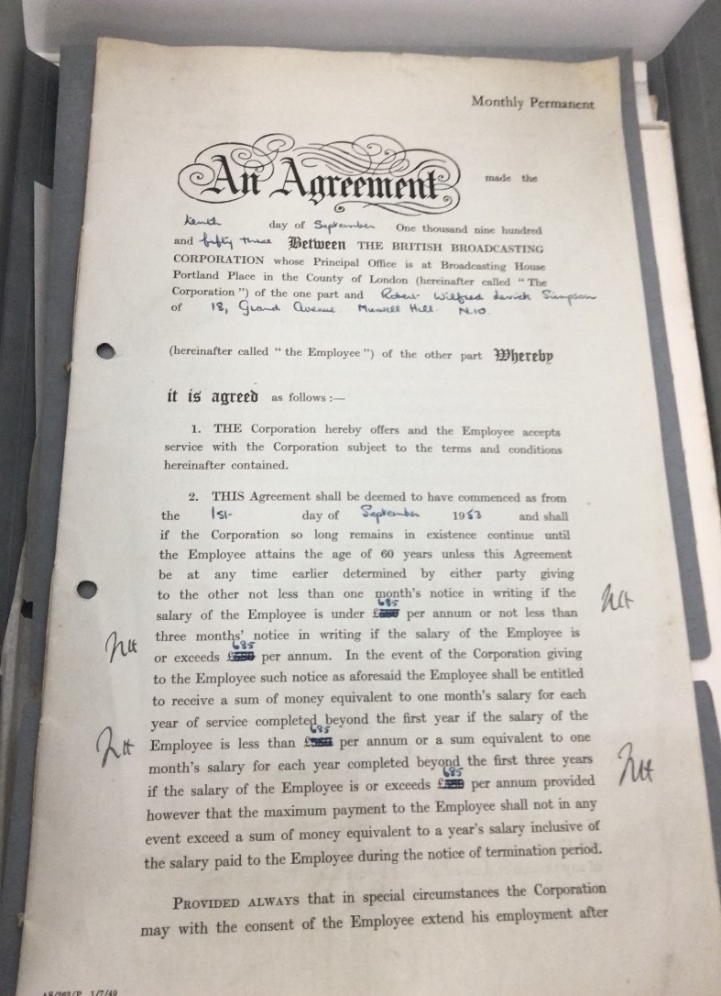 Housed in the Bodleian’s Weston Library in Oxford, the Simpson collection brings together the archive of the Robert Simpson Society and additional material gifted by the late Angela Simpson, the composer’s widow, and others. 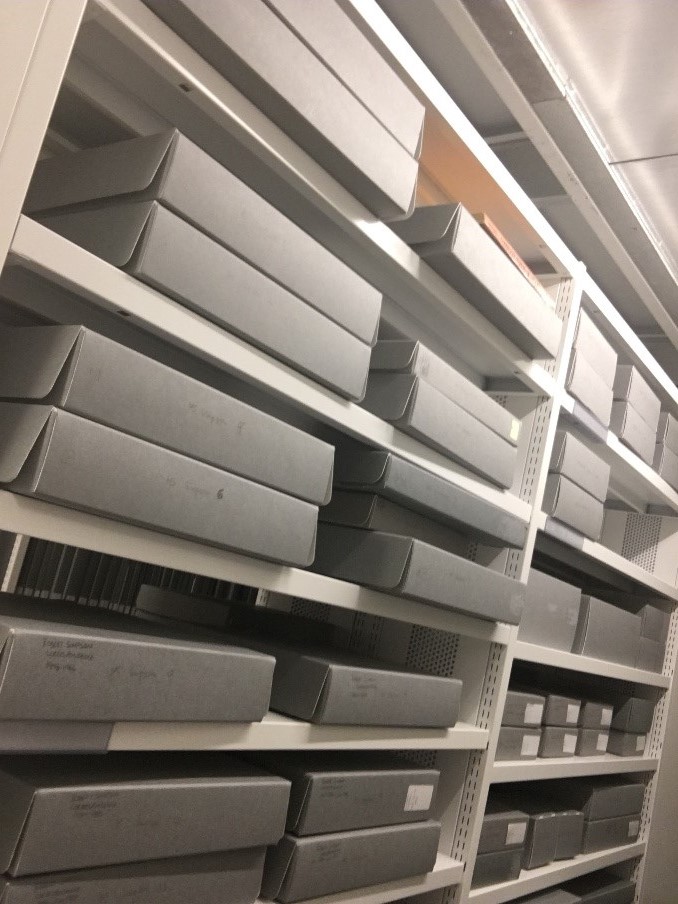 A small section of the Robert Simpson archive

Simpson’s original music manuscripts are in the British Library but the Archive in the Bodleian includes photocopies of many of the music manuscripts, often further annotated by the composer himself. The Bodleian archive also contains original correspondence and writings, broadcasting scripts, concert programmes, recordings and more. It has recently been catalogued for Archives Bodleian (https://archives.bodleian.ox.ac.uk/repositories/2/resources/3681#) as part of the ongoing Music Manuscript cataloguing project. All the archival material quoted in this post can be found in a box bearing the shelfmark MS. Simpson 21.

It reveals that the 1980s were a trying time for Simpson. His disagreements with the BBC, particularly over the Proms, eventually resulted in his resignation, and his passionate hatred for the Prime Minister Margaret Thatcher led him to move to the Republic of Ireland in 1986.

In 1980, tensions between various musicians, music producers and the BBC came to a head due to severe cuts in funding, which threatened the loss of a third of the BBC’s musicians and the scrapping of five of its orchestras. In fact, a strike by the orchestras caused the cancellation of 20 Proms concerts that year. Despite this, the BBC were not planning to showcase less music but to increase its output of records and foreign tapes. The Musicians’ Union stated that ‘over 60% of B.B.C. radio output consists of music but less than 5% of radio expenditure is on staff orchestras’ (such leaflets can be seen below), claiming that the BBC had therefore broken its agreement with the Union. 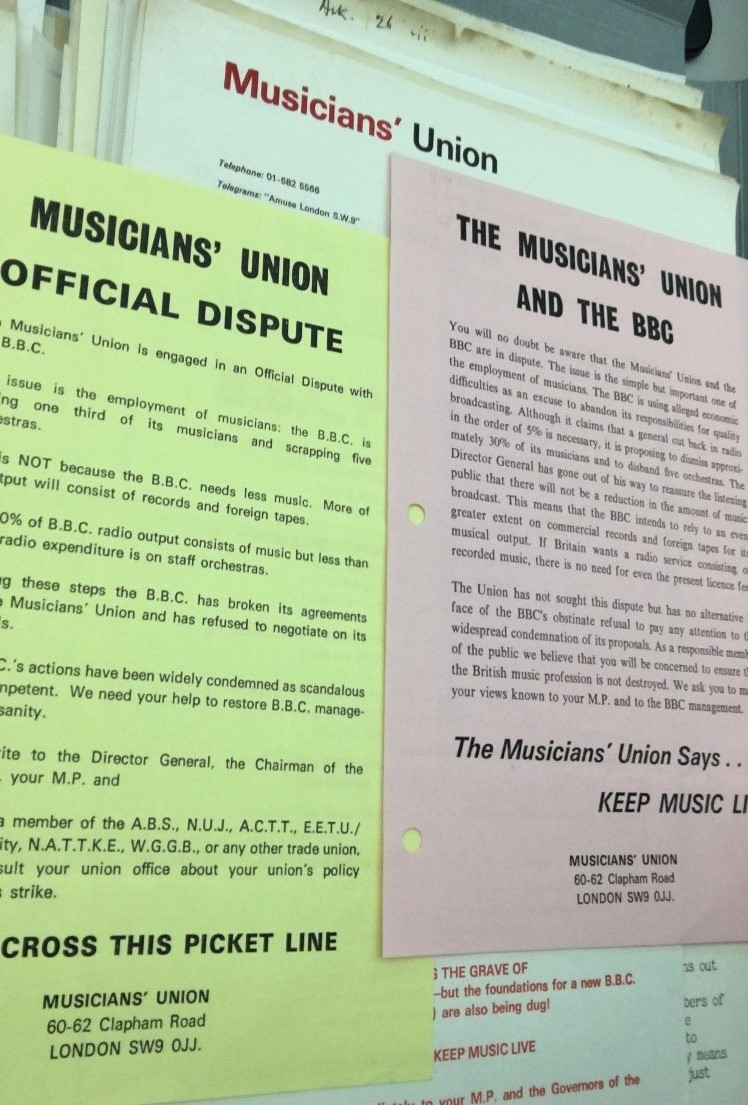 Material documenting the musicians’ dispute with the BBC (MS. Simpson 21)

Robert Simpson disapproved greatly of the BBC’s decision on this issue, believing Britain’s cultural integrity to be at risk. It also becomes clear from the papers in MS. Simpson 21 that the composer, always forthright in his views, was rather irritated by the BBC and those who defended it.

In a letter to Robert Ponsonby, Director of the Proms from 1974 to 1986 and Controller of Radio 3 (who died last year at the age of 92), Simpson scathingly wrote, ‘Your public support of them wins no respect…’. Regarding other people in the music profession who had written to the press in defence of a dwindling cultural life, Simpson declared, ‘I wish I could follow their example, and it is contractual duress not false loyalty that prevents me from doing so’ (12 March 1980). However, just four months later Simpson would rebel against this ‘contractual duress’.

After The Times had jumped the gun and falsely reported Simpson’s resignation on 11 July, Simpson retaliated with a response that the BBC had persuaded him to delay his resignation due to the fragile negotiations with the Musicians’ Union and their wish to avoid negative publicity. However, after the hearsay over Simpson’s relationship with the BBC he brought his resignation forward, just months away from retirement, which would have enabled him to claim a full pension.

In his letter to the editor published in The Times on 18 July 1980 he states ‘I have resigned from the BBC, for reasons wider and deeper than the current argument over the orchestras, which is only the symptom of a larger problem.’ Simpson argues that, ‘When I first joined the Corporation nearly 30 years ago it was a wonderful and promising place to be at, with the Third Programme at the height of its achievement… Since the BBC’s capitulation to the urge to compete on the lowest level with commercial broadcasting values have degenerated.’

Simpson ends this letter with a harsh testimonial: ‘I can no longer work for the BBC without a profound sense of betrayal of most of the values I and many others believe in… It is now necessary for me to be able to say what I wish to whom I wish when I wish, without the shackles imposed by that all too sinister phrase “corporate loyalty”. This is why I have resigned’.

Simpson immediately began to receive overwhelmingly supportive responses from fellow composers, musicians and admirers. Many key phrases such as, ‘courage’, ‘marvellous letter’, ‘what you said certainly needed saying’, and ‘thank you’ jump out from this correspondence, showing how much opposition there was to the BBC’s attitude and its decisions at the time. 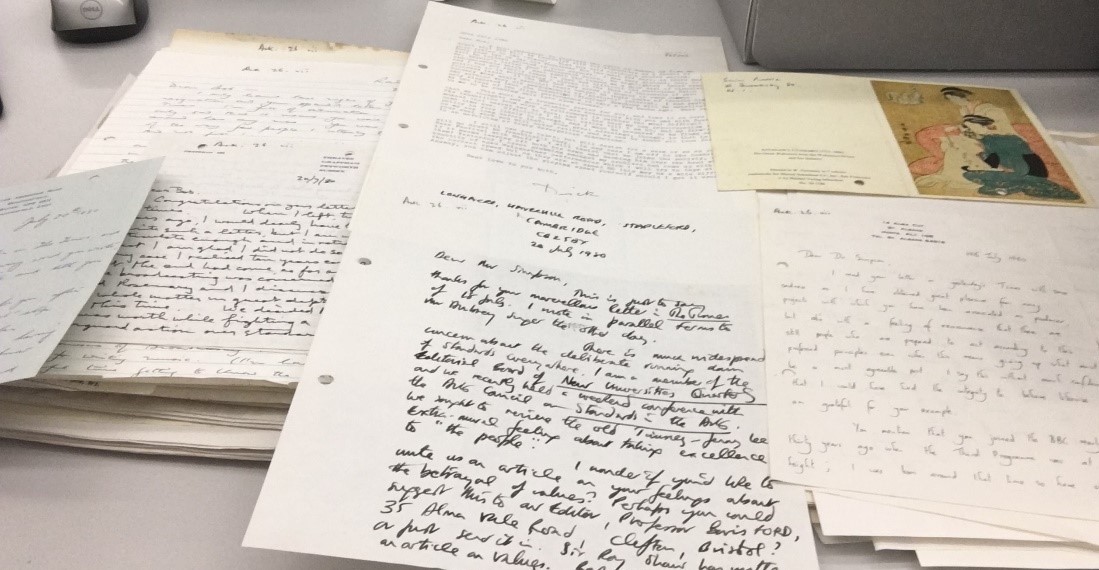 A small selection of the responses, all dated 19-20 July 1980
One such letter, dated 19 July 1980, begins with ‘I read your letter… with some sadness as I have obtained great pleasure for many projects with which you have been associated as producer, but also with a feeling of reassurance that there are still people who are prepared to act according to their professed principles… am grateful for your example.’
After his resignation Simpson remained a vocal critic of the BBC and campaigned for music funding. He also continued his career as a composer, completing several further works. With time tensions with the BBC subsided slightly, and his compositions were once again played on BBC stations, although perhaps not as often as they deserve.

Robert Simpson suffered a debilitating stroke in 1991 which all but ended his composing career. He died in 1997, aged 76. The Robert Simpson Society continues today. 2021 marks the centenary of Simpson’s birth so do look out for performances of his music next year. It’s well worth getting to know!