This is the second in a series of five blog posts to mark the bicentenary of John Hungerford Pollen whose archive has recently been acquired by the Bodleian Libraries.

As we saw in yesterday’s blog post, John Hungerford Pollen became a Senior Proctor of the University of Oxford in 1851, having been a fellow at Merton College since 1842 and a Church of England priest since 1846.

Pollen had, however, become increasingly influenced by Tractarianism and the Oxford Movement, a cause championed by many members of the Church of England to return to many of the older traditions and reform the Anglican liturgy. Such thinking was hotly contested at the time. For many, it came dangerously close to Catholicism and many priests risked losing their livings (it was only in 1829 that the Roman Catholic Relief Act had been passed in Parliament to allow Catholics to become MPs). Pollen soon became associated with one of the leading figures of the Oxford Movement, Edward Bouverie Pusey (1800-1882), a fellow of Oriel College, Oxford. In the summer of 1847, Pollen travelled around France with a couple of Oxford friends to examine the role of the Roman Catholic church in bringing faith and hope to the poor; they went on to Italy and Germany and Pollen assiduously studied the architecture of churches in Ravenna and the new basilica of St Boniface in Munich.

In 1847, Pollen also became pro-vicar at the new St Saviour Church in Leeds (the building of which was anonymously funded by Pusey) during an interregnum after the vicar there was accused of Romanism and forced to resign: three curates had also left and fully converted to Roman Catholicism. The use of auricular confession during Pollen’s time there sparked further controversy which ended up with Pollen and his colleagues being banned from holding the Christmas Eve service in 1850. Whilst the ban led to the conversion of Pollen’s colleagues, Pollen instead argued his case with the Bishop and was reinstated. In 1851, he published Narrative of Five Years at St. Saviour’s, Leeds, defending Tractarianism and the use of Catholic practices within the Church of England, writing that ‘The working of St. Saviour’s was an attempt to give a practical solution to questions of inexpressible interest to some of us at the present time’. The Narrative also described the harsh and unforgiving living conditions of the working class poor, among whom there had been a serious cholera epidemic in 1849. 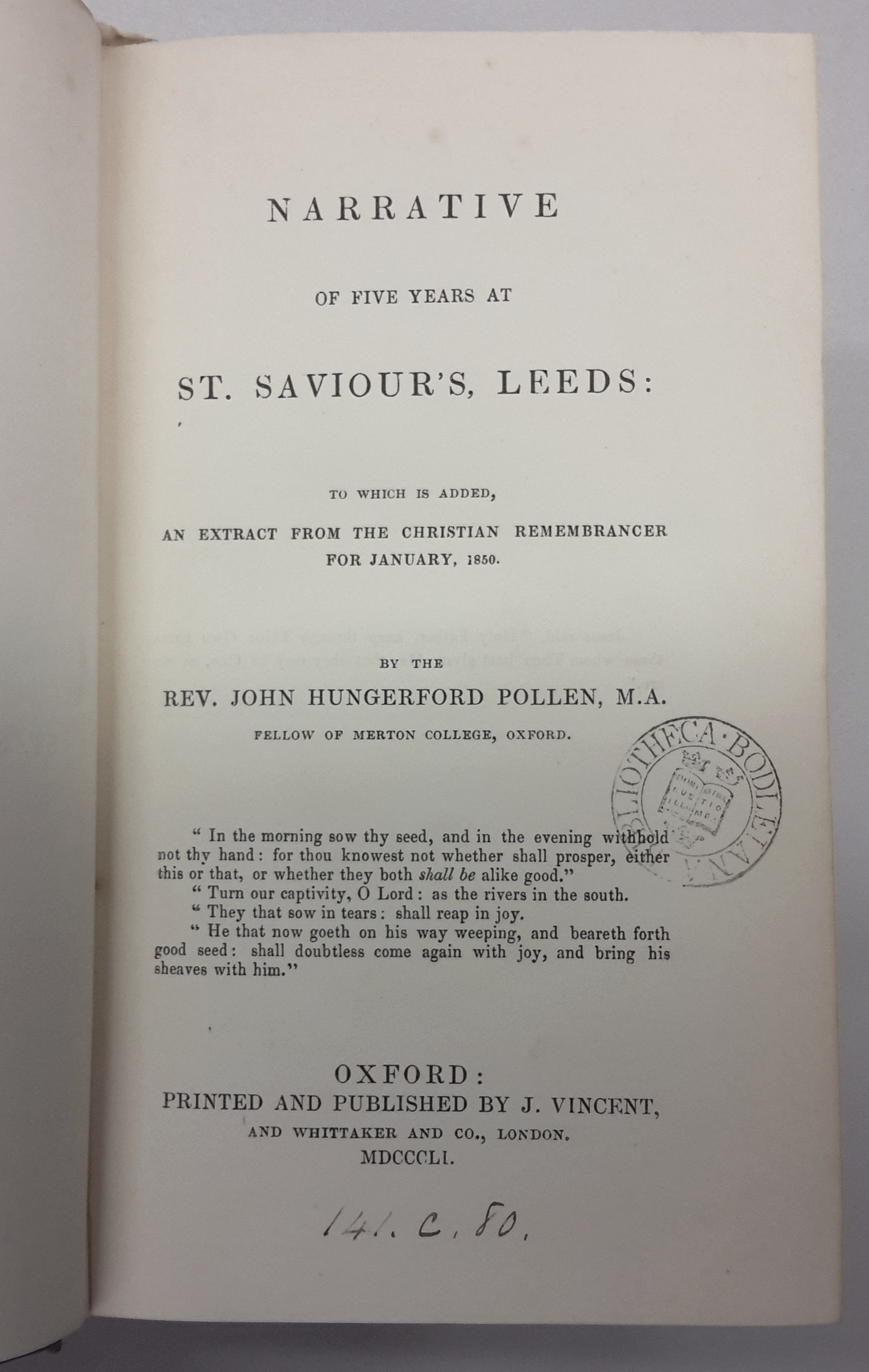 The Narrative and the events it described was nonetheless a prelude to Pollen’s own conversion and he was received into the Roman Catholic Church in Rouen on 20th October 1852. This was a big step to take as it meant he had to forfeit his fellowship at Merton and his other university offices. For Pollen, however, it was undoubtedly the right step, as he wrote to a friend:

Every doubt is at rest, and I have found that kind of calm which one needs repose and reflection to enjoy in full. I cannot tell you how great an advantage I think it to have been able to do this out of England. (1)

Pollen’s elder brother, Hungerford, became a Catholic the following year. Both brothers were consequently disinherited by their uncle Sir John Walter Pollen, 2nd Bart, of Redenham, Hampshire. Whilst Hungerford still inherited the baronetcy, in Sir John’s will dated 16th April 1862, he made membership of the Church of England a necessary condition for the inheritance of his estate. So, after the death of Sir John’s widow in 1877, Redenham was inherited by Hungerford’s son (also named Richard Hungerford Pollen, 1846-1918). 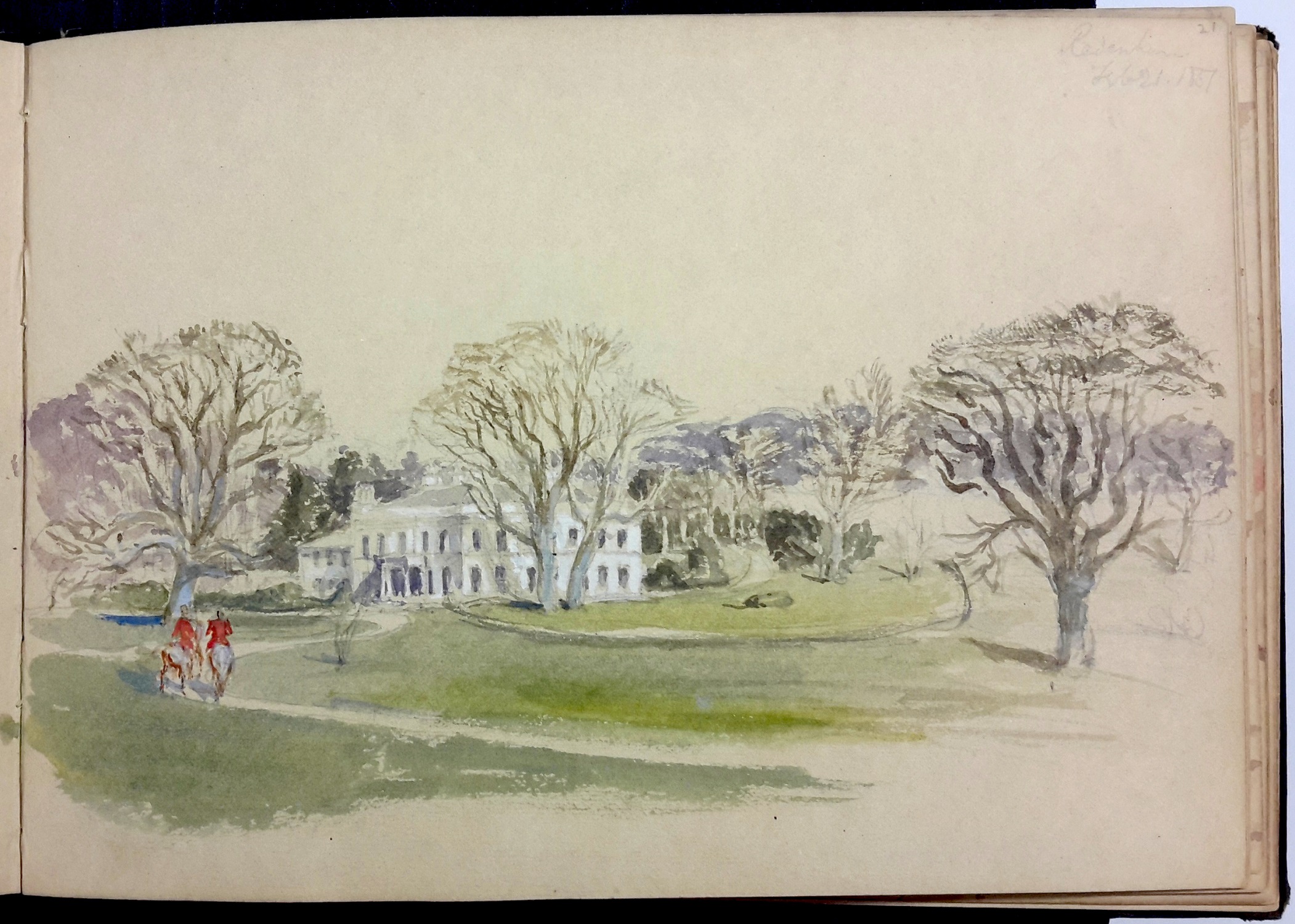 At this point, therefore, Pollen had neither career (as he had decided not to take orders) nor inheritance prospects. After his conversion, he travelled to Rome where he became acquainted with the writer William Makepeace Thackeray as well as the LaPrimaudaye family who were also recent converts to the Catholic Church. Despite his lack of prospects (and a seventeen year age gap), Pollen became engaged to Maria Margaret LaPrimaudaye (1838–1919) in 1854 and they were married on 18th September 1855 in the church of Woodchester monastery, near Stroud, Gloucestershire. 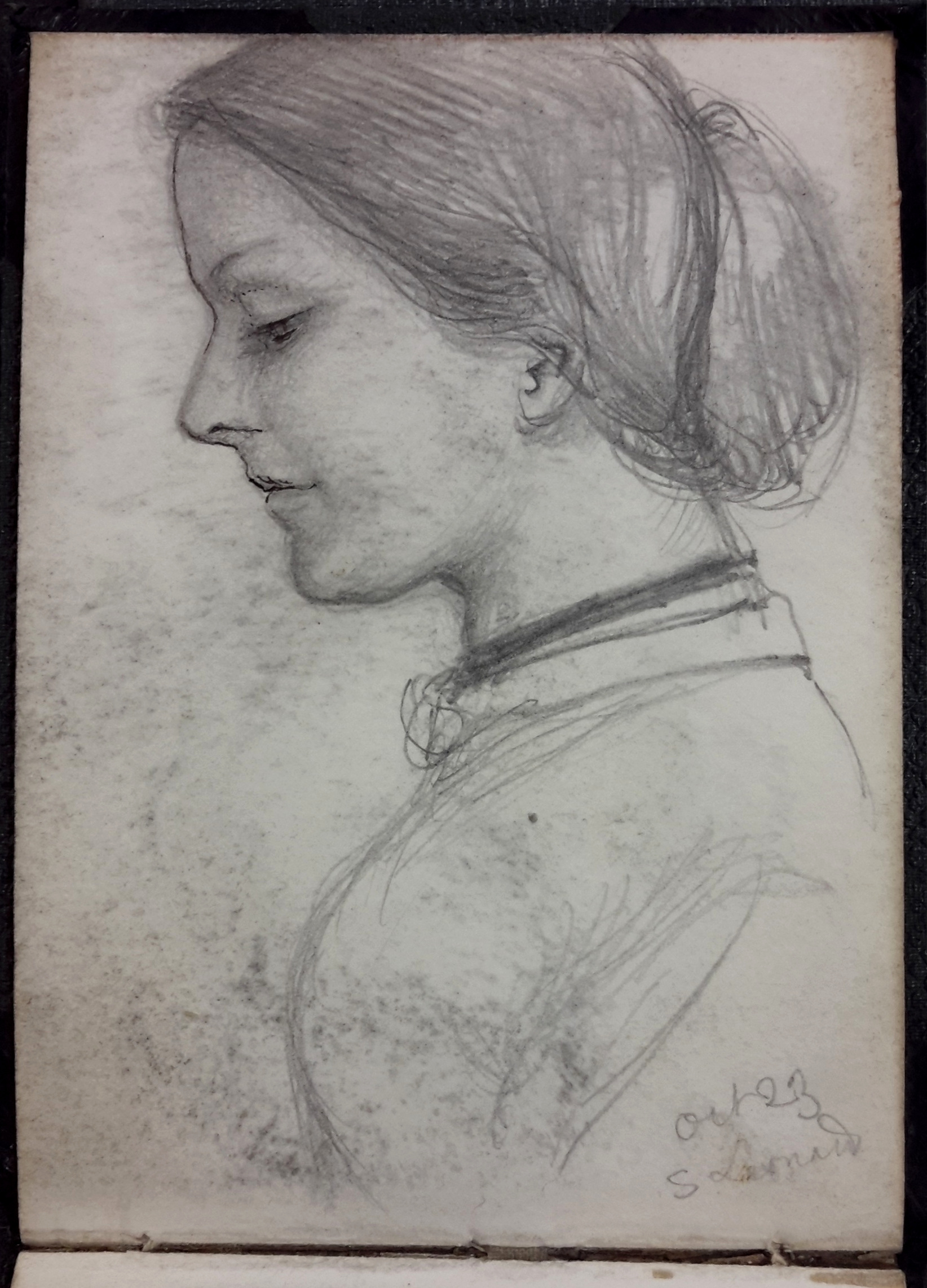 Through his new connection with the LaPrimaudayes, Pollen received an offer from John Henry Newman (1801-1890) in November 1854 to become professor of fine arts at Newman’s new university in Dublin. Another leading figure in the Oxford Movement, John Henry Newman had likewise been a fellow of Oriel College, Oxford and was vicar of St Mary’s University Church before he was received into the Catholic Church in 1845. Cardinal Newman (as he became in 1879) was to become one of Pollen’s great friends and correspondents. 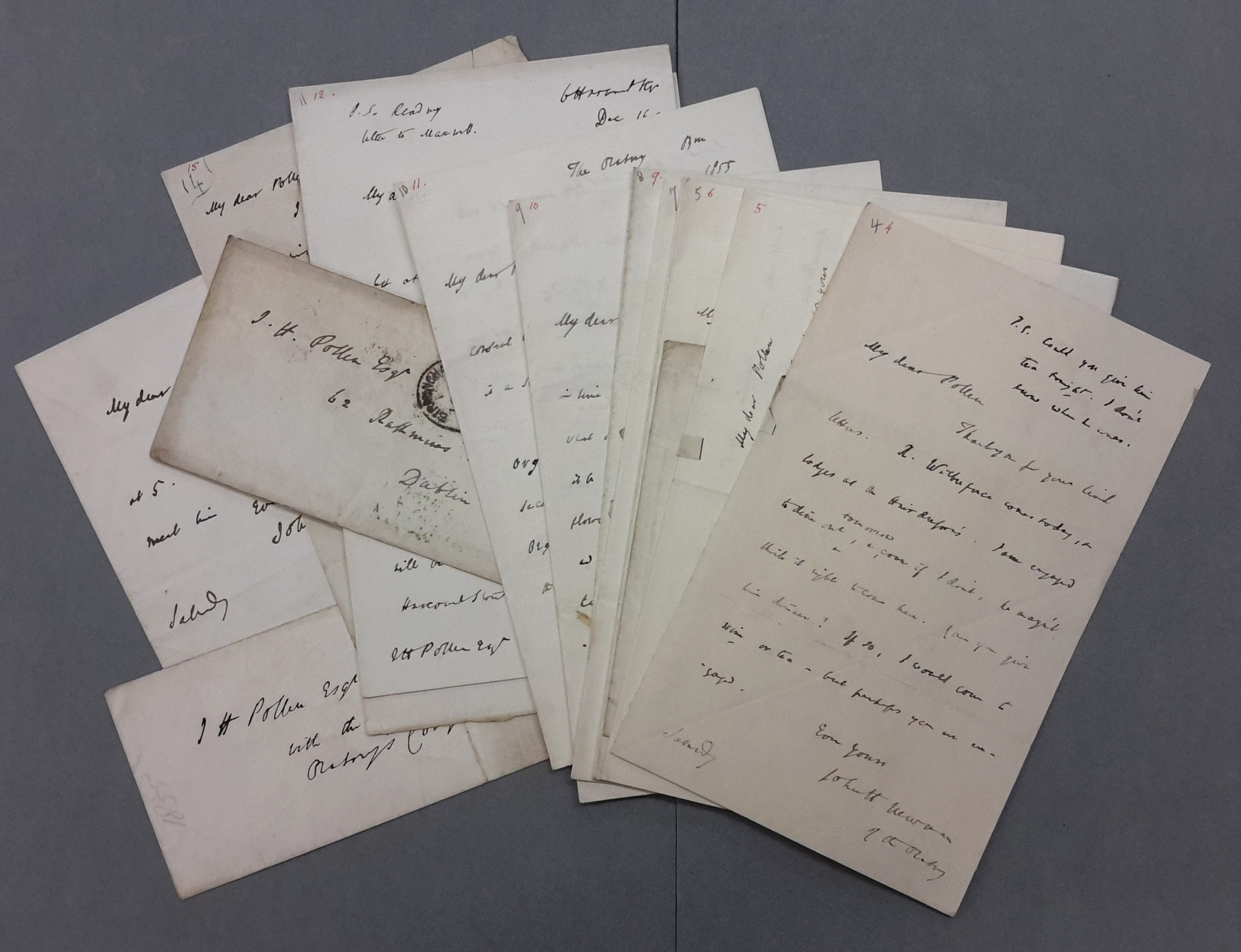 As to the decoration of an University Church, of which you kindly speak, we must have a Church, temporary or permanent, and it must be decorated – and I should be very much obliged for your assistance in the decoration.(2)

Unlike Pugin and the contemporary desire for Gothic-style churches, Pollen favoured a Byzantine style for the university church, which was consecrated on Ascension Day, 1 May 1856. 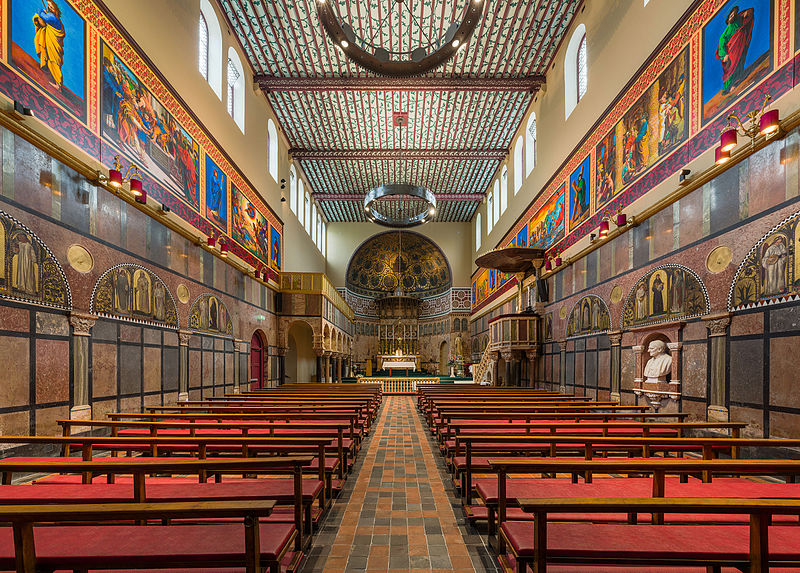 In 1857, Pollen and his family moved to London. The move would further stimulate his career in art, design, and architecture, which is the subject of tomorrow’s blog post.