This is the third in a series of five blog posts to mark the bicentenary of John Hungerford Pollen whose archive has recently been acquired by the Bodleian Libraries.

Pollen’s interest in architecture can be seen throughout his sketchbooks: here showing a sketch of Cefnamwlch House and garden, 2 October 1851 [above] and of Longleat from the garden, 14 September 1852 [below], Bodleian Libraries, Pollen archive, currently uncatalogued

In 1857, John Hungerford Pollen moved to London with his small family (now consisting of his wife, Maria, and their eldest child, Anne Gertrude Mary, who was born the previous year). This was to prove crucial in Pollen’s burgeoning career in art, design, and architecture, encouraged by his uncle, Charles Robert Cockerell, the architect of the Ashmolean Museum in Oxford.

In London, Pollen soon joined the newly formed Hogarth Club, founded by notable members of the Pre-Raphaelite Brotherhood, which counted among its members Dante Gabriel Rossetti, William Morris, Edward Burne-Jones, William Holman Hunt, and John Ruskin. Though the Hogarth Club was short lived, the friendships he made lasted throughout his life. Pollen’s daughter Anne sat for Burne-Jones and appears in his 1884 painting King Cophetua and the Beggar Maid.

Through John Ruskin, Pollen was commissioned in 1858 to design the carvings for the façade of the new University Museum of Natural History in Oxford. The museum’s founders and the architect, Benjamin Woodward, were inspired by the Pre-Raphaelite movement and employed some of the finest artists and craftsmen of the day to work on the building. In the summer of 1858, Ruskin also commissioned Pollen to work on the mural decoration of the Oxford Union library alongside fellow artists Dante Gabriel Rossetti, Edward Burne-Jones, and William Morris, depicting scenes from Arthurian myth. 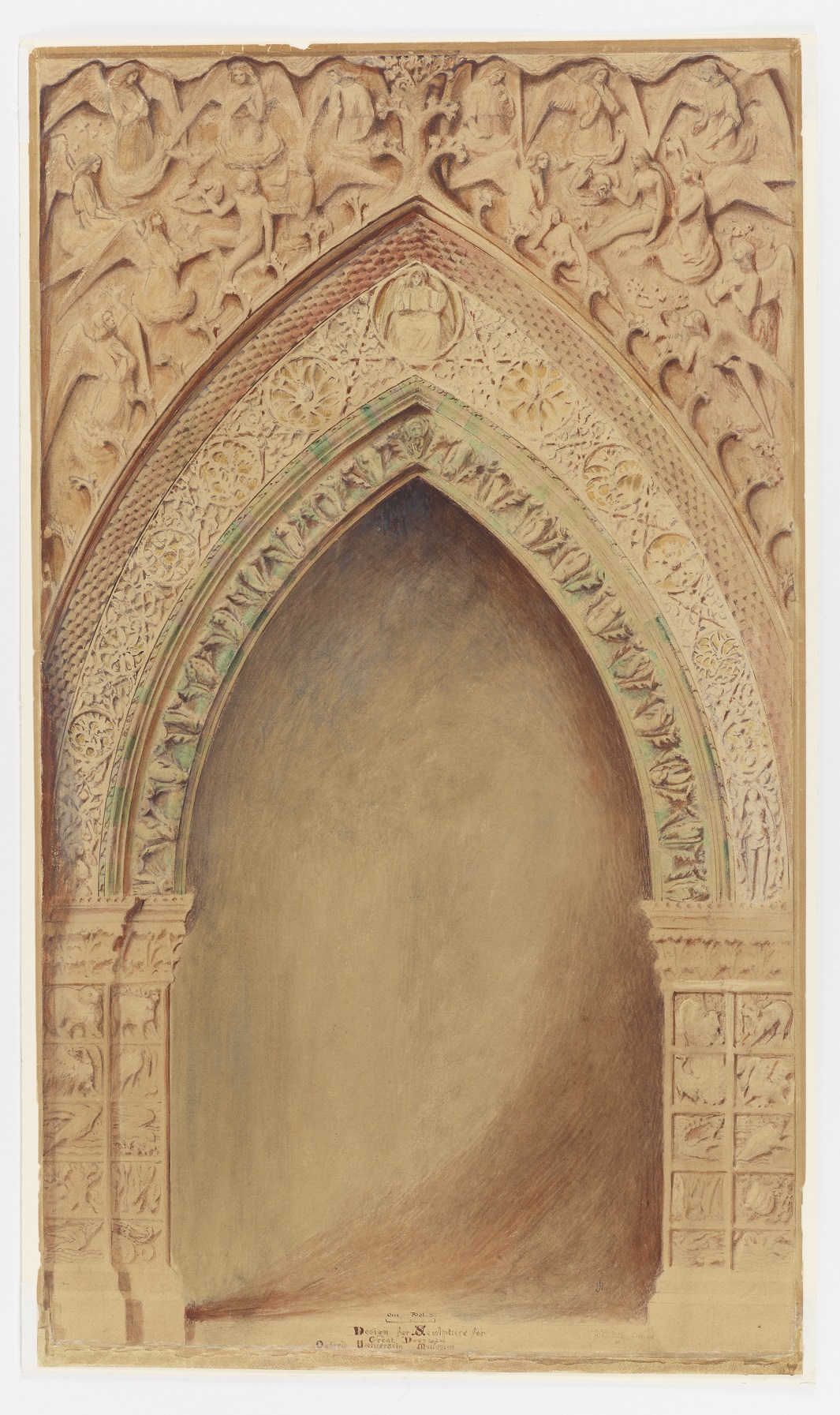 More commissions were to follow in the 1860s and 1870s, which proved very productive decades for Pollen. His association with the architect Benjamin Woodward continued when he designed rooms for James Anthony Lawson’s new house, Clontra, near Dublin and a picture gallery for the Marchioness of Ormonde at Kilkenny Castle. Among many other commissions, he also designed interiors at Blickling Hall, Aylsham for William Kerr, eighth Marquess of Lothian, and designed the fresco decoration at Alton Towers for the Earl of Shrewsbury.

Pollen’s knowledge and interest in art and design also led to his appointment as one of the jurors for the International Exhibition held in London in 1862. The following year, at the suggestion of his friend William Makepeace Thackeray, he was appointed by Sir Henry Cole as Assistant Keeper at the South Kensington Museum (now the Victoria and Albert Museum), which had opened on the present site in 1857. As Assistant Keeper, Pollen produced catalogues of furniture, sculpture, and metalwork.(1) He also taught in the Government School of Design and submitted entries to the Encyclopædia Britannica.

Pollen’s daughter Anne would later write about his time at the South Kensington Museum in her biography:

…from 1864 until the last few years of his life, travelling became a duty. His connection with the South Kensington Museum necessitated an average of at least two yearly journeys for the acquisition of objects by purchase or loan; nor was he ever without one or more private commissions to furnish houses or rooms, to add to collections of china, to procure old hammered iron, tapestry, hangings, or what not; to give an opinion as to the authenticity of pictures, or their value…

He negotiated the removal of whole rooms, with their fittings and furniture, to South Kensington, or he procured casts of sculptures and mouldings, so that during the whole time of his connection with the museum it was increasing in representative completeness, and that at a money cost to the nation comparatively trifling.

He was acquainted with shops and dealers, private collectors, connoisseurs, of all nations; retaining an opinion that London was after all the best place for purchase, if you knew where to go. Hunting here and there, he was able to acquire easily many beautiful and valuable things. (2)

Pollen continued to be internationally recognised in other ways: he was a juror for the International Exhibition in Dublin (1865) and also for the Exposition Universelle in Paris (1867), where he was awarded a gold medal for the first part of his ‘Universal catalogue of books on art’.

In 1876, Pollen resigned his post as Keeper at South Kensington Museum and embarked upon the next chapter of his varied career, which will be explored in tomorrow’s blog post.