The thing that drew me to this internship was the opportunity to redefine and recapture black history at Oxford. A part of a joint project with the Museum of Oxford, the internship allowed me to explore the varied history of political activism in anti-black discrimination. It also gave me the chance to reinstate black political actors into the conversation of anti-racism and recognise their work and importance in the progress we have made so far and how they have inspired us to continue this work. 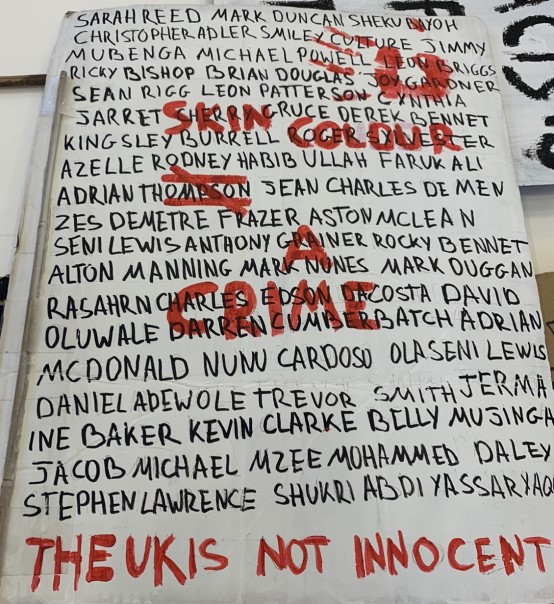 For my research I focused on the idea of ‘Protest, Power and Posters’, identifying how the art and cultural medium of posters and other types of ephemera highlight and capture contemporary race issues. Furthermore, how certain themes and messages in these ephemera have sustained and been reproduced throughout Oxford’s history of protest all the way to the present. I was able to look through the Anti-Apartheid Movement (AAM) archives, the Joint Action Commission Against Racial Intolerance (JACARI) archives and Rhodes Must Fall 2.0 posters from this summer.

A theme that I also wanted to highlight within my research was British complicity in the mistreatment of black individuals.

The poster above, created for a 2020 Black Lives Matter protest in Oxford, details black British individuals who have had their lives taken by violence and institutional brutality. I was particularly drawn to this poster, as it forces us to recognise a global issue or an ‘American’ issue as a national and local one as well, instead of painting Britain as a society where anti-blackness doesn’t exist. 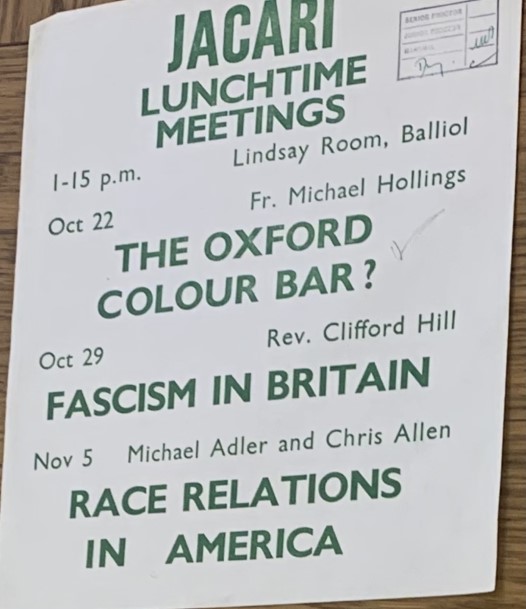 An episode of Oxford’s race history that really interested me was the ‘Colour Ban’ in the 1950s and 1960s, enacted on POC (people of colour) Oxford students. This was brought to the public’s attention as JACARI, the largest student organisation at that time, published a report in 1963. This report featured the statistic that 62% of landladies had stated that they would not lodge African/Asian students. The poster on the right advertises a lunchtime discussion group to discuss this matter alongside other issues associated with race relations such as Fascism in Britain. Both of these posters highlight the need to continue to address Britain’s own race issues as part of global anti-blackness and not cast them aside as an American problem.