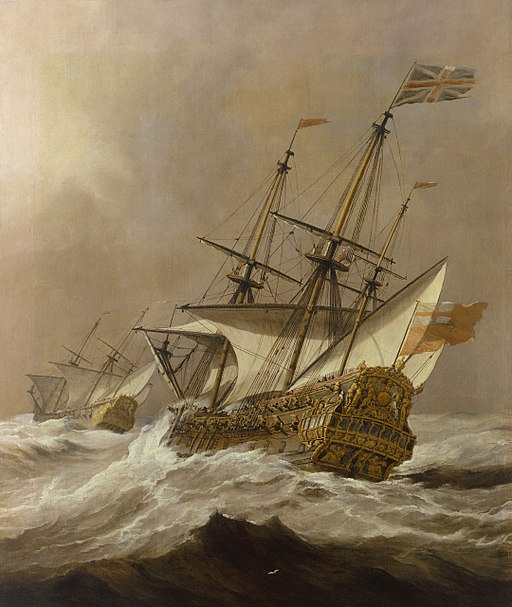 We embark’d on board the Dreadnought Captain Sharp Commander […] After a pretty difficult Voyage we came in sight of Land & coasted round the shore & found it to be an Island […] The Country was so cover’d with thick wood that we could make no judgment of it nor indeed was it easily accessible. We travelled pretty far into the island clearing our way […] but without meeting much as the trace of any Inhabitant till about the middle of the Island […] we found a Castle upon a very high Eminence. The Castle was all built of Wood of different kinds curiously inlaid one in the other & Furniture was partly made of straw & partly of Feathers which last as we afterwards found is what the Inhabitants are dressed with.

Who was Captain Sharp? Also a mystery. The possibility that he was Bartholomew Sharp, privateer, pirate and Pacific voyager, is tantalising, although it would be an unexpected career choice for James Hyde, the son of the Lord Chancellor of England. If it’s privateer/pirate Bartholomew Sharp, it could place this island somewhere around the coast of South America where he was active in the late 1670s. The Dreadnought, meanwhile, could be this Royal Navy third-rate ship of the line (like the HMS Resolution pictured above) that was in service in the 1660s-80s. It was just one of a series of HMS Dreadnoughts, but that lends some credence to the note writer’s guess that the letter is from this period. Iit would also mean, sadly, that the Captain Sharp of the letter is not the famous Bartholomew.

The mystery sailor moves on from describing the island to describing the people. He is, predictably, very interested in the sex lives of the inhabitants, and this is where a reader might just start to doubt that the letter is genuine. This island invader learned, perhaps, a little too much about the inhabitants’ marriage customs:

We learnt that the Inhabitants live entirely in the Woods, except when their Wives lye in if one may call them Wives for there is no marriage among these people but when in consequence of the acquaintance they make with each other in the woods Females prove pregnant then the Lover & the Lady travel […] and by their own skill erect their Castle in which She & her Children inhabit till such time as they can make their way in the world & then they leave her & she returns to her wild kind of Life & perhaps never sees them more nor Lives more in a house unless […] some new acquaintance in the Wood engages her in a new Family

The writer continues with a tragic story:

It is remarkable that these people are generally singing. They live upon Fruit & drink only Water. They did not offer to oppose our settling in their Island but would make no alliance with us & we found the reason of that was that several Friends of theirs trusting to the humanity of strangers had been made prisoners all their Lives & others put to death & torn piecemeal. They retir’d to their thickest Woods immediately upon our approach […] beside the inhumanity of the action we have no provocation to molest them.

So at least this tale doesn’t end with a bloody massacre, and hopefully not with an epidemic, either, although the prospects for these islanders were not good, as the sailor ends:

This is the short Account my time will allow me to send you. You will very shortly see the Captain’s Journal published at length by which it will appear how much this new discovered Island may contribute to the felicity of Great Britain.

A real letter from the Age of Discovery, or a colonial, literary fantasy? A mystery from the Clarendon collection.