“Evening all, from home in Perthshire”

Desmond Carrington (23 May 1926 – 1 February 2017) was perhaps best known for his successful BBC 2 radio shows: All Time Greats and The Music Goes ‘Round. When he retired in October 2016 The Music Goes ‘Round was still attracting more than 800,000 listeners’ according to The Guardian’s obituary. 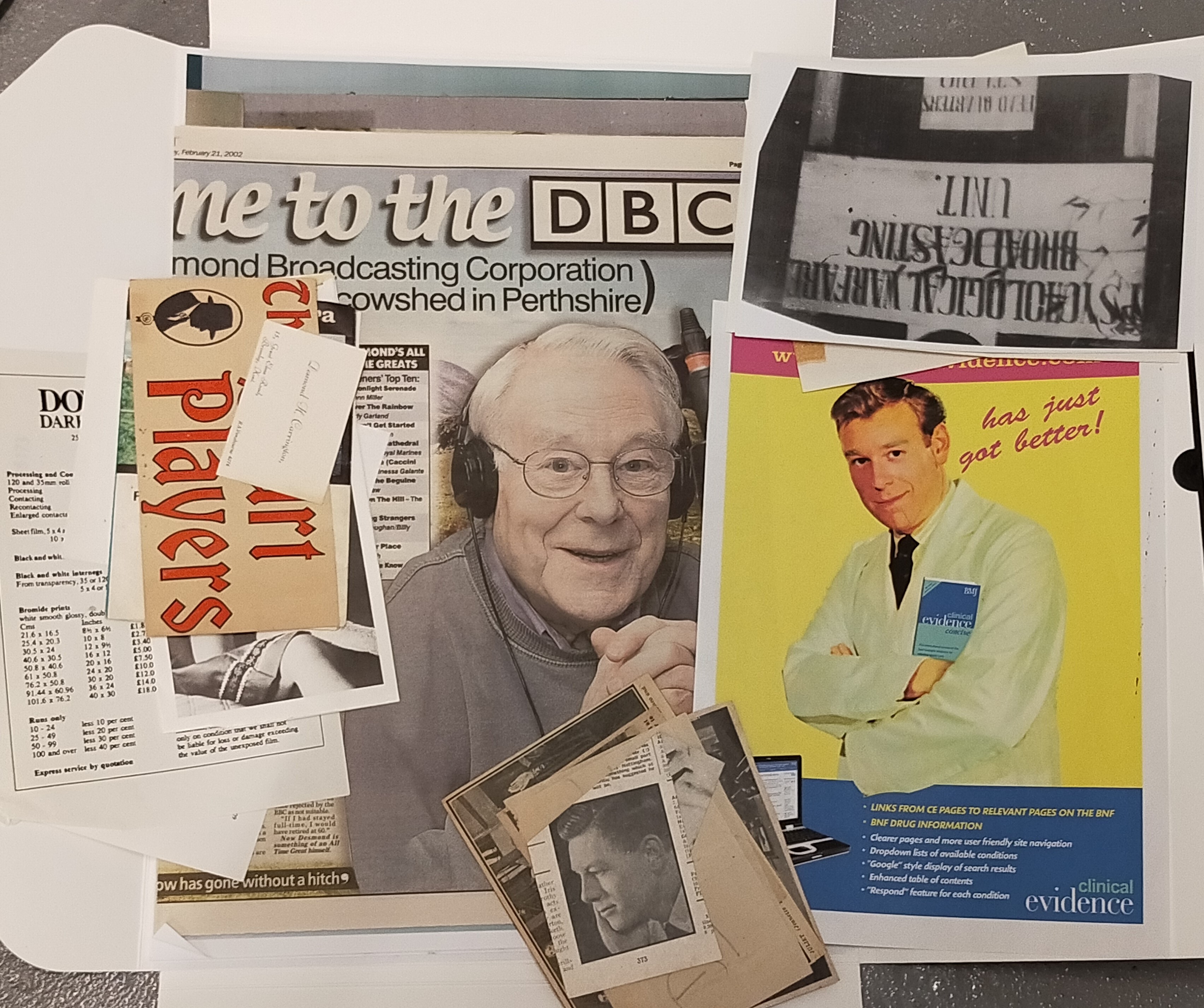 To some, though, Carrington was better known as the first heart-throb doctor of one of Britain’s first ever soap operas: Emergency Ward 10, a TV medical drama which ran on ITV from 1957-1967. Shows like Casualty and ER would follow suit.

In 2019, Carrington’s partner and producer, David Aylott, donated all of Carrington’s old scripts, programmes, publicity material, and a vast amount of photographs to the Bodleian Libraries. This collection spans his entire life from childhood, including his time as a soldier during the Second World War, a busy acting career, and finally his move behind the microphone hosting his own radio show. The catalogue for the archive received to-date has now been made available in Bodleian Archives & Manuscripts. In the future the actual recordings will also be added to the collection.

Most of Desmond Carrington’s career was dedicated to his popular radio shows All Time Greats and The Music Goes ‘Round, so it is no surprise that a vast quantity of the collection consists of years upon years upon years of radio scripts, production details, and publicity.
The scripts reveal Carrington’s eclectic, and sometimes eccentric, taste in music, from Bucks Fizz, Elvis Presley, Judy Garland to… Star Trek! An array of genres and artists which must have inspired and broadened listeners’ musical tastes and knowledge (MS. 18901/48). 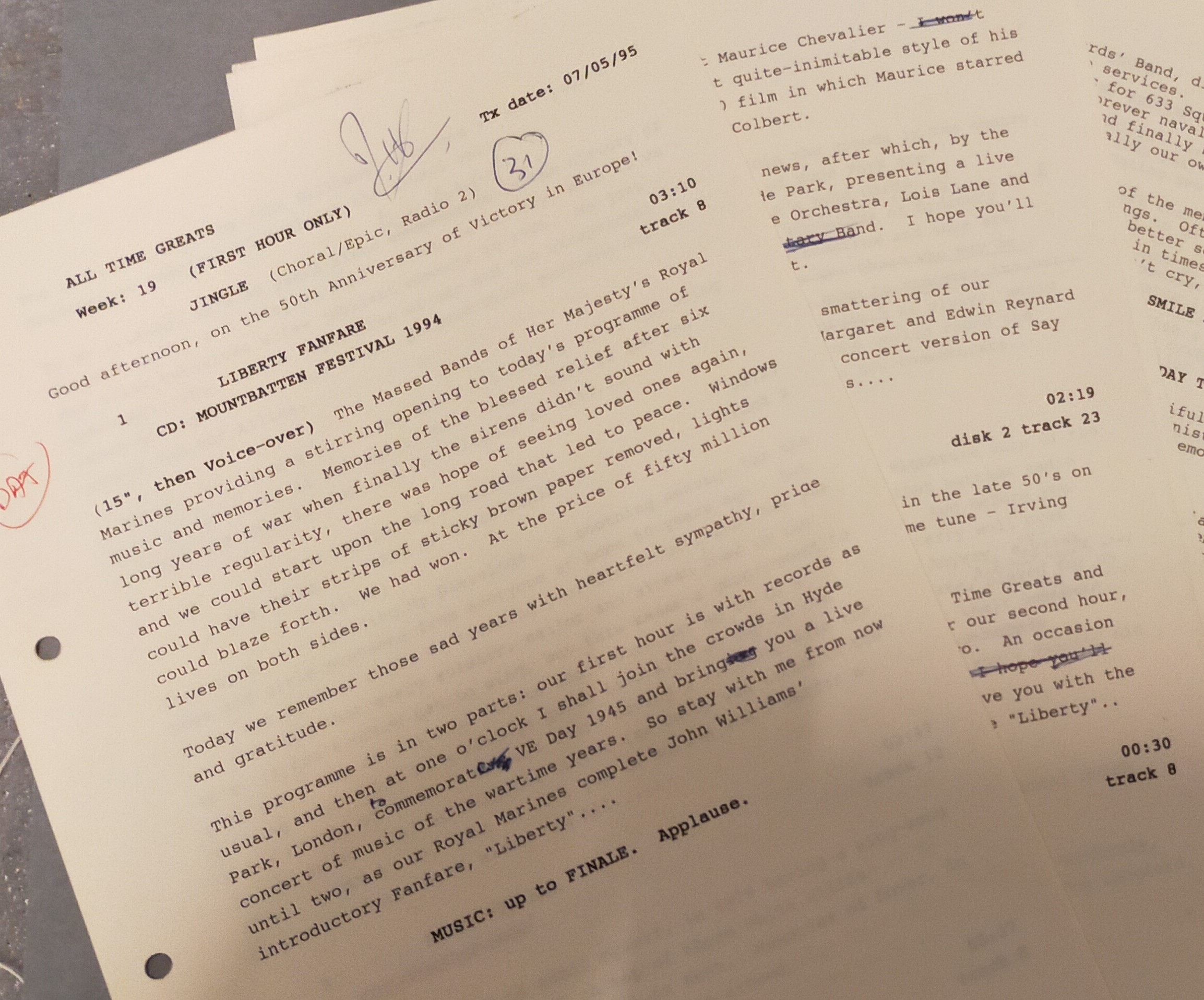 Occasionally, Carrington would have themed shows. For the 50th anniversary of the Allies’ victory in the Second World War, something quite personal to the former WW2 officer, he played a range of war-themed songs (see MS. 18901/40 above). These included Vera Lynn’s ‘I’m sending my blessings’ and Segue’s ‘I’ll never smile again’, with the Welsh Guards playing out the episode with an instrumental British medley.

After three decades of entertaining on the radio airways, Carrington retired and hung up his headphones for the last time on the 28th of October 2016. Truly the end of an era.
He marked his final show of The Music Goes ‘Round (MS. 18901/104), which ran from 2004-2016, with the same song that he opened it with all those years ago in 1981 on All Time Greats: ‘Up, Up, Up and Away’ by the Johnny Mann Signers. Mel Torme’s ‘That’s All’ was his final swan song.

There is something quite moving about a man in his shed, with his cat (Sam), just playing his favourite songs for his dedicated listeners every week.

And always with a fond goodbye from him and ‘Golden Paws’ Sam:
‘Bye just now!’ and ‘…of course, thank you for having us at your place’.