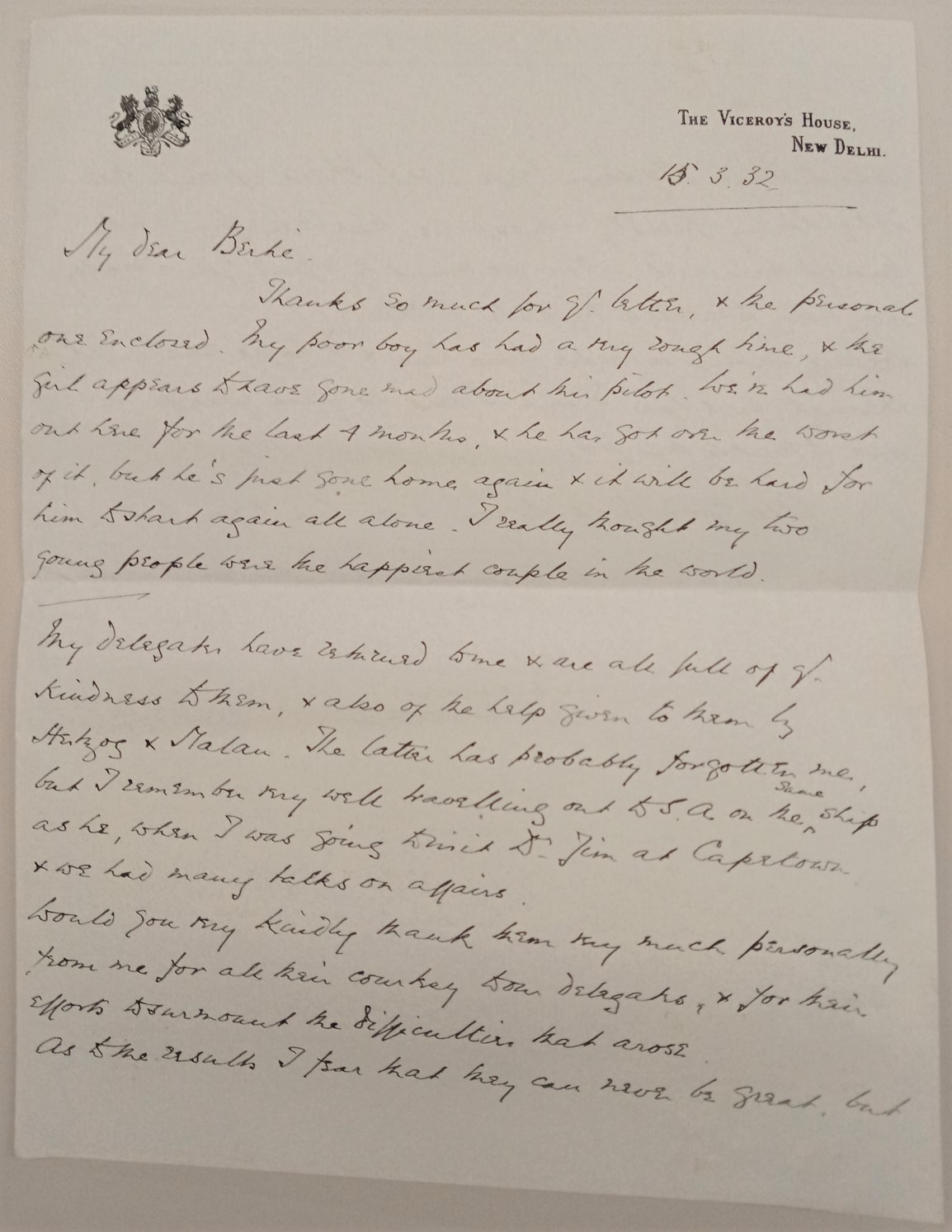 Letter from the Viceroy of India to the 6th Earl of Clarendon, 1932 [click to enlarge]

writes the Viceroy of India to his friend the 6th Earl of Clarendon in a letter of 15 March 1932:

Thanks so much for your letter, & the personal one enclosed. My poor boy has had a very rough time, & the girl appears to have gone mad about this pilot. […] it will be hard for him to start again all alone. I really thought my two young people were the happiest couple in the world.

When I read an opener like that I lean in for the whole story: please continue, Viceroy! But that, sadly, is all he divulges about the girl or her pilot.

Luckily, it was not difficult to find out more.

The ‘poor boy’ was the Viceroy’s son, Inigo Freeman-Thomas, and the girl was Maxine “Blossom” Miles. And she, it turns out, led an absolutely fascinating life.

Maxine Miles, known as Blossom, was born in 1901 into a family of acclaimed actors. Her father was Sir Johnston Forbes-Robertson, a trained painter, the best-regarded Hamlet on the Victorian stage, and a sometime model for Dante Gabriel Rossetti and Ford Madox Brown among others [DNB]. Her mother was the American actress Gertrude Elliott who in 1908 was a founding member of the Actresses’ Franchise League to fight for women’s right to vote. Blossom was missing one eye from birth (according to Barbara Cartland – romance author Barbara Cartland – who made her social debut in the same year as Blossom) but that did not hold her back. Raised with her three sisters in a wealthy, artistic home, her intellectual, sporting and artistic gifts were allowed to flourish.

Blossom was one of the bright young things of the 1920s, a Bloomsbury-raised debutante and party-going socialite. And in 1924, she took the conventional debutante plunge and married Inigo Freeman-Thomas, the son and heir of Freeman Freeman-Thomas, 1st Marquess of Willingdon (who was Viceroy of India from April 1931). Her fabulously rich American aunt Maxine Elliott, also an actress, gave Blossom a wedding present of $500,000, and with that magnificent gift, the couple indulged their passion for flying.

…And this is where it all went wrong for the Viceroy’s two happy young people, because Blossom fell in love. She fell in love not just with aircraft, but with their flying instructor, Frederick George Miles [DNB].

Frederick Miles (b. 1903), known as Miles, had a wildly different background to Blossom. He was the son of a laundry owner and left school at 13 to open a motorcycle rental/electrical engineering business. He became fascinated by aircraft and in the early 1920s he joined up with some friends to design and build a small biplane which they named the Gnat. He didn’t even know how to fly at this point; he was taught by his new business partner, Cecil Pashley, after they started up their flying school and joyriding business at Shoreham airfield.

In February 1931 Blossom and Inigo happily commissioned a new monoplane with a grand plan of flying to India, and ten months later the New York Times reported their separation. Frederick Miles, their flying instructor, was named as a co-defendent in this international scandal of a divorce suit. After first fleeing (literally flying) to South Africa, Miles quickly returned to England. He and Blossom married in 1932. 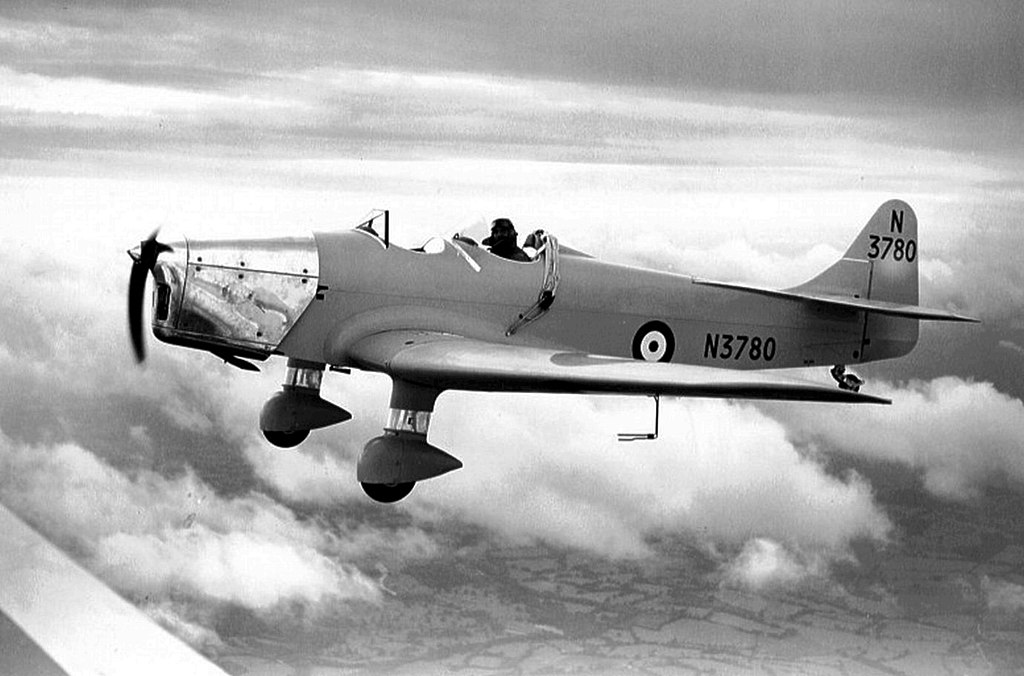 That was only the beginning of their story. The new couple, one a mathematically-inclined former viscountess and the other a self-taught engineer, moved into a caravan together. Miles did the cooking and Blossom did the washing up, and Blossom talked Miles into designing a plane [1].

Together, they developed the Miles M1 Satyr, and then in 1933, the Hawk (with Blossom, as a mathematician and draughtsman, doing the stress analysis). The Hawk was faster, cheaper (only £395!) and simpler to use than the then most-popular private plane, the De Havilland Moth, and it was such a success that Miles was hired as the technical director and chief designer of the company that built it, Phillips and Powis, while Blossom became a company director.

In October 1934 the company’s Falcon broke the light aeroplane record for a flight from Australia to England, and in 1935 Blossom designed a plane for Miles to fly in that year’s King’s Cup air race, the Miles Sparrowhawk. In 1936 Charles Lindbergh asked Miles to build him a light aircraft which became the Miles Mohawk. Another of their planes, the Miles Magister, was the standard training aircraft for the Royal Air Force throughout World War II, and as part of the war effort, Miles and Blossom founded the Miles Aeronautical School to train teenagers, including young women, as technicians and draughtsmen. It lasted until 1948, with Blossom directing it.

She also served as one of five commissioners of the Civil Air Guard, founded in 1938 to encourage more people to fly and to act as a military reserve, and she was a member of the Women’s Engineering Society. Miles, meanwhile, having started his career building biplanes, ended his career designing jets and flight simulators. They had a long and apparently very happy partnership. Miles died in 1976, and Blossom in 1984.