The Botanic Garden celebrates its 400th birthday on 25 July 2021, marked by the current Bodleian Library exhibition ‘Roots to Seeds’  https://visit.bodleian.ox.ac.uk/event/roots-to-seeds. The Garden itself has changed over the four centuries since it was founded in 1621 (as the Physic Garden) and its fortunes have fluctuated.

By 1834 it was in a pretty bad state. Charles Daubeny was elected Sherardian Professor of Botany early that year and one of the first things he did on becoming Professor was to launch an appeal to raise money for the Garden. Daubeny had taken over a space which he felt was no longer fit for purpose and which he wanted to restore to ‘the character which it possessed a century ago’.

Daubeny wrote a report to the Visitors of the Garden, the body in charge of it, on 14 March 1834 setting out the problems, along with a detailed discussion of what was needed to put things right. The accompanying ‘Plan of the Botanic Garden with the projected additions’, by Henry Jones Underwood, showed the Garden as it was along with Daubeny’s proposed improvements. 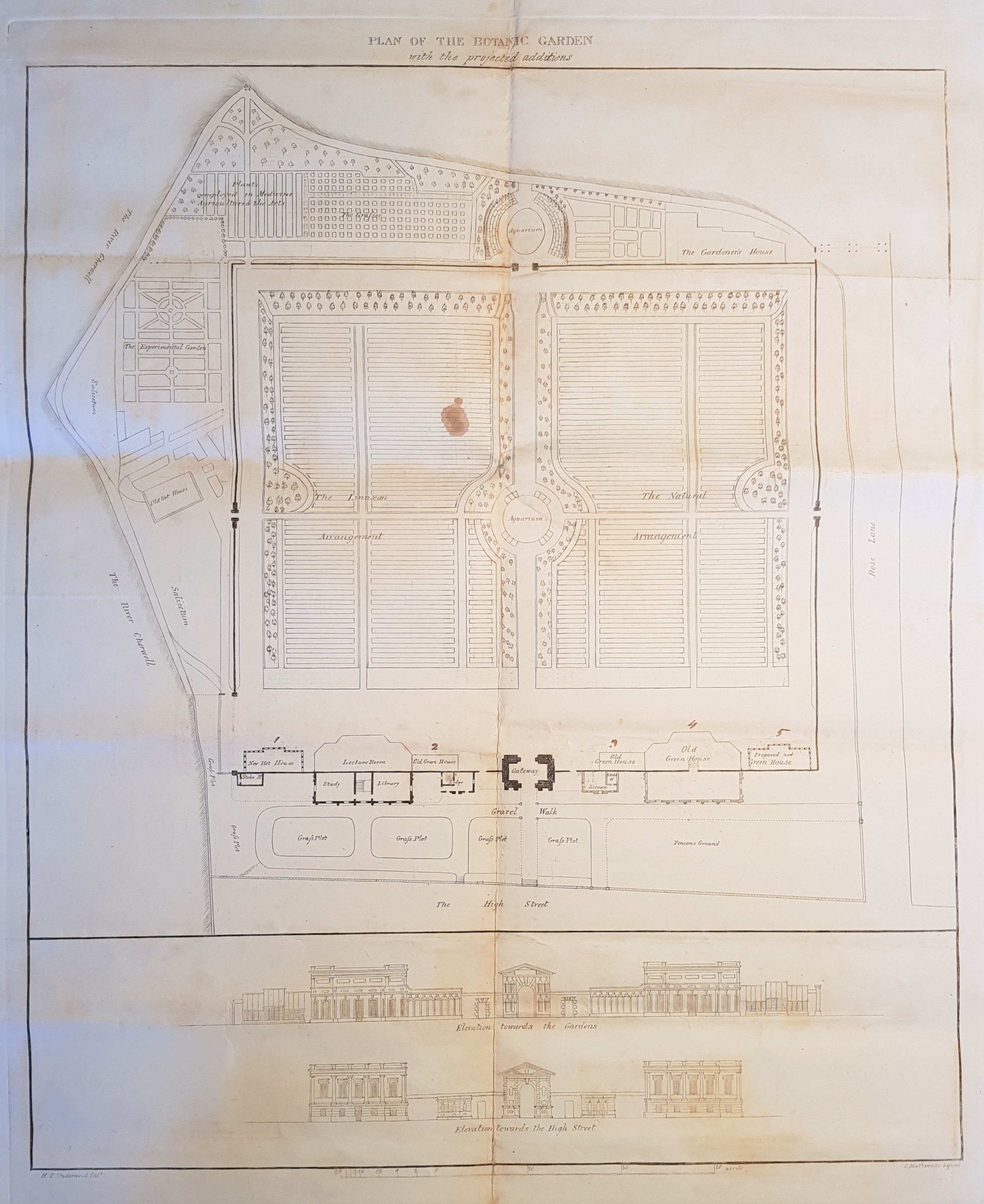 Plan of the Botanic Garden with projected additions by HJ Underwood

Alongside basic improvements such as better soil and the removal of vermin-ridden greenery, Daubeny wanted to expand the Garden and create new areas within it. He planned a new garden (where the Gin Border is now) for ‘plants used in Medicine, Agriculture, or the Arts’; and an ‘Experimental Garden’ for ‘ascertaining the effects of soils, or of chemical agents, upon vegetation’.

His most damning criticism was directed at the buildings in the Garden. The greenhouses, built over a century ago, when ‘the mode of constructing Greenhouses was but ill understood’ were ‘extremely ill-constructed for most kinds of plants’. The Stovehouse was ‘so miserably constructed, that all hopes of cultivating rare and curious Exotics… must be abandoned’. In such bad repair, he recommended they simply be pulled down. Other buildings desperately needed remedial work; the bedrooms in the gardener’s cottage were extremely damp on account of being ‘contiguous to a stagnant ditch’.

Daubeny proposed a range of new buildings including new greenhouses, a lecture room and a new library for the books in the Professor’s study space (themselves significant collections of historical importance which were going mouldy from being stored in a converted greenhouse) as well as for the collections of ‘dried plants’ which he saw as being equally important teachings aids as the living plants in the Garden.

A subscription committee was formed to organise the fundraising. So committed was Daubeny to the appeal that his name appeared at the top of the list of those subscribers who had already pledged money, personally donating £100 (over £13,000 today). The subscription raised enough money to make significant improvements to the Garden, but as Daubeny later reported back to the subscribers, there was still so much left to do that he donated another £100 of his own money. 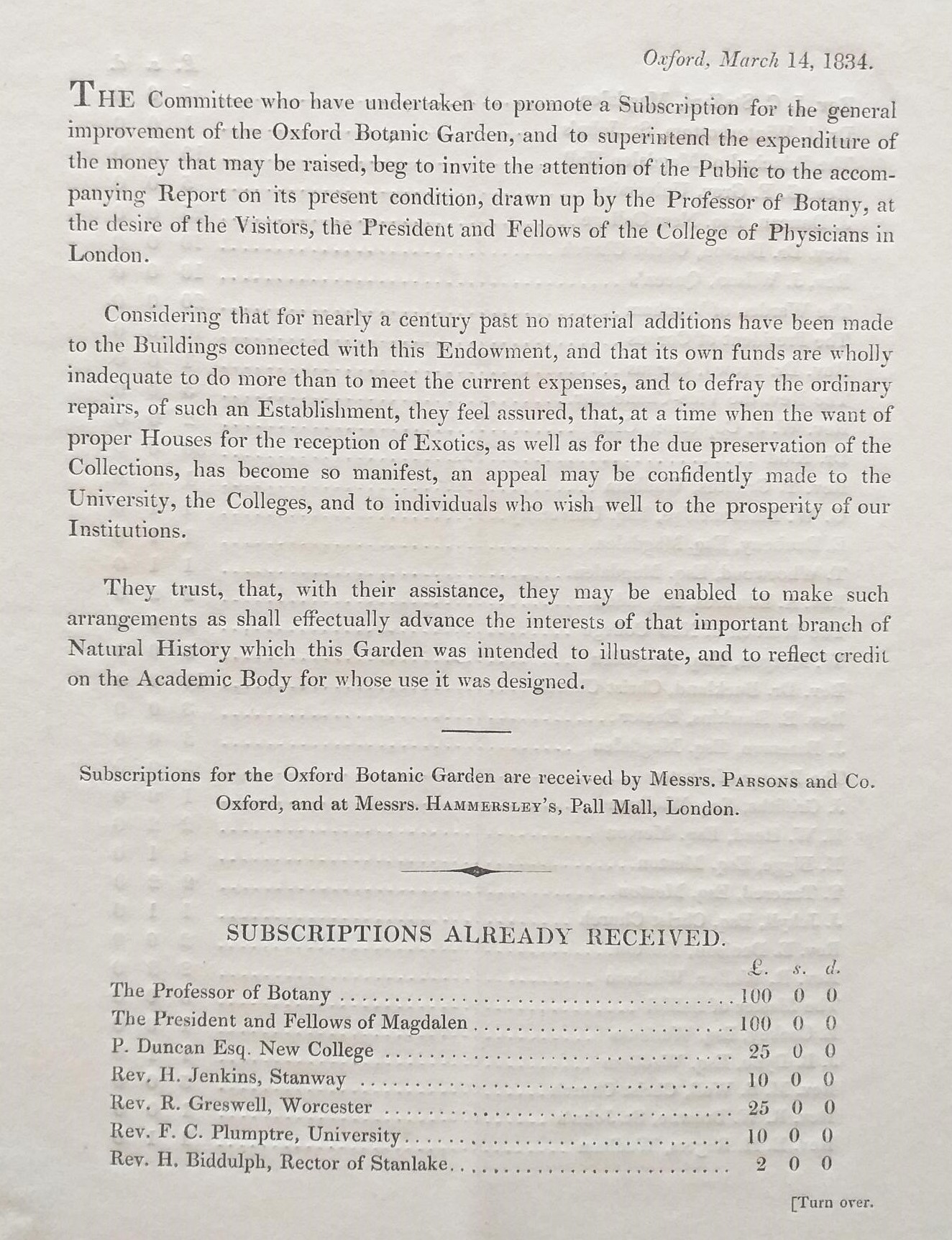 Letter to subscribers to the Botanic Garden appeal, 1834

Once the improvements were in place, the Garden flourished, even after the new museum (now the Natural History Museum) was built in the Parks in the 1850s as a centre for the sciences. Daubeny and botany had stayed in the Garden. But within twenty years of Daubeny’s death in 1867, the study of botany had declined yet again. Those sciences based in the new museum were prospering whilst the Garden was not. It took further improvements and yet more investment in the Garden to bring it back to life.